The brand once known for tail fins and supercharged V-Series engines plans to leave this decade as a builder of electrified vehicles. We recently learned Cadillac is winding down development (not production – there’s a difference) on its internal combustion engines, meaning the models and trims currently on sale are the last of a breed. Going forward, the brand named after the man who literally founded the city of Detroit is going to be powered solely by electrons.

First out of the gate will be Cadillac’s first fully electric SUV. Called the Lyriq, it’ll be a crossover-type vehicle with a new take on the brand’s design cues, packing available Super Cruise and the ability to drive an estimated 480 km on a single charge. Plans call for it to appear in Canadian showrooms next autumn with reservations beginning about a year prior to that time.

But what about the technology behind all this? GM has gone all-in with their Ultium brand, applying the name to batteries and drive units it will use in these systems. Speaking to the latter, all of the company’s next-gen EVs will powered by a family of five drive units, together known as Ultium Drive. There will be front- and rear-wheel drive units, a so-called ‘assist’ all-wheel drive, plus two for trucks. Names for the latter are revealing of future plans, since they are referred to as ‘truck front-wheel drive/rear-wheel drive’ and ‘truck dual motor’, respectively.

These five drive units will work in concert with electric motors to get power to the ground. GM says they expect to use one or more of three motors – a primary front-wheel drive motor, a primary motor which can be configured for front or rear wheel drive, and an all-wheel drive assist motor.

So that’s propulsion. What about energy storage? A common knock on electric cars by those who’ve never driven one is the fear of running out of juice while cruising the back forty. Many advancements have been made in this area, by a variety of battery makers, including the tech being developed by GM. In fact, the company claims their Ultium-based EVs will be capable of driving ranges of up to 724 km when fully charged, a distance to rival any traditionally powered car packing a full tank of fuel.

In another neat innovation, engineers on the Ultium project say they’ve fandangled an innovative way to stack cells in a battery.  The platform apparently has the unique flexibility to use pouch cells stacked either vertically (pickups and SUVs) or horizontally (performance vehicles), allowing them to use similar building blocks in different ways to make a variety of electric vehicles. Think of it as stacking hardcover books on a shelf upright versus lying down. One orientation permits different heights of books, while the other allows for different widths or lengths. Also, compared to the current-gen Bolt EV, these batteries weight 25 per cent less. 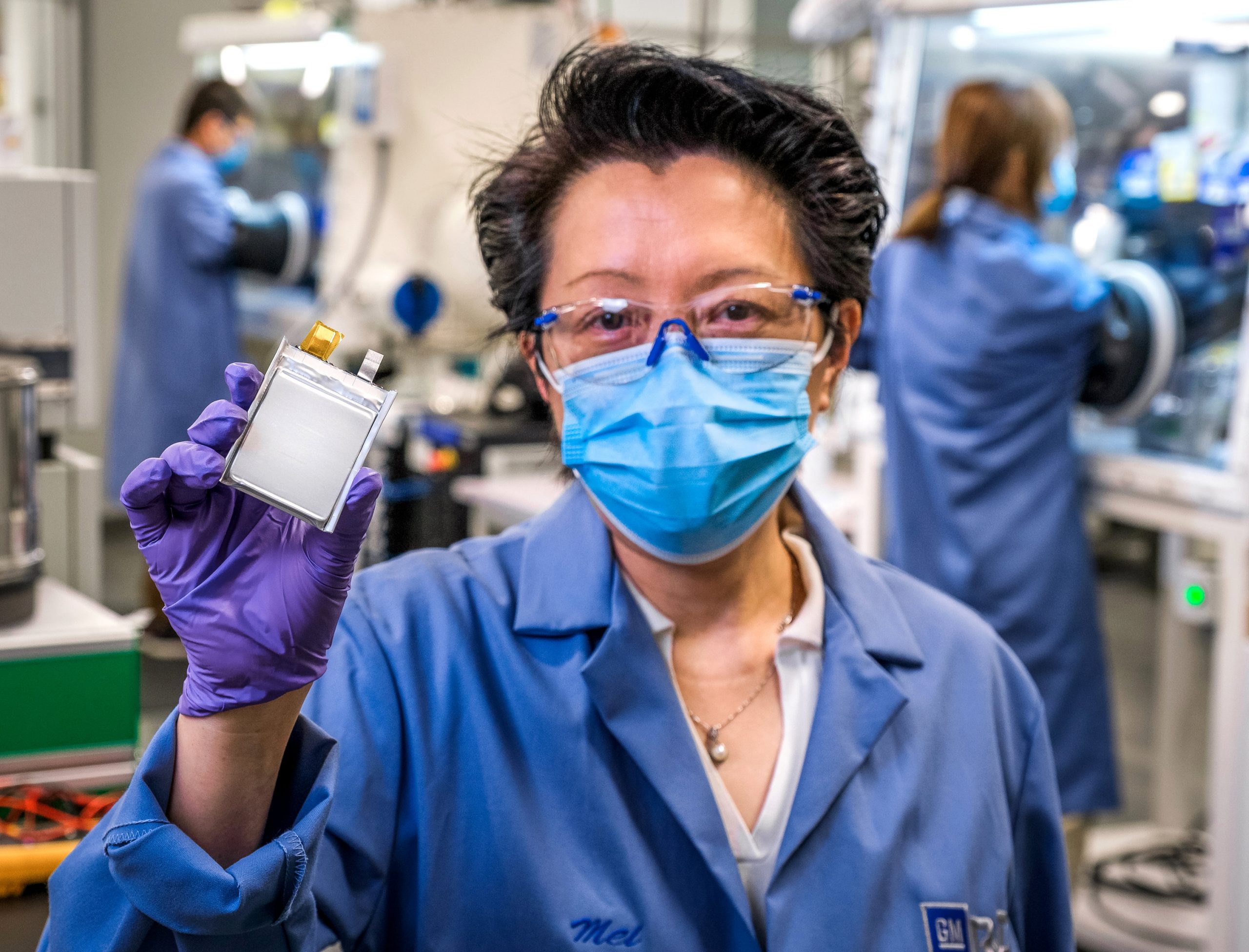 General Motors is already at work on the next evolution of its Ultium battery cells. GM R&D Lab Group Manager Mei Cai, PhD, displays a working prototype of a battery cell with a lithium metal anode, a significant step on the path to remarkable energy density breakthroughs, with even more power and range at lower costs. This cell has already completed more than 500 deep charge/discharge cycles. (Photo by Steve Fecht for General Motors)

GM is touting their battery management system as being almost completely wireless, reducing connections within the batteries by almost 90 per cent. This explains some of the weight savings. With this tech, more room is available for more cells (or ones of different design), providing better driving range. There is also talk of this innovation furthering the ability to repair and replace parts of the battery ecosystem in an EV; fewer parts means potentially easier servicing and perhaps even the ability to swap out portions of the system late in the car’s lifecycle. GM says the system could even be upgraded over time with new software-based features via smartphone-like updates. Plans are also in the hopper for extensive recycling and recovery programs.

There’s plenty of work to go around. The company has announced it will increase its EV and AV investments from 2020 through 2025 to USD $35 billion, representing a 75 per cent increase from its initial commitment announced prior to the pandemic.