Bugatti Shows Off All Three Models in Dubai

The Trilogy Of Modern Bugatti

Bugatti’s helping us to forget about the outside world by digging into the corporate archives to show us some amazing photoshoots from their past. When you have cars that are among the fastest in the world, and you’ve been doing that since the 1990s, you can stage some pretty impressive images. Like this one that brings together each of the company’s three models, showcased in front of the Dubai skyline.

All-wheel drive, four turbos, and a monocoque chassis that’s crafted from carbon fibre. Those are things that all three of the modern iteration of Bugatti’s cars have in common. While we won’t call it the holy trinity during Lent, that sentiment isn’t far off. The EB110, Veyron, and Chiron are some of the most impressive feats of engineering to ever put rubber to pavement, and to have one of all three together at once is a rare thing indeed.

First up is the EB110, named for the 110th birthday of original company founder Ettore Bugatti. It was revealed on that day, in 1991, and was the first series-production car to be built from carbon fibre. Impressively exotic materials, especially for the time, included titanium bolts and magnesium wheels. Under the rear engine cover is a 3.5L V12 with four turbos making well over 600 hp. it could hit 100 km/h in 3.3 seconds and 351 km/h on the top end. Only 96 EB110 GTs were made, plus 40 EB110 Super Sports that were lighter and quicker.

Then came the Veyron 16.4, and the rebirth of the company in the hands of the Volkswagen Group. Using those massive corporate resources and record amounts of hubris, the company built a 1,000 hp hypercar that could top 400 km/h. That’s thanks to the unique W16 engine and a healthy dose of turbocharging in a car that was as luxurious and finely crafted as it was quick. Later, even more powerful Super Sport versions made 1,200 hp and could hit 431 km/h with enough room, fuel, and tire.

And the latest, the even more stupefying 1,500 hp Chiron. A car that looks fantastic, generates more torque than an average tractor-trailer, and can hit 300 km/h from a stop quicker than an average 1990s sedan could get to 100. It has a top speed of 420 km/h, limited by the durability of the tires on the car. Under special conditions, the car topped 490 km/h, the first car to reach that speed. 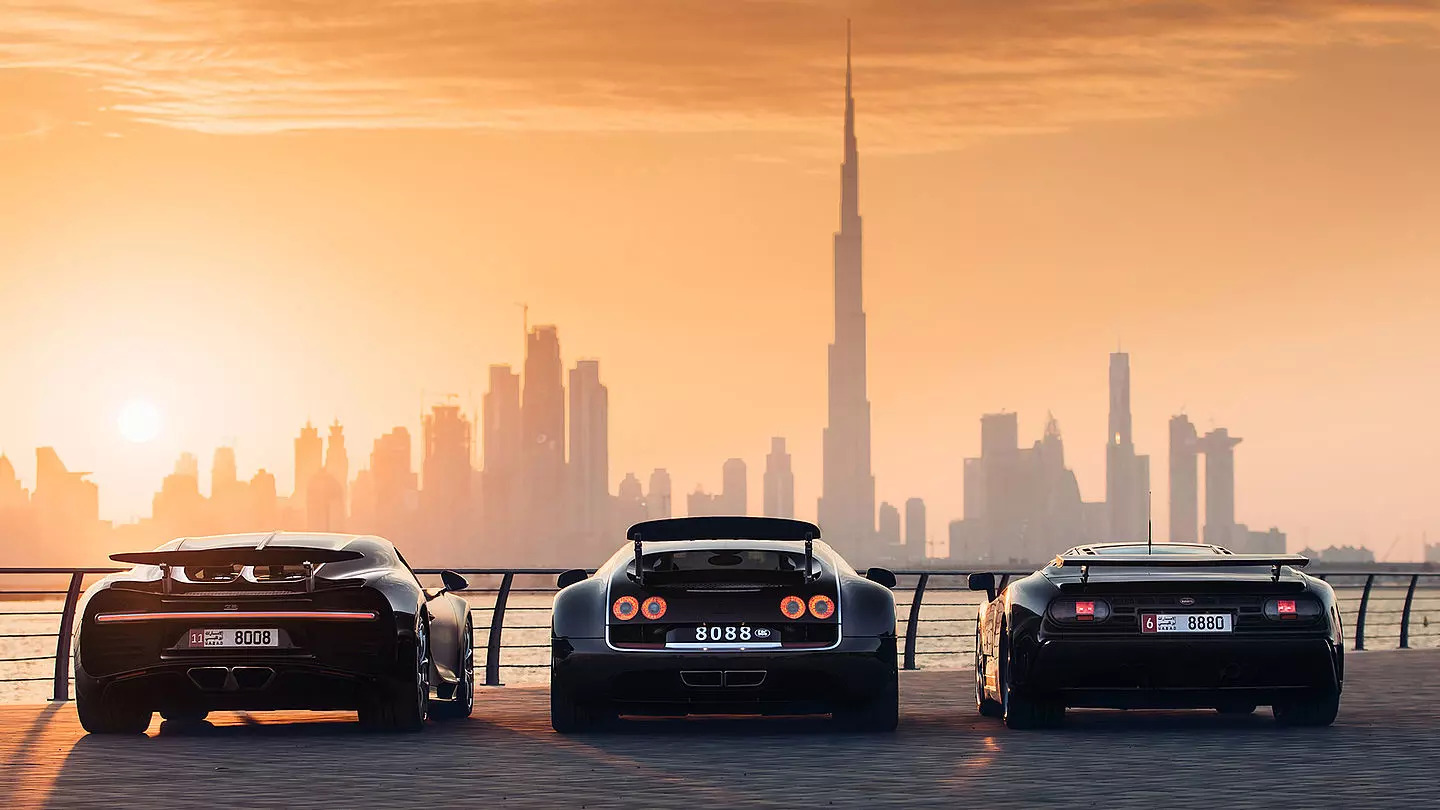 The cars are shown prominently in front of the Dubai skyline, with the Burj Khalifa, Princess Tower, Almas Towers, and more of the hundreds of high-rises that give the city on the edge of the desert one of the most recognizable skylines in the world. All in what looks to be the same shade of black paint, too, an even more surprising accomplishment than just having all three of these special pieces of machinery. 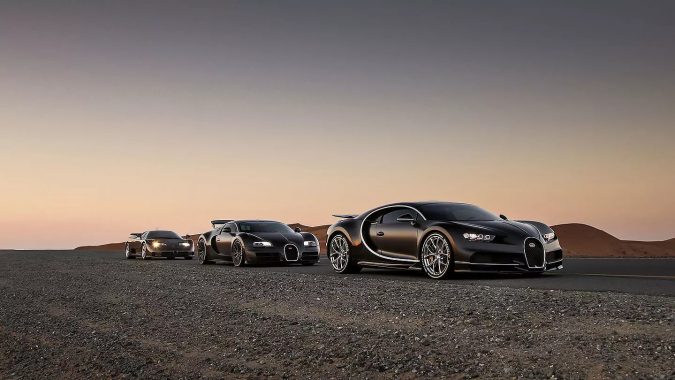 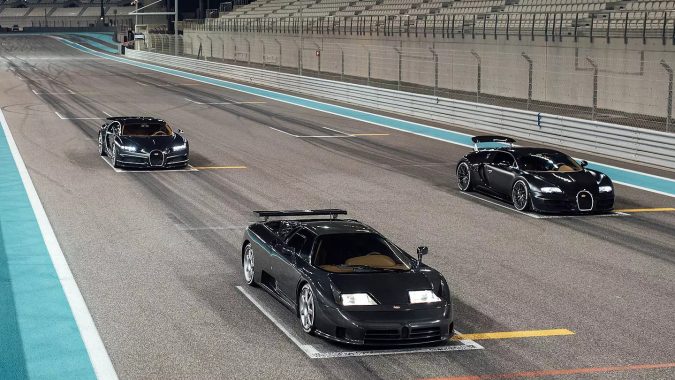 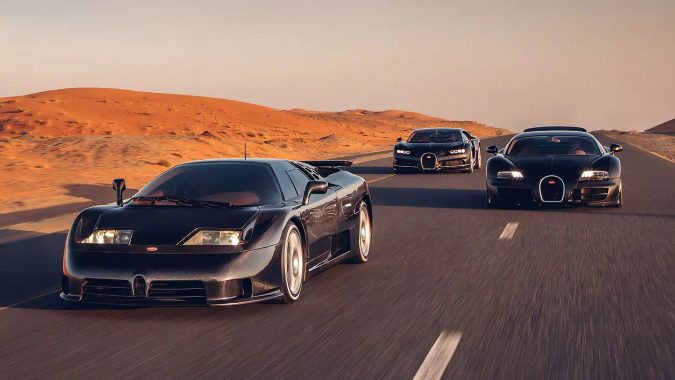 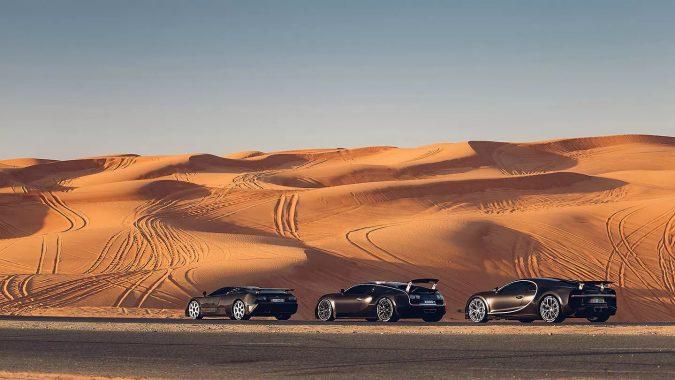 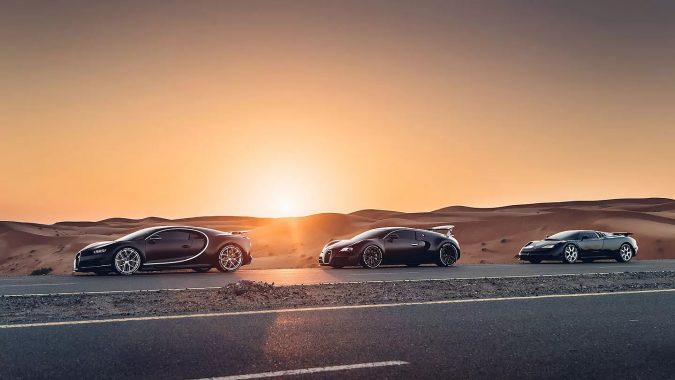 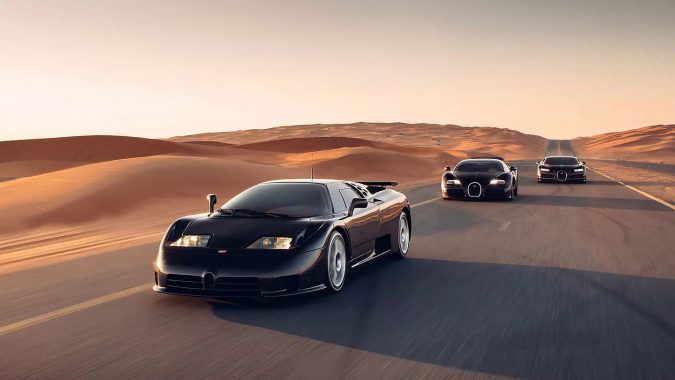