I have just finished reading Jeff Gordon’s new book “Jeff Gordon: His Dream, Drive & Destiny,” by Joe Garner and I recommend it highly. It would make a great Christmas gift for any race fan in your family and is available at Indigo, Chapters and Amazon and from Gordon himself at http://store.jeffgordon.com , It retails for between $40 and $45, plus tax.

So endeth the commercial.

For me, it was a hard book to read. That is not a contradiction; it is a really good book but there are some things in there that are tough to take, that make you shake your head and wonder how in the world some of the things that happened to him in his childhood could have happened.

He lays bare his soul over the breakup of his first marriage to Brooke Sealey. There was heartache, yes, but there was also liberation, in that for the first time in his life – and he was in his 20s at this juncture – he was finally his own boss and could do what he wanted, rather than what he was ordered to do by his parents or his wife.

The book leaves you with some questions, though, such as why he wasn’t prepared to do time in the minors before going to the IndyCar big league but was content – it seems – to take time to work his way up to the Cup level in NASCAR

You are left wondering how he could be so aggressive and competitive as a young man and as a young stock car racer, considering he was completely dominated by adults.

And nowhere does he mention the famous “Trading Paint” television promotion at Indianapolis in 2003, in which he drove a Formula One car for a couple of hours and then-F1 star Juan Pablo Montoya drove his stock car. Many journalists believed it was a test-in-disguise, which was all but confirmed by F1 team owner Sir Frank Williams later when he said he’d love to have Gordon but that he was too expensive.

One surprising thing I learned, in what was a bit of a throw-away line, is that he had an offer to race in Formula 3 in Europe for none other than Sir Jackie Stewart. Now, that would have been interesting. I get the feeling the offer might have come at a time when Gordon was under somebody else’s thumb or else his story might have been much different.

He’s a wonderful and talented racer who dominated in NASCAR. I believe he could have dominated in anything he chose to race – but we’ll never know.

If you want to know where Gordon gets his good looks, you need look no further than Page 16 of the book, where there’s a photo of him and his sister (he was a baby) in their father’s arms. Father then and son later are spitting images of each other.

But that marriage didn’t last long and Jeff’s mother married John Bickford, who became his stepfather. It all worked out in the end, but if it had been up to me at the time, I would have called the police on that guy.

A man who lived for racing, he had Jeff competing on BMX bicycles when he was 5. His mother was worried that it was too dangerous. So Bickford agreed that if she thought that way, Jeff wouldn’t race the bike any longer. So then he went out and bought Jeff a quarter-midget race car instead. Then he put him into go-karts. By the time he was 13, Gordon was racing a 410 c.i. sprint car against adults – the kind of car that just about killed veteran racer Tony Stewart two years ago.

If Jeff Gordon says it once in this book, he says it several times: he was frightened to drive go-karts and when he got into the sprint car he was petrified. His mother is quoted as saying he was scared to death. Gordon even goes so far as to say he wouldn’t make his own kids do what his stepfather made him do. 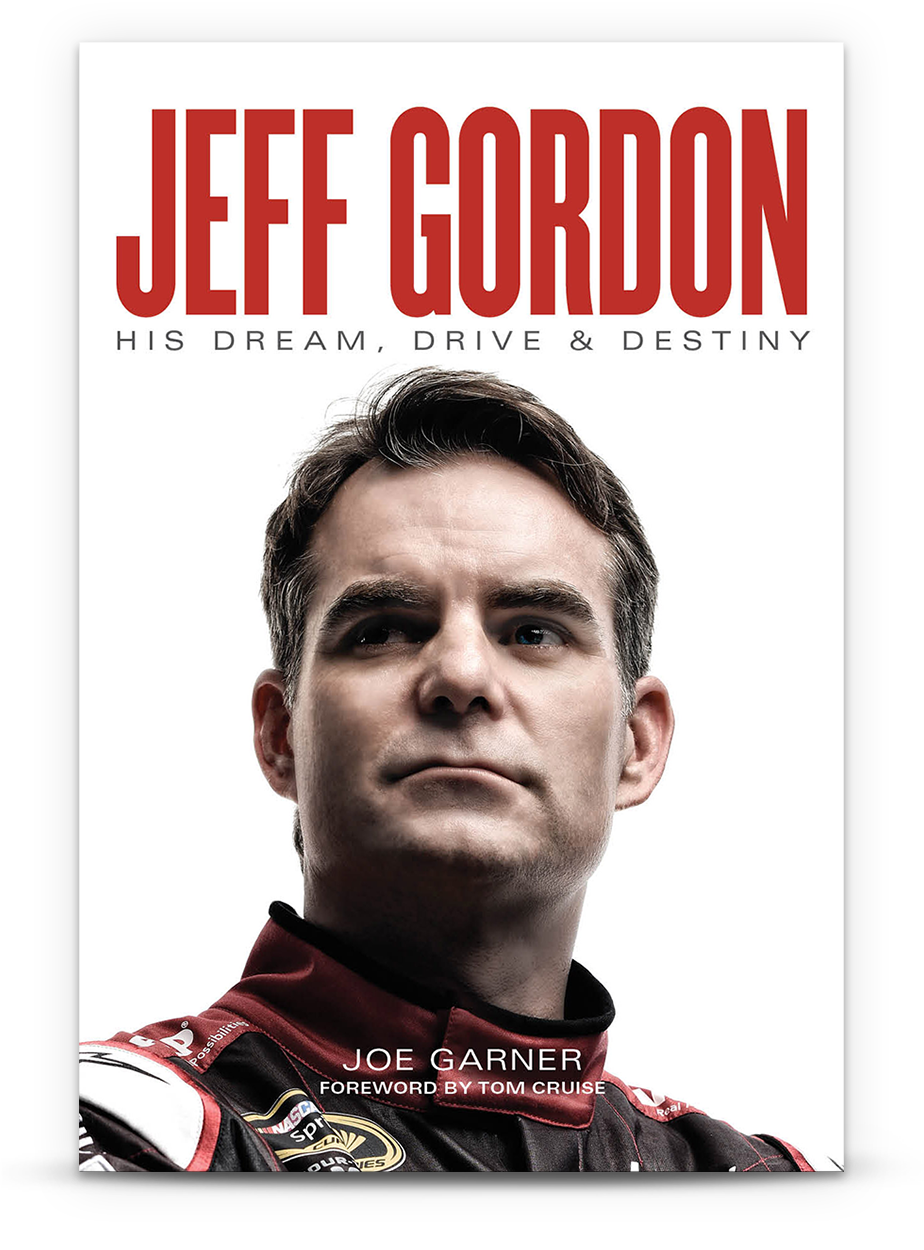 Bickford not only forced him to do things he wasn’t fussy about but fiddled in the background, as well. Gordon tells the story about how his stepfather told one sprint car owner not to pay Jeff if he finished in a race further back than third. To his credit, that owner refused.

Now, there’s no doubt – no doubt in the world – that Jeff Gordon was a racing prodigy. To be fair, what happened to him happens all the time to kids who don’t want to play hockey, or don’t want to practice the piano. Their parents make them do those things, too. The difference, however, is that no kid 6 or 7 years old child ever got killed playing hockey, or the piano. But every summer, somewhere, some child is killed karting or motorcycle racing that wasn’t their idea in the first place but that daddy thought was swell.

Look, anybody who’s read my stuff over the years knows that I don’t like children racing. Karting, for instance, is a fact of life, and I cover it and write about it because it’s part of the sport but that doesn’t mean I have to like it. I’ve been to too many kart meets and seen too many children who would rather be someplace else. Anywhere else.

I think that by the time a kid reaches the age where they can get a licence to drive a car on the street, he or she can decide whether or not to go racing. And if they are a racing prodigy, that talent will shine through and they will not have missed out on anything by waiting. Jackie Stewart was 23 before he drove in his first race. It was apparent from the moment he sat down behind the wheel that he was something special.

So I admit to my bias.

That Jeff Gordon got through all that without a scratch and, in fact, has never had a serious-enough accident to wind up in the hospital, is a miracle. More than a few of the great ones – Mario Andretti and Lewis Hamilton, to name a couple of others – have also enjoyed physical injury-free careers. Which is wonderful for them and for the sport.

And that he could fight his way through the fear is also a credit to him and his intestinal fortitude. I’m sure, like any performer, that Gordon the NASCAR champion, had butterflies before the start of a race. But the fear was gone by the time he was in his mid-teens and that was good because it allowed him to develop his talent. Some people think fear is a motivator and it is, to a point. But after that, it’s a hindrance.

Gordon says in the book that both Al Unser Jr. and A.J. Foyt told him that if he wanted to make money he should go to NASCAR but that if he wanted to spend money he could stick around and pursue an IndyCar ride, which might take him forever. I’m surprised by that – one of a number of surprises in this book.

Unser Jr. aside, you would think if anyone was going to give a talented, young, good-looking American a shot at the big time in an Indy car, it would be car owner Foyt, a legend in Indy car racing. But no. What’s unsaid in the book but is the truth nonetheless is that Foyt, like all the other IndyCar owners at the time, would rather take money from somebody to drive his car than to employ a driver he’d have to pay. So Jeff Gordon, who should have been in IndyCar racing, went south instead.

He went to the Buck Baker stock car racing school and says in the book that as soon as he got into a stock car and got it up to speed that he’d found his place in the world. “This is it,” wrote the man who’d won in open-wheel, open-cockpit sprint cars, midgets and dirt Champ cars. “I know what I wanted.”

But it wasn’t easy. We forget – or else didn’t know in the first place – that he crashed a lot his first couple of years. It took some lobbying by his friend Andy Graves (who learned a thing or two selling parts off his dad’s truck in the infield of Oswego Speedway in northern New York when he was a kid) to get Rick Hendrick to take a look. Graves, who’s gone on to do big things in NASCAR, worked for Hendrick at the time. Hendrick was so impressed that he literally begged Gordon to sign with him and even said he’d build a team around the youngster in order to land him.

Hendrick is no fool. NASCAR, at that time, had a bit of a national and international presence (primarily because of the Daytona 500) but was pretty much stuck in the U.S. South. There had been the odd northern driver who’d made an impression – Pete Hamilton was one – but nobody on whom you could build a business.

Hendrick looked at Jeff Gordon and saw talent, charisma, charm, sophistication and the potential to be a star. Jeff Gordon would be the driver/personality who would move NASCAR into the mainstream. Which is what happened. That’s not in the book but it’s there – if you read between the lines. How else to explain Hendrick’s enthusiasm for a young guy who, to that point, really hadn’t done much except crash a lot?

Also Read: Racing roundup: Is Hamilton that good? Jeff Gordon sure is

And he raced for two years in the Sprint Cup Series before he won his first race, the Coca-Cola 600 at Charlotte on Memorial Day in 1994. So it wasn’t easy. But then it all happened for him. He won the first Brickyard 400. He won his first of four championships. NASCAR exploded in popularity. He was in a Pepsi commercial on the Super Bowl broadcast. He became a devout Christian.

And then came the divorce. Out of the blue, he writes. You’ll have to read the book yourself to hear his side of the story. And you’re left hanging, a bit, because so many of the good things that happened to Jeff Gordon came to him while he was married to Brooke Sealey. If you read between the lines, she had a major influence on him and his career and – apparently – felt like she wasn’t getting as much of the credit as she’d expected. But this is his book. Maybe she’ll have to write her own.

After the divorce, he stopped praying as often and moved to New York and he and Jimmie Johnson, who was also single at the time and living in Manhattan, had the time of their lives. Gordon would finish a race, get into his jet, fly home to New York and go out to party till dawn. For the first time in his life, he didn’t have his parents and he didn’t have his wife and he more than made up for lost time.

It wasn’t all fun and games. He found himself on television, co-hosting Live with Regis and Kelly when Regis wanted a day off. He hosted Saturday Night Live. He wasn’t a NASCAR race driver any longer; he was a personality and a celebrity.

But then he met his second wife, Ingrid, and settled down to become a husband and father. He got involved in children’s charities and founded the Jeff Gordon Children’s Hospital, which is symbolic in itself. He survived his childhood and now is trying his best to make sure other children survive theirs.