Arjeplog, Sweden is a popular testing ground for automakers due to the consistently long and cold winter.

Join the Conversation (0)
While much of North America hunkers down against the chill of a Polar Vortex, BMW is embracing the cold. Being moulded by it. Taking the iNext electric crossover to just short of the Arctic Circle in  Arjeplog, Sweden. Where today it is a balmy -21C.

Just because a vehicle is electric doesn't mean it gets a pass on the full development cycle. That means summer heat and winter cold. Arjeplog, Sweden is a popular testing ground for automakers due to the consistently long and cold winter. They can test not just the effects of the winter on the powertrain, but on handling as well.

BMW says that the iNext is being tested on snow-covered roads and ice-covered lakes. That means low temperatures and low-friction surfaces. The automaker says that this is particularly hard on the electric motor, the battery, and the cooling system. Which is probably more of a warming system for the first few kilometres on a day like that. Just ask anyone who left their smartphone in the car overnight what kind of an effect the cold can have on a lithium-ion battery. Automakers need to make sure that the same rate of discharge doesn't happen to your ride.

Engineers watch the system carefully in the sub-zero conditions. How it recharges, how electricity transfers to the motor, and how the heating and cooling responds to the conditions.

More than just powertrain, dynamics are also developed here. It's easy to engage stability and traction control on the safety and low-speeds of a frozen lake. That lets the development team make sure that the EV-specific all-wheel drive programming and stability control handle these things the way they should.

Steering, braking, and regenerative braking are put to the test. Braking feel is crucial on ice and snow, along with ABS intervention. For electric vehicles, there's the added challenge of regenerative braking. Too much and the drag of the electric motor could cause wheel lockup. Too little and the battery won't gain that wasted energy and the pedal won't respond predictably. The electric SUV is undergoing the same testing regimen as any other gas or diesel model from the company. Likely a more extensive one as all of the extra components are tested.

The icy testing gives us a better look at the production iNext too. It looks to keep some of the concept car's design features, but, not surprisingly, more toned down. That big joined kidney grille, for example, looks to be much shorter than the concept's. There are rear door handles now, too. And a roofline that looks much more conventional (and good for rear seat passengers and cargo) than the concept.

BMW is targeting the production iNext to start assembly in 2021. As long as they're thawed out by then. 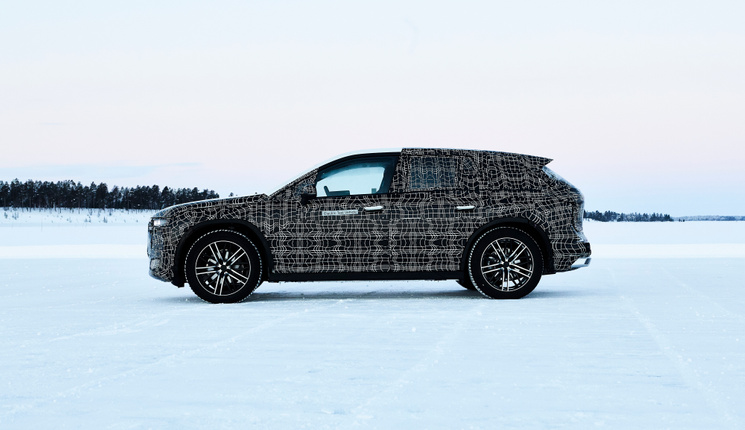