It’s large and can be a little daunting, so if you’re planning on visiting this weekend (it runs until March 29), be sure to check these exhibits out during your visit. 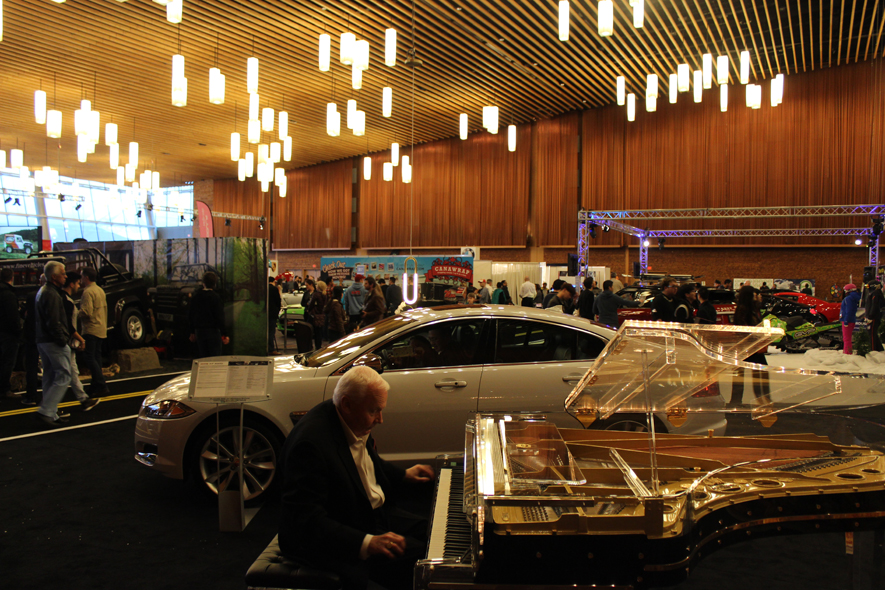 The Twin Mill Hot wheels car has been a staple of Mattel’s largest die-cast model brand since 1969, just two years after the first Hot Wheels models arrived in stores. Today, you can see a life-size version as soon as you enter the show through the West entrance. It’s quite the sight, too; those are two functioning GM V8 engines you see, each with their own tachometer. And, in another nod to classic Hot Wheels lore, it has redline tires. 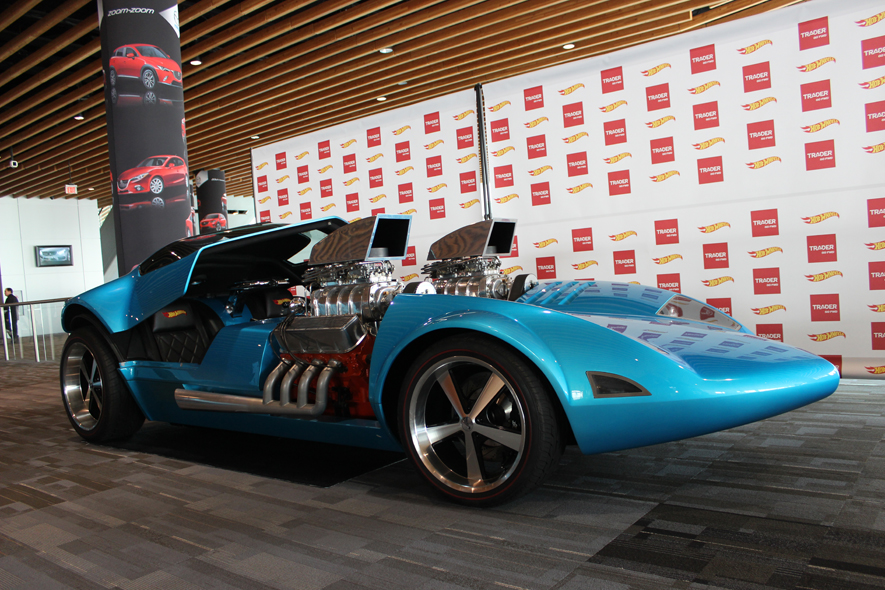 Just past the Twin Mill is the entrance to the Convention Centre’s Signature Ballroom, where you’ll find displays of supercars and custom trucks (don’t miss the TAG custom Jeeps and pickups), as well as merchants hawking their wares, from die-cast models, to paintball experiences, to all manner of car care products. 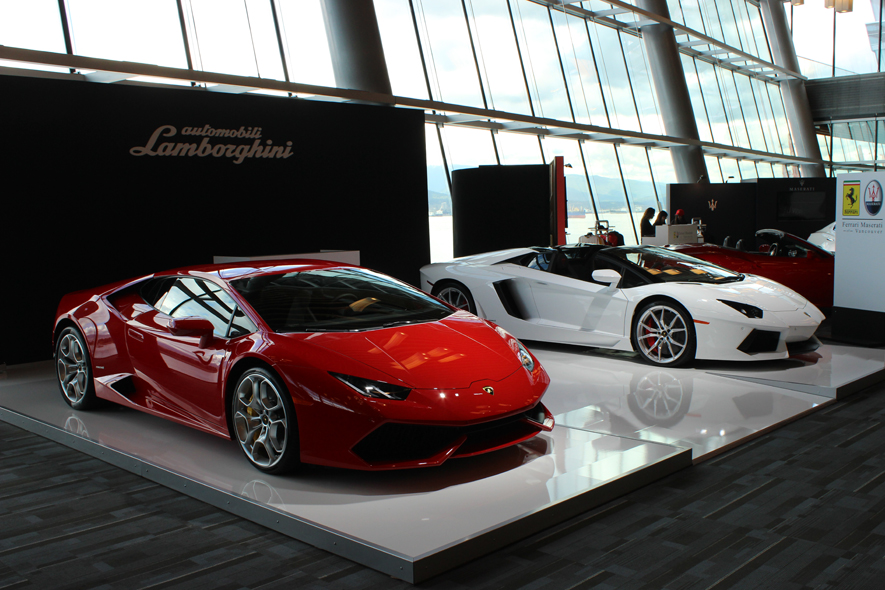 If you decide to skip the Signature Ballroom and head down to the show’s main exhibit below, be sure to check out the 7 Generations of Corvette display before you head downstairs. Presented by Dueck GM, it features an example of every gen of ‘Vette, from a 1961 C1 to a 2014 C7. 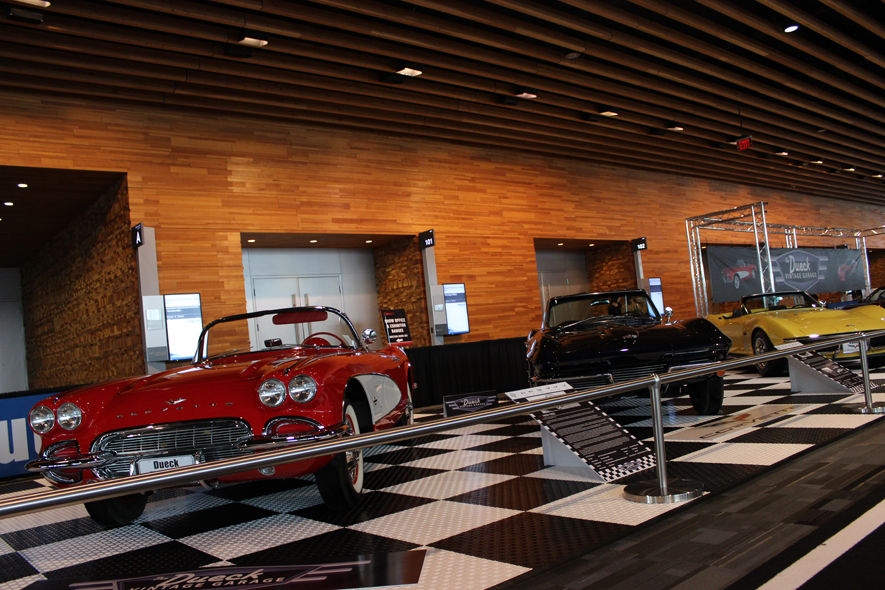 Once you’ve made your way downstairs from the ‘Vettes, be sure to check out the display of cars from Hollywood North (Vancouver, that is!). Cars from the live-action Scooby Doo 2 film and Percy Jackson & Olympians: The Lightning Thief are on display here, in an exhibit that’s sure to grow as more and more studios move up here thanks to a strengthening US dollar. 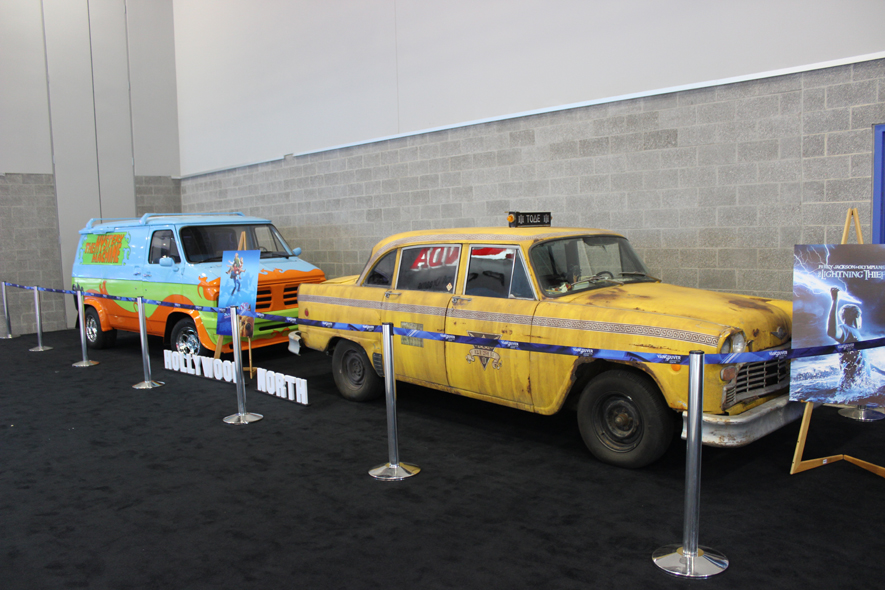 On the floor’s opposite side, you’ll find what may just be one of the biggest paradigm shifts at the show in the form of the Bigfoot E. That “Bigfoot” name is likely familiar to monster truck fans, as the big blue trucks are some of the most recognizable ever on the Monster Jam circuit. This one, however, is finished in a black-and-yellow electric theme, and makes 800 lb-ft. of purely electric torque. Can you imagine seeing this baby silently rolling towards you, like a vision from some strange silent movie? 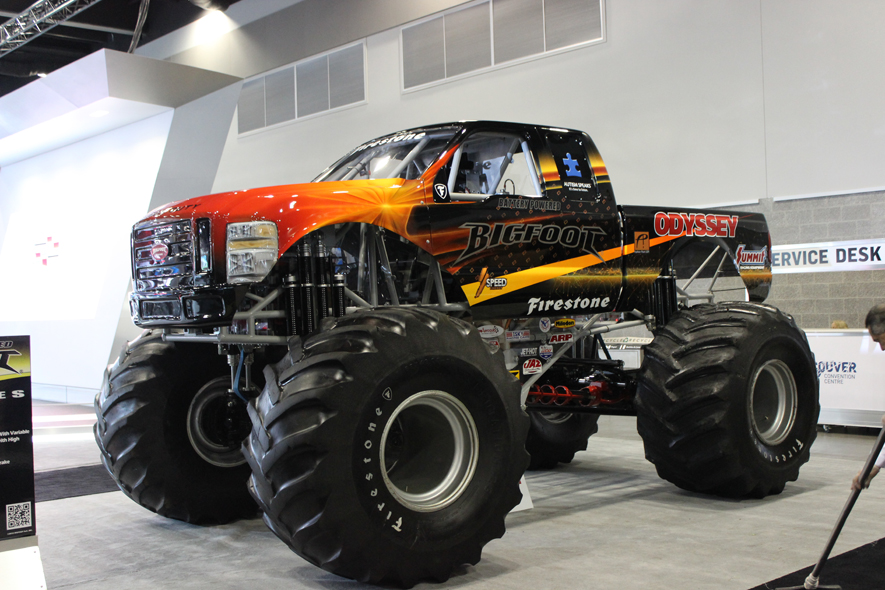 Directly beside Bigfoot E is a car from pretty much the opposite end of the automotive spectrum: a one-of-a-kind, chopped and lowered Lincoln powered by a gnarly, 1,250 horsepower Ford V8 sourced from a drag racer. Also gracing 360 Fab’s stand—the garage is based in Abbotsford, BC—is a custom Malibu and Dodge Charger. The latter is especially interesting, featuring a blower that reminds me of Dom’s car from The Fast and the Furious films, and a paint-job directly out of The Dukes of Hazzard. 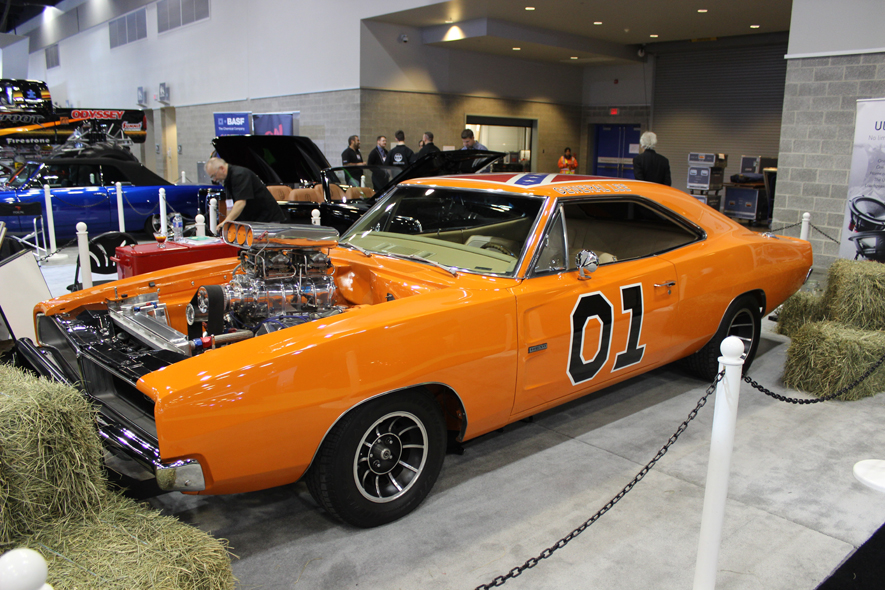 You’ll find a brace of these at the show, sponsored by manufacturers like Subaru and Ford, as well as privateers in the Signature Ballroom. However, the crème de la crème has to be the example at the Ford stand; it features a lifted platform supporting three seats, a steering wheel, pedals and three displays. To really up the ante in the realism department, the platform is suspended on hydraulic struts that simulate the body movement of a car. There are rider restrictions, however, so be sure to check the rules displayed at the base of the stand. 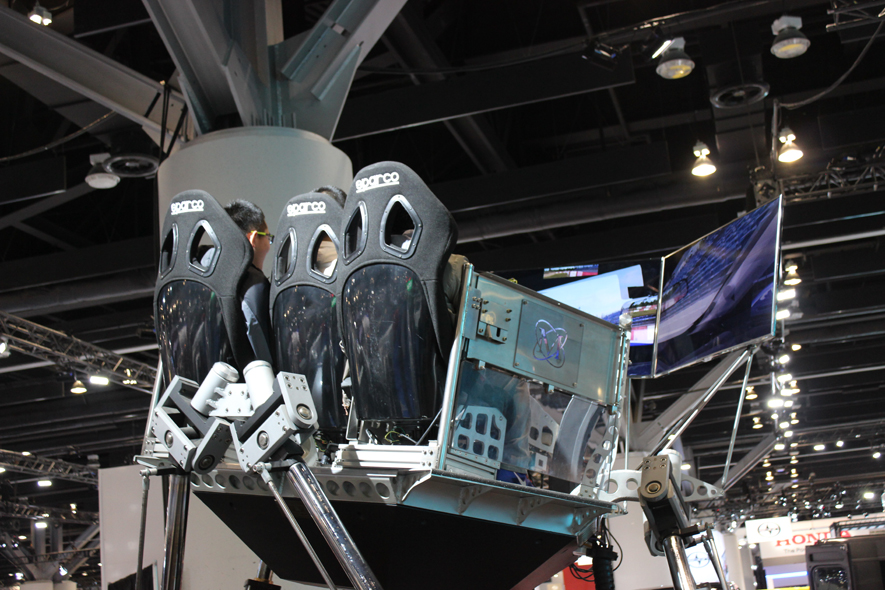 If you’d rather drive for real than drive virtually, and you’re more into efficient motoring than racing, then the EV drive experience may be just the ticket. Visitors with a valid driver’s license will have the opportunity to experience EV driving at the wheel of a selection of cars including the Ford Focus EV. You’ll see all the cars lined on Pender street, right along the south side of the Convention Centre. 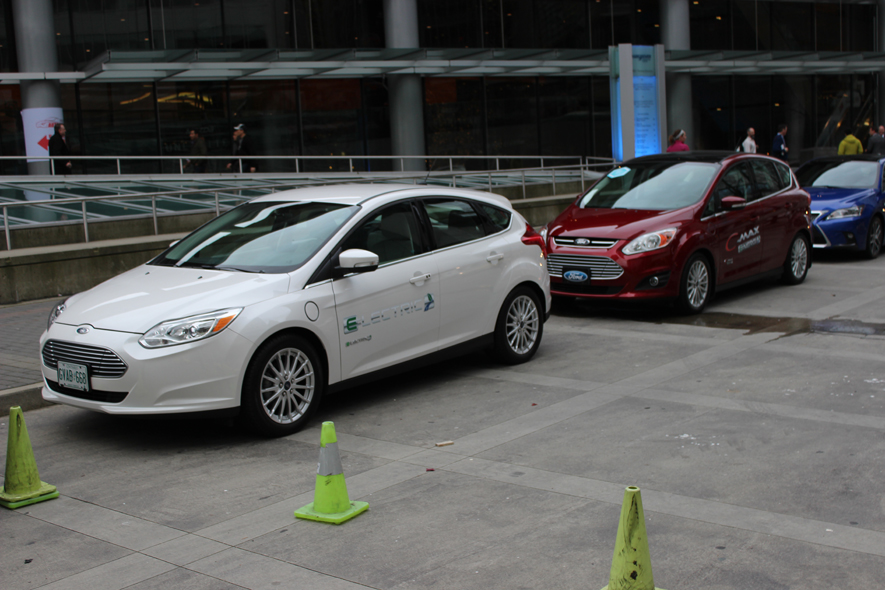 Of course, be sure to take some time at the show’s centerpiece gallery: the manufacturer floor, where Canada’s major auto manufacturers display their wares. You’ll find custom FR-esses and tCs (as well as a DJ booth) at the Scion stand, a fire-breathing Mercedes AMG GT over at Mercedes-Benz, and concept cars from Subaru, Infiniti and more. 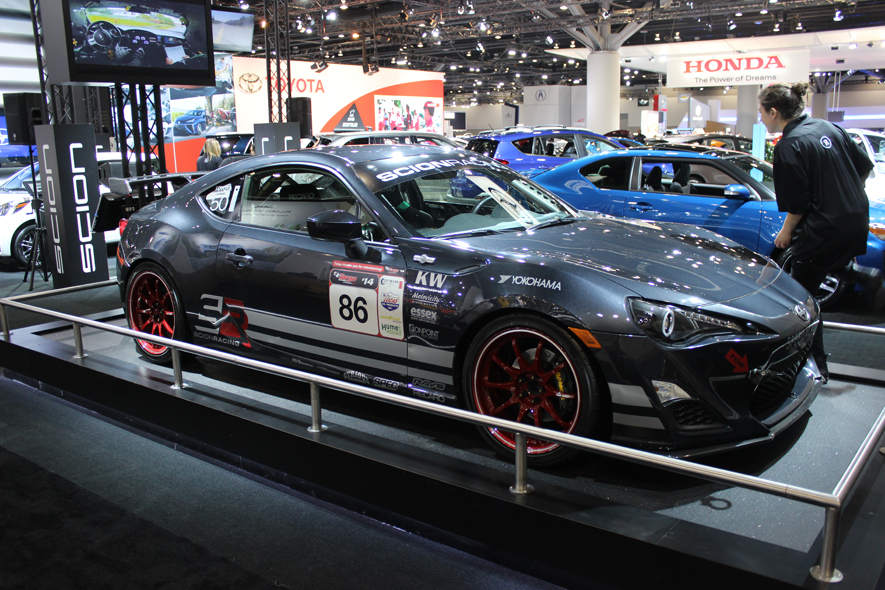