Thoughts while driving around on a wintry afternoon:

I used to say to my wife – who knows how to drive but let her licence lapse years ago because, when you live with me, I do the driving – that driving was the perfect illustration of cooperation. You have tens of thousands of cars and trucks on the road and, for the most part, they avoid running into each other and get to where they want to go.

That was then. Nowadays, driving on the 400-Series highways in and around the GTA is almost like taking your life in your hands. Nobody gives anybody else an inch – er, centimetre. I live near a major highway interchange where tractor-trailers leave warehouses with their loads and use a cloverleaf to get onto the 401.

They emerge from the “on” ramp with their directional signal indicating they would like to move left onto the highway and there are a bunch of cars in front of me and I’m watching this little scenario play out and I’m seeing that not one will slow down and let that big truck into line.

Now, if just one of those drivers had eased off the accelerator and let that truck in, we would all have been able to keep going with a minimum of fuss. But by being jerks and hanging that truck out to dry, they forced it to stop at the end of that “on” ramp and somebody on the highway (me) then had to stop to let the Big Guy in and all of a sudden you’ve got a backup and before long it backs up for miles – er, kilometres.

Many, many years ago, when I first got my driver’s licence (the day I turned 16, incidentally), my dad, the late J.A. (Al) McDonald, sat me down and told me this: your car (I bought my first one two days after I turned 16, incidentally) is a lethal weapon. Make sure it is in good repair and that all impediments to you driving it safely are wiped off or removed before you go out on the road.

I follow his instructions to the letter. If I don’t have time to run my truck through the car wash, I take a bottle of Windex and make sure I can see properly out of all the windows. And I have an extended sweeper so that in winter, after it snows, I can push or sweep whatever accumulates off of it.

And what about the roof, you say? Well, I have a stool and I stand on it to sweep off the snow.

So few things make me as angry as driving along in the winter and suddenly having a large load of snow land on my windshield that came flying off a car or truck in front of me because the driver was too lazy to take a few minutes to clean it off. It can startle you and cause a crash. (I took the photo of that car in front of me a week ago Thursday. The driver is a jerk.)

Now, nobody taught me anything about what’s coming next, which came as a big surprise.

When I picked up my wife from work on Christmas Eve, I drove us home, parked and locked the truck, and went into the house where we planned to stay until I drove her back to work in early January at the end of the Christmas break. We intended to hibernate. The pandemic kept us from celebrating with either of our families so we had lots of food and drink to consume and a bunch of Christmas movies to watch, etc. Other than opening the front door to get the Star out of the mailbox each day, we did not go out of the house once.

Since the truck had been sitting out in the elements for more than 10 days, I decided on the Sunday (Jan. 3), the day before I had to take it out on the road again, to give it the old once-over: clean off the snow, take the Windex to the windows and check the oil, wiper fluid and anything else that needed doing.

So, first things first: I got rid of the snow and spiffed up the glass. Then I popped the hood and what did I find but about a dozen pine cones that some enterprising squirrel had stashed away for a rainy day. They were neatly placed in just about every nook and cranny, hidden so that when Mr. (or Ms.) Squirrel felt like a feed of seeds that are hidden in the cones, they would be readily available.

There was no sign of the critter, which was good. I managed to find all the cones and tossed them out on the snowbank. And every time I go out there now, I bang on my hood to make sure he or she isn’t inside rummaging around, looking for lunch

Smarten up, squirrels. I mean it. 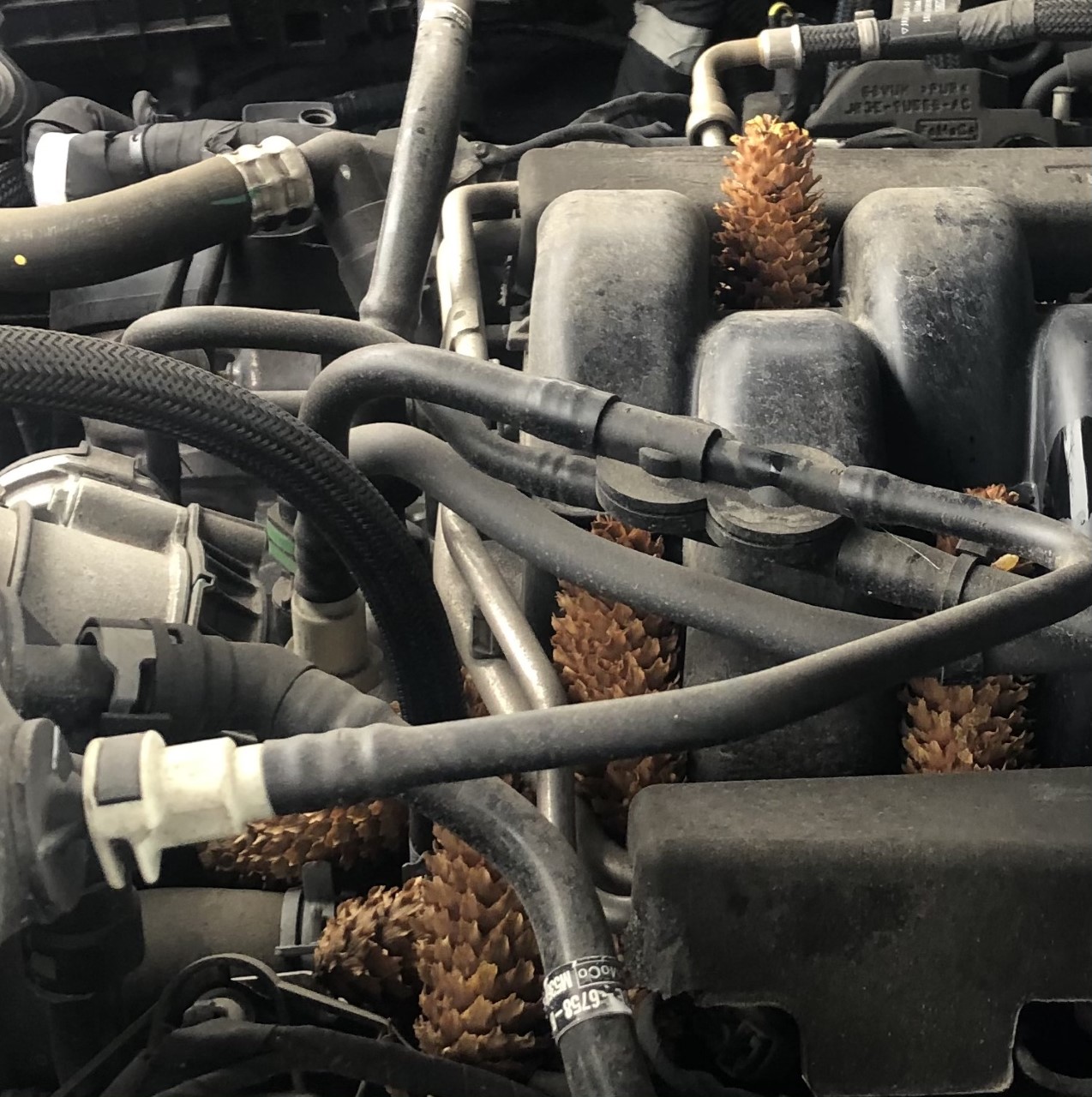 Norris McDonald is a retired Star editor who continues to write for Wheels under contract. He reviews the weekend’s auto racing each Monday at wheels.ca