Join the Conversation (0)
If you’re wondering what the next big onslaught from automakers in terms of vehicle type and shape will be, look no further than the all-electric pickup truck. With this style of machine ensconced as the beyond-dominant sales leader in this country, and technology for electric vehicles finally beginning to catch up with customer expectations, manufacturers are rushing to produce these brand-new offerings. Witness efforts from Rivian, Tesla, General Motors, and – the sales king – Ford.

They’ve decided to call their EV truck the Lightning, reaching back into the memory banks for an appropriately electrified name (even if it was last applied to a honkin’ performance truck). Its entry-level trim will be called the Pro, showing up for work as a four-door crew cab with four-wheel drive and a 5.5-foot box. With a standard-range battery, Ford is targeting a driving range of roughly 365 kilometres when fully charged. That range will, of course, vary given the truck’s load and weather conditions.

Dual electric motors are standard kit, providing 4x4 operation and an expected 426 horsepower. Torque is said to clock in at a towering 775 lb-ft even in this Pro trim, meaning the truck should launch like a frightened cat. Maximum payload will be in the 2000 pounds (909 kg) range, with the massive lockable front trunk able to bear 400lbs (181 kg) worth of stuff from your trip to Costco. Maximum towing is said to be in the 7,700 pound range (3,500 kg). In other words, this ain’t just a so-called ‘compliance truck’ to satisfy some government EV mandate; it appears the F-150 Lightning Pro is ready for tasks.

Inside, the Pro should come equipped with work-grade upholstery on its seats and comforts like a flow-through centre console with a stowable gear selector. An enormous capacitive touch infotainment screen will live on the dashboard and house typical day-to-day commands, but Ford is keenly aware that truck customers use their vehicles for work duties and have seen fit to retain many redundant dials and switches for common commands. This is important for glove-wearing workers or, let’s be honest, 99 percent of Canadians during our interminable winter months. 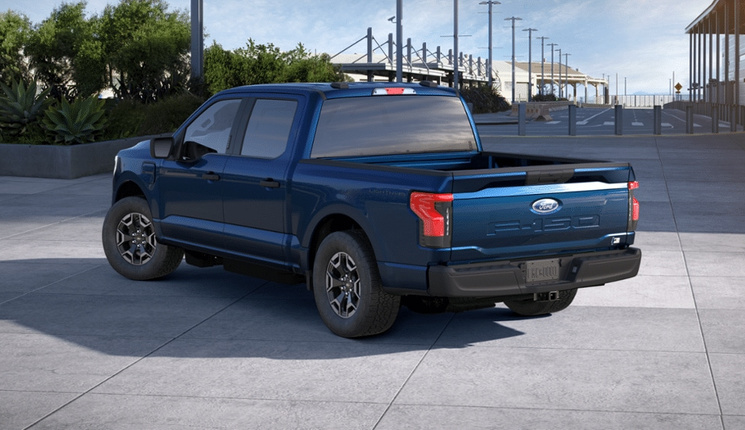 
At launch, the F-150 Lightning will be offered in Pro ($58,000) or XLT for about ten grand extra. Ford is eager to point out that Canadian-bound XLTs will have a more standard equipment than their American counterparts, tailored for life here in the Great White North. Specifically, XLTs in this country will have items like Ford Co-Pilot 360 Assist 2.0, heated front seats, power down tailgate and LED box lighting, rain-sensing wipers, and Ford’s 9.6-kW Pro Power Onboard generator system. This helps explain some of the price differential between here and south of the border.

It also makes a case for upgrading to the XLT. While the sum of $10,000 is very significant, the 9.6-kW generator – which provides ten 120V household-style outlets plus a 240V service – is an very useful piece of technology which can power a significant chunk of one’s home during a grid outage. Stand-along generator systems of that size can cost nearly half the Pro-to-XLT premium – and you can’t drive around in (or tow a trailer with) a home-based generator.

Toss in intelligent cruise control plus other uniquely Canadian goodies and the argument for selecting an XLT-trimmed F-150 Lightning is very strong.