Despite its origins in this country as the purveyor of simple and affordable little Bugs and Buses, the VW brand hasn’t been featured very often in the Base Camp series. This is largely in part to their recent predilection for peddling Cherman Engineering and pricing their wares accordingly.

Volkswagen plays in the compact crossover market, of course, just like every other major manufacturer looking to make a buck in this popular segment. Called the Tiguan, this Teutonic tongue twister starts at a hair under $30,000. For that sum, one will find themselves in command of a 2.0-litre four-cylinder engine making 184 horsepower which is roughly average for this segment. It’s worth noting that no matter how much one spends on a Tiguan, power levels remain the same. Those ponies are funneled to the earth through an 8-speed automatic to the front wheels. Trendline is the only trim available in FWD, by the way; all-wheel drive is a $2,200 option.

Its typical crossover shape is jazzed up by standard LED illumination for the daytime running lights and rear taillamps. Seventeen-inch alloy wheels put to rest any fears of cheap looking steelies showing up on this base model, though blacked-out window surrounds are a dead giveaway that this is the cheapest Tiguan. However, colour-keyed exterior side mirrors are heated as are the washer nozzles – a thoughtful addition for cold Canadian winters. Continuing an irritating theme, only four shades of grey are available as paint choices

Front seats are heated and the single-zone climate control is equipped with air conditioning as you’d expect in this price bracket. Trendline is the only Tiguan trim not to have some sort of leather or leatherette covering on its steering wheel, a surface you’ll palm every time you drive the thing. Third-row seating is offered for $750 but only sadists and the delusional would dream of poking human beings in the way back of a Tiguan. If you want more chairs in your VW crossover, best step up to a larger vehicle. 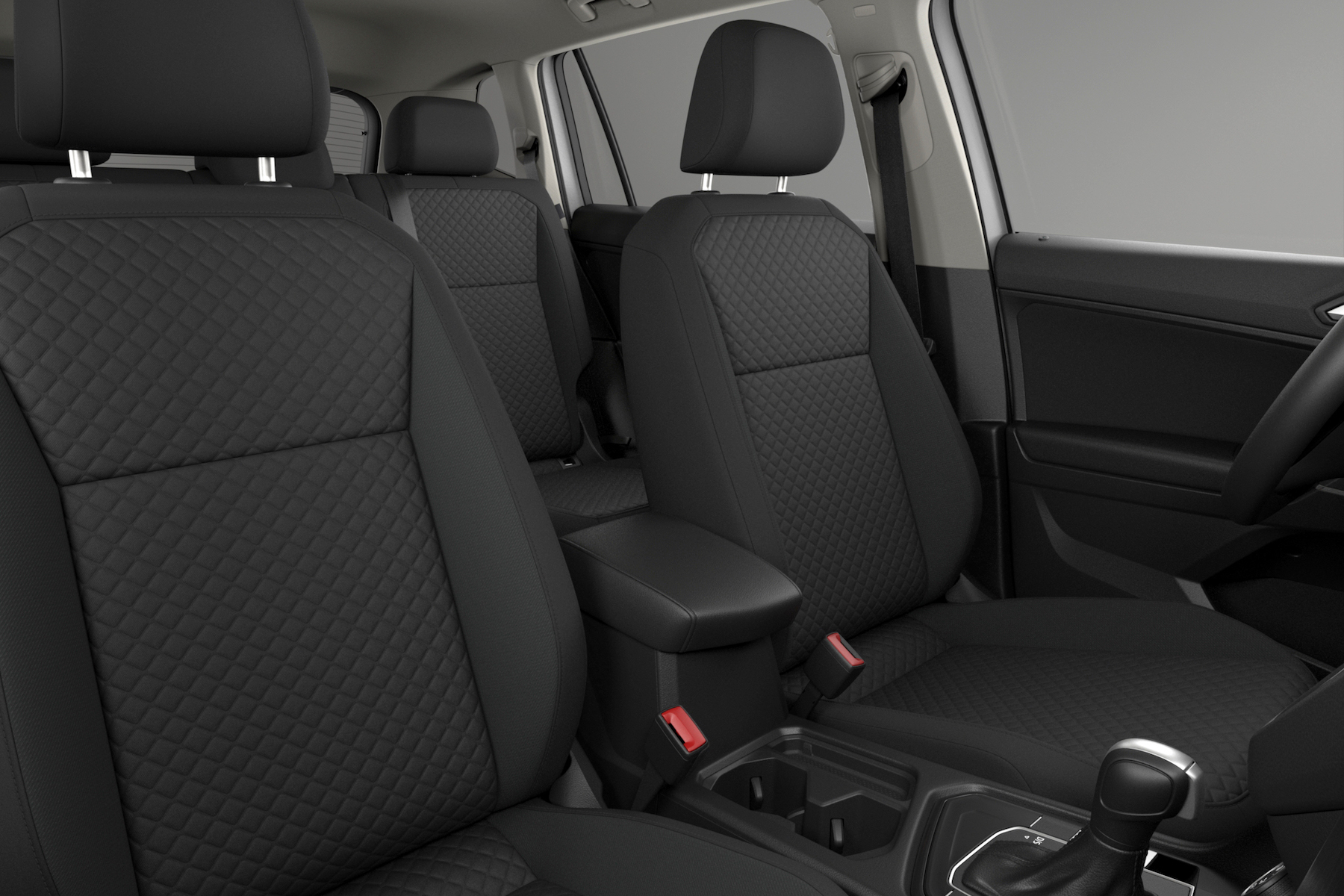 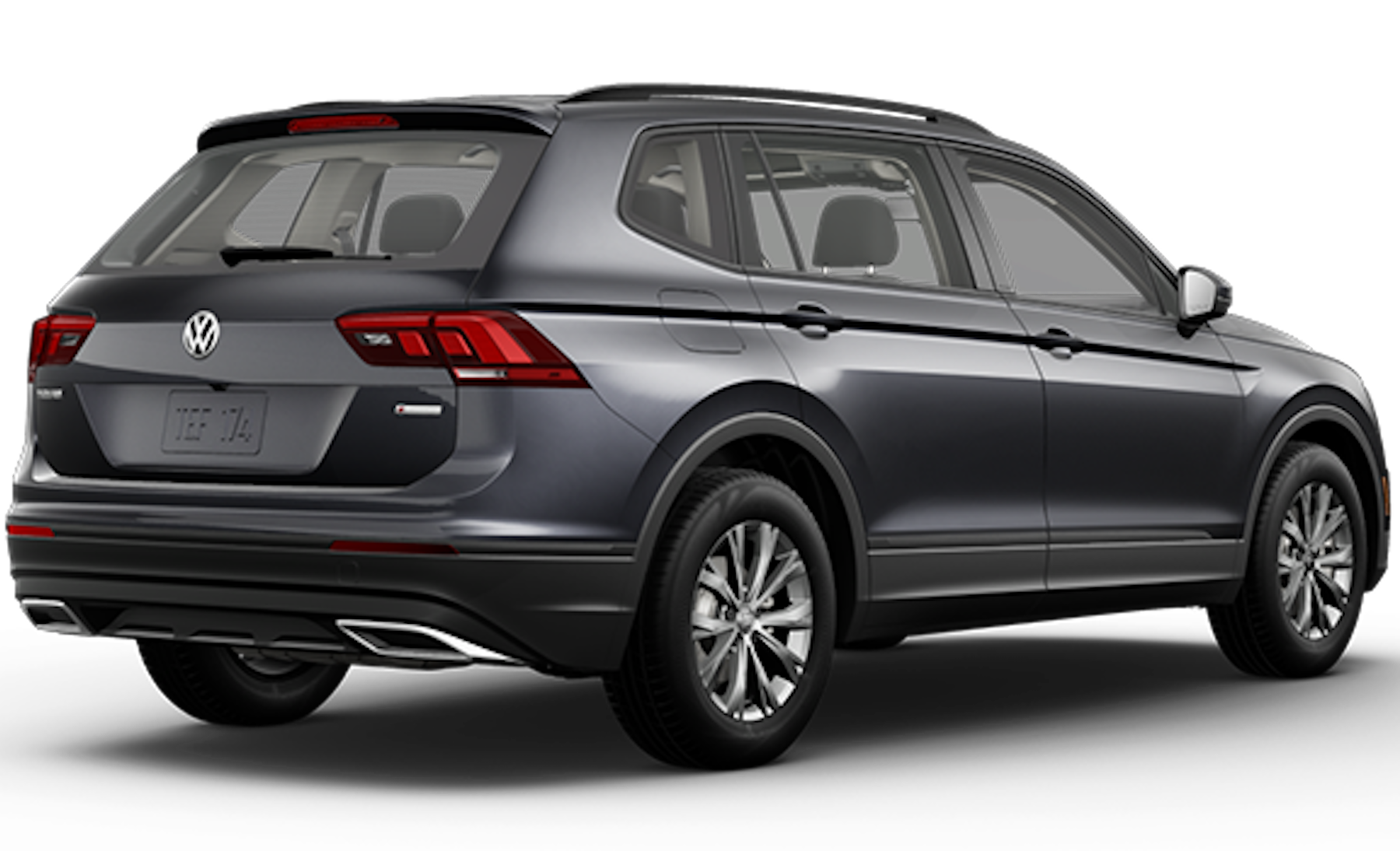 Also, it’s the only trim in the lineup to be saddled with the brand’s sad-sack 6.5-inch infotainment system that’s absent satellite radio capability. It does play well with Apple CarPlay and Android Auto, however, so that’s a plus.

Customers would do well to closely examine the next-level-up Comfortline trim before signing off on a base Trendline. Keyless access is added, plus a power tailgate and prep for a remote starter. Front seats gain power adjustments and the climate control morphs into a dual-zone unit while the infotainment system grows in size while adding satellite radio and other functionalities. Additional leatherette touch points don’t hurt, either.

The kicker is that Comfortline is only available in all-wheel drive, jacking the price to $35,145. This is a long walk from an entry-level Trendline but only $3,150 more dear than an all-wheel drive Trendline. If power going to all four wheels is important to you, this is one case in which we recommend a trim that doesn’t reside at Base Camp.