Every week, wheels.ca selects a new vehicle on sale in Canada and takes a good look at its entry-level trim. If we find it worthy of your consideration, we'll let you know. If not, we'll recommend one that earns a passing grade

There’s no shortage of casualties in the Canadian automotive marketplace these days, with the likes of family sedans and a few minivans being broomed aside in favour of all-wheel drive crossover-style vehicles. As for the Size Small pickup, the rumours of its death are greatly exaggerated. Toyota still sells a boatload of Tacoma trucks, Nissan has just introduced a new Frontier, and models from other manufacturers continue to do well.

For 2021, the Tacoma remains available in Access Cab guise, rather than forcing customers to open their wallets for a crew cab with four full doors. In Canada, the Tacoma is offered only in four-wheel drive with a 3.5-litre V6 engine under the hood making 278 horsepower. A manual transmission is available, unlike most of its competition, though it is offered on the off-road focused TRD trims and not the base model. Gearheads will appreciate knowing there’s an automatic limited-slip differential in the rear pumpkin rather than a sad-sack open carrier.

Customers of this $38,350 Tacoma will find themselves staring down the barrel of just three colour choices – add Contractor White and Basic Black to the Murky Grey shown here. At least the door handles, fender flares, and rear bumper are all colour-keyed in a nod to sportiness. Its power-operated side mirrors are heated, and those are 16-inch tires on a set of no-nonsense steel wheels. Toyota’s Safety Sense system is standard, bringing lane departure alerts and adaptive cruise control to the party.

Inside, you’ll be lighting the V6 fires with a twist-n-turn ignition key, though power windows and the like are standard thanks to economies of scale. Also on board? A handy manually sliding rear window, a feature that’s often an option or part of an expensive package on most trucks. There’s air conditioning, a tilt/telescope steering wheel, and heated front seats. Infotainment, never Toyota’s strong suit, is handled by a 7-inch screen in this base model truck. 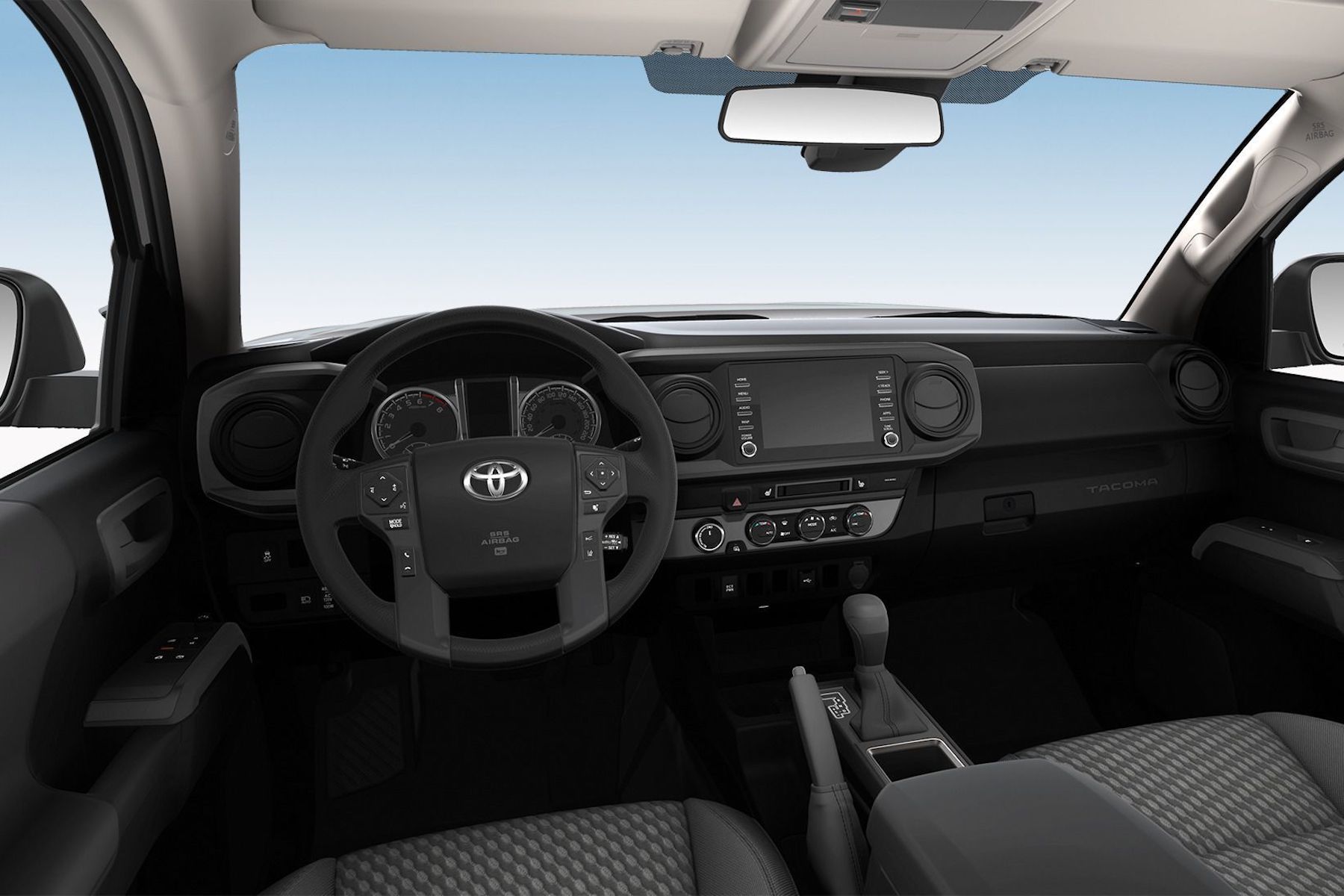 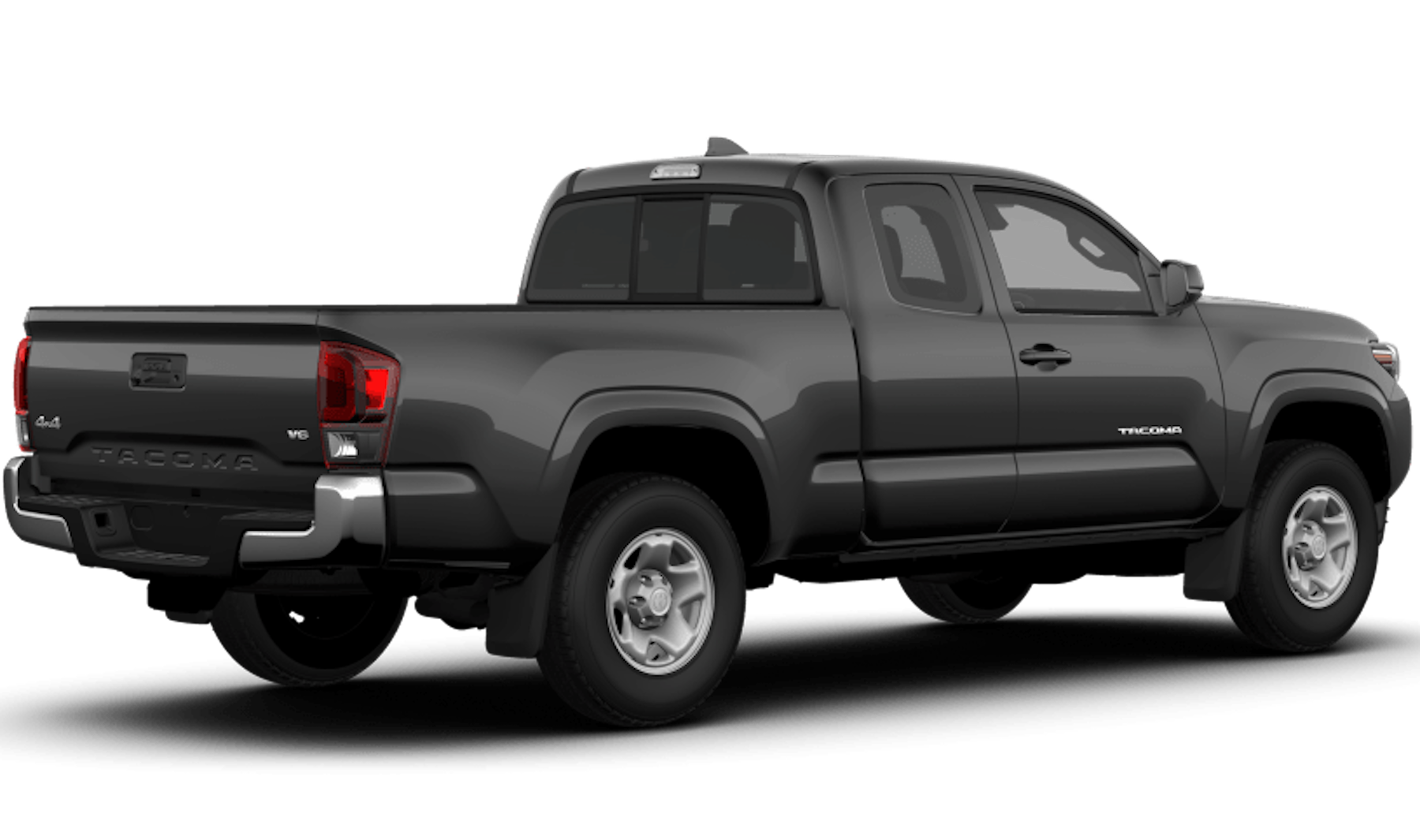 For the sake of splashing out an extra $2,410, one can step up to the SR5 trim. There are no benefits in terms of power or capability but several important creature comforts appear such as a power outlet in the cargo bed and fog lamps in the front bumper. Equally as important is a better infotainment system which packs a larger screen and satellite radio capability.

Tossing in a leather-wrapped steering wheel and better seat fabric just makes the choice all that much clearer. Without giving up anything in terms of ground clearance (9.4 inches), towing capacity (6,500 lbs), or fuel economy (11.8L/100km), selecting the SR5 is the smart choice since it brings comforts and conveniences customers will use just about every day.

And if you wish to invest a few bucks in a vinyl exterior wrap to jazz up Tacoma SR5’s exterior in the face of muted colour options, don’t let us stop you.