Join the Conversation (0)
Subaru was well ahead of its time in the '80s and '90s, offering a range of all-wheel drive cars long before the world traded out of sedans and into crossover-type vehicles. However, except for a brief dalliance over a decade ago, the brand hasn't had an entrant into the burgeoning (and profitable) three-row segment. That changed when they introduced the Ascent.

Every Ascent, regardless of trim, receives a turbocharged 2.4-litre four-cylinder making 260 horsepower and mated to a continuously variable transmission. This is one car in which paying more doesn't net the customer extra power. It's all-wheel drive, of course, with a driver-selectable 'X-Mode' which fiddles with engine response and the allocation of torque to help you bust through that snowbank at the end of your driveway with extra zeal.

Subaru has done an excellent job allocating Ascent's interior room, allowing stretch-em-out comfort in the first two rows and habitable space in the third-row Way Back. This is true for all trims, though this base model has a smidgen more headroom thanks to the lack of sunroof. Cloth seats are heated here, as are the side view mirrors. The brand's excellent EyeSight suite of active safety features is also standard, including adaptive cruise control and lane keeping.

However, this Convenience model is the only one in the Ascent range to feature the sad-sack 6.5-inch infotainment unit bearing a screen smaller than most smartphones. It does come with satellite radio and Apple/Android functionalities, though. Also absent is push-button start, leaving owners fumbling with their keys, and various touch points like the steering wheel and door handles are wrapped in lower-grade materials than other Ascent grades. 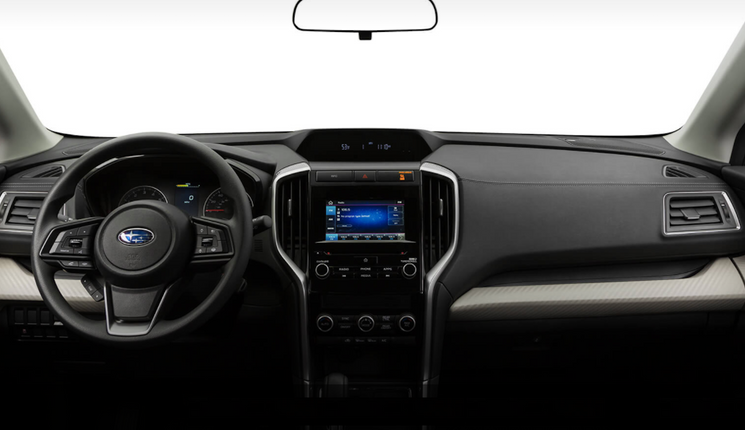 Ascent's paint palette isn't especially broad but Subaru does have the good sense to offer something other than silver and white at no extra charge on this base trim, including the Crimson Red shown here. It's easy to spot this cheapest of Ascent models since they are endowed with black side mirror housings and lack a set of fog lamps. At least the door handles are body colour.


Climbing to the next-rung Touring model requires taking a $5500 walk, not a small chunk of change by anyone's measure. For that sum one does get better infotainment, a sunroof, extra interior lighting, and some cargo accessories. Push button start and rear seat controls for that row's ventilation are also handy. If one plans to haul a trailer, know Ascent's widely advertised 5000lb towing capacity applies to all trims except the Convenience due to its lack of transmission oil cooler.

Still, that considerable price delta will tack about $100 per month onto a five-year loan. None of these omissions, except the transmission cooler, affect the car's performance. If you can live without a few minor creature comforts, and don't plan to tow a heavy trailer, the entry-level Ascent is a compelling package.