When McLaren Racing was inducted into the Canadian Motorsport Hall of Fame in the International Category Wednesday, on the eve of the 2020 Canadian International AutoShow’s Media Preview Day, it was an acknowledgment of the legacy McLaren holds in the pantheon of motorsport.

Founded by New Zealander Bruce McLaren, the induction also recognized his immense personal contribution to Canadian motorsport. A Can-Am Challenge Cup champion and circuit contributor, he died tragically in a testing accident in 1970.

The marque today is not only a competitive force on the track – in addition to F1 they return this year to IndyCar – but also as a manufacturer of true-to-racing high-end supercars.

“McLaren has been one of the brands which has been stalwarts of motor racing both in IndyCar and Formula One,” he said, highlighting some of the legendary cars featured in the exhibit, not to mention some historic Can-Am beasts.

“We’ve also got the 1974 M23 McLaren driven by Emerson Fittipaldi and a 1975 Gatorade McLaren M16E IndyCar driven by Johnny Rutherford,” who represented McLaren at the special induction.”

That iconic McLaren was the first time the familiar Team McLaren Papaya orange was switched out for a distinctive green and white livery. Rutherford took the car to a second place finish behind Bobby Unser at the Indy 500 that year. Forging relationships with car collectors, manufacturers and automobile museums like the Indianapolis Motor Speedway Museum means Campbell has been able to exhibit some remarkable McLarens. 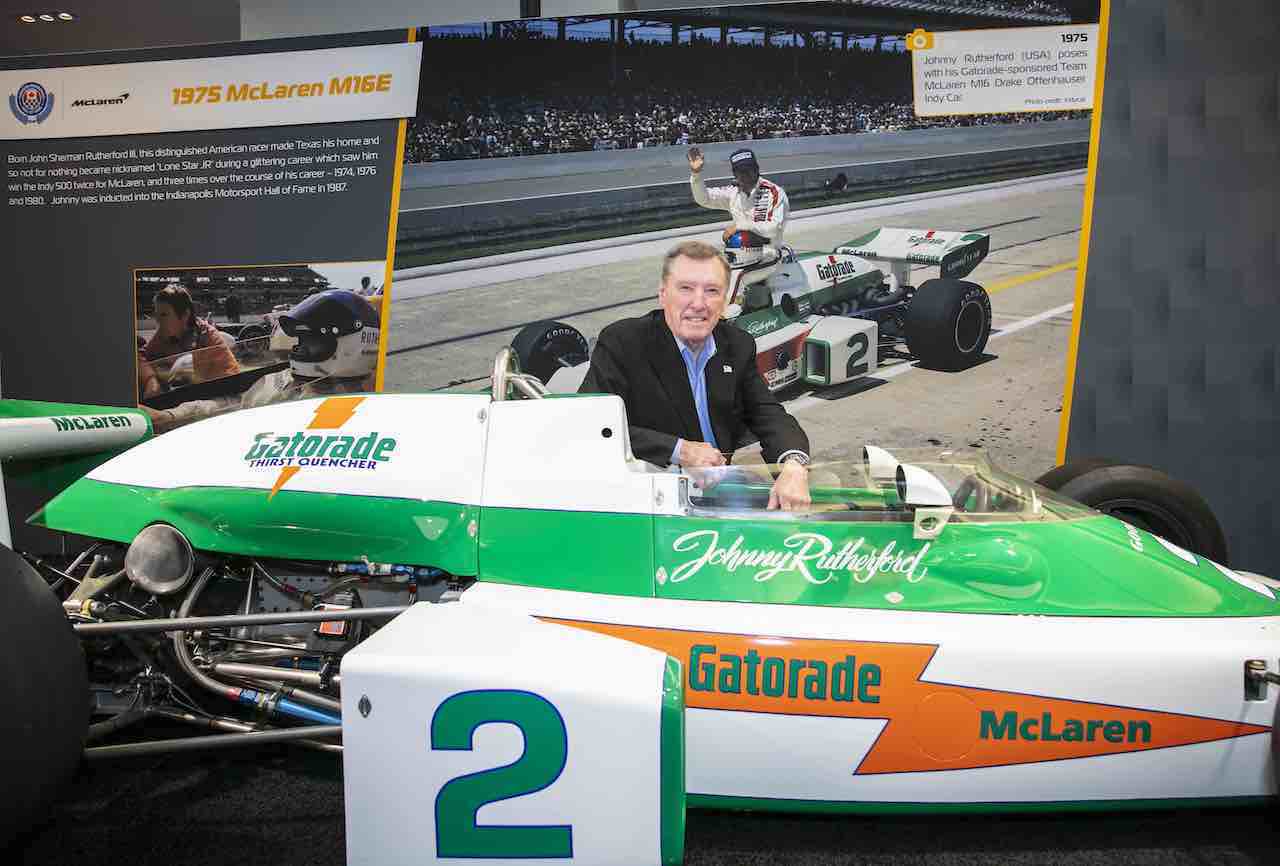 Additionally the AutoShow will feature modern McLaren race cars thanks to Pfaff Motorsports. On display is a limited edition Can-Am badged McLaren Senna that celebrates the 1969 season in which McLaren won all 11 races.  With a 25-hp power upgrade and unique louvered front fender design, the McLaren Orange livery is accented with additional Canadian touches.

The exhibit, located in a room on the 100 Level of the Metro Toronto Convention ,  North Building, will also feature a large photo and video montage.

Campbell, who worked in Formula One for 20 years prior to taking the reins in Toronto and who has visited the McLaren head office and production facility in Woking, England,  says the brand is probably truer to its racing heritage than most. With names like Senna and F1 road cars – they retail for anywhere from $250,000 to well over a million – motor racing is at the heart of McLaren.

“McLaren have often led in Formula One in many different ways from both technical race cars to marketing,” Campbell notes.

“Merging and molding the two road-car operations and race-car operations – it’s so close at McLaren’s operations in Woking and they are really symbiotic. Some of the people who are working in the race team are also working on the road car division.  There are of course lines between but there is a great deal of influence one has on the other.”

Campbell says that authenticity was brought home when Mark Roberts, a designer of McLaren road cars, responded to a question last year at the AutoShow referencing Rolls Royce’s introduction of their Cullinan SUV.

“When asked, ‘When’s McLaren going to be coming out with an SUV?’ he said, ‘Absolutely never! This is a race car on the road and it will always stay as such’.”

Campbell says McLaren is a company owned, built and managed by racers at heart.

“It shows in the products they put on the street.”

Fans of the popular Netflix series “Drive to Survive,” which follows a number of teams through a Formula One season, has made viewers familiar not only with the current crop of drivers but also some faces behind the scenes like former race car driver and marketing whiz Zak Brown – the current CEO of McLaren Racing.

The Tribute to McLaren Racing exhibit as well as the Pfaff Automotive McLaren display will give attendees a chance to appreciate first-hand the marque’s storied racing legacy and continued passion for performance road cars. 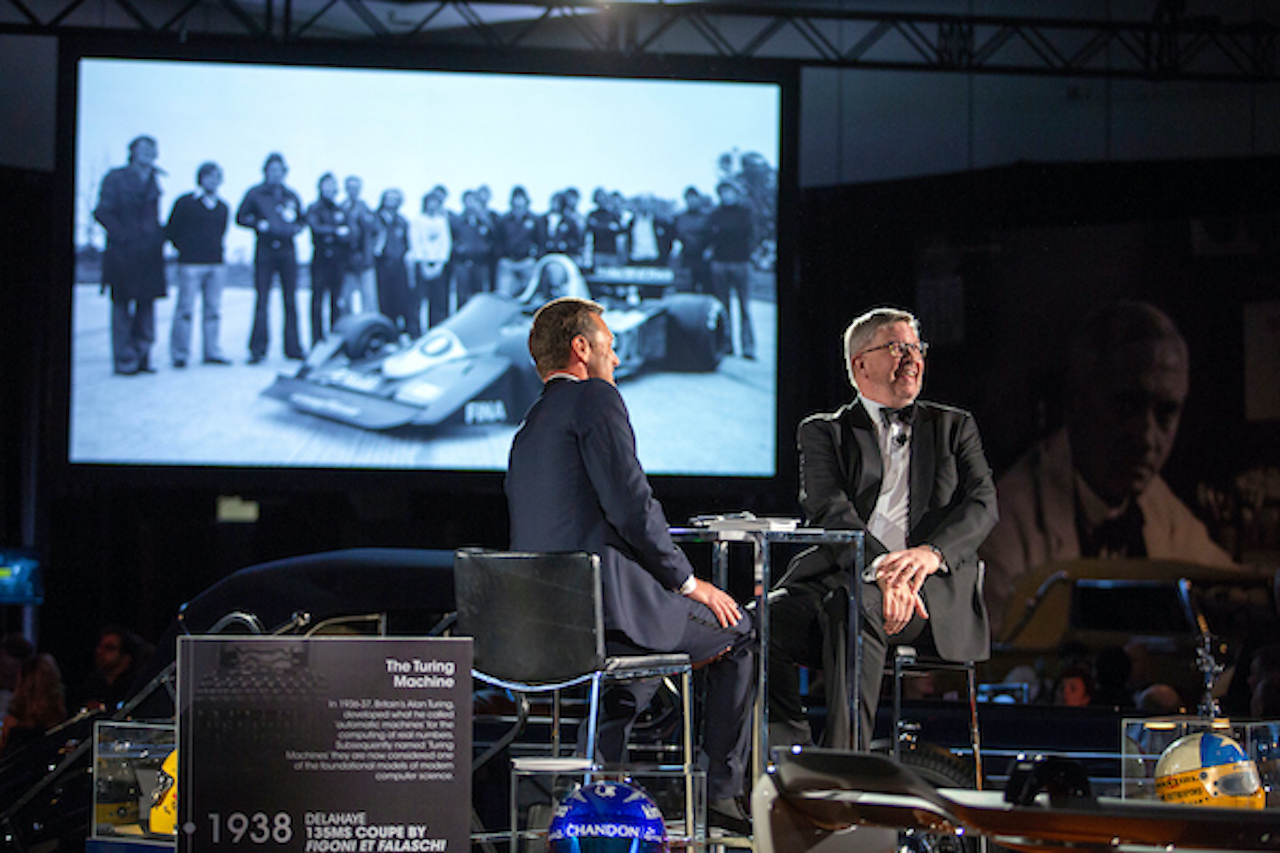 “My earliest memory of McLaren and probably the most memorable, was witnessing, on TV, Lewis Hamilton winning his first Formula One world title in dramatic fashion at the Brazilian Grand Prix. That moment cemented the McLaren brand in my mind and it is a race team that I’ve always dreamt of being a small part of.” – Oliver Askew, No. 7 Arrow McLaren SP Chevrolet

“The strongest memory I have of McLaren is the first Formula One race I ever attended, the Canadian Grand Prix in 2012. I was lucky enough to be in McLaren’s hospitality and what made it really special is that day was the day that I truly fell in love with racing, with motorsport, the noise, the smell. That’s when I truly decided this is what I want to do if I can make a living out of it. That’s definitely the most memorable moment I have of McLaren. That created the idea I have of McLaren – winning, history, and fast cars. What made it even better is that Lewis Hamilton won in a McLaren car.” Pato O’Ward, No. 5 Arrow McLaren SP Chevrolet

By Yvonne Marton  /  Special to wheels.