AutoShow GM Wants Everything To Be Just Right

Jason Campbell came to the AutoShow from Formula One and insists on the same standard of excellence.

Jason Campbell was a man on a mission. It was last Wednesday, Feb. 13, two days before the Canadian International AutoShow opened its doors to the public, and one of the most important moments in the history of the AutoShow was about to take place.

The Formula One team, Racing Point (since renamed SportPesa Racing Point F1 Team), had chosen Toronto to unveil its 2019 car. Owned by a consortium led by Montreal entrepreneur Lawrence Stroll and featuring his race-car-driving son Lance Stroll, the team had not only chosen to do its “launch” (as it’s called in F1 circles) in the financial capital of Canada but to do it in the run-up to the 2019 AutoShow.

This was a very big deal. An F1 team had never before been launched in Canada. TSN, the all-sports network, was covering it live and was streaming the 30-minute presentation around the world. International media were reporting on it — Internet, radio and television and newspaper reporters from here, there and everywhere were on site — and although it was only 6:30 in the morning, Campbell was fretting over every last detail.

Campbell — and you will hear a lot about him throughout the AutoShow because he has his finger in every pie — is a perfectionist. His background is Formula One, where everything, in theory as well as practice, is spit ‘n polish. The attention to detail can be mind-boggling. He insists on the same approach to the AutoShow.

So he leaves his office, walking at a clip that would leave most people panting in his wake, and checks with the Metro Toronto Convention Centre’s security staff that everything is OK and they know where everybody coming for the launch should go.

Then it’s off to the Barret-Jackson display room (the Scottsdale, Ariz., auction house has an exhibit in a room on the 100 level of the north building, not far from the John Bassett Theatre where the launch would take place). Something isn’t right. The covers are still on some cars. A ladder has been left in the middle of an aisle. Some chairs have to be moved.

Not content to wait for people to show up (the place will be crawling with media and Racing Point people before long), Campbell and an assistant take five minutes to make things right. Then it’s off to Auto Exotica, one of the Auto Show’s most popular attractions (you can’t count high enough to say out loud the total worth of the cars in there), where he discovers that the Steinway grand piano — a player piano, to be accurate — isn’t playing. (See what I said about attention to detail?) He makes a phone call and is assured it will be tinkling away on its own before anybody from the outside shows up.

From there, it’s off to the backstage area of the John Bassett Theatre to meet and greet executives from TSN and to have a last liaise with the production people who are doing a launch run-through in advance of the real thing, which is scheduled for 10 a.m. Campbell has picked up a bit of an entourage at this point and when they follow him out onto the stage — where the car is sitting in all its glory, uncovered — one of the Racing Point staffers becomes concerned (although she doesn’t say anything, but you can see it in her eyes) that someone might take a fast phone photo and tweet it out to the world before the launch is held.

The car is quickly covered up. And who’s the first to pick up a corner of the tarpaulin to get it into position? Jason Campbell, of course. And when he finishes that, he takes his still growing band of fans behind the curtain, where they all get to shake hands with Lawrence Stroll, who’s popped by for a visit. 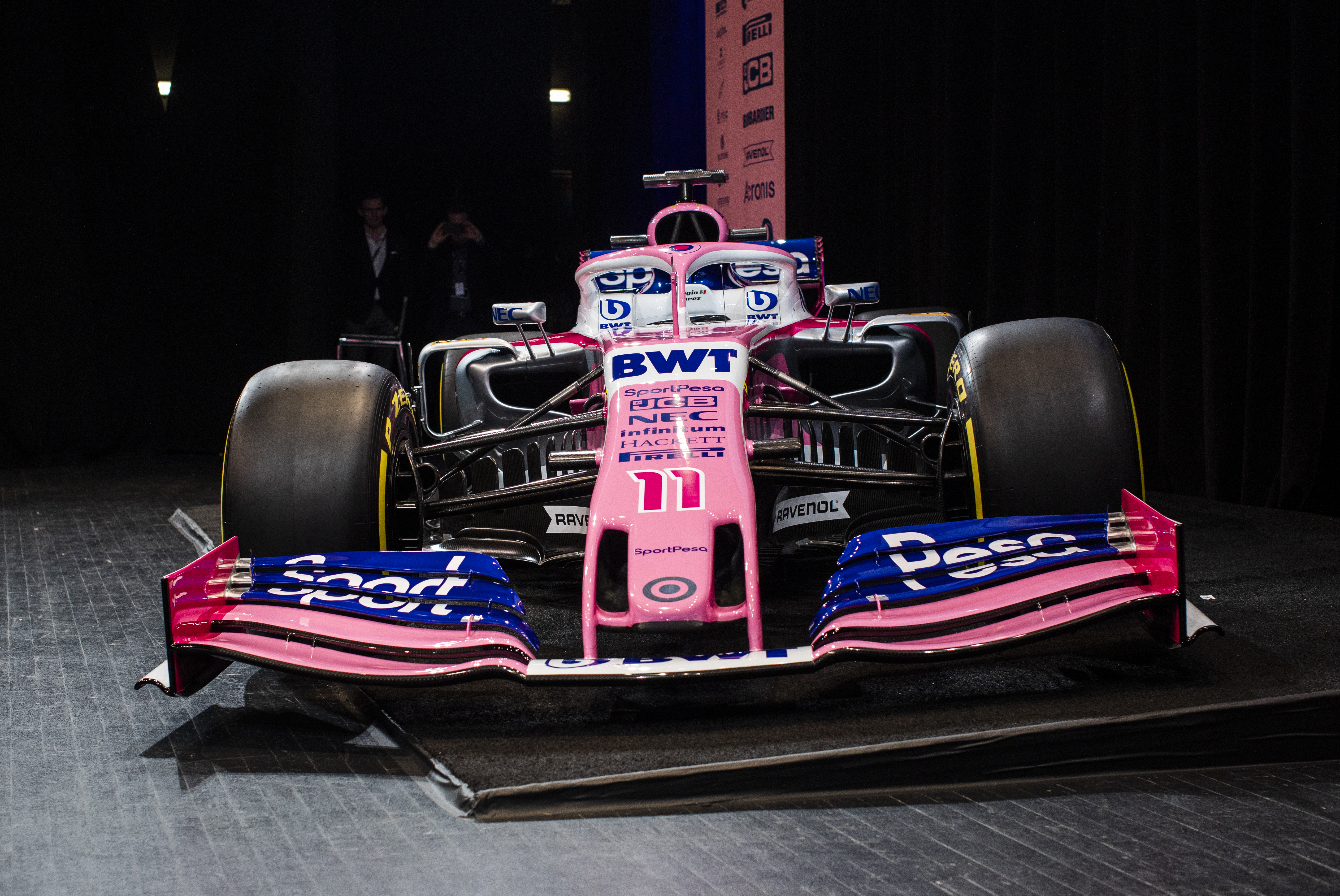 Stroll is an imposing man. Brilliant, he specializes in putting together million-dollar deals (that “m” could be a “b,” for all anyone knows) but he’s not well-known. While Formula One is the top of the mountain when it comes to motorsport, it is still a niche sport in Canada and for someone like Lawrence Stroll to land serious sponsorship (in which big money changes hands), he’s got to be as well known in this country as Wayne Gretzky, which he is not. Only when you reach the point where Joe Average knows your name will you be able to walk into the boardroom of a major Canadian bank or corporation and not be greeted with a degree of skepticism.

Finally, the show begins. It is wonderful and truly lives up to everything you expect when Formula One is involved. Sergio Perez, the driver from Mexico, is charming and talkative. Lance Stroll, the 20-year-old Canadian from Montreal, needs some media training (if he said “for sure,” one more time, I was afraid I’d scream) but came across as young and sincere, which is what everybody expected.

The only glitch in the proceeding was Perez’s microphone, which was in a headset and it didn’t work. For half the show, you couldn’t really make out everything he was saying. Finally, a technician walked out and passed him a hand microphone.

And how did that happen? It happened because Jason Campbell went backstage and told them to give Sergio Perez a mic that worked. Which is what you would expect. Attention to detail.

Norris McDonald is a columnist for Toronto Star Wheels and a consultant with the Canadian International AutoShow.