Driving a solution...The founder of Magna International has turned his attention to finding a micro answer to a larger question about the future of city driving

Join the Conversation (0)
Frank Stronach has spent a good deal of his 89 years building parts for automakers to develop into cars and retail them. Now he is excited about doing it all himself in the expanding micro-mobility electric vehicle market.

The founder of Magna International is bucking the trend of large-sized EVs, focusing instead on small three- and four-wheel vehicles designed for a driver and one passenger, like a motorcycle.

Stronach announced his plans last April for a three-wheel vehicle called SARIT, an acronym for Safe Affordable Reliable Innovative Transport. It will be three-feet wide, 7.5 feet long and 5.5 feet high with space in the back for the equivalent of carry-on luggage or some grocery bags. He has since developed a pickup truck that will have the same dimensions but will have four wheels and a cargo bed that will support up to 300 pounds. The vehicles can travel up to 100 kilometres on a single charge, with a top speed of 32 km/h.

These micro-rides are designed for commuting in the city, which Stronach – who is also a contributing columnist for the Toronto Star – said are currently clogged with vehicles, in some cases with only one person, a driver, inside them.

Stronach is targeting the U.S. market with his electric vehicle, which is further ahead of Canada in terms of government regulations for three-wheel EV use. They are legal in some provinces, but not in Ontario. He said the three-wheel car will retail for $6,000 U.S, ($7,700 Canadian) and the pickup truck for $8,000 ($10,000).

He said his three-wheel EV enterprise could rank as the “crowning” achievement in his business career. “I can get it to the market. I don’t need anybody else. I have total control,” he said over lunch at his restaurant, Frank’s Organic Garden, that he opened a year ago in Aurora.

Stronach said the idea for producing micro-mobility EVs happened in summer 2020 when he received a call from Premier Doug Ford seeking advice on how to create jobs in the automotive industry. Stronach was later driving in downtown Toronto, and the pedantic pace of the traffic tweaked an idea to produce small-sized EVs.

“It’s a matter of circumstances, being in the right place at the right time,” Stronach said. “You cannot change destiny, right? If Ford wouldn’t have called me, I might not have thought about it. It created something.”

The micro-mobility EV market is growing in popularity around the world, according to Electric Autonomy Canada. The Insight Partners, a market research company in India, unveiled a report in April 2021 that valued the three-wheel EV at $472.5 million ($588.2 million) in 2020 and projects it will reach $756.52 million ($948.78 million) by 2028. The company said manufacturers have increased their expenditure on research and development of three-wheel EVs, which are popular in urban and suburban areas. They are particularly popular in the Asia Pacific region. 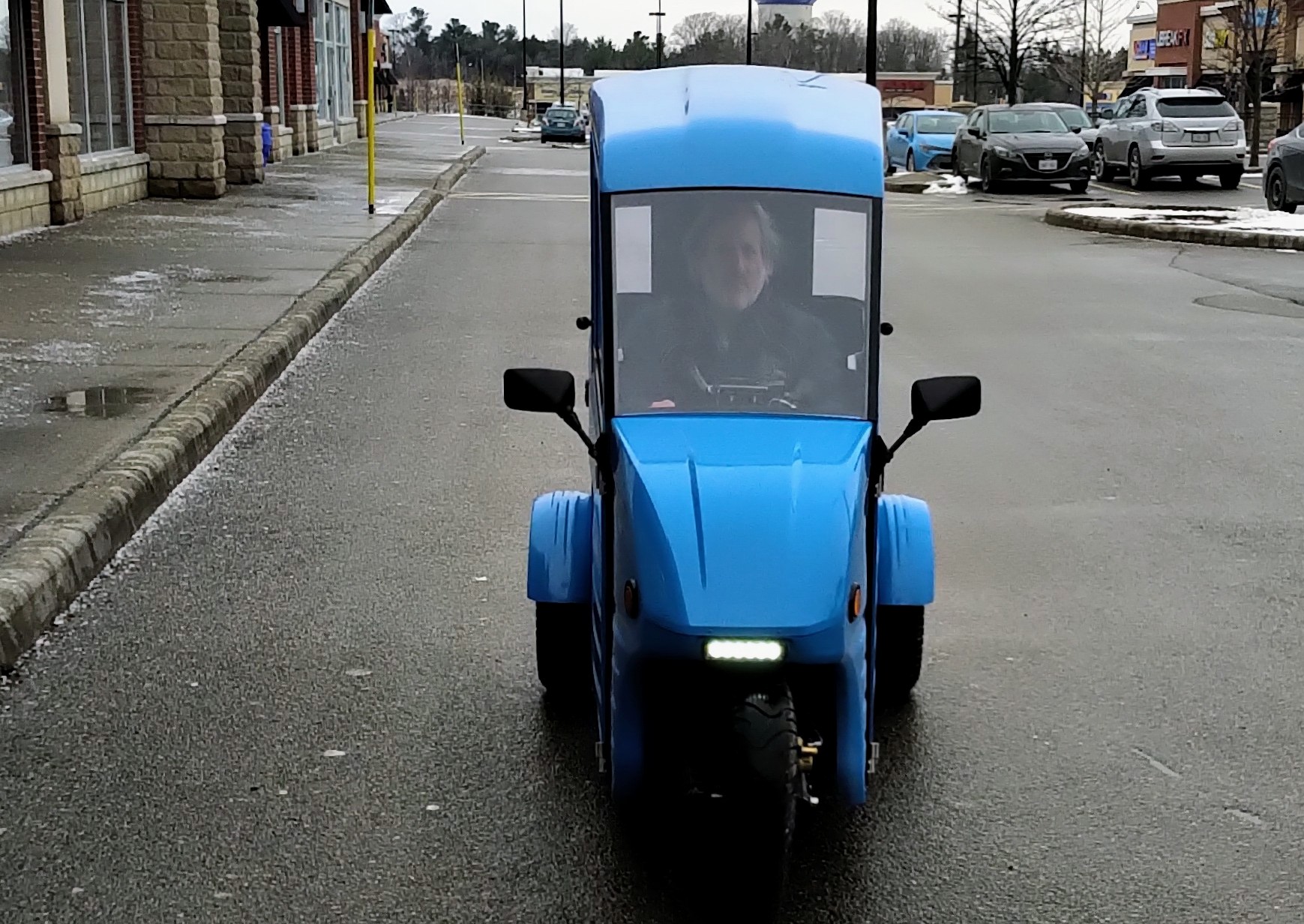 There are several manufacturers that are investing heavily in the three-wheel EV market in Canada. Examples include Daymak International, Microlino, Electrameccanica and Aptera Motors. In almost all these cases, the vehicles resemble traditional vehicles, just smaller in size. They retail from $10,000 to more than $45,000.

Daniel Breton, president and CEO of Electric Mobility Canada, agreed with Stronach’s assessment that micro-mobility EVs will be a more important part of the future for people living downtown in big cities and don’t want to deal with congestion.

“To me, this is rational, logical, it makes a lot of sense, it’s cheap,” Breton said. “Knowing people, it doesn’t mean it’s going to be a success because people often are not logical and rational. I think there is a place for a vehicle like this. It’s going to be very important the way it’s marketed and presented so that people understand what it’s good for and how they can use it. There’s an education piece that’s very important to make sure this type of vehicle becomes a success.”

Aurora Mayor Tom Mrakas lauded Stronach for his innovative thinking insofar as looking at the EV market with a smaller product.

“I think there’s a market for people looking to just get that last mile,” Mrakas said. “When I look at it from Aurora’s perspective, it’s people that just want a small vehicle that they can get from their home to the GO Station, not necessarily to get that vehicle from home to downtown Toronto. I believe that’s what this is really geared toward.”

Stronach is non-plussed about the competition or the fact he is a new player to the micro-mobility EV market. Several years ago, he developed a prototype for an electronic bike that is now being mass produced with as Elby Mobility. He said it’s all about building a better product that factors in safety, price and style. He also plans to use automation to reduce costs.

“It’s who can make a better product for a better price. It boils down to that,” said Stronach. He is is currently building a 65,000 square foot plant in Stouffville for research, which is expected to open in July. Mass production will be done at factories in Canada and the U.S.

The vehicles will begin testing in March at York University. A spokesperson for the university said the project is providing valuable experiential learning opportunities for the students while enhancing campus sustainability as part of EV strategy.

Stronach would not place a timeline when the company will begin taking orders. “I’ve been in the car industry (a long time) and you don’t put a product out there if it’s not perfect,” he said.

“If you’ve got a good yearling or a good two-year-old you will never die,” he said.