Leanne Oliver is watching her son Andrew probe a no-start condition under the hood of a Volkswagen Golf as part of the Toronto Automotive Technology Competition.

“He’s had a passion for mechanical things since he was little, taking engines apart to learn how they work,” she beams.

Despite being strong in mathematics and science courses, the grade 12 student at Whitby’s Father Leo J. Austin Catholic Secondary School prefers getting his hands dirty. Perhaps remarkably, his parents haven’t talked him out of his current pursuit and into medical school.

“We want to see him do what he loves,” says Oliver, who works as an educator. “Hands-on learning is crucial for Andrew. We’ve toured some universities for engineering studies and he’s always asking about opportunities to work on a Formula race car or another tactile project.”

Her son became so proficient at repairing neighbours’ lawnmowers or anything with a small engine, he entered the Skills Ontario competition and won, then travelled to Halifax to compete at the nationals last spring, where he won gold in the outdoor power and recreation equipment category.

Oliver and her husband came to see him compete with auto technician students from 18 Ontario high schools on the eve of the Canadian International Autoshow.

Students were given 120 minutes to diagnose new Volkswagens rigged with identical operating problems by Centennial College instructors. The two-person teams were also tested in electrical, steering, suspension, brakes and engine diagnostics. The event is sponsored by the Trillium Automotive Dealers Association and CarsandJobs.com.

Also observing the timed event was a clutch of auto-shop teachers who had put in extra time coaching their best students ahead of the contest. Some, like Kevin Dea of Bear Creek Secondary School, had travelled from as far away as Barrie to take part.

“There are still kids that eat and breathe cars, but it’s hard to tell which ones will go on to take up the trade,” says Dea about the newest generation of learners. “All you can do is plant the seed. Some of them come back to it five years later and surprise you.”

Part of the problem, says Dea, is that an auto shop course may ignite an interest in the trade, but then they get excited about another skilled profession.

“We have an electrician who teaches for us and he loves to tease the kids: ‘The bank just called me to tell me my bank account is too full.’”

Stories about technicians earning six figures is no longer folklore. Dea confirms it’s easy to earn more than $100,000 in a busy service centre if you have a strong work ethic. And employers are begging for skilled technicians as the long-predicted “retirement tsunami” finally takes hold.

Coincidentally, a Volkswagen representative makes an announcement at the competition, asking for the names of students who are interested in working at area VW dealerships.

One former student of Dea’s who came back to surprise him is Simon Passant, an apprentice who trained at Centennial and worked at a succession of Ford dealerships before opening an independent garage.

“I had the shop for a year and a half, but the days were long and help was hard to find,” says Passant. He eventually decided it was time to switch careers.

Passant enrolled in York University’s Bachelor of Education program in the technical studies stream. He’s on his way to becoming an auto tech teacher just like Kevin Dea, the instructor who inspired him.

“I’m taking a pay cut to become a teacher,” Passant points out. “Inspiring youth is a reward itself.” But he concedes there are some hard-to-swallow aspects to the trade.

“The pay structure is variable; every paycheque is different. Technicians invest about $80,000 to buy their own tools. And the work wears you down physically as you age,” he says.

As a teacher in training, Passant is keen to address the stigma that still dogs the trade: that it’s a destination for non-academic learners.

“You have to be good with your hands and your head. It takes a very smart and diligent person – someone with almost an engineer’s intellect – to properly diagnose and repair today’s automobiles,” says Passant.

After the clock wound down and the points were tallied on Wednesday, students Alexander Liao and Anthony Vecchiarelli from St. Brother André Catholic High School in Markham took home the big trophy along with tools, software and textbooks for their school’s workshop. 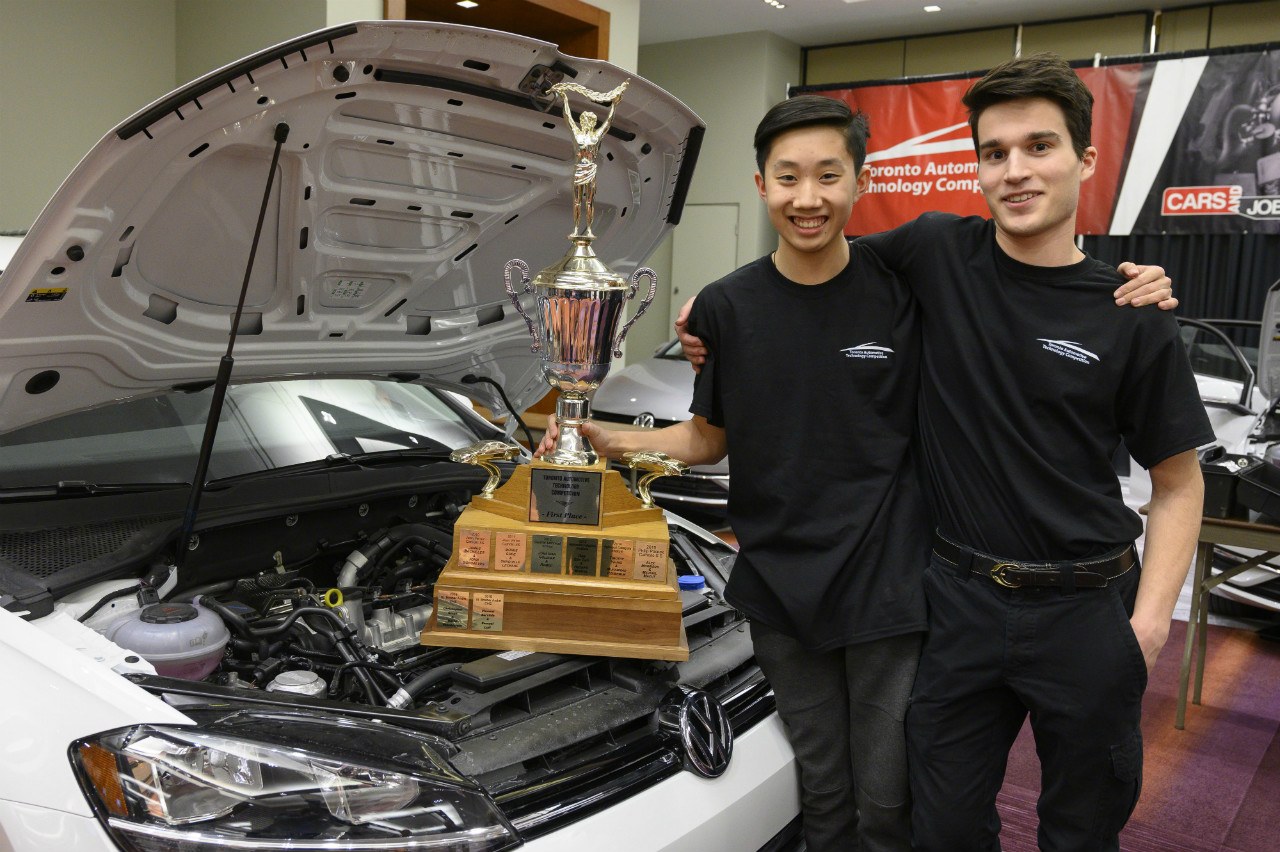 “While he’s considering to study engineering or environmental science, Andrew will always be involved in automotive.”

By Mark Toljagic /Special to wheels.ca