Back in 2018 when Audi introduced its first fully electric e-tron SUV, Audi announced it would have 20 fully electric vehicles on the road by 2025. It was during the 2019 Geneva Geneva Motor Show that Audi introduced us to their first compact electric SUV the Q4. Following up on the Q4 SUV Audi has now added a Sportback version to give its customers a choice of body styles. When launched in production form, it will be Audi’s seventh electrified vehicle to be added to its stable

Here is what we know about the Q4 Sportback:

The Sportback is about the same size as its SUV-bodied sibling.

The length has been increased by one centimeter to 4.6 meters with the width remaining the same at 1.9 meters. The height is the same at 1.6 meters, but with the back sloping down dramatically to a rear spoiler mounted at the lower window edge. This gives it the appearance of being much longer than its sibling.

The Q4 Sportback will have the same drive configuration as the Q4 compact SUV utilizing two electric motors mounted on each axle that will produce a combined power output of 225 kW and put the power down to the road via Audi’s quattro all-wheel drive system. The electric motors receive their power from an 82-kWh battery pack that uses the whole underfloor area of the vehicle between both axles and gives the Q4 Sportback a range of up to 450km. Zero-100kmh is reached in an impressive 6.3 seconds and up to a restricted top speed of 180kmh.

Externally the Q4 Sportback showcases a closed octagonal grille that sports Audi’s familiar four-ring logo. Its flared fenders take their design cues from the original Quatro from 40 years ago giving it a muscular stance that is enhanced by large 22-inch wheels.

The interior benefits from the 2.77-meter wheelbase making it spacious and airy, and the lack of transmission tunnel adds to that spacious feel and brings the interior capacity near the top of its category. 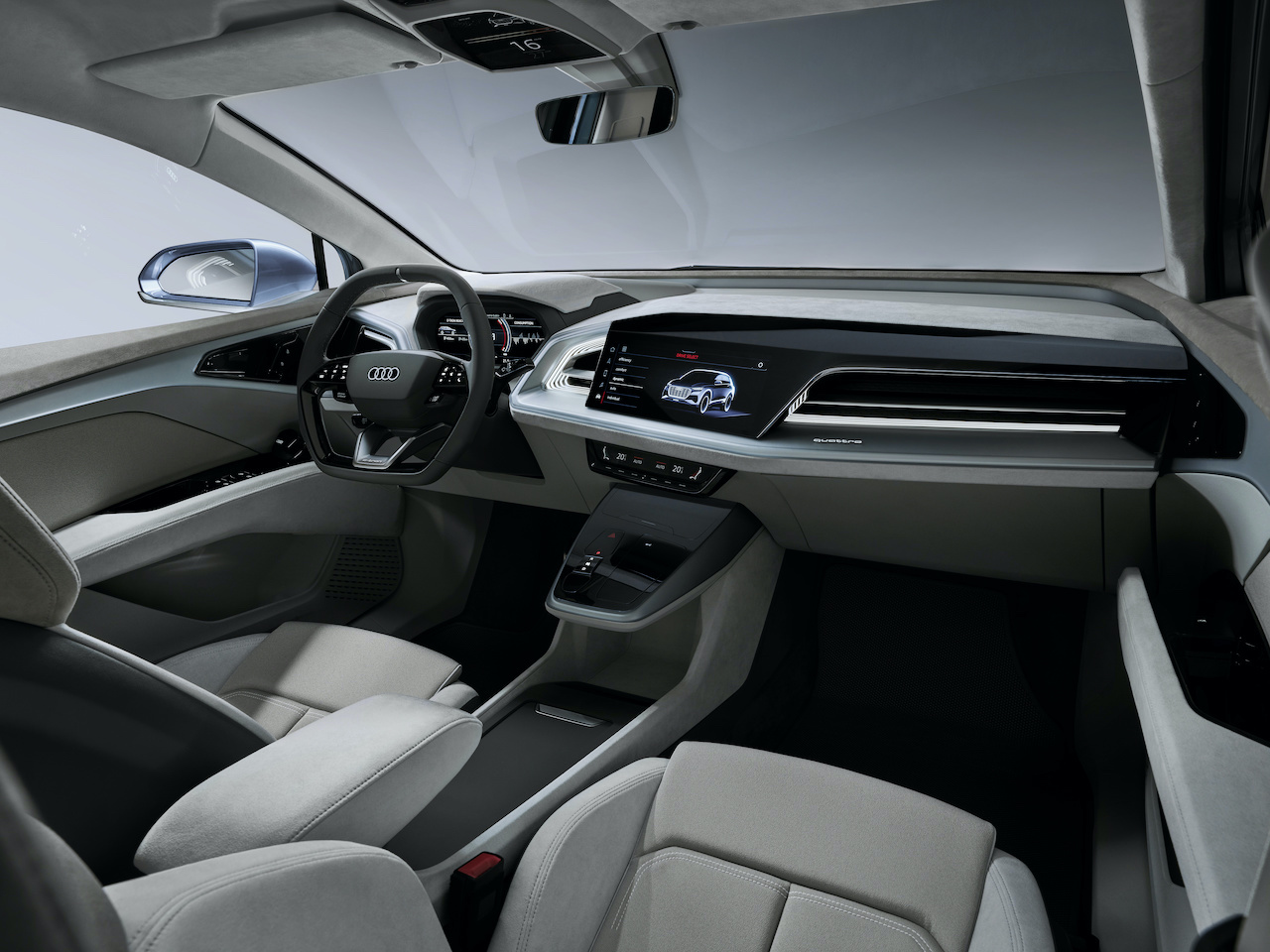 Window pillars, upper door finishes, and dash panel are finished with beige and white microfiber materials. Seating and headrests are upholstered in double-stitched Alcantara materials and are finished to the highest of standards. The center console is free of any controls and is designed as a large storage compartment that includes a cellphone charging mount.

To help increase range the Q4 Sportback has a rear wheel drive bias with the rear motor that producing 150kW and 228 lb-ft of torque and the front motor producing 75kW and 110 lb-ft of torque. The electric all-wheel drive system redistributes power to the front motor when needed especially before slip occurs on slick surfaces, heavy cornering, and is also used to prevent under or oversteer.

The Q4 e-tron Sportback concept will be available as a full production model in 2021.