Aston Martin's making of a star

Andy Palmer, the President and CEO of Aston Martin Ltd., isn’t quite sure whose idea it was to get together with Red Bull Racing to design and build an exotic sports car known as AM-RB001, which will be on display for the first time in North America at the Canadian International AutoShow when it opens to the public on Friday.

He just knows it happened in a pub somewhere in the English countryside.

“It’s difficult to say,” he answered, when asked who approached whom. “I’d worked with Christian Horner (Red Bull Racing’s Team Principal) for a long time, particularly when I was at Nissan and putting together the deal between Red Bull and Infiniti,” in which the Formula 1 team traded technical expertise with Infiniti and the luxury car brand supplied Red Bull with millions of sponsorship dollars.

“When I moved (to Aston), Christian and I had a general catch-up; it was one of those conversations around, ‘What if?’ So, we agreed at a pub that we’d do something. I knew that Adrian (Newey, Red Bull’s design and engineering chief) wanted to do a road car at some point in his career, and I needed to make a statement about where Aston is positioning itself, and so it (the car) was born out of some sausage, egg, and chips.”

What was born is, essentially, a ground-effects F1 car that accelerates, brakes and corners like the real thing but that you can drive on the street. Maybe not you. Or me. But for those who can afford the $3-million-plus price tag, it will be like driving a work of art to, well, work.

The car is expected to be the star of the show when the annual AutoShow, sponsored by the Toronto Star and Wheels.ca, opens for its 10-day run on Friday, Feb. 17, at the downtown Metro Toronto Convention Centre. 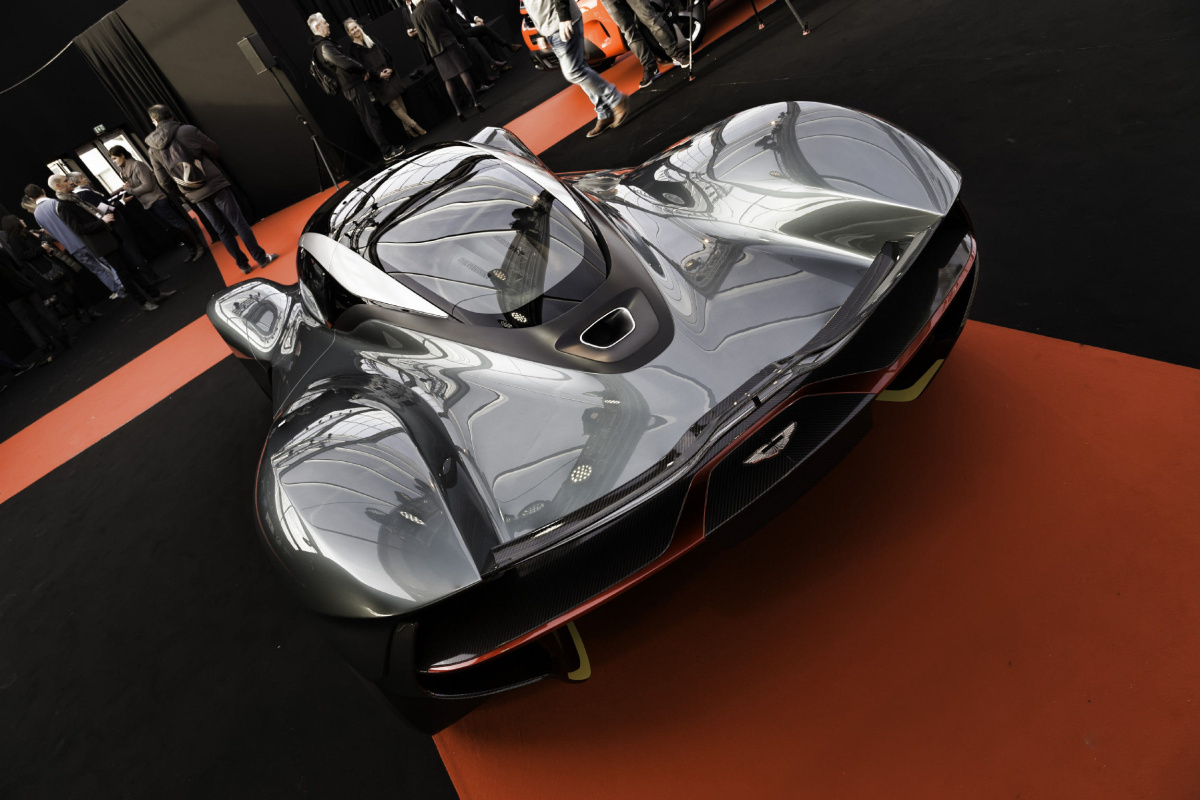 “We’ll build 150 for the road and 25 for the track,” he said during a trans-Atlantic telephone chat we had last week. “That total will include all the prototypes, and that’s important, because there are other manufacturers who will give you a number and then they’ll add on some derivatives and they’ll sell the prototypes and you quickly get to a much bigger number overall.

“What we’re saying is, including prototypes, including the cars we crash, the track cars, basically there will be 150 homulgated for the road and a maximum of 25 for the track. Regarding that 150, we’ve already had more than 600 requests and we’re fully deposited on 450 cars.”

He didn’t say how interesting it will get deciding who among those who’ve already put down a significant amount will actually get to write a cheque for the balance and be home waiting the day it’s delivered. Nor would he talk in any detail about Canadian involvement in the project, although he acknowledged there was a significant amount.

Palmer — a most interesting fellow who initially started his career as an automotive products apprentice and went to night school to learn how to be a manager — is only 53 but has now been at the top of two automobile companies.

Through a combination of hard work, even higher education (he now has several university degrees) and force of personality, he rose to be Chief Planning Officer and Executive Vice-President of the Nissan Motor Co., and is now in charge of one of England’s premier automobile brands.

Once formal talks got going, the project didn’t take long to come to fruition. Once finished, the hypercar will be a real piece de resistance.

“I think we started the conversation two years ago but very conceptually,” Palmer said. “About a year ago, we got seriously moving. The concept model was shown privately at the first Grand Prix race of the season last year at Melbourne, then more publicly at the Monaco Grand Prix and that basically was representative of direction. We will freeze the surfaces of that car basically this quarter, then we will start the prototype manufacturing process, so we should have a prototype car running on the road by the end of this year. And we go into production in 2019.

“The concept that will be at the Toronto show is updated from Monaco. It’s closer to being production representative.”

That’s what showgoers will see when they approach the Toronto Star/Wheels.ca display area where the concept will be exhibited. Shiny stuff. Dark, but shiny. Once finished, the hypercar will be made of a combination of aluminum, carbon fiber and titanium. The internal-combustion engine will be a naturally aspirated V-12 built specially for the AM-RB001. The power-to-weight ratio is expected to be one horsepower per kilogram. It will be a rocket.

Said Palmer: “This will be the fastest production car in the world. It’s as quick as a fully trimmed Formula One car around Silverstone (site of the British Grand Prix).”

He acknowledged that there would be a hybrid element in the car.

“There will be what the Formula One boys call a KERS system (Kinetic Energy Recovery System), so there will be some electrical assist. Interestingly, it can help you at getaway and we don’t need a reverse gear. Reverse is done in electric drive and that means you can shorten and lighten the gearbox. When you deal with Adrian, who is obsessed with weight and aerodynamics, he takes you to a completely different level from a normal car manufacturer and he obsesses over grams.”

Moving from the hypercar to a more general conversation about the automotive subjects du jour — electrification and self-driving cars — Palmer had interesting observations on both.

“Electric cars,” he said, “are front-of-mind for many people, mainly because the industry sees it as the next competitive element. One reason the electric car has probably been legitimized is because of the Volkswagen Diesel-gate incident. The headlong sea change toward going electric has meant the whole German industry has gone electric. From that perspective, undoubtedly, the debate about whether it’s hydrogen, whether it’s electric, I would say that debate is now over because it definitely is electric.”

Having said that, the guy who introduced the all-electric Nissan Leaf to the world had words of caution for the pro-electric crowd.

“We have to put it in perspective. I think I’m relatively bullish, but I expect that 25 per cent of the annual sales of automobiles will be electric by around 2020-2025. So it’s not 75 per cent, it’s not 100 per cent: the gasoline engine is not dead.”

Palmer said there’s an awful lot of mystery and misunderstanding about autonomous (driverless) cars. “A lot of hype,” he said.

“If there are five steps (from no assistance from technology all the way up to the car driving itself), step three is when the electronics assist you to drive but the driver is still fundamentally in control. You can get to that relatively quickly. I would expect that to happen by 2020-2021.

“The next step, which is hands-off, eyes-off, is an awful long way away. I think there’s an awful lot of hullabaloo around it.”

Palmer believes there’s another, more serious, issue facing cars that drive themselves and are connected to each other, and that’s security.

“My own preoccupation, and this is the direction I give to Aston, is that we’re a driver’s car, so we’re not in a rush to go driverless. My own deeply held belief is that first you have to solve the cybersecurity issue of cars, because once you go more and more autonomous, once you go to more points where the car can be attacked, you have all sorts of other risks.”

A racer as well as an executive, Palmer — who has a family that includes a wife and four children — likes to drive cars in competition as well as leading the companies that make them.

“I try to do endurance racing — GT4, GT3 if I can aspire to it,” he said. “The next race at Brands Hatch is a 20-minute sprint — there’s a couple every weekend — and then I’ve got a 24-hour race at Silverstone, and then a couple more later in the year, one at Spa and hopefully one in Texas (Circuit of the Americas).

“I’ve got the greatest job in the world, and I have these cars at my disposal, so why not enjoy them? And I didn’t say I was a good racing driver. I’m OK — I think.” 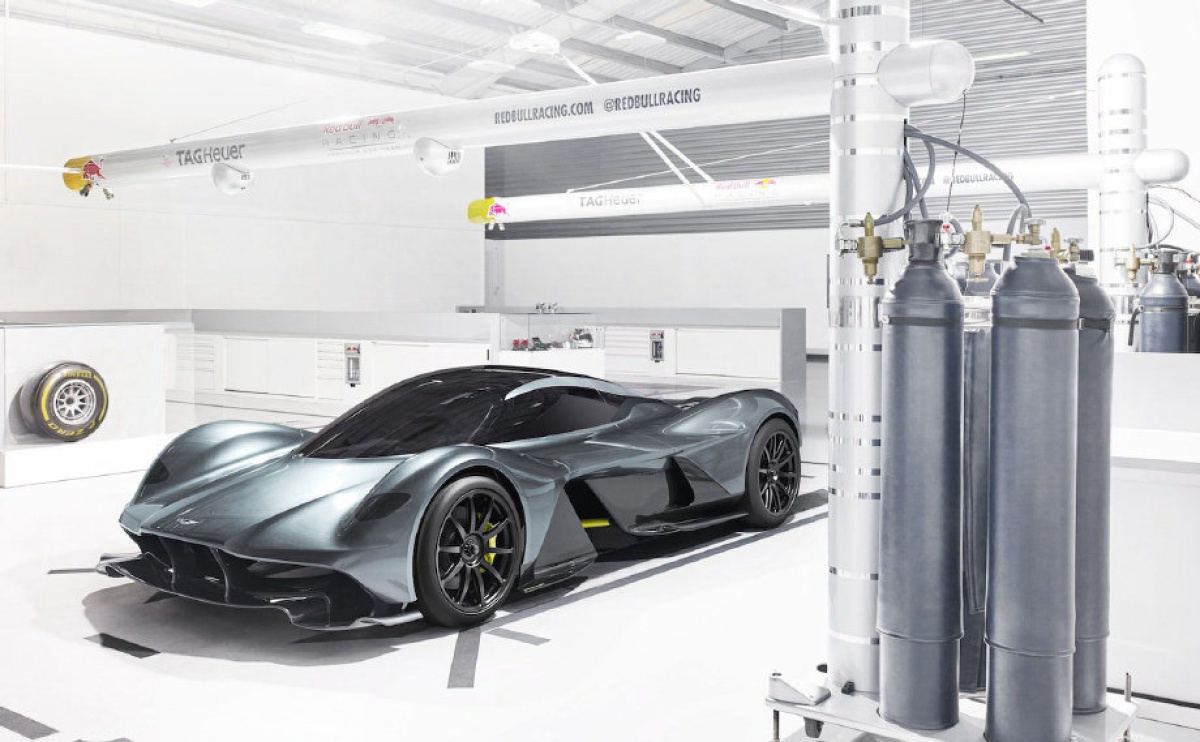 AutoShow bringing the best of the best

While the Aston Martin-Red Bull Racing hypercar is expected to be a huge hit, there are many other attractions on offer at this year’s Canadian International AutoShow, which opens at the Metro Toronto Convention Centre in downtown Toronto next Friday, Feb. 17.

First and foremost, this is an auto show designed to display more than 1,000 new cars and trucks that are on sale across Canada this year. But within that whole, there are many parts.

For instance, green technology will be on display, with manufacturers offering up 29 electric, hybrid and alternative fuel vehicles. Several will be making their Canadian debuts at the AutoShow, including the Swiss-built Oasis autonomous/electric concept car designed to show what future mobility in downtown city centres might look like.

Introduced at the CES show in Las Vegas in January, the Oasis was a hit at the Detroit Auto Show a week later, and it was there that Canadian AutoShow GM Jason Campbell made arrangements for it to make its Canadian debut at the Toronto show.

Speaking of Hyundai, they have a global unveiling planned but are keeping quiet about details until Media Day on Thursday, the day before the show opens to the public, when all of the Canadian manufacturers will be holding press conferences to unveil their new products.

On the 100 level, showgoers will find a special display/exhibit celebrating 50 years of Grand Prix racing in Canada. This year marks the 50th anniversary of the first Formula 1 race in the country — held at Canadian Tire Motorsport Park (previously called Mosport) — and among the exhibits is the car that Canadian star Jacques Villeneuve drove to the 1997 world championship. As well, a car raced by his late father, Gilles Villeneuve (a Ferrari), and a Ford Mustang he drove around the south of France when he raced in F1, will also be part of the display.

Tickets for the AutoShow can be purchased in advance at www.autoshow.ca Seniors 60 and over can purchase tickets at the gate at a discount (weekends and holidays excepted), and certain days are set aside for special events, such as Family Day on Feb. 20 and Super Tuesday where tickets (online and at the gate) will be discounted, thanks to RBC. The Volkswagen Family Admission pass (two adults and two children for $45) is also available again in 2017.

And something new at the AutoShow this year will be Auto Show Live, where panel discussions and one-on-one interviews are planned. Sessions scheduled three times a day are guaranteed to entertain and inform. Check the auto show website (autoshow.ca) or the Toronto Star’s free tabloid newspaper, available each day at the show, for lineups.