Are you ready for a high-performance, side-by-side three wheeler?

DISTILLERY DISTRICT, Toronto – What’s Powerful, Green (think Nickelodeon slime) in colour and can allegedly achieve 60mph from a standing start in 3.9 seconds? What is powered by BMW’s K1600 GT motorcycle engine and produces 160 horse-power at a spine-tingling 7,750 rpm – and yet can clock a quarter mile in 12.6 seconds? Finally, what weighs 525 kilograms, is 138 inches long, 78 inches wide and has the driver and passenger’s posteriors clearing the deck by just a few inches?

That’s not to say that Campagna Motors is a one-trick pony. Far from it. Completing the performance-oriented roster is the V13R – a roadster with earned attitude, powered by its Harley Davidson V-Twin engine: a muscular, open-cockpit vehicle intended for the rider who heeds the call of the highway.

Let’s be clear. Campagna Motors, originally founded back in 1988 by Daniel Campagna, can lay claim as the only three-wheel, side-by-side recreational vehicles that offer exclusive design and high performance – and are completely street legal!

A car with the heart of a motorcycle!

To hear a simple explanation of these vehicles, co-owners since 2008, André Morissette and David Neault sum them up quite succinctly. “A car with the heart of a motorcycle!”

While three wheeler motorcycles are nothing new, most recently associated with the character Piney Winston from the television show, Sons of Anarchy, riding around on his Harley-Davidson Electra Tri-Glide (or as some refer to it, a trike), they were often viewed with some scorn by true biking enthusiasts. This machine had one wheel up front and two in the rear.

If the idea of a trike was looked at with an evil eye, one can only imagine the derisory opinion held by critics of the Can-Am Spyder, another three-wheeler – two in front, one in the rear. However, the Spyder, especially when cornering, handles like a sled. Built by a company with tremendous experience and depth in the design and manufacture of snowmobiles – which is how many riders have described their handling ability. This machine, like Piney’s trike, could carry a passenger – but in behind the driver in the “pillion” position, something you will never have to entertain if you drive a Campagna Motors product as the passenger will be on your right hand side – just like most automobiles on the road today. 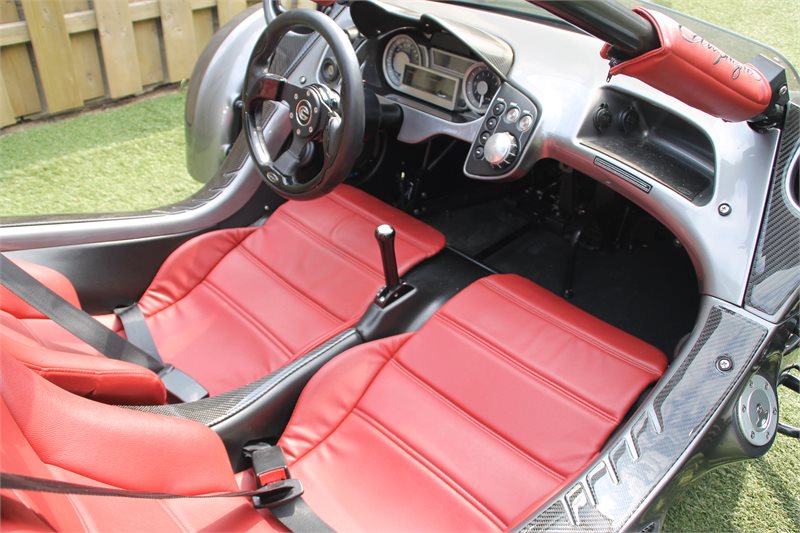 While we are unable to comment directly on how either one of these fascinating machines drove, anecdotally they have been described as quite exhilarating.

We did hear, “Drive it like a car, but act like you’re on a motorcycle” a number of times from Campagna representatives.

Here’s how we would translate this from the perspective of either the T-Rex or the V13R. Getting in and out of the door-less vehicles does require a little agility and flexibility – note to self – remove the steering wheel next time. Once in, it feels as if you have descended into a low-slung position (think Apollo space capsule position) – one which personally I am not comfortable since I prefer driving with less straight arms for better control. The foot pedals can be adjusted for position as can the “seat” – which really feels more like a leather sling shot harness. Looking forward, line of sight is pretty good. However, in rush hour urban traffic, “seeing” around the automobile in front would be difficult since you are really only inches from the pavement itself and you tend to be lower than anything else on the road: bear in mind, you’re pretty much at muffler level of most cars. While there are mirrors, attempting to adjust them to take into account blind spots (they do exist) you really will have to look around often to sense traffic and road conditions. This will mean sticking your head off to the side, outside the relative safety of reinforced roll bars to do so. All the while, repeat the mantra “act like you’re on a motorcycle”. In other words, you must be aware of your surroundings and the vehicle itself at all times. While deemed street legal, meaning helmets are not required, three-point seat belts are mandatory for driver and passenger – making the aforementioned head maneuver difficult – to say the least. 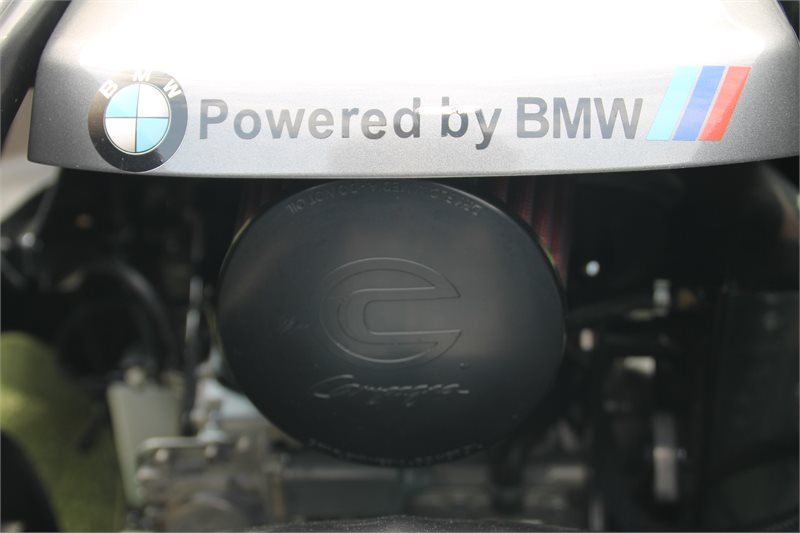 One more thing, since they are classified as a side-by-side vehicle, they are not considered to be a motorcycle (although powered by well-known motorcycle power plants), a G licence is the only mandatory license you will require to pilot one of these metal, carbon fibre and fibre glass rockets.

The T-Rex is geared to a younger male driving enthusiast, likely 30-55 years old, with a lust for speed, and quite possibly has enjoyed sport bikes before. With constant road feedback and responsive handling and steering including a digital instrument panel, a 180-watt four speaker Alpine sound system, ride selection, Bluetooth and other electronic amenities – all yours for $57,999. 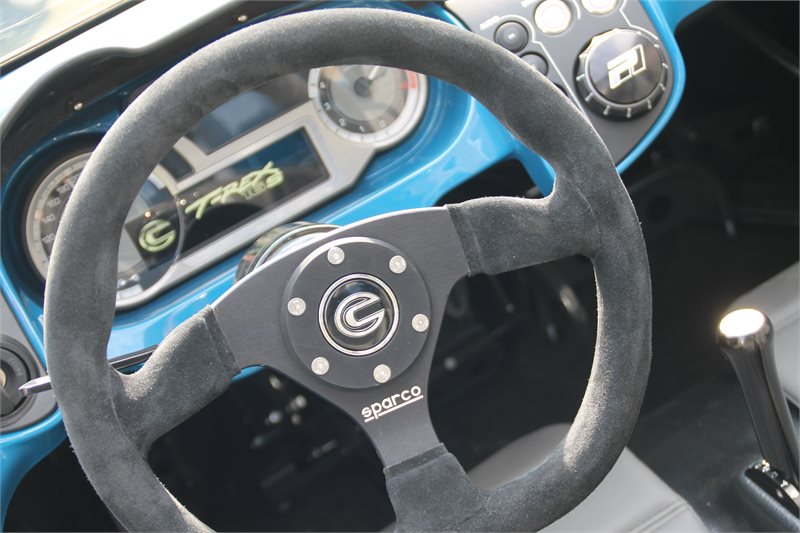 The V13R is geared to a slightly older demographic, one who has likely previously enjoyed cruising the highways and byways on a classic all-American Harley Davidson available starting from $53,999 – with a little less in the electronics that a T-Rex owner might prefer.

Sure to catch anyone’s eye – in a parking lot or on the open road, their unique look and engineering separate them from the conventional three-wheeler crowd. Whether the market in Ontario and points west has an appetite remains to be seen. Other than the engines, these driving machines are custom built to order, designed and engineered in Boucherville, Quebec – which explains, in part, the price tag.

As André Morissette explains it, “We create unique vehicles for extraordinary people.”

Will you be one of them? 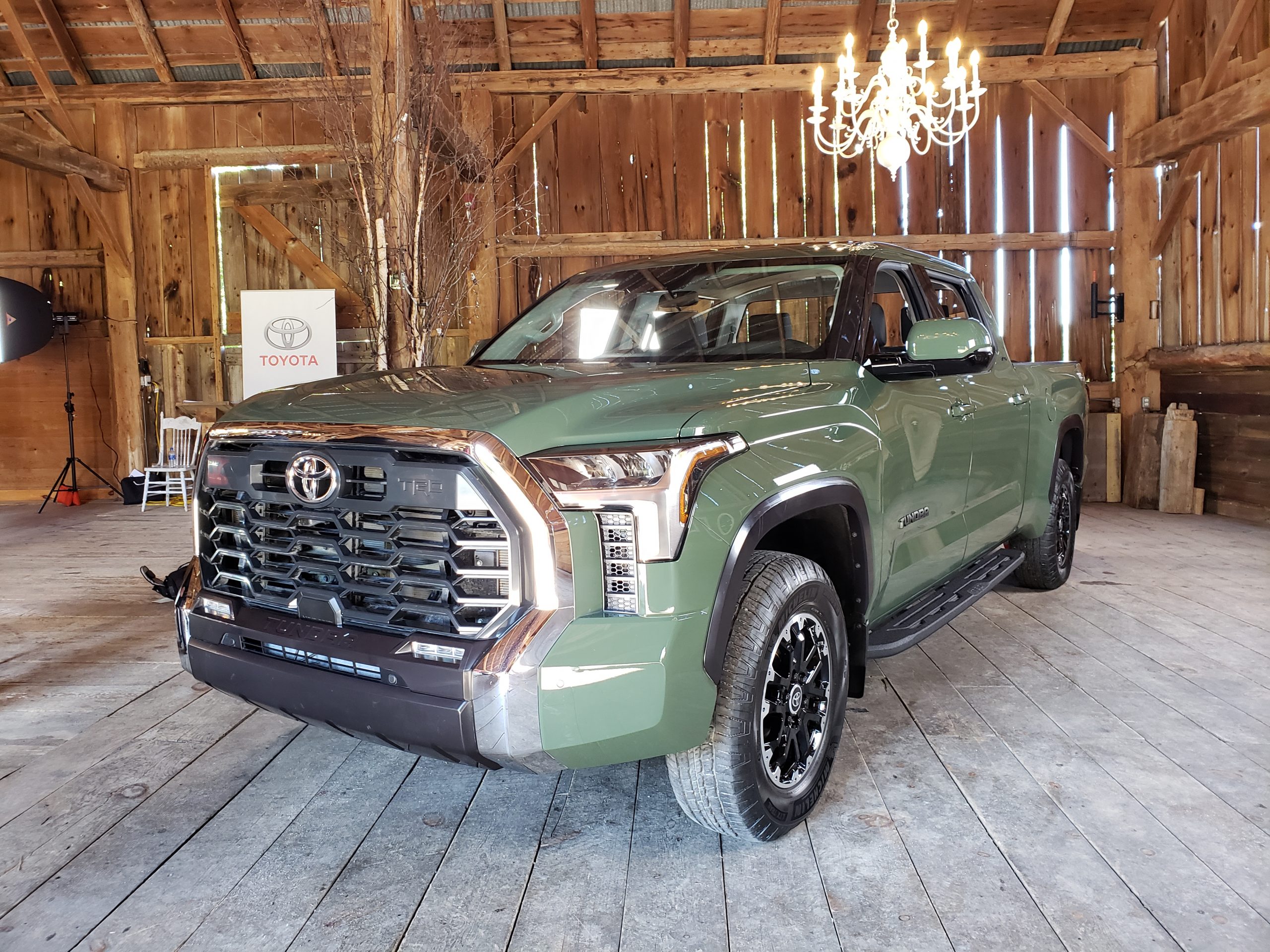