Are “All-Weather” Tires Any Better Than All-Season Tires?

We slid two identical cars with different tires through snow and slush challenges to find out.

I’ve had a pretty precarious relationship with winter tires. My first car was a 1997 Mustang that I hauled out of a junkyard. It needed everything. Brakes. A new fuel system. A new engine. Exhaust. And of course, rims and tires.

It also needed all the paychecks I had saved up from my part-time job at the local Tim Hortons. I saved money where I could. Most of the parts, including the brakes and fuel system, were OEM replacement stuff. I had a local muffler shop put together an exhaust out of whatever they had lying around (that would pass emissions) and the “new” engine came out of a wrecked ‘94 Thunderbird.

A number of things I didn’t bother fixing. The tachometer only sometimes worked. So did the remote door locks. Mercifully, the power windows never failed, which was great because for a brief time, I couldn’t get the driver’s side door open and would have to “Dukes it” out of the window (okay, I could have just gotten out of the passenger side, but where would have been the fun in that?).

One area I didn’t skimp on was the rims and tires. I ended up fitting the car with a $1,600 set of Cobra R rims and Falken performance tires (245/45R17s if memory serves). The rest of the car was a complete pile, but the rims and tires really made up for it. Because my measly 190 horsepower (on a good day) had no chance of breaking lose the sticky summer tires, I could toss the car around with zero fear. It seemed like a really good decision at the time. And certainly, one worth burning through my entire piggy bank of Tim Horton’s paycheck for.

But I wasn’t thinking about the winter. Fitting my rear-wheel-drive, live-rear-axle, front-heavy coupe with winter tires? In Ontario? Never crossed my mind. My teenage brain was convinced that a Mustang fitted with super-wide, super slippery performance tires would somehow be just fine in the winter.

The good news is that I spent that winter learning how to “drift” pretty good—spinning out in the middle of intersections and going through parking lots sideways. Which all seems like fun and games, except I did love-tap the occasional snowbank… and one time my classmate’s ‘93 LeBaron in our high school parking lot (Josh, if you’re reading this, I swear there was no damage—I mean, come on, you clearly didn’t notice and it’s not like you even have the car anymore).

I got rid of the Mustang after that winter. Instead, I committed to daily drivers that were particularly good in the snow. A 2004 Pontiac Grand Prix GT. A 2005 Ford Explorer XLT V-8. A 2007 Cadillac STS-4 V-8. All amazing performers in the snow. So much so I never thought about putting winter tires on them.

Then I bought a Mazda RX-8. Remembering my very slippery, very sidewise winter in the Mustang, I thought winter tires might be my only hope in taking the little Mazda anywhere during the winter months.

Not to oversell it, but snow tires on a Mazda RX-8 turn the car into a pretty decent little winter warrior. Sure, this was a car with great weight distribution and stability control— which no doubt went a long, long way to aiding driver confidence even in ill-conditions—but the difference was still apparent between the all-seasons and winter tires. So much so that it was enough to turn me into a believer on the merits of winter tires.

Still, it can be difficult to convince others to put winter tires on their cars. Certainly, when I was driving my Grand Prix, for example, I wouldn’t have been motivated to shell out for a set of winter tires. Having to swap them out and store your extra set is a headache. They also make an awful lot of road noise. Not to mention, I figured the car handled just fine with all-seasons in the snow.

Kal Tire gave us the opportunity to put that last bit to the test. And sure, Kal Tire would be very pleased to sell you more tires (that’s like, you know, their whole business) so they have a vested interest in your vested interest in winter and “all-weather” tires.

However, they also felt pretty confident on the merits of the winter and all-weather tires and the extra safety value provided to the average driver. So, they invited us down to slide around a few bone-stock, new Volkswagen Jettas through a number of snowy challenges. 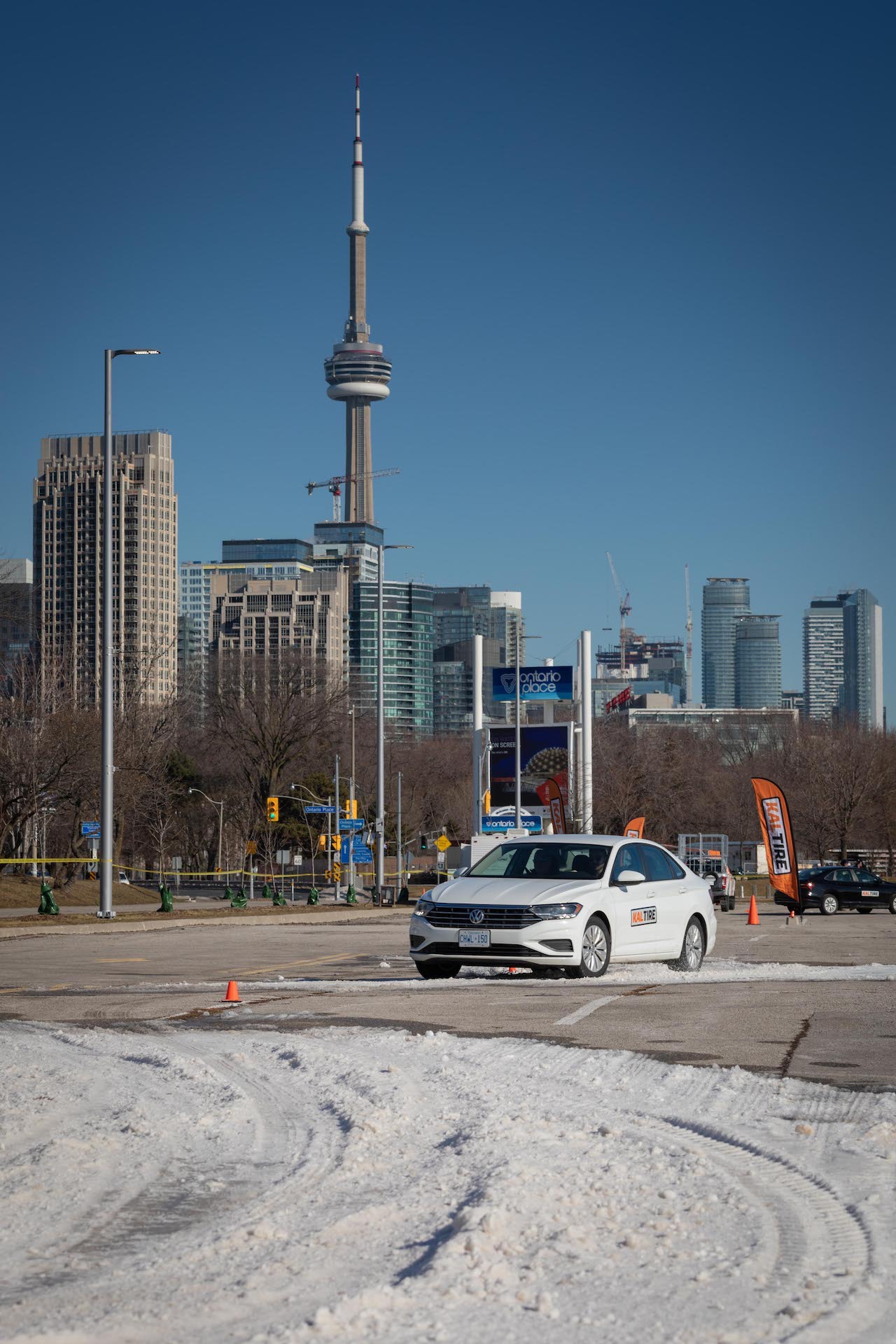 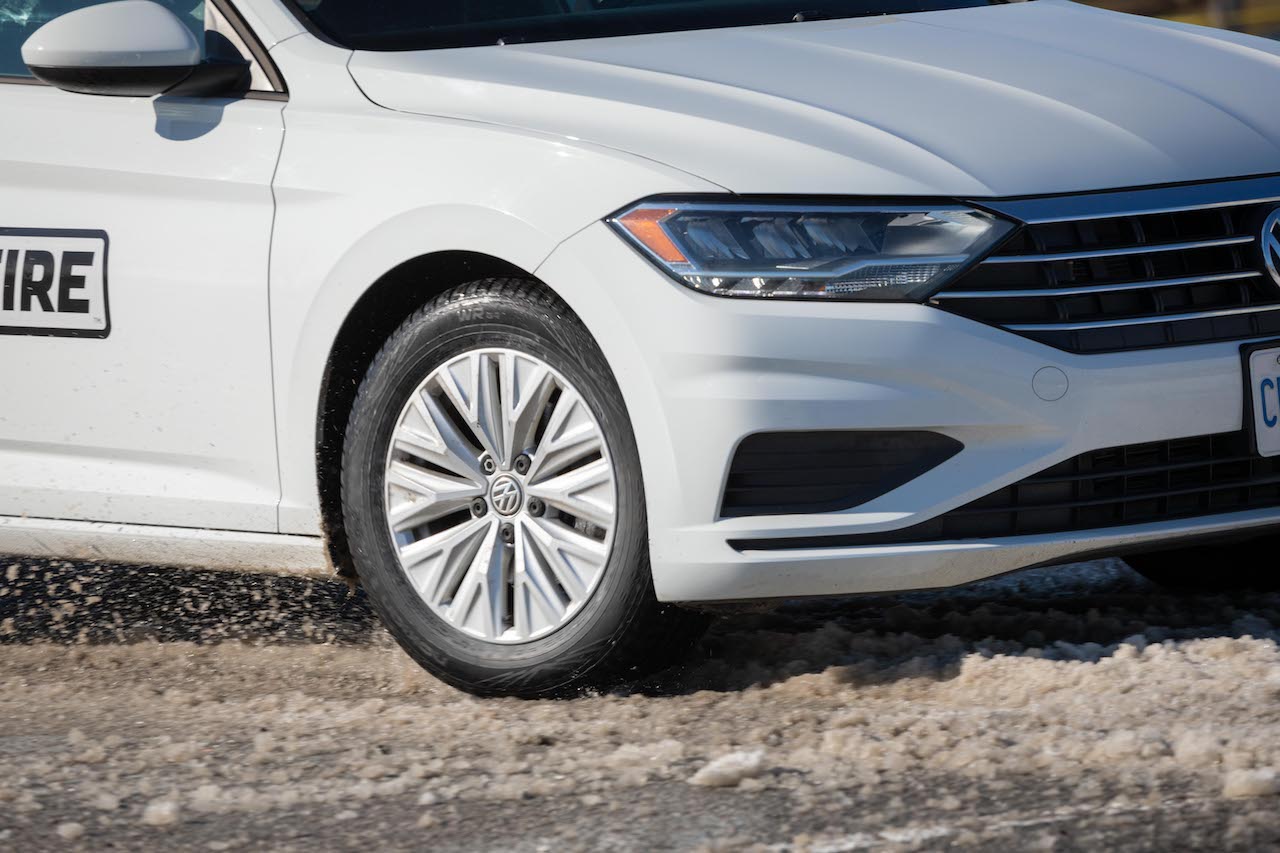 Kal Tire recognizes that swapping winter tires on and off can be tedious for motorists. And so they’re promoting the “all-weather” tire as an alternative.

“All-weather” touts the same abilities as winter tires while not necessarily forcing you to swap them in the warmer months. They’re kind of two tires in one. The inside of the tire has a tread pattern like a winter tire, whereas the outside is patterned like a standard all-season.

While I can’t speak to how well this hybrid tire would hold up for summer driving, I can say that road noise on all-weather tires is greatly improved over a traditional winter tire, so is ride comfort. This is perhaps down to the tires’ “Silent sidewall technology” and “silent groove design.”

Anyway, they will apparently continue to perform in conditions as low as -45C, utilize ‘Blade Grooves” to push snow and slush out of the way and “Snow Claws” to maintain grip in the wet.

But did they make a difference in performance?

Our first test was braking on a snowy surface. At 50 km/h, the Nokian WR G4 stopped about 3 – 4 car lengths behind the all-season car. It was about the same result at 60 km/h. Also the ABS feels the need to hammer a hole through your right foot when you do this test in the all-season car. 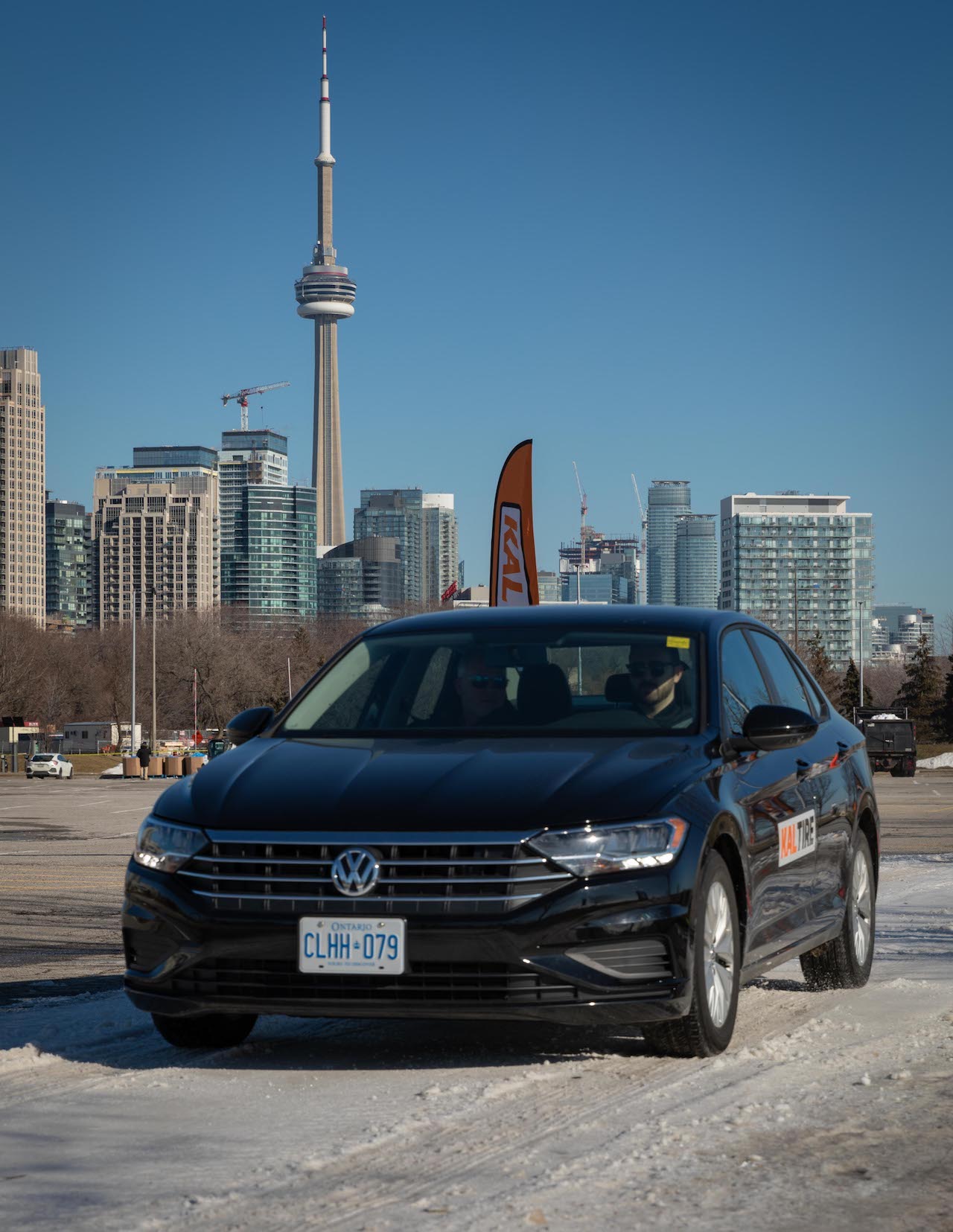 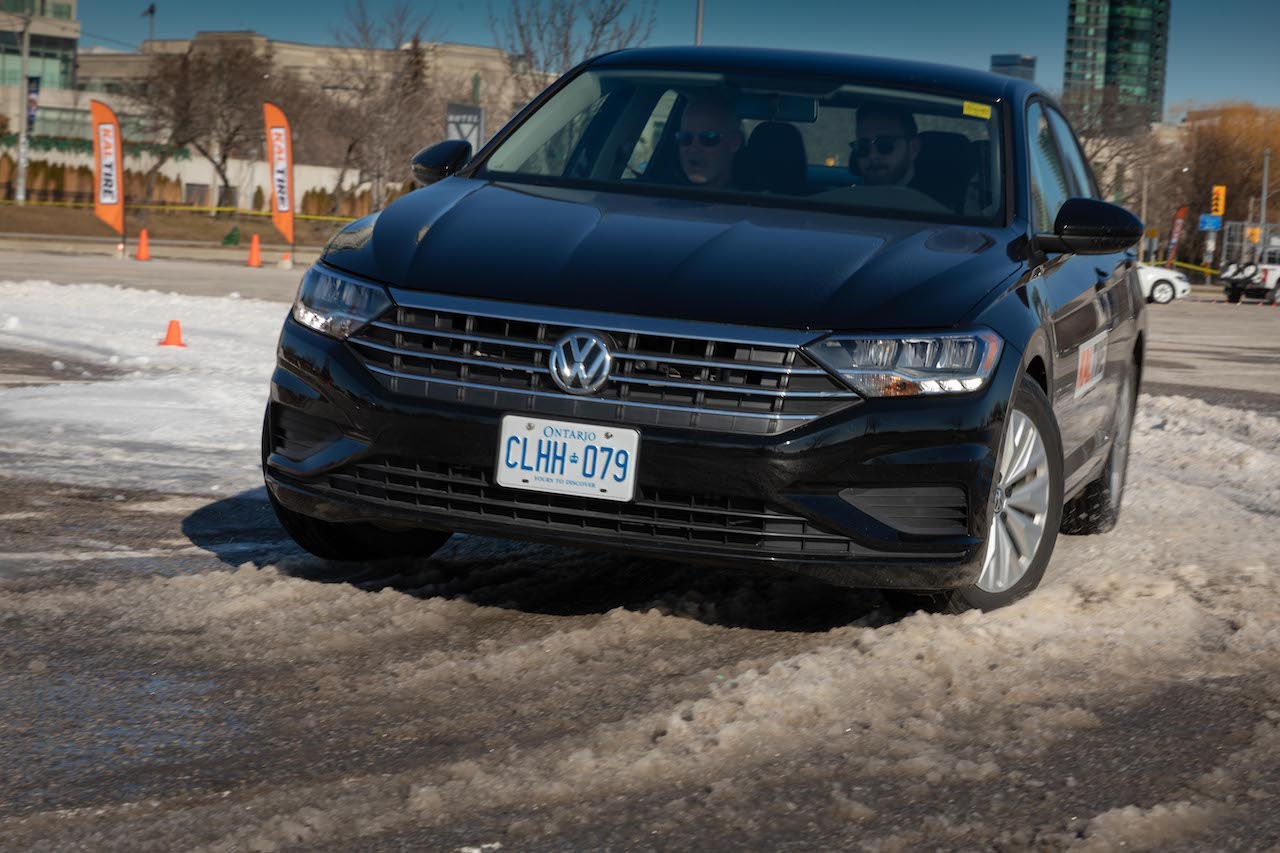 Next, we tried to get through some constant, sweeping turns at speed (read, “driving in a circle”). Not only would the all-season car oversteer dramatically over the snowy surface, but the traction control would light up like a Christmas tree, constantly cutting power and forcing overcorrection. We couldn’t do it much faster than 25km/h. The Nokian-equipped car had no problem doing the same trick at 35 km/h with no cumbersome traction control stepping in to cut power.

Finally, we put both cars through a slalom test with much the same results. The all-season car lit up its traction control again and experienced a good amount of body roll—whipping back and forth through the slalom at just 25 km/h. The all-weather car fared much better; limiting body roll and getting through the slalom much more confidently at 35 km/h.

So, yeah, all-weather tires seem to work pretty well. Certainly, you can make the case that they’re a safety upgrade over all-seasons. It’s not hard to imagine scenarios where more stopping power or the ability to keep the car in a straight line—and not in another lane, would be a good thing.

But I think the real benefit to all-weather tires is driver confidence. If you’ve never slid a car around before, and you get caught in some nasty weather and your car starts doing things like oversteering, power-sliding, kicking in the ABS and traction control, it might cause you to panic. Which is the absolute worst thing you could do.

What was most notable to me with the all-weather tire is just how un-dramatic they were by comparison. Sometimes a lack of drama is a good thing. Especially when you’re sliding sideways through your high school parking lot (again, Josh, I am so sorry). 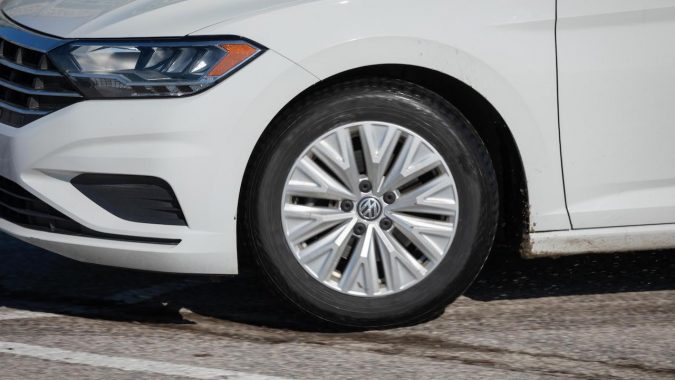 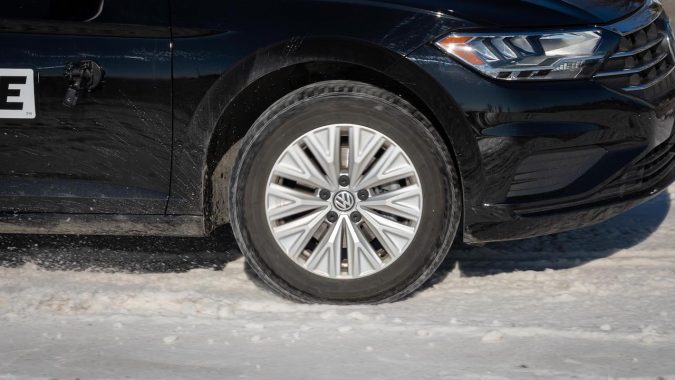 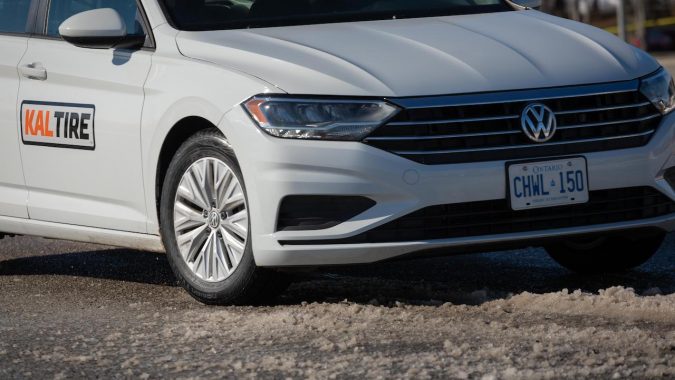 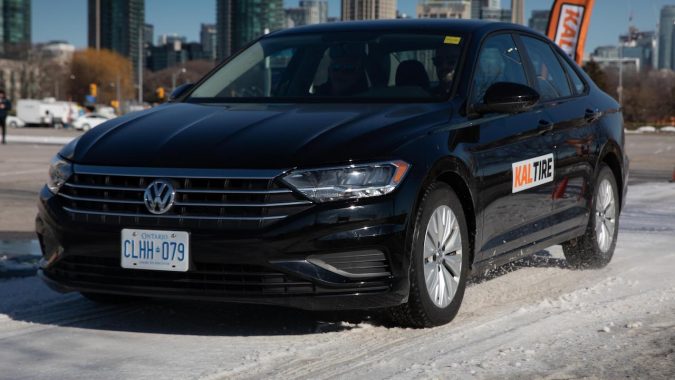 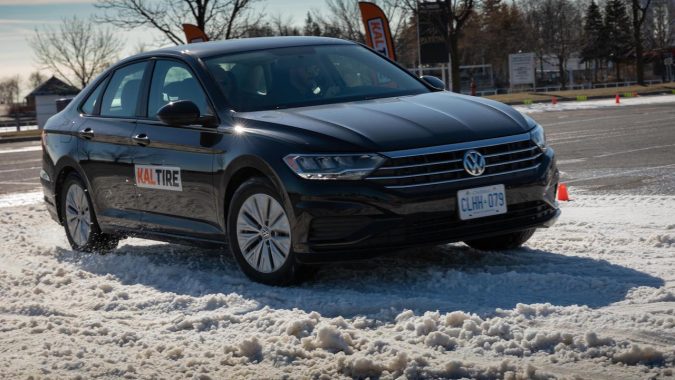 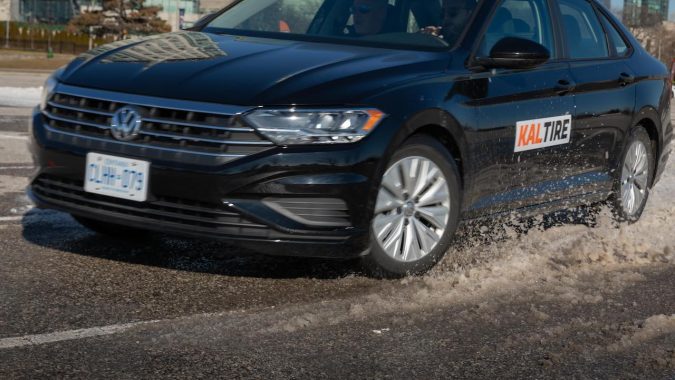 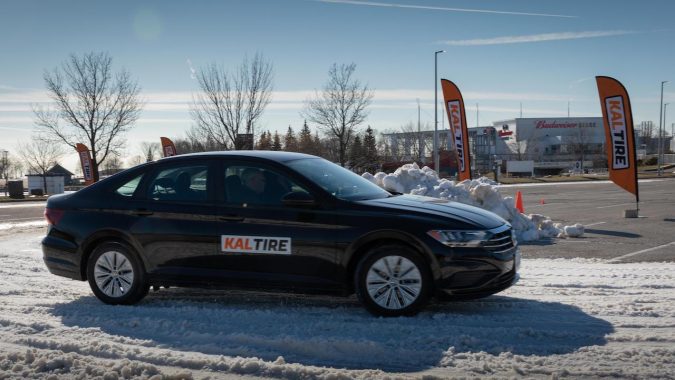 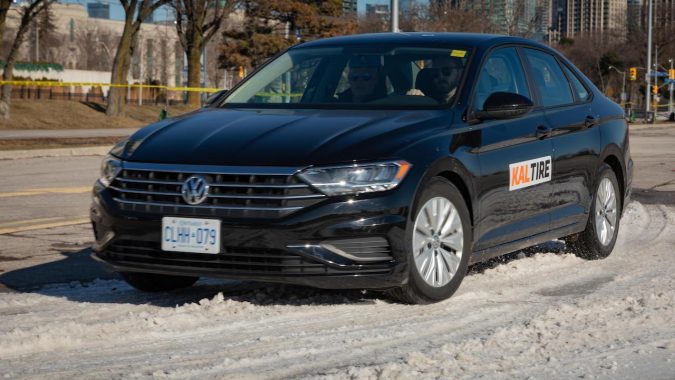