An Off-season Road Trip in an Army Green Toyota

Author’s note: We began planning this little road trip in the Fall and took the actual trip several weeks before Covid-19 became a thing. While we very much encourage you to follow our lead and make an off-season trip without the kids, we urge you to put off such a trip until the world goes back to normal.

“50-year old shocks the world in itty bitty swimsuit photos” a headline of the sort that regularly appears in today’s lifestyle publications.

It has been said that 50 is the new 30, or something along those lines. The reality that more, ahem, mature people can be just as hot, if not hotter than the traditional, more youthful vision of what is attractive. That modern view of hotness seems to be equally applied to not only the males and females of the human species, but also to trucks if our recent weekend with a certain aging SUV is any indication.

Toyota Canada has created somewhat of a tradition in recent years, as the late Fall or early Winter plays host to a push on the TRD-Pro model line up. Rather than hosting a full on press event this season, Toyota reached out to a select few outlets to create their own adventure to put their most coveted trucks to the test. Schedules being what they were, Mrs. Grant and I would not be able to get a weekend away from our business in the food industry until late February. Not exactly the time to be testing the offroad prowess of any vehicle without a support system in place, so we decided to opt for a foodie adventure in Prince Edward County, just a couple of hours east of Toronto.

Our steed for the weekend would be the 2020 Toyota Sequoia TRD-Pro. While the visual of two adults taking a road trip in a full-sized, three row SUV might seem somewhat off at first glance, take a look around the local grocery store parking lot. How many parents do you see going shopping for the family, solo, in a Yukon or Explorer? Mom and Dad taking the family troop carrier away for the weekend is a pretty normal thing.

While some of the competition are barely of debutant age, having recently undergone total overhauls, the Sequoia, now in its second generation, is comparatively of Cougar age, having been on the market in the current configuration since 2007 when it was introduced as a 2008 model.

The thing is that the Sequoia is a relative unicorn on the market, with just a tick over 3,000 units being sold in Canada over the past 5 years. To put that number into perspective, Ford has delivered more than 76,000 Explorers during the same time period.

Partially due to solid exterior styling from the get go, and partially as a result of a certain level of rarity, the Sequoia continues to be an attention grabber on the road, particularly in the TRD-Pro trim, when finished in Army Green paint. In fact, the Sequoia garnered as much attention as we’ve had during drives with any first edition sportscar. 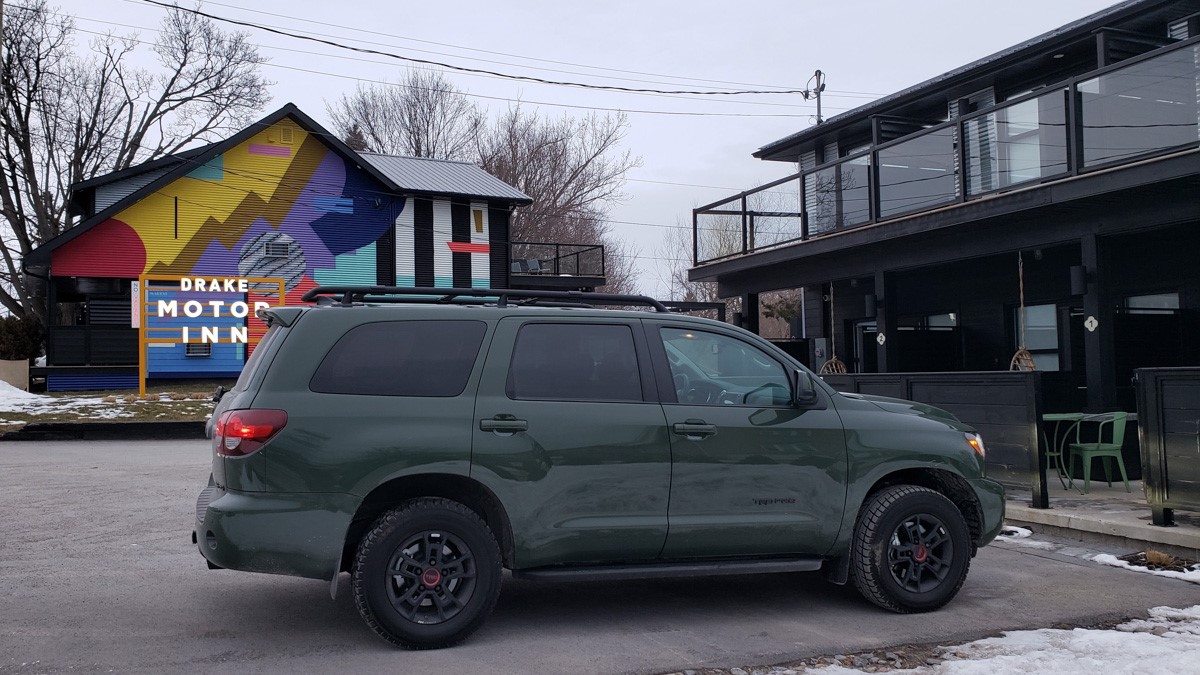 To be brutally honest, when I heard that Toyota was creating a TRD-Pro version of the substantially sized Sequoia, I was bemused, because the same packaging for the 4Runner and Tundra really do turn those two machines into serious off road machines. Who the heck is going off road in a vehicle the size of a Sequoia, beyond perhaps conquering a cottage road during Spring run-off?

As one might expect, the TRD-Pro package applied to the Sequoia is indeed largely an appearance package, with one exception. The addition of 2.5” internal bypass Fox Racing shocks, makes for a seriously smooth ride on rough roads. More on that later.

The rest of the package is a well thought out combination of items which are either visual or functional in nature, or both. Perhaps most notable is the roof mounted cargo rack, which like the Army Green paint is a love it or leave it feature. My own beater (a rugged old Nissan Xterra) has a similar rack which has been used for everything from hauling bicycles, kayaks and camping gear to Christmas trees, so I guess you could say that I approve of the functionality offered by the rack. The other side to that of course is that it is so very high that actually putting stuff on the rack might not be feasible for some users. 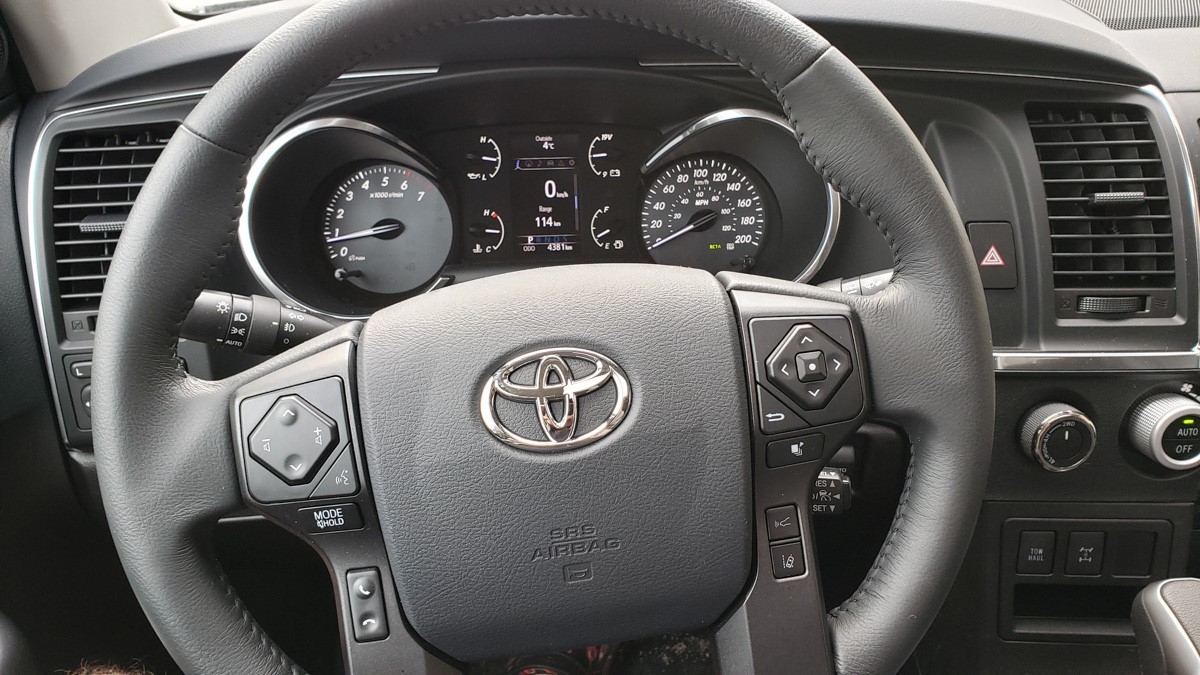 In the cabin, there is no question that the Sequoia is an old school truck, which for a certain segment of the public, myself included, is a good thing, while others may consider the interior dated. Hard plastic surfaces are the norm and while they may lack a certain level of tactile feel, they do offer a practical useability in that they wear well and are easy to clean.

The captain’s seats for the front four occupants are comfortable and the third row looks as if the kids would be equally comfy. I didn’t attempt to crawl back there myself. It is worth noting that unlike some three row vehicles, there is still a very functional cargo space even when the third row is in the upright position.

Unfortunately, most road trips involve a dose of highway driving, and like other vehicles in the class, the Sequoia offers a comfortable highway experience once you get past the slightly guilty feeling of two people tripping in an absurdly large vehicle for the task. Where the TRD-Pro package comes into play is when the transition is made to country roads. This is where our big green friend proves that the Fox Racing shocks are more than just a cosmetic upgrade.

For decades now, when serious truck enthusiasts begin personalizing their truck, the first change is often to replace the original equipment shock absorbers with one of a handful of aftermarket versions. Why is something that nobody will ever see so important? Simply because the shocks offered by companies like Bilstein and Fox Racing make an unbelievable difference in the way that a vehicle handles, not only in the rough stuff, but on normal streets too. You may ask why then, do manufacturers not include them in their regular production vehicles. The short answer to a very complicated question is cost. The Good Stuff costs substantially more than a manufacturer can spend for more run of the mill supply chain type products. 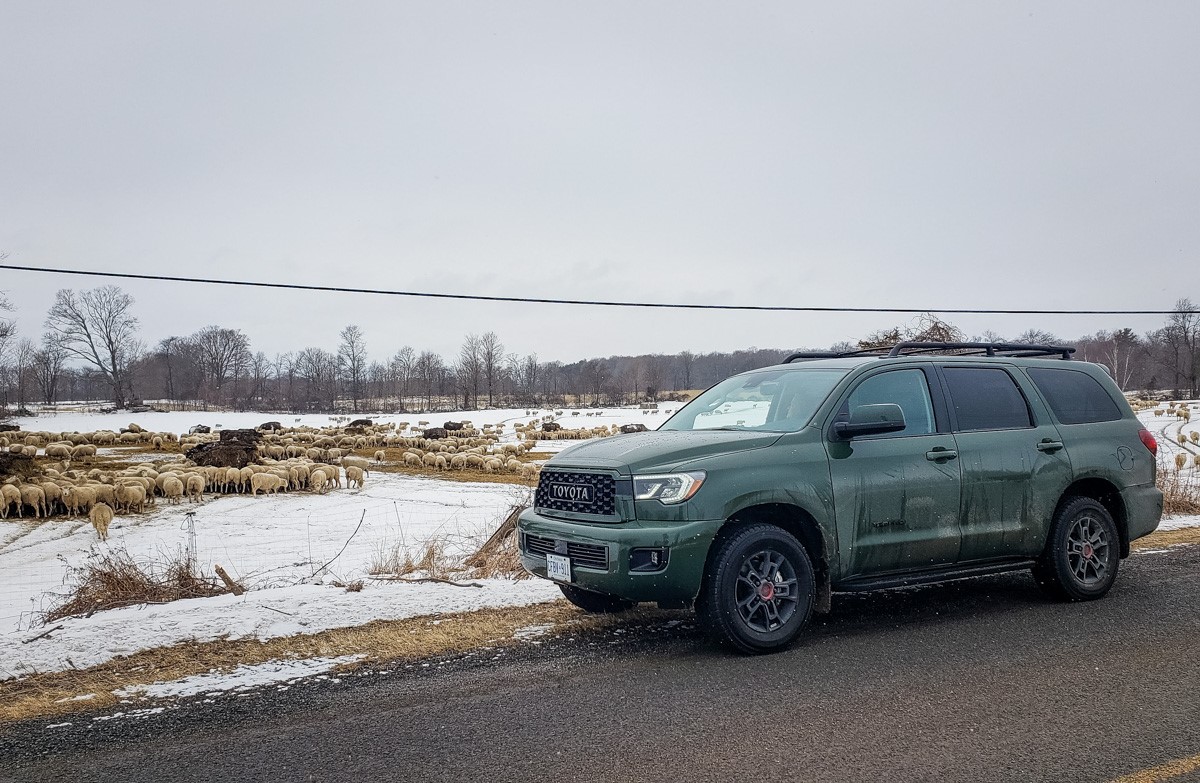 Leaving the highway and heading onto some of Prince Edward County’s back roads, The Hulk came into its own, taking Winter ravaged pavement and gravel road washboard and turning them into a silky smooth surface. Some connector roads in The County are little more than a single lane goat path and yet cruising at 80 KM/H there is no difference than on billiard table smooth tarmac.

Our destination for the weekend was a new-ish spot in Wellington known as the Drake Motor Inn. Reminiscent of old school drive up motels, the most coveted rooms feature a private parking spot right outside your own private patio. Owned by the same folks who operate Toronto’s Drake Hotel and Drake Commissary, the Motor Inn is just a three minute walk from the renowned Drake Devonshire, home to one of the best dining experiences in The County.

Directly outside the back door of the Motor Inn, on the other side of the river that runs underneath the main part of the Inn, lies the Midtown Brewing Company. This delightful family owned craft brewery offers wood-fired pizza and fantastic breakfast options. A neat aside is that the owners drive a new TRD-Sport Tacoma, which naturally meant they were also excited to see our big green steed.

The beauty of visiting any touristy area in the off-season is that not many tourists are visiting, especially during the colder months. That means that premium rooms can be booked easily, often for a more pleasing price than they fetch during high season. It also means that staff have more time to chat, if you are so inclined. Everybody seems more attentive in the off-season. 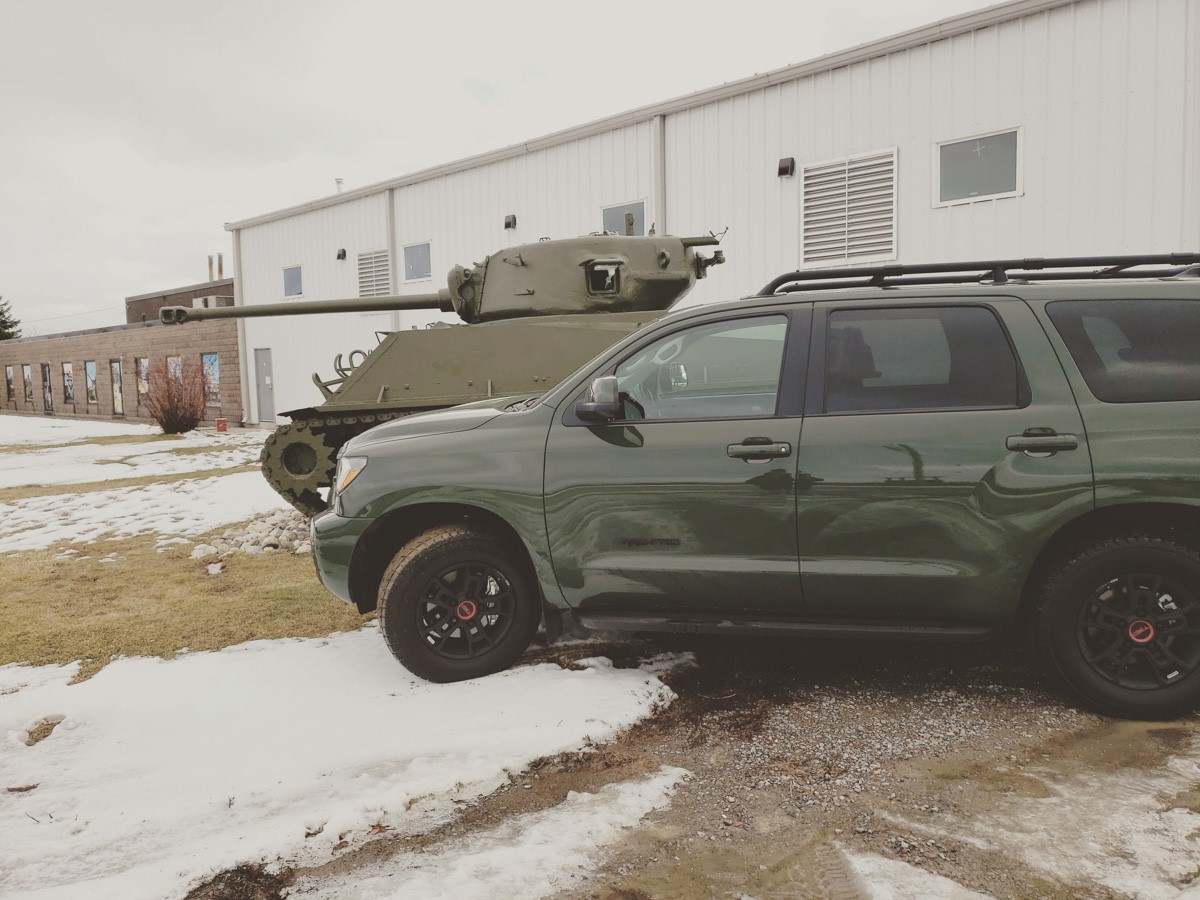 Of course the downside to visiting wine country in the cooler months means that some smaller businesses may not be open when you visit.

One of the dirty little secrets of automotive journalism is that members of the media usually travel like rock stars, staying at the best hotels, sampling the best food and booze that corporate dollars can buy. The sad reality is that auto journalists travel in packs, so they often don’t realize that they are being treated differently from the rest of the hotel guests. Also, most of these seasoned travellers actually aren’t foodies, so the quality of food offered often goes unnoticed. It is kind of like giving a kid a $30 burger when they would be happier scarfing a $1.99 McDouble.

Bearing that in mind, we arrived at the Drake Devonshire to receive a super warm welcome from staff, all of whom were well briefed that some media guy was coming to review the joint. Our reception almost felt exaggerated until we realized that the staff simply didn’t have anyone else to talk to!

The Drake Devonshire is also the entertainment hub of The County, offering not only a top notch dining experience, but also having an uber-cool space that serves as a live music venue, all just steps away from Lake Ontario. 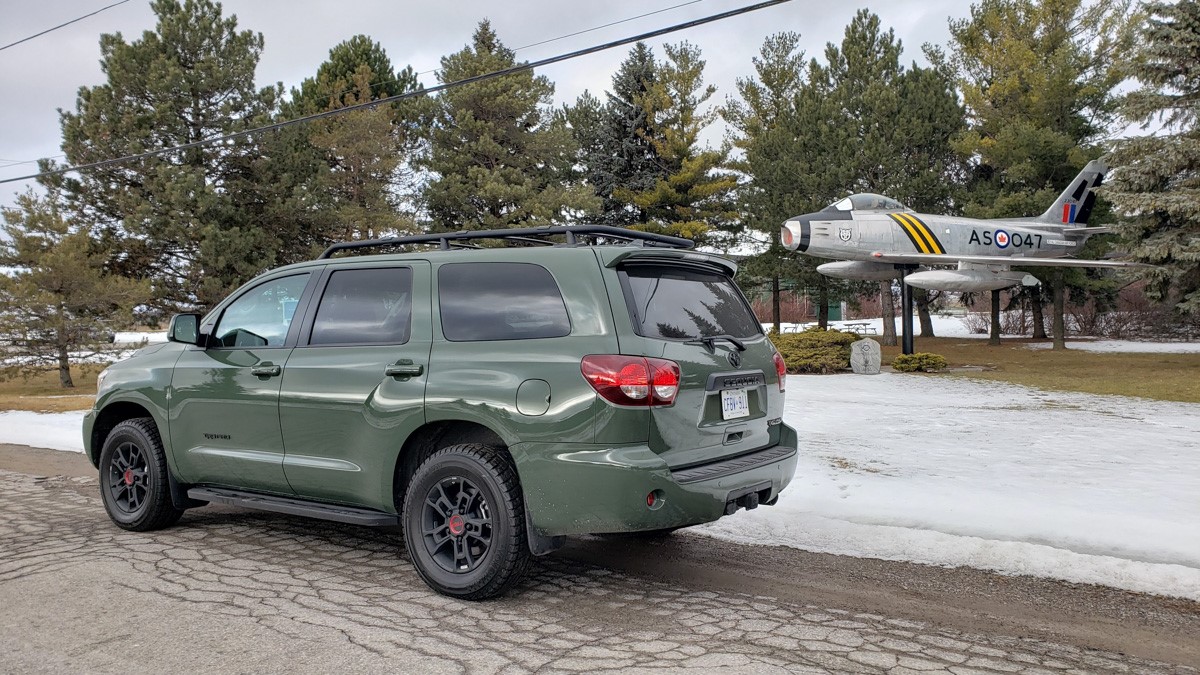 The County is home to literally dozens of wineries ranging from tiny Mom & Pop operations to large scale producers. We tend to gravitate to more unique spots like By Chadsey’s Cairns, a small operation named after the original owner who had erected stone cairns around the property. Legend has it that he did so to guide himself home after committing suicide over the grief caused by his wife’s passing.

Many of the smaller vineyards are tucked away on back roads, without any signage on the main streets, which means that the best way to explore Prince Edward County is to take a turn down random gravel roads and just go. You never know what treasures you might find.

At this point, Spring has arrived and yet all we can do is daydream about future road trips. Once the dangers of COVID-19 are controlled and we are allowed to get out and explore again, it is going to be really important to support small businesses within our home province. Towns like Wellington, which are just a short drive from major cities like Toronto and Ottawa, are going to provide the perfect escape from reality that we all are going to need. 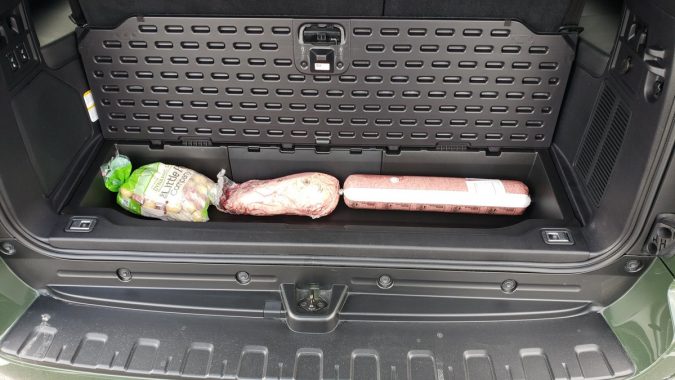 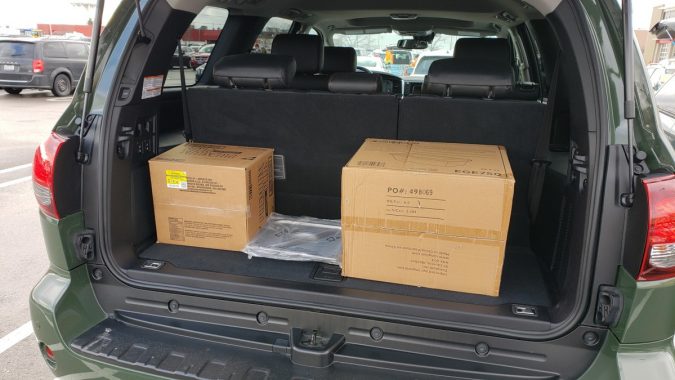 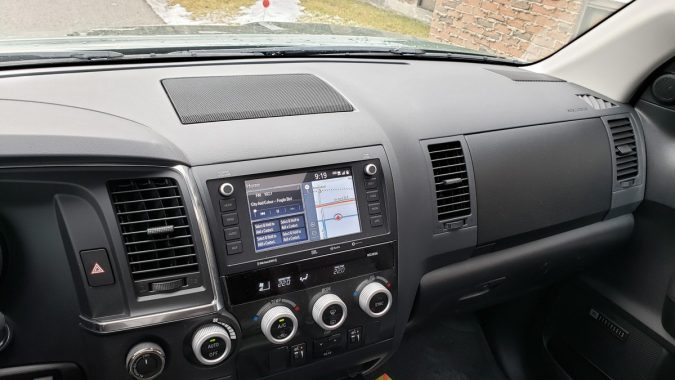 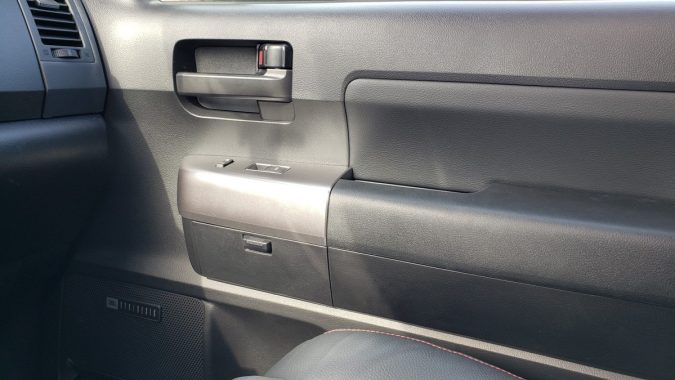 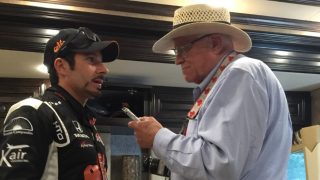