Genesis, the upmarket entity from the house of Hyundai in Korea, has been making waves in the luxury market since it was spun off as its own brand about five years ago. Of late, it’s been taking the competition to school with rigs like the excellent all-wheel drive GV70 crossover and sumptuous G80 sedan. Now, they’re looking to take a piece of all-electric pie with their GV60.

And yes, gearheads, we’ll talk about Drift Mode ahead of all other considerations. During a call from Korea with Wheels, the Genesis crew walked us through what they feel will bring a jolt of excitement to the EV segment. It’s no secret that some carmakers have long figured out that electric cars can be ultra-quick, a delightful perversion of technology that was originally intended to save fuel while schlepping us around in soulless transportation pods. It’s like weaponizing a solar farm.

All-wheel drive performance models will pack 429 hp and 446 lb-ft of torque, which Genesis says should be good for a zero – 60 mph time of about four seconds. A tempting switch in this trim is found on the dash, labelled ‘Boost Mode’ which adds an extra 50+ ponies and 77 lb-ft of torque on demand. This is good news for those of us who prefer our vehicles – especially electric ones – to be more than appliances. Standard models will have 225 hp in rear-wheel drive configuration and 313 hp in all-wheel drive.

To accompany this feature, Genesis gearheads have incorporated a hidden Drift Mode into the GV60’s driving characteristics. Why is it hidden? Because, unlike some other vehicles with this feature, it requires a bit of a dance with the brake pedal and steering wheel paddles in order to activate. Get it right and you’ll apparently be able to coax the thing into easy oversteer, thanks to electronic gubbins which will distribute the car’s power in an entertaining manner (read: mostly to the rear). Note, however, that Genesis did specifically tell us they have no plans for a performance sub-brand in the vein of what AMG is to Mercedes or N is to Hyundai.

So that’s all good news for the drivers amongst us. What about those who simply wish to pop to the shops or take the kids to school? Genesis says the GV60 will incorporate technology such as a facial recognition camera in the driver’s door pillar, unlocking the car when your arms are full of groceries or wailing children. Promotional videos also showed the GV60 being parked over a wireless charging pad, juicing itself like a smartphone without the need to plug in, and a biometric fingerprint reader stands ready to recognize the driver and start the car. However, it remains unclear if these features will be available for the North American market. 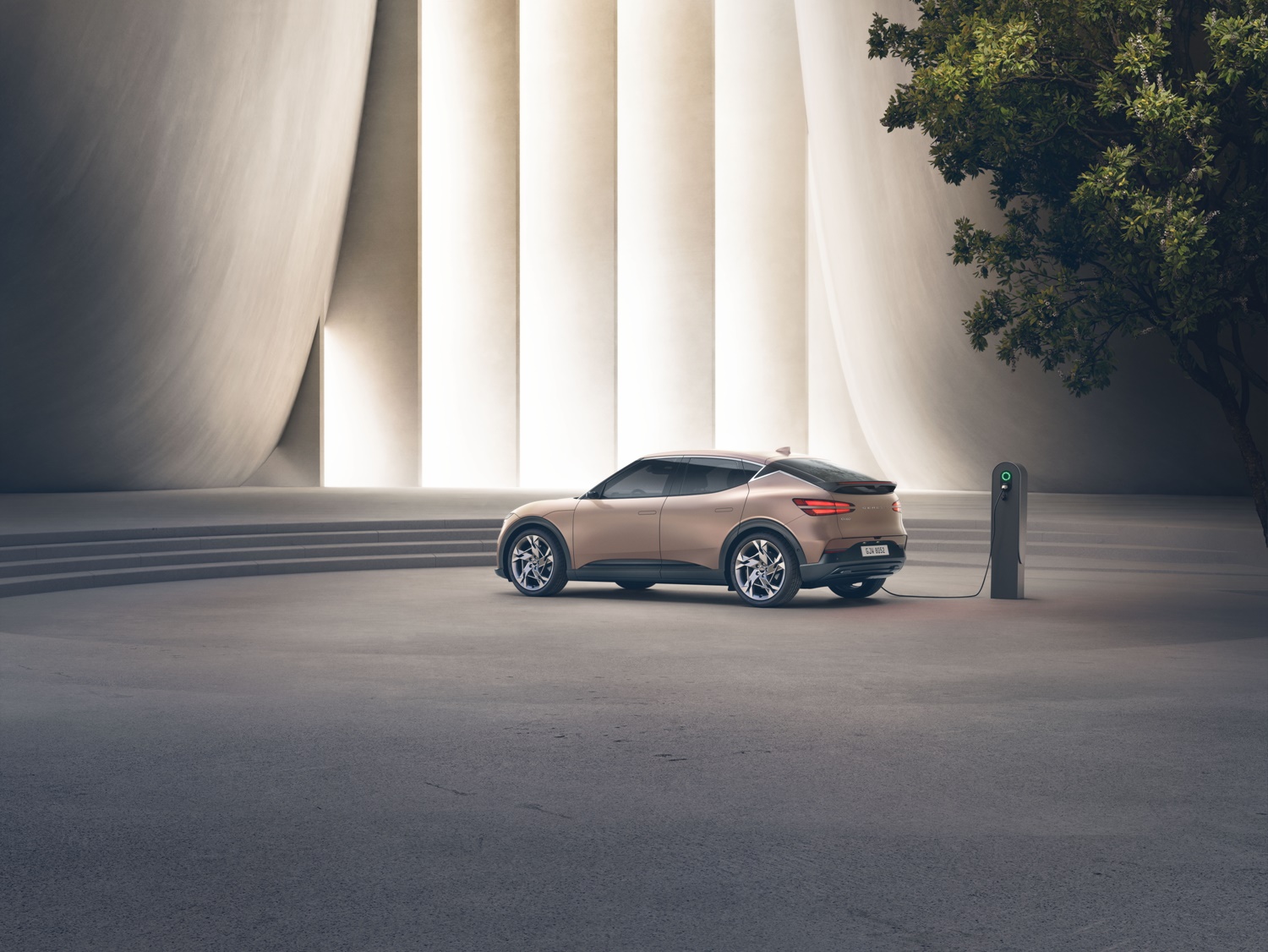 The same goes for those too-cool cameras which replace the car’s sideview mirrors; they’re unlikely to show up on our shores in the short term thanks to regulations on this side of the pond. It’s worth noting that while most of the GV60 examples shown during the presentation had these cameras, and one was equipped with traditional Dumbo-ear mirrors, strongly suggesting that feature is on tap for our market.

GV60’s interior is best described as minimal, though a creative ‘spinning orb’ gear selector rotates into view when the vehicle is ready to drive. A Genesis spokesperson described this as something of a safety feature, since placing the car into gear is impossible until the selector appears. There’s no denying its cool factor and the thing will surely be a great party piece for those showing off their new all-electric Genesis to interested neighbours.

In terms of styling, the GV60 steals some cues from its traditionally powered brothers, including its two-line design shape of its jumbo grille. Speaking to the latter styling feature, Genesis designers specifically said that while the maw is slightly smaller and a lot lower than the ones found on its gasoline-powered cars, it still serves as a functional cooling aid (presumably for the batteries). Also, expect Genesis to tweak its paint colour choices depending on the market; this suggests that some countries may not get the eye-popping lime green if the company feels it would not be popular.

Driving range is said to be in the 450 km bracket, a sum more than adequate for the vast majority of city dwellers and even most commuters. GV60 will be capable of hoovering up electricity from charging stations rated at 350 kW, though those can be difficult to find in our neck of the woods. This vehicle is built on the e-GMP architecture, of course, meaning it shares bones with the Hyundai Ioniq 5 and Kia EV6. Genesis was quick to point out the differences between this trio, stating their machine has unique driving characteristics and a style all its own.

Given the presence of a Boost button and Drift Mode, we cannot argue that point.

The company was tight-lipped when directly asked about pricing, though they did reveal the GV60 will show up in its home market of Korea this year and ‘overseas’ in 2022. This is good news, since industry scuttlebutt pegged the GV60 as being delayed far beyond those dates. Naturally, anything can and probably will happen in the automotive sphere between now and then (pandemics, chip shortages, and the scattered plague of locusts) but Genesis officials were confident of that timeframe.