Here are some thoughts on the weekend’s racing from the perspective of a Tuesday.

Everybody is making a big deal over Lewis Hamilton’s “hunting down” of Max Verstappen and defeating him at the almost-last minute of the Hungarian Grand Prix on Sunday. Because of what’s being called a “brilliant” pit stop call by Mercedes to give Hamilton new tires while Red Bull left poor Max out there on tires they knew wouldn’t make it to the end, Hamilton won his 81st career GP.

And I say give me a break.

Max was a sitting duck and it just happened that Hamilton was the guy in position to capitalize. It could have been any one of the other 19 drivers out there who would have caught him (okay, maybe not Robert Kubica).

This marks the second consecutive race where a “great call” was the talk of the paddock. Last week, Lance Stroll was the beneficiary and nearly got a podium out of it. This week it was Hamilton.

There was something else at play here, too: the slow thinking on the part of Red Bull. My wife, who is not a racing fan but humours me on occasion by sitting and watching a Grand Prix, asked me why Red Bull hadn’t called Max in for tires when Lewis stopped for his. I suggested it was because they figured they had a big enough lead that Lewis wouldn’t be able to catch him. “Yes,” she said, “but Hamilton has brand new tires and at some point they will still be good and Max’s won’t be. So why not stop now and then Max’ll have tires that will be fresher and last longer than Lewis’s?

It was around this time that the TV reporters were starting to wonder some of the same things. So Red Bull’s braintrust was as much at fault for the Mercedes victory as was Mercedes’ brilliance. Usually it’s Ferrari that screws up.  It’s nice to see that other top teams in F1 can also be brain dead.

We can now turn our attention to F1’s summer vacation and the top-of-mind story that will dominate the F1 word for the next couple of weeks: who will be Mercedes’ drivers going forward?

First, poor Valtteri Bottas has really been up against it. There’s enough pressure on an F1 driver at the best of times without being put under a microscope but Mercedes boss Toto Wolff chose to add to that pressure by suggesting a few weeks ago – in so many words – that Valtteri had two races to determine his future and that the team would decide over the holidays which direction it would take.

Mercedes is not the only one having to make a decision. There are some great drivers in F1 but others have overstayed their welcome. And there are plenty of drivers in the lesser European categories and the top North American series who could quite likely do a better job.

So, here’s a crystal ball look at some of the teams and the drivers expected to climb aboard for 2020 or exit quietly.

Mercedes will stay with Hamilton as No. 1, of course, and I suggest they will also stay with Bottas. He and Hamilton work well together and Mercedes is four miles ahead in the Constructor’s Trophy race and Wolff always maintains that it, not the driver’s championship, is the team’s primary focus. Hamilton is in the twilight of his career. He has been a great champion. He does not need the aggravation at this stage in his life or career of having to fend off a younger rival.

Esteban Ocon, the Mercedes reserve driver who is managed by Wolff (who has taken over from Flavio Briatore and Martin Brundle as the F1 personality with the most Conflicts of Interest) will replace Robert Kubica at Williams which, of course, is a Mercedes-powered team.

Sergio Perez, who rescued Force India by forcing it into bankruptcy, which allowed Lawrence Stroll to take over, will be unable to agree terms with the Canadian owner so will take over from Romain Grosjean at Haas F1.

The big question is Ferrari. Leclerc is a lock to stay on, of course, but what will Vettel do? Will he take a year off? Go back to Red Bull? Retire?

I suggest he will return to Red Bull to become Verstappen’s teammate, sending Pierre Gasly packing and leaving a hole at Ferrari.

Until Ferrari can find a new No. 2 to ride shotgun for Leclerc, they will sign Fernando Alonso to a one-year contract. And Gasly will replace Nico Hulkenberg at Renault.

It’s so much fun to speculate, isn’t it?

You can bet, then, that when Wolff and his executive committee sit down to discuss the future of the Mercedes driver lineup, Hamilton’s name will also be part of the conversation. If the champion falters, a winning team has got to have a replacement at hand.

And we haven’t even got to Colton Herta.

For anyone still looking for a nuts ‘n bolts story on Sunday’s race, please click here.

Sad News: Jason (Jay) Morse, who ran St. Thomas Raceway Park for the past half-dozen years, has died. The legendary drag-racing facility is owned by Paul and Andy Spriet (they just held one of the most successful meets in Canadian drag racing history at their Grand Bend Motorplex, the 20th anniversary Mopar Nationals) but was leased to Morse, a well-respected member of the drag racing community. He was famous for promoting the annual Turkey Trot Nationals every Canadian Thanksgiving as well as another famous meet at the facility, the East London Timing Association’s annual nostalgia gathering which is scheduled, incidentally, for next weekend. R.I.P., Jay.

More sad news: When I was on the Globe and Mail in the 1960s, I was sent one Saturday night to Pinecrest Speedway to cover the stock car races. I was talking to a car owner when one of his crew members grabbed me and threw me to the ground. A split second later, a tire bounced past where I’d been standing. That night, I learned that spectators also have to keep their eye on the ball at the car races.

I mention this because of a tragedy that took place at the famous Williams Grove Speedway in Mechanicsburg, Pa., last Friday night. Richard Speck, a push-truck driver at the speedway, was sitting on the back of his pickup when a sprint car catapulted over the fence and killed him. Mr. Speck, 67, was a retired math teacher who was involved in many sports, coaching minor baseball and football and helping out at the speedway. Sprint cars have to be pushed to start and after the field is rolling, several are parked near an opening in the catch fencing in case of an accident where a car or cars have to be restarted. Mr. Speck’s truck was one of those lined up in case of emergency. Racing was cancelled after the accident.

Kingston News: I lived and worked in that eastern Ontario community for many years and have a soft spot for racers out that way. Dan Corcoran, of the famous Corcoran racing clan – brother Tony and father Len (who also owned and drove harness-racing horses) – ran the NASCAR Xfinity Series race at Watkins Glen last Saturday. He started 34th and finished 25th. Word is that he’ll be in a truck when the NASCAR trucks are at Canadian Tire Motorsport Park later this month. I’ll check that out. Dan, incidentally, lives in Elginburg, which is just a little north of Kingston. The family business, Len Corcoran Excavating Ltd., is also located there.

Speaking about the NASCAR trucks, Alex Tagliani announced at the weekend that he will be racing again in the Chevrolet Silverado 250. So that’s two Canadians – if the Corcoran word turns out to be true – and counting.

Canadian IndyCar racing star James Hinchcliffe and Rebecca Dalton, both of Oakville, Ont., were married at the weekend in a ceremony in Muskoka. Best wishes to the happy couple. And James, if you ever need any marital advice, don’t hesitate to call. I’ve had lots of experience.

The legendary John Force won his 150th Funny Car NHRA championship race medet Sunday in Kent., Wash., by capturing the 2019 Northwest Nationals. Here is a closer look at how he got to 150 as well as some other significant numbers. (Note: he won his first one up here in Canada.) 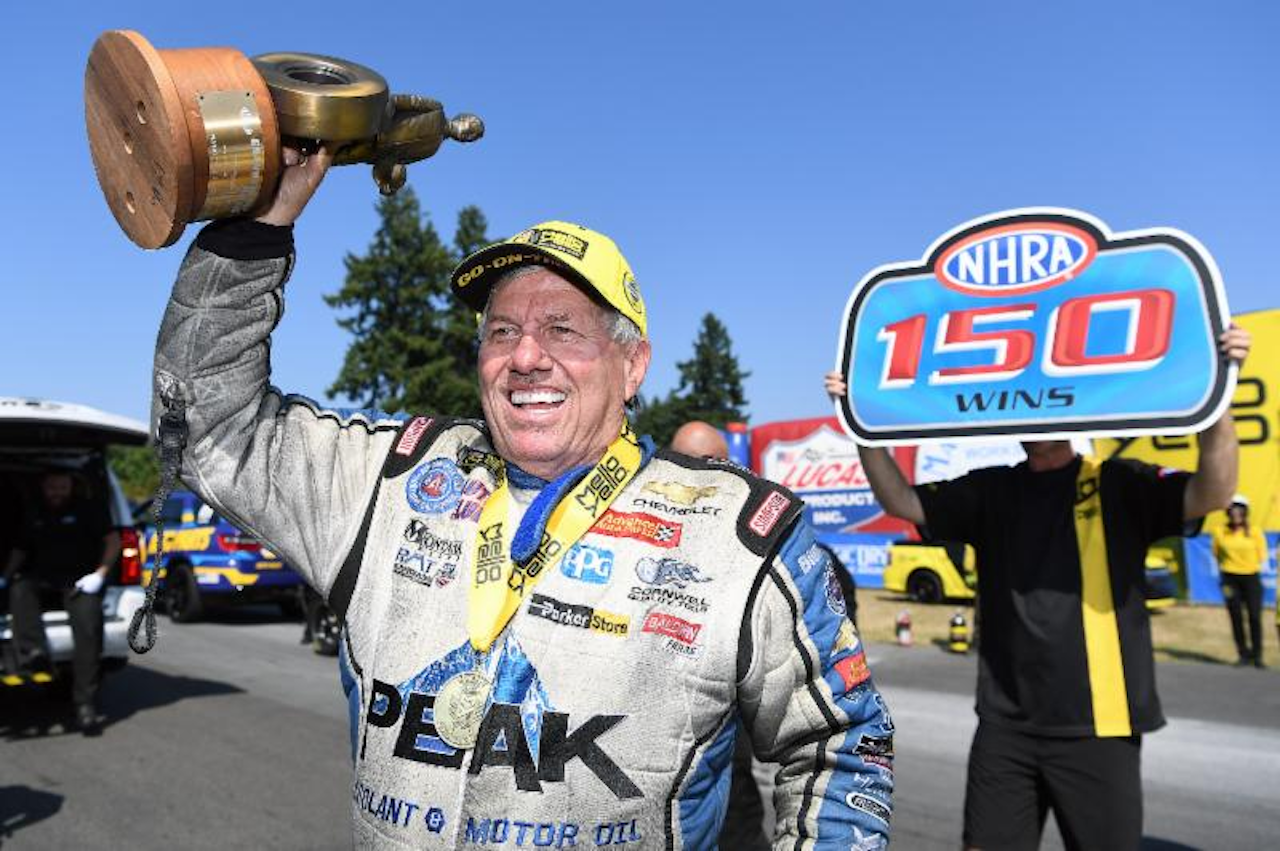 It was an instant replay of a year ago at Watkins Glen Sunday. Chase Elliott beat Martin Truex Jr. for the Monster Energy NASCAR Cup win. Want to watch a video recap? Click here.

That Xfinity race I told you about above was won by Austin Cindric, the son of Tim Cindric, president of Penske Racing. A.J. Allmendinger was second but was disqualified when the car failed post-race inspection. The same thing happened to A.J. at Daytona. In that race Saturday, I saw something that made me really angry. Regardless of his reputation in NASCAR circles, Justin Allgaier is a jerk. Early in the race, Ross Chastain and Allgaier went into the bus stop side-by-side. There is barely room for one car at speed through there, so two into one won’t go. They bumped and Allgaier slid in front of Chastain who stayed on the throttle and moved our Justin out of the way. That was a bummer, I thought. Two guys racing hard and one loses out. It happens. But Allgaier then waits for Chastain and knocks him into the fence, causing considerable damage to Chastain’s car and ending his day. There’s a reason why guys like Allgaier are stuck in the minors and that’s one of them. He apologized later and said he hadn’t meant to wreck the other guy’s car (ho, ho, ho) but the damage was done. “I wanted to get a point across,” said Justin. The problem is, there wasn’t a point to get across.

Lynn St. James, one of the great women racing drivers of the past 50 years, was discharged from Methodist Hospital in Indianapolis Monday morning after being injured in a vintage car race at Indianapolis Motor Speedway at the weekend.

Mark Marquez became only the fourth rider in motorcycle racing history to win four Moto GP Grand Prix championships when he finished first in a race in the Czech Republic on Sunday.

This from ace PR man Clayton Johns: Ohsweken Speedway resumed action following a one week break and kicked off the month of August with Insta-Panels Memorial Night on Friday, August 2. A total of 126 race cars signed into the pit area in four divisions for the night that featured the Brock Leonard and Art Hill Memorial races for the Insta-Panels Duel on the Dirt Thunder Stocks and Mini Stocks, respectively. The races were run in honour of Brock Leonard, a former Ohsweken track official who passed away eight years ago and in memory of Art Hill, the only driver to have lost his life in competition at Ohsweken.

When the final checkered flag of the night had waved, it was Brighton Speedway regular Justin Ramsay who claimed his first career Ohsweken win in the 50-lap Brock Leonard Memorial for the Thunder Stocks in the Insta-Panels Duel on the Dirt Series. Tyler Lafantasie led the entire second half of the 42-lap Art Hill Memorial to score a Duel on the Dirt Mini Stock Series victory. Nick Sheridan picked up his second win of the season with the Strickland’s Brantford Chevrolet Crate Sprint Cars and Brad Rouse scored a win with the Race of Champions Sportsman. 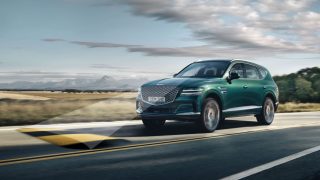 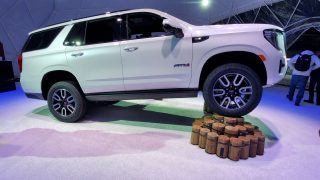