On this day, everyone was a weekend millionaire. With no admission fee, visitors, for the sixth successive year, were being asked to donate a Loonie or two into donation barrels located along the closed off street, with all proceeds going towards helping to fund Prostate Cancer Canada and their research.

TORONTO, Ontario – While temperatures were inexorably climbing higher as the blazing sun rose in the blue skies over a concrete, steel and glass forest of prime, branded real estate along the fashionable “Mink Mile” on Toronto’s Bloor Street, closed to vehicular traffic between Bay and Avenue Road, disciples of supercars and all manner of exotic vehicles descended on the area with one common purpose: to view some very expensive, in some cases exclusive, automobiles that more than 95% would likely never have an opportunity to either drive, let alone possess the pink slip.

But it did not matter.

On this day, everyone was a weekend millionaire. With no admission fee, visitors, for the sixth successive year, were being asked to donate a Loonie or two into donation barrels located along the closed off street, with all proceeds going towards helping to fund Prostate Cancer Canada and their research.

On this day, everyone was a weekend millionaire.”

Phil Downe is the Chairman and Founder of this particular show and along with an executive team of car aficionados and many volunteers have worked tirelessly since 2010 in bringing this popular event to the city thanks to the corporate sponsorship of Bloor-Yorkville Business Improvement Area, Acura and the generosity of numerous organizations who have given of their resources and personnel to ensure this year’s event is the best ever. 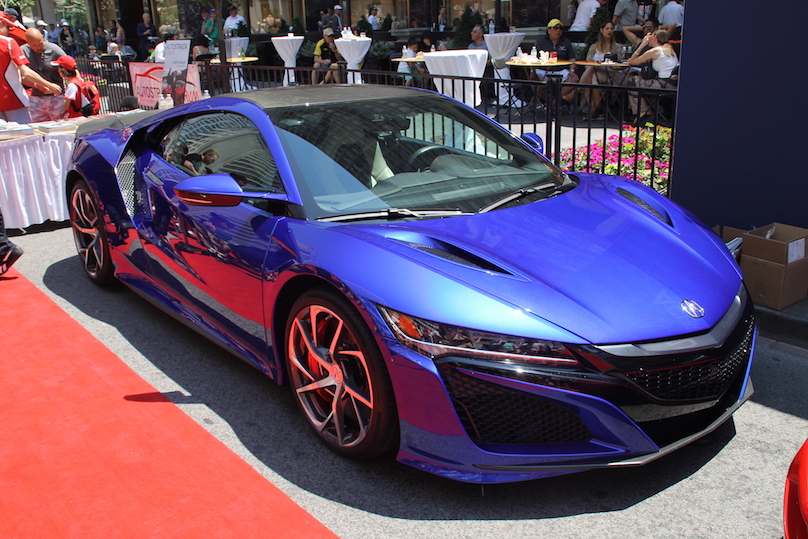 With well over 120 gleaming examples of European and a few Asian automobiles on display in 11 unique, velvet-roped “corrals”, enthusiasts had an opportunity to view and lust after first-hand the debut of “LaFerrari”, the newest sports supercar from luxury Italian manufacturer Ferrari, valued at over 2 million dollars. North America was well-represented with classic, vintage and current Corvette Stingrays as well as Mustangs and Shelbys also held court.

Car enthusiasts from all over, of all ages and disparate demographics, became one seething organic mass of humanity, held together by sweat, cotton and linen emblazoned with logos of the 1%. Other highlights included the 2017 Acura NSX, a Lamborghini Aventador, an Aston Martin Vanquish, an iconic 1965 Shelby Cobra, a Porsche 911 GT3 RS and the new 2016 Mustang Shelby 350GT. 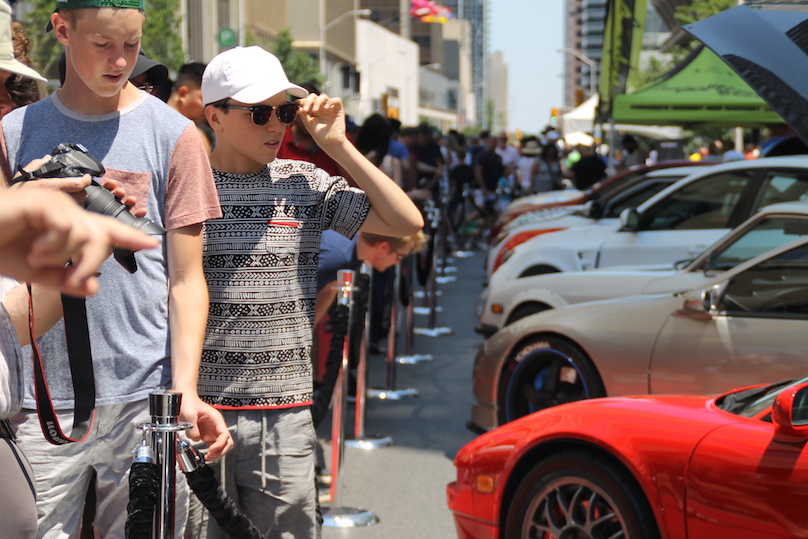 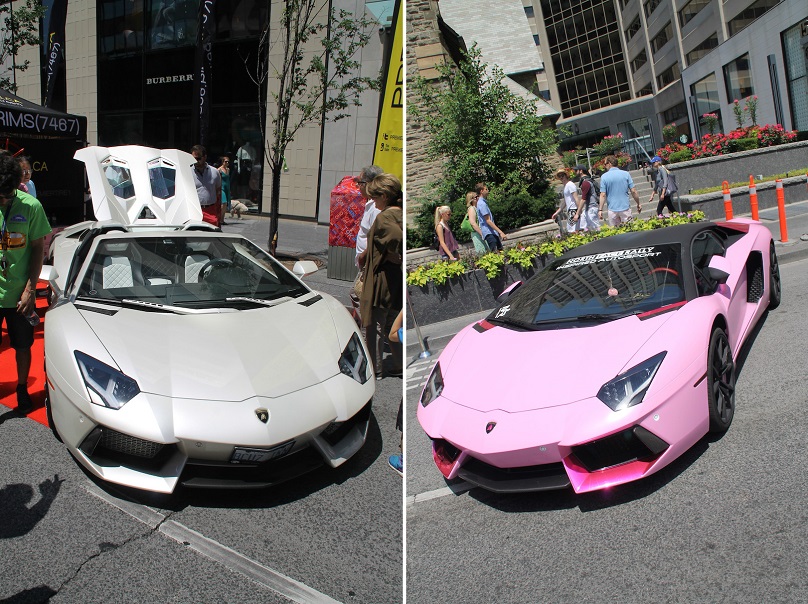 Car enthusiasts from all over, of all ages and disparate demographics, became one seething organic mass of humanity”

Not all cars were the latest and greatest. Some, not too many, could be deemed classics, Heritage vehicles. Something for everyone. No matter how diverse.

It seemed by way of observation that there was a split in loyalty over these multiple displays of expensive performance models. There were absolutely favourite corrals – depending on whether you leaned toward Corvettes, Porsches, Ferraris, Lamborghinis or Aston Martins. Even an all-black Godzilla (Nissan GT-R) was on display, drawing appreciative nods and knowing looks from young video game fans. 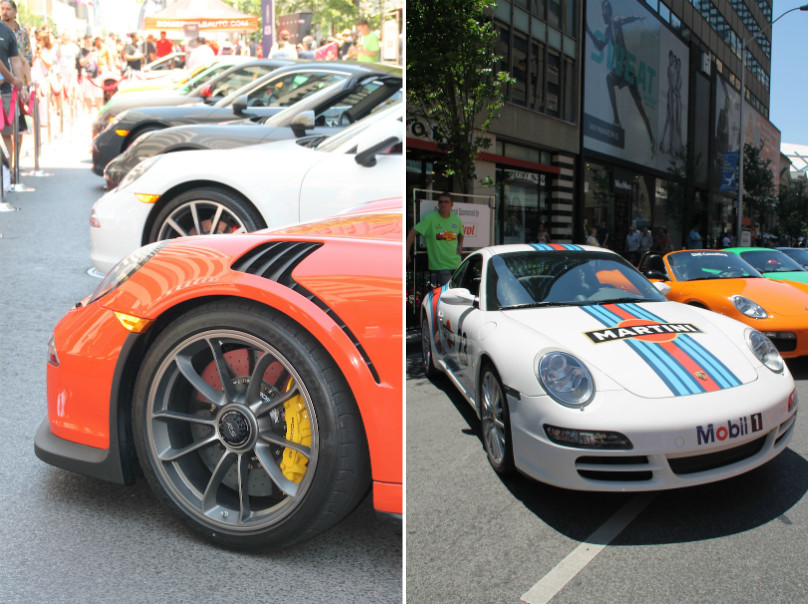 This crowd of enthusiasts was as diverse and different as those who might attend a more traditional, classic car show. While there was a distinct feeling of affluence from the crowd thanks to skinny jeans, impossible heels, immaculate make up, jewelry, manicures and, perfectly coiffed hair there was an equal amount of enthusiasts – individuals who appreciate when design and engineering meet with impossible cars but dressed in 501s and vintage t-shirts. But appearances do not diminish from the enthusiasm and knowledge of many in the crowd.

Young males with impossibly clipped and sculpted designer stubble would lean into their female companion and whisper about the vehicle laid before them. Every nuance. Every statistic. Every piece of information was known – and was to be shared.

Not to be outdone, there were also women in attendance who were there because they loved fast, powerful, shapely vehicles – many identified with the European brands and could recite from rote tidbits of information engineers had long forgotten.

In spite of the heat, the mood was upbeat. Some fans found the heat a little much and were taken to a shaded area in the doorway of a marqued store they might never under normal circumstances enter, but relief in the shade was the coin of this realm, on this day. Coupons were being distributed for free sno-cones, bottled water sales had likely never done so well.

At this show for the vast majority of the vehicles, fans were not able to get up close and too personal with their favourite autos. Parked in the aforementioned corrals, fans had a velvet barrier before and between them so the often much-loved tactile approach of other car shows was not there – given the collective value of the vehicles on display, the natural heat-infused enthusiasm of the punters, it’s not really that surprising. Nothing seemed to dim the enthusiasm of visitors who would often take multiple selfies, in full duck-face pout in front of some hot, exotic vehicle to be shared via Snapchat to adoring fans the city over. 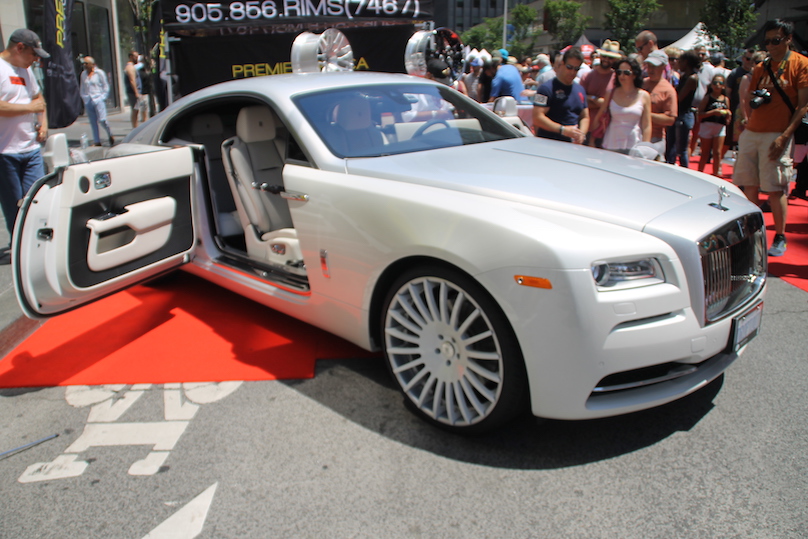 Not having experienced this particular show personally before, early on in the proceedings I was impressed with the systematic fashion the ever-increasing throng maneuvered the exhibits, in an orderly, follow-the-oval route. As the afternoon progressed, however, all bets were off and the crowd seemed to move like a murder of starlings, as a large group with no real direction or purpose – other than to test the resilience of the “rope” and paid security. 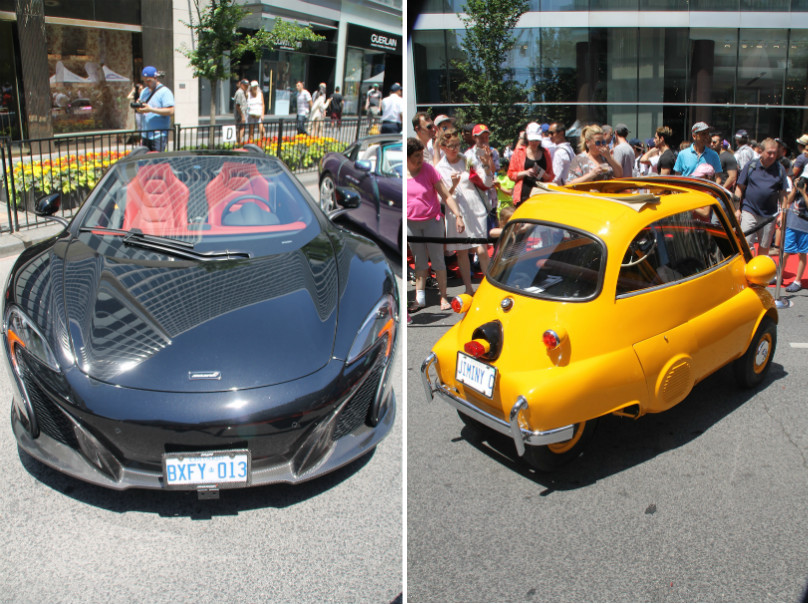 The day, and the occasion won, however and humour and attitude remained positive.

One young child, apparently all of three years old was overheard telling his Mother that “this” car, a Lamborghini a stubby finger pointed at it, was his personal favourite. Three years old. He even named the supercar. His Mother asked how he knew this. Had he seen a photograph, a poster perhaps, had he overheard a snippet of a conversation from a fan? No. Seems he was familiar with the shape. His father, it turned out, would share his passion for automobiles and read him to sleep from car magazines that he subscribed, pointing out glossy photographs until the familiar head-nod of fatigue won over and junior would fall asleep.

Dad, meantime would remain on the bed, with his son, day dreaming about an opportunity to take one of his beloved Italian supercars for a drive.

That would be the perfect Father’s Day gift. One day, his son might just surprise him.