Join the Conversation (0)
We’ve all heard, or read about, people who restore old cars as a hobby. In fact, we used to publish a popular feature here in Wheels called Eye Candy, in which people who’d either purchased an already-restored car or taken a few years to polish up a clunker got to show them off in the paper.

The ones who bought their restored automobiles might have received accolades, but they missed out on a lot: the challenge, the frustration, the expense and the time required to take on a restoration project. Most important, they also missed out on the fun of acquiring something that had seen better days and that they’d brought back to life and made sparkle.

The ones who opted to do the restorations themselves often admit to working in their spare time for five or 10 years to do a car. I want to introduce you today to a neighbour of mine in Mississauga who’s taken — wait for it — 35 years to return a 1968 Plymouth Barracuda fastback to its former, brand-new glory.

That’s three and a half decades.

His name is Todd Murray, he's 53 and the car he’s nuts about, and has devoted so much of his life to, is a two-door passenger car that was based initially on the 1959 Plymouth Valiant compact car but had evolved to boast Barracuda-specific sheet-metal styling and have its own range of models, including convertibles.

Murray bought his baby the year he turned 18 — 1985 — and finally finished it, literally, the other day. It’s licensed and insured and rarin’ to go. He planned to spend the summer this year going on cruises and to car shows in towns all over Ontario, but the coronavirus crisis has more or less put a damper on that.

But taking 35 years to do what he’s done shows he’s a man of patience, so the cruises and car shows can wait. A pretty laid-back guy, he’s OK with that.

Murray is single, has a 10-year-old daughter and works as a heating, air-conditioning and ventilation mechanic. He lives up the street from me in a two-storey, three-bedroom house with a one-car garage where he’s done much of the work on this car.

Read that again. He’s done much of the work on that car in a one-car garage. The ’Cuda is about six feet wide and the garage is nine feet, giving him about 18 inches on either side of his pride and joy to do much of the restoration work. 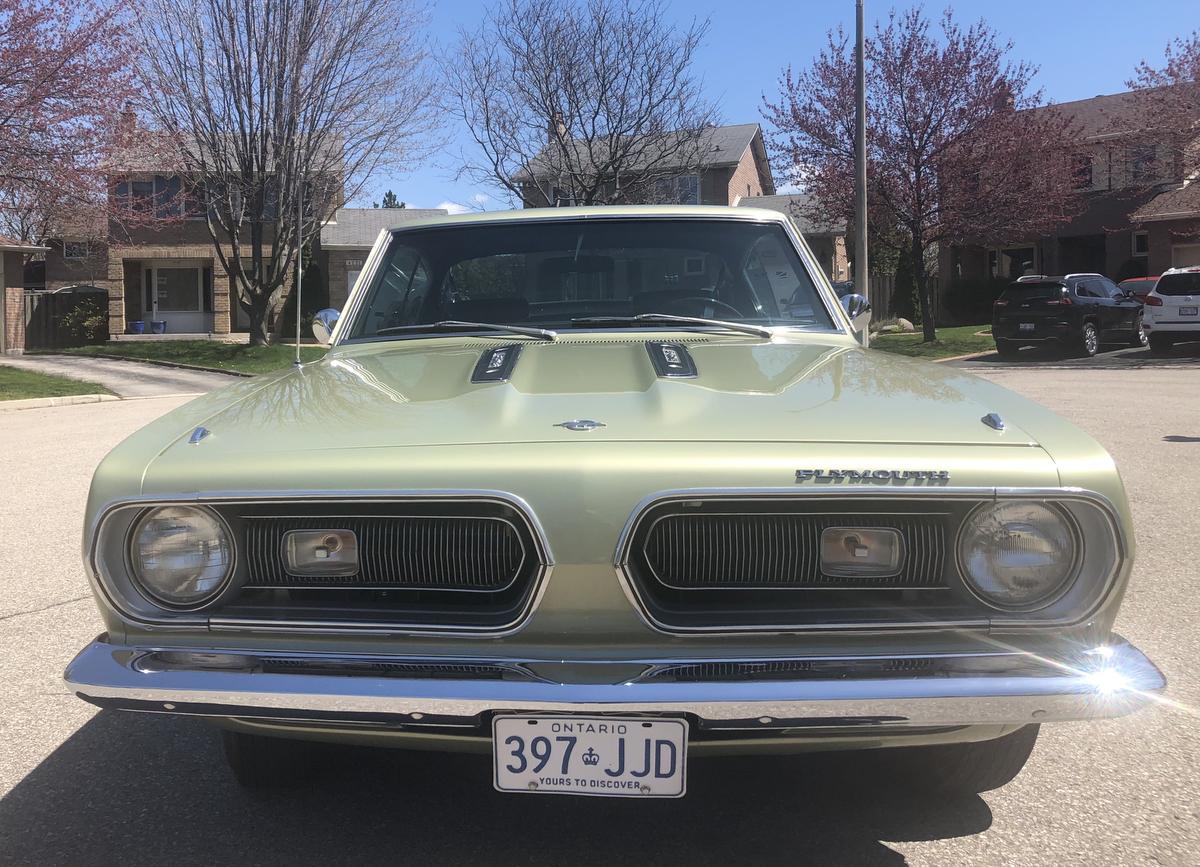 (Actually, it just hit me that maybe the reason it took him 35 years to do this is because he didn’t have a lot of room to manoeuvre inside that garage.)

Murray and two pals from his Oakville high school days, Paul Bouchard and Blake Dryden, are crazy about Barracudas and have all worked on each other’s cars at one time or another.

“In our spare time, we’ve gone to car shows over the years,” Murray said. “Pretty much every night of the week, there’s a car show you can go to. It’s a good night out.”

He said he doesn’t belong to a car club: “The three of us are kind of our own little club.”

Bouchard, who was visiting his friend the day I’d wandered over, owns a 1970 ’Cuda that’s blue, but if painted canary yellow would have fit right into the 1996-2001 TV series “Nash Bridges.”

“I remember the first episode I saw of that show,” Bouchard joked. “A woman committed suicide by jumping out of a highrise window and she landed right on the hood of the ’Cuda. I said, ‘Oh, no!’”

Murray said he inherited his love for cars from his father, the late Keith Murray. “My father was always a Mopar guy, and he had a bunch of old cars as I was growing up and he kind of piqued my interest,” he said. “I would always help him out, fixing his cars. He would do most of the timing and oil changes and everything right in our driveway, so I kinda got into it through him.”

Todd Murray said he actually owned two 1968 Barracudas before buying the one that’s in his garage now, but neither of the early cars was a keeper.

“I took parts off them to use on this one,” he said. “I stripped (the cars) down and saved all the parts and then Paul and Blake helped me when I started this project, which has really been an ongoing hobby. 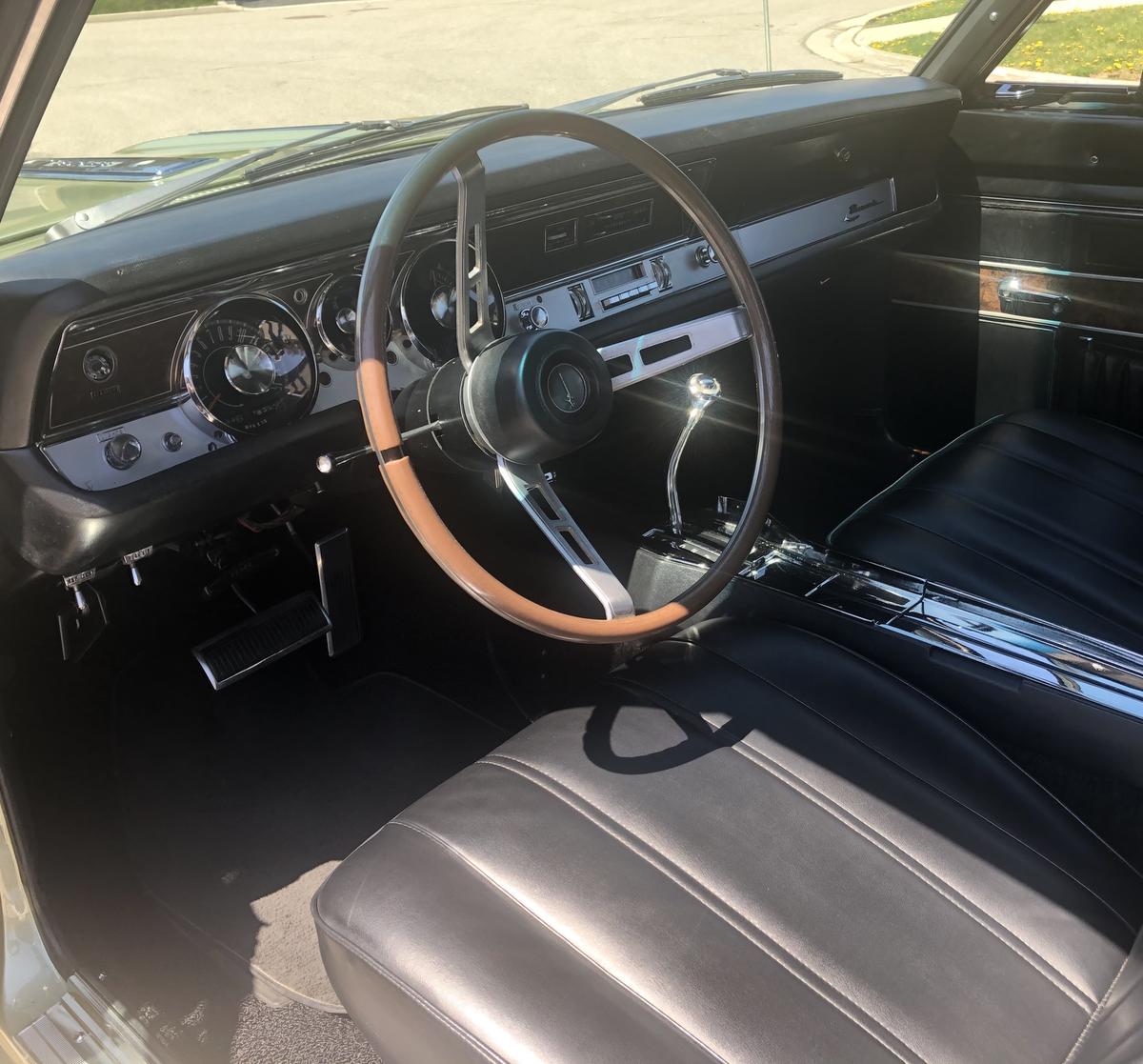 “I bought this car in the spring when I was 18, and I’ve been working on it ever since. When we started, I was so meticulous that in order to do it right, the guys and I decided on what’s called a rotisserie restoration.”

(Which is when the car is totally disassembled. The frame is then placed on a car rotisserie so it can be turned and every nook and cranny on the car can be examined.)

“The whole car was stripped right down,” Murray said. “Every nut and bolt was taken out and either replaced or machined to be as good as new. We sandblasted the frame because the underside was in really bad shape. I had full quarter panels put on it.

“The fenders came from Portland, Ore. I have a friend who lives in Vancouver and he was into Barracudas, too, and he found me a set of fenders out there that were in, like, mint condition, original paint, so he bought them and shipped them to me. I went over to the train station and picked them up.”

Parts, as well as coming from his two previous ’Cudas and Oregon, were sourced at a huge midsummer car show held each year in Carlisle, Pa.

“That car show can take you three full days to go through,” he said. “We usually left Wednesday night or Thursday morning and the car show would start Friday morning and go to Sunday night, so we would camp out at the show. We would rough it — we slept in tents — but we had a lot of fun. We had to do a lot of searching for what we needed and then we’d bargain, which was always fun. We found tons of stuff for my car as well as Paul’s and Blake’s cars.”

He also bought a road sign, “Barracuda Blvd.,” that hangs in his garage. But back to the restoration.

“I did most of the mechanical work,” he said. “All of the chrome, which is brand new, and the reassembling was done in the garage, but I had a guy who did all the metal work for me — Paul’s car, too — and his name is Keith Sims, who’s probably one of the best metal guys around.

This is where working in the small garage got tricky. 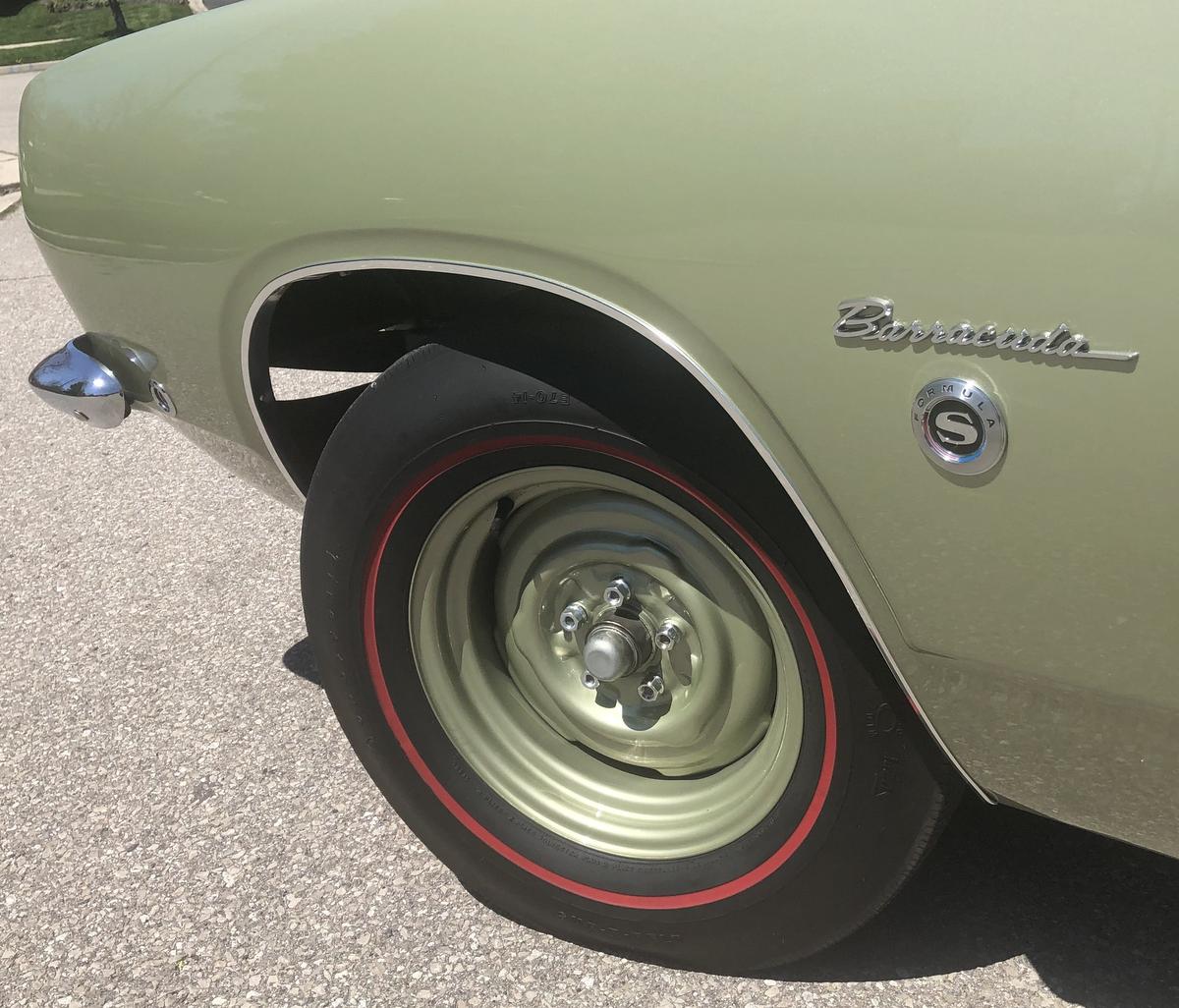 “There’s not a lot of room to move around in there,” he said. “It was a very tight fit, especially when I was trying not to scratch a new paint job. That’s why I wear track pants when I’m working around the car. No metal, like on jeans. Putting all the chrome back on it was definitely time-consuming. It’s been a labour of love, that’s for sure.”

I told him that I’d seen him zipping around a corner in our neighbourhood a few weeks ago and was wondering whether he was just out taking a quick spin and hoping not to run into the police. Turns out, as mentioned, the car is finished, licensed and insured, and this was to be the first summer he would drive it.

“There are still a couple of bugs to get out of it,” he said. “Steering-wise, it pulls a little to the right, so I have a guy that’s going to align the whole front end. All the parts up front are brand new, including the hub caps, which I will put on after the alignment, so it’s just a matter of setting it up properly. Other than that, it drives and rides real good.”

Murray said he’s restored the car to 1968 “factory spec,” so that means the seatbelts are just that: lap belts. There is no three-point harness in it like there is in 2020-model vehicles.

Murray doesn’t think that, after 35 years of tender, loving care, he would ever sell his ’Cuda. But would he restore another one?

“It would be pretty tough to do, money-wise,” he said. “I have between $65,000 and $70,000 invested in this one and that doesn’t count all of my labour. It’s an expensive hobby. Parts are expensive nowadays, too. You can probably buy just about anything for this car, unlike the scrounging around I had to do, but you would have to pay top price.

“Having said that, I think I’d like to buy one for my daughter Alyssa. I could fix it up for her; I have a lot of spare parts. I’m actually going to pick her up later today and take her for her first ride in it. She’s watched me work on it, so it will be a thrill for both of us.”

OK, the question I really wanted to ask was how fast this car could go. Murray sensed this and answered before I could ask it.

“This car has a 340-cubic-inch (5.6 L) small-block V-8 in it,” he said. “It has a four-barrel carburetor and it’s pretty quick. Lots of get up and go. Depending on the gear ratio you would run in the back, this one, factory, probably would do the quarter in around 14 seconds, That’s pretty good for a stock 340 car.

“When I first bought this car, it was painted white, and I took it to Cayuga (now Toronto Motorsports Park) a few times. I ran it down the strip. We went to the drag races there when we were younger. We had a lot of fun.”

Before I go, one other thing about this guy. Everything about this car is immaculate — just like his lawn and his flower beds. “Yes,” he said, “I really enjoy gardening. Maybe not as much as I do working on my car, but it’s close.”

Norris McDonald is a former Toronto Star editor who continues to write for Wheels under contract. He reviews weekend auto racing every Monday at wheels.ca.