Spectre is the first EV in a line-up that will be fully electric by 2030, Rolls-Royce says.

Join the Conversation (0)
Just over a year after announcing it and following 2.5 million kilometres of testing, Rolls-Royce has taken the cover off the first EV to roll out of its Goodwood, U.K. facility, the Rolls-Royce Spectre.

Labelled the “spiritual successor” to the Rolls-Royce Phantom Coupé, the brand says Spectre establishes an entirely new vehicle class, the ultra-luxury electric super coupé—super due to the car’s ample proportions, which give a footprint nearly five and a half metres long and just over two metres wide for its two-by-two layout (5,453 mm and 2,080 mm respectively with a 3,210 mm wheelbase, to be precise).

Rolls-Royce states as part of Spectre’s release that electrification suits the brand’s ethos well enough to convert its entire line-up to fully electric vehicles by 2030, citing near-silent operation and instant torque availability as the reasons behind the decision. (In other words, the days of the hand-built V12 are numbered.)

As for the Spectre’s key specifications, Rolls-Royce is projecting the car will have a range of 260 miles (418 kilometres on a straight conversion), based on U.S. EPA testing procedures. Canadian testing protocol accounts for our less hospitable climate since extreme heat and cold directly impact a vehicle’s range, so expect official figures for our market to be lower.

Total power output is still subject to change as Spectre goes through its final development phases, but current estimates place it at 577 horsepower and 664 pound-feet of torque. Those are stout figures, but they’ll need to be to haul around the car’s 2,975 kilograms (6,559 pounds) of curb weight. Still, the Spectre gets from 0 to 100 kilometres per hour in 4.5 seconds, which is on par with the internal combustion engine-driven Rolls-Royce Black Badge Ghost.

Based on a fully aluminum architecture shared with other vehicles in the Rolls-Royce line-up, the Spectre’s construction and battery integration makes it 30 percent stiffer than anything the brand has ever produced. To keep the ride quality up to expectations, the suspension’s anti-roll bars are able to decouple to allow the wheels to roll independently over imperfections in the road surface, then reconnect for optimal cornering performance. With its 23-inch wheels, Rolls-Royce says Spectre is the first two-door production car fitted with wheels this size in nearly a century.

The front end is defined by split headlights that flank the widest grille ever featured on a Rolls-Royce—which is ironic given that since there’s no engine to cool, a large grille is no longer a requirement. Given that it’s illuminated with 22 LEDs and has been streamlined for improved aerodynamics, the grille is clearly retained here first and foremost as a design centrepiece. The car’s total coefficient of drag is estimated at 0.25, an important figure for electric range and an impressive one given that the car has retained much of the squared-off look Rolls-Royce is known for. 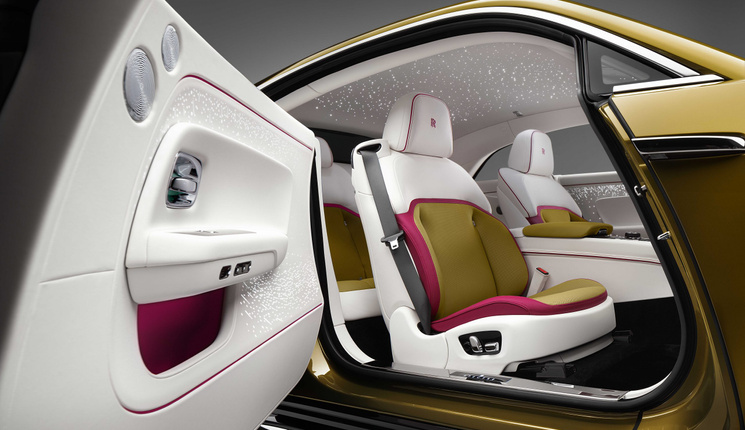 On the inside—which is accessed by coach-style doors that hinge at the rear, a Rolls-Royce signature design element—the starlight headliner treatment that has also become a Rolls-Royce signature is now extended onto the door inserts. A new seat design adds what the brand calls lapel sections that can be fitted with matching or contrasting colours, making it possible to incorporate even more colour into the cabin. That said, given that almost all Rolls-Royce vehicles that roll through Goodwood are built with some degree of bespoke design integration, colour combination, materials, and other personalizations are limited only by one’s imagination and budget.

Specific pricing for the Spectre has not yet been provided, but the brand says it will fall between that of the Rolls-Royce Cullinan, which starts at just over $400,000 in Canada, and the Rolls-Royce Phantom, which starts in the mid-$500,000s. Commissions for Spectre are now open, and the first deliveries to customers are expected to begin arriving at this time next year.