All-electric Sprinter van will be offered in North America for the first time.

Join the Conversation (2)
The ubiquitous Mercedes-Benz Sprinter van, darling of delivery companies and freight shippers around the globe, is going to earn an all-electric counterpart next year. Specifics about power and cargo capacities will be available in a couple of months but until then, Merc is only willing to talk about the van’s range – or at least a range test involving a late-stage prototype vehicle.

In order to simulate a real-world express delivery, two Mercedes eggheads drove round-trip from the company’s museum in Stuttgart to Munich airport and back, knocking off an impressive 475-kilometre drive without recharging the vehicle. The route was described to us by Mercedes engineers as “demanding yet typical of a delivery run”, involving motorway sprints and a climb up the Swabian Jura (there was a total elevation change of 575 metres).

The prototype was a high-roofed sliding door model, familiar to anyone who’s ever seen a Mercedes delivery van plying the streets of our country thanks to a markedly similar size and shape compared to the present-day internal combustion van. There was no aero trickery, we were promised, so get any thoughts of taped-up headlights or caulked-in door jambs completely out of your mind. Video of the feat viewed by this author showed Merc engineers pumping the test van’s tires to a wholly appropriate 3.2 bar (roughly within the 45 psi spec called for in a diesel-powered Sprinter). 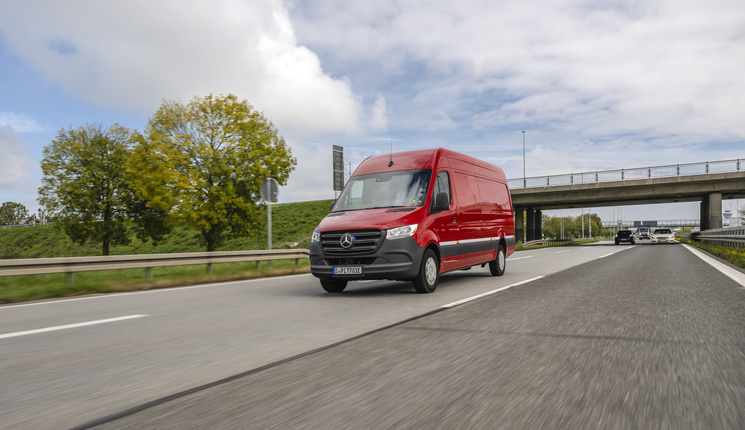 “Speed limits were observed,” we were told, putting to rest any suggestion that the crew created any sort of rolling roadblock on German motorways during the October drive in a bid to save electrons. In fact, a third party is said to have pegged the van’s electricity consumption at 21.9 kWh/100km for the test drive. The van had 47 percent remaining on its battery gauge when it arrived at Munich airport and 3 percent when it rolled into applause back home in Stuttgart, the latter said to be good for about 20 kilometres.

While the stern Germans at Mercedes aren’t yet talking about total battery capacity for the e Sprinter, some basic math reveals a few suggestions. A consumption of 21.9 kWh/100km over a 475 km drive suggests a battery capacity of at least 104 kWh, plus a little bit for some reserve safety and the three percent which was remaining in the battery upon the drive’s end. This size battery bodes well for the upcoming eSprinter to be able to pack enough range for many commercial customers – not all, of course, but most. 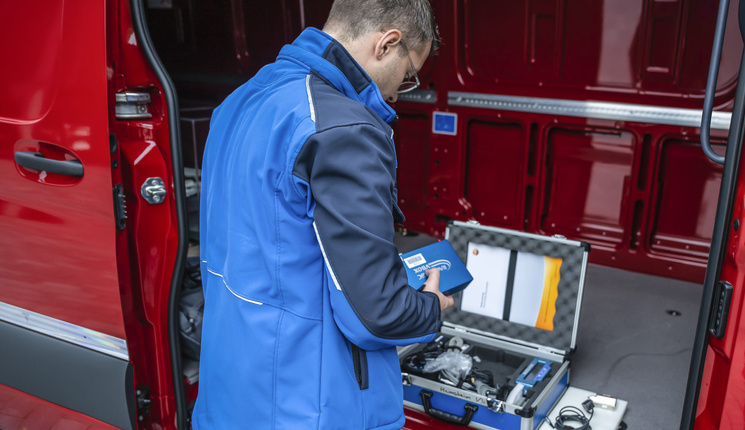 Since the testing cycle for rating an EV’s total range is notoriously tough in North America, official numbers may be more pessimistic than this 475 km feat. Nevertheless, the designers of this van seem to have proven the outer edges of what this all-electric delivery van may be capable of doing.

Interestingly, it appears that Merc is already hard at work on another take on electric vans, stating that, from the middle of the decade, the Vans division of Mercedes-Benz will implement the next stage of its electrification strategy using a platform called VAN.EA (Mercedes-Benz Vans Electric Architecture). From 2025, all mid-sized and large vans based on the new modular architecture will be purely electric. Your author finds it perpetually fascinating that car companies peer extremely far into the future; in this case, making mention of the next van to appear after the one that hasn’t even been released yet. And the cycle continues.

Mercedes plans to launch the new e Sprinter in North America next year, and Wheels will bring you first-hand coverage. While an eSprinter variant has been available in Europe for some spell, this is the first time it is being offered on this side of the pond – and will actually reach our shores before popping up in the Motherland. The new eSprinter will be produced successively in Charleston (South Carolina, USA), Düsseldorf, and Ludwigsfelde from the second half of 2023.