Join the Conversation (0)
If anyone tries to tell you that true old-school beat-‘em-over-the-head competition is dead and gone, feel free to point them towards Detroit-based manufacturers of full-sized trucks. Hot on the heels of Ford and Chevrolet throwing the covers off their own updated workhorses, GMC joins the fray with a thoroughly reworked Sierra HD. 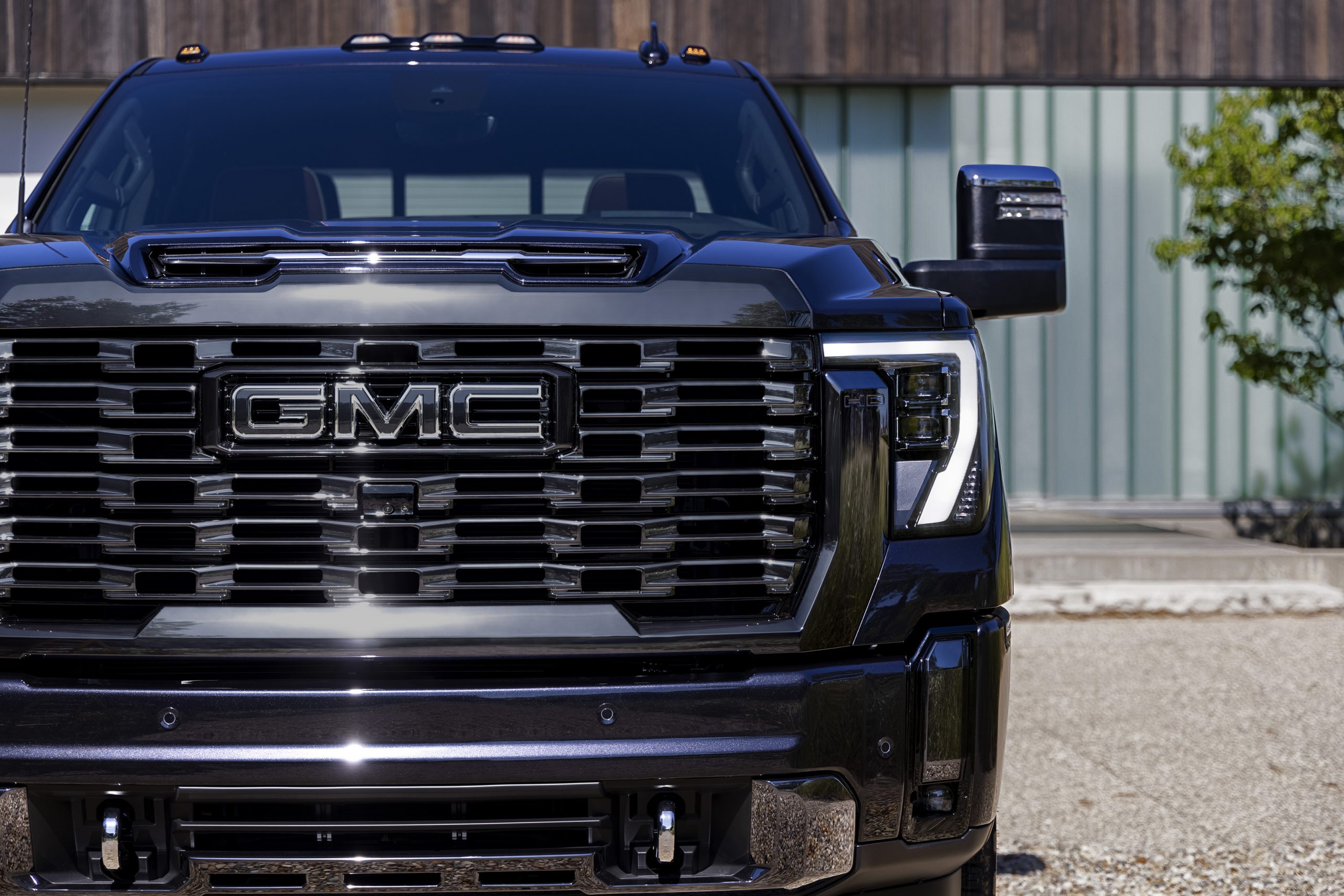 Starting with the exterior, the brand has tweaked this truck’s styling with an updated front fascia and a raft of new grille designs. While it is still every inch a GMC, and sufficiently different in appearance from its Chevy brother, the new lamps (now with animated lighting) and other tweaks ensure yer buddies on the jobsite will know you’re rocking a ’24. Each trim gets a different take on the same theme, ensuring the off-road AT4 looks sufficiently different from the high-zoot Denali Ultimate. A smattering of new paint colours and wheel options complete the exterior updates. However, as your parents taught you – it is what’s inside that counts. 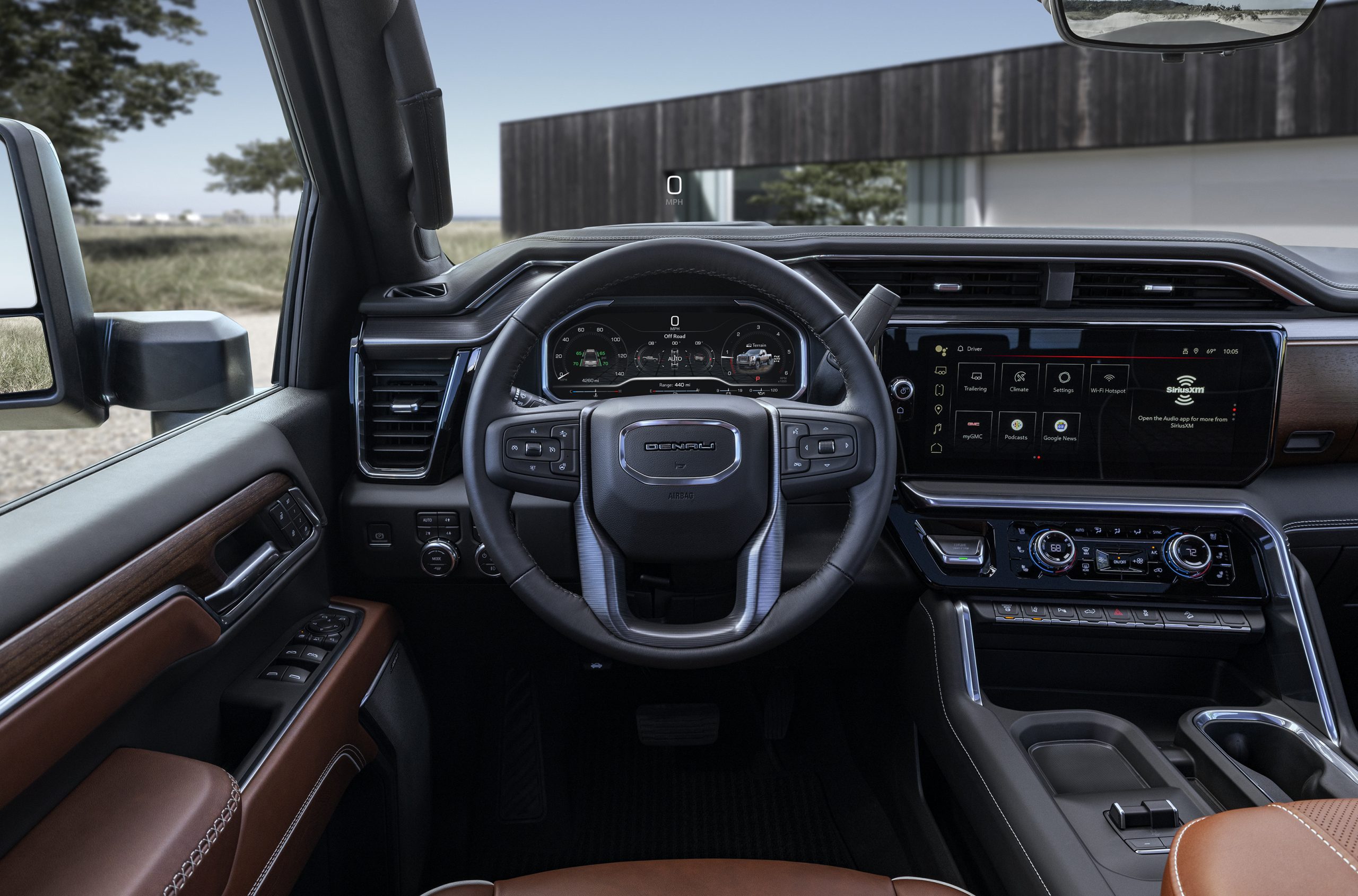 Gone are the old PlaySkool-type plastics and screens the size of a smartphone, replaced with better materials and a raft of high-tech displays. The centerpiece of Sierra’s new (and now competitive) interior is the available 13.4-inch tablet-style touchscreen. Situated in a landscape orientation, the infotainment jumbotron packs a yaffle of features sure to delight both the Id and Ego sides of an owner’s personality. More on that in a minute. Also on tap are an available heads-up display measuring 15 inches and a reconfigurable instrument cluster spanning 12.3 inches, creating a huge – and welcome – amount of digital real estate. 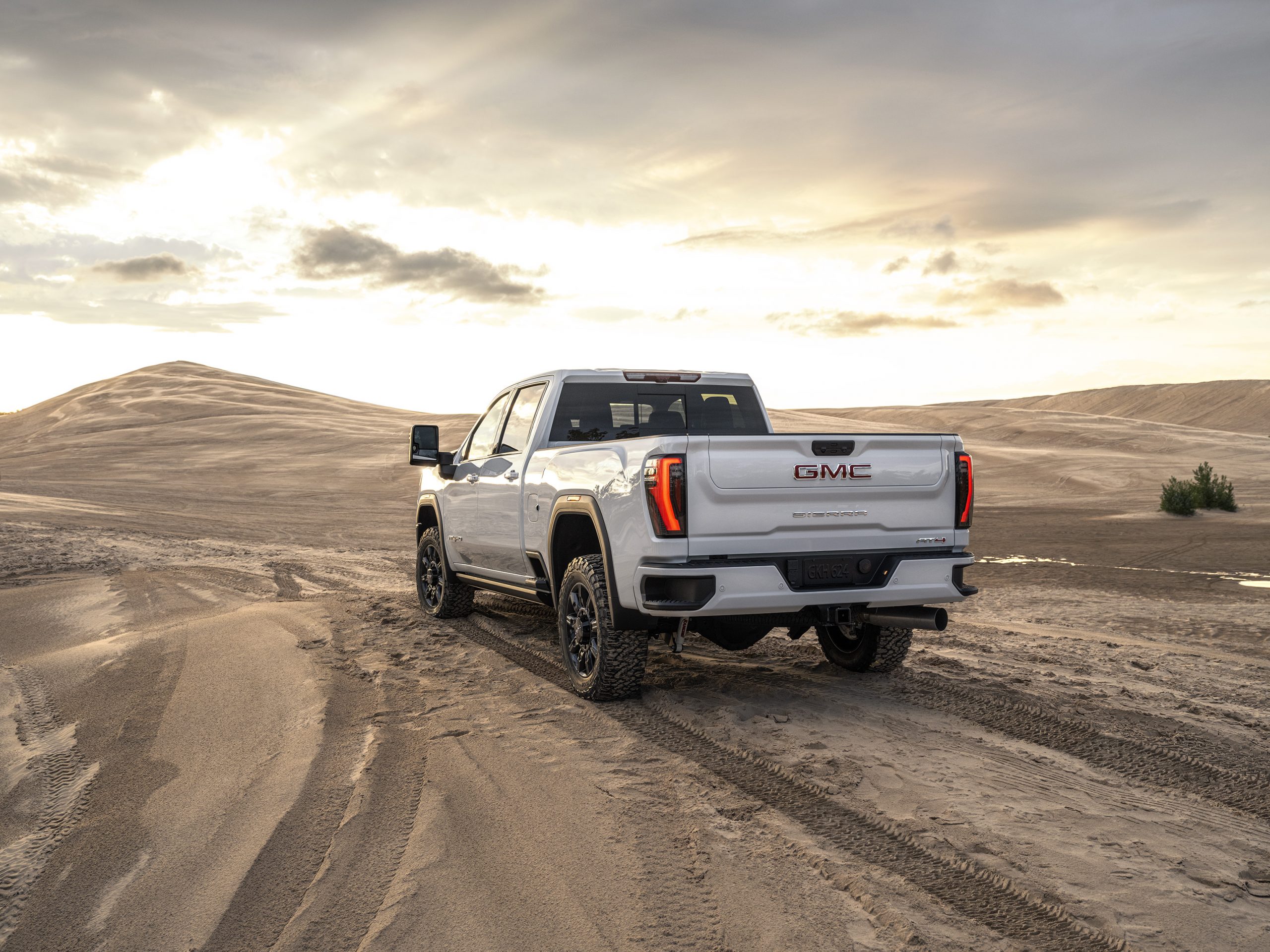 Recognizing owners of HD trucks appreciate both tools and toys in equal measure, that huge infotainment display serves up the likes of Alexa integration and controls for massaging seats in some models, while also being a hub for one of the most comprehensive suite of towing assists in this segment. The so-called ‘transparent trailer’ camera view has been expanded to gooseneck/5th -wheel rigs (one of fourteen views), blind zone alerts now extend to areas around the trailer, and a GCW alert now warns when drivers are overloading the truck. In short, GMC knows their customers tend to haul a lot of gear and are giving them the tools to do so safely. These screens and suites of digital helpers, combined with a massive leap in material quality, finally permit the Sierra HD to play on level footing with the big boys from Ford and Ram.

Under the hood, engineers have tweaked the Duramax turbodiesel for more power, jacking output to 470 horsepower and 975 lb.-ft of torque. While GMC has yet to break the four-figure barrier for twist, they are claiming a robust power curve which means there is up to 25 percent more torque available at low engine speeds in order to help with towing duties. Every Sierra HD, whether powered by the 6.6L Duramax or 6.6L gasser, now receives the company’s ten-speed automatic transmission. The gasoline-powered mill sees no change in stated output (401hp/464tq) but the extra transmission cogs should do a better job of keeping engine speed in the meaty parts of its power band. 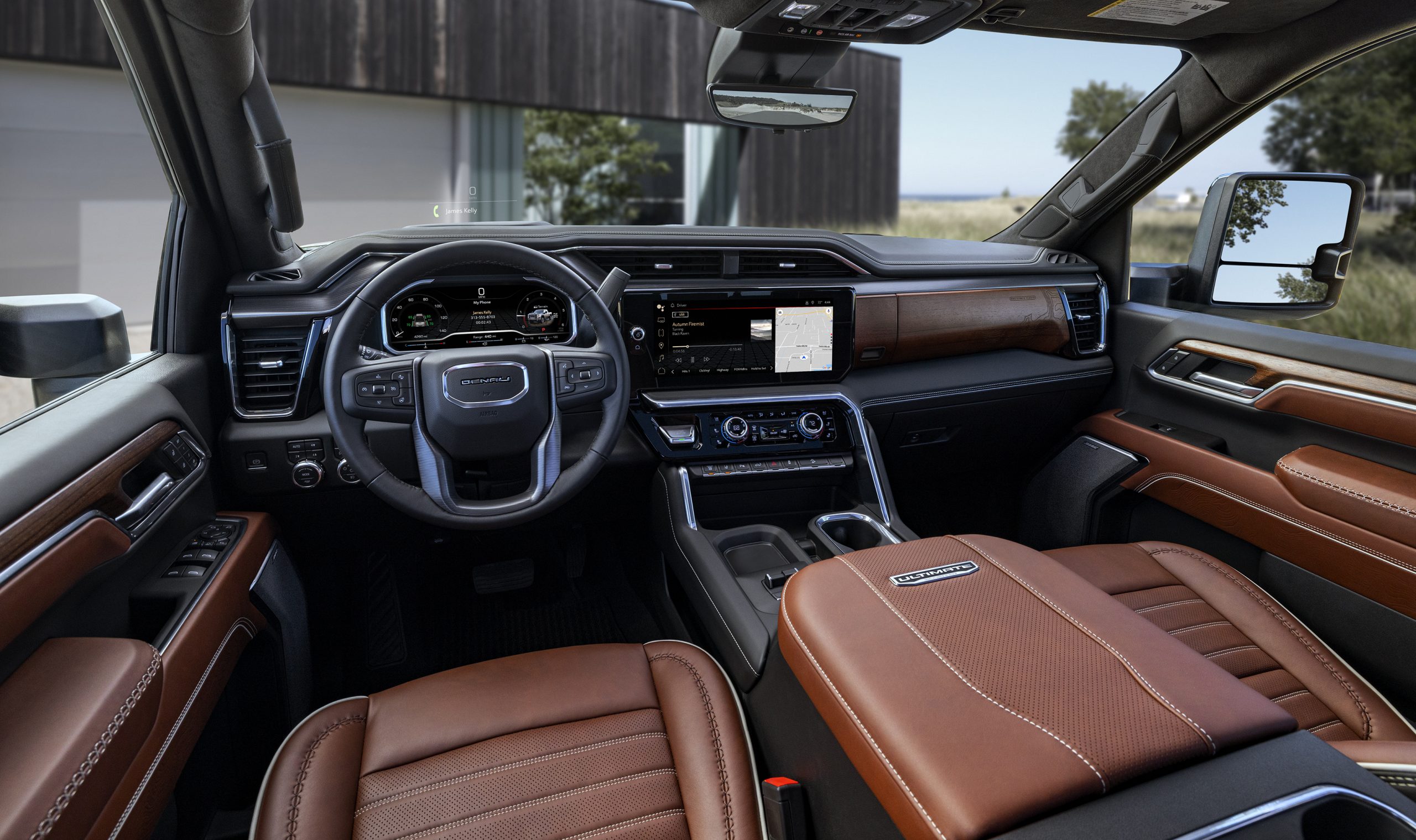 New for 2024 on the Sierra HD is a Denali Ultimate trim. First appearing on little-bro Sierra 1500, it takes the luxury appointments for which the Denali sub-brand has become known and shoots them to the moon. It is equipped with all the tech and power goodies mentioned above, plus items such as an exclusive Alpine Umber interior with open-pore wood trim. Full-grain leather swaddles most surfaces, including the door panels and power-adjustable massaging front seats. Look up to find a microsuede headliner, a large sunroof, and handy rear camera mirror. Exterior jewelry on the Denali Ultimate include the fantastically named Vader Chrome, a dark variant of traditional brightwork which graces the grille and badging. The origami MultiPro tailgate is standard, packing its own Bluetooth-sourced Kicker audio system. Show up on the jobsite with this truck and onlookers will think your either the foreman or project owner who’s skimming money off the top.

The words ‘Super Cruise’ appear exactly zero times in the official documents for this truck, leaving the Sierra 1500 as the GMC of choice for customers who desire that particular anti-fatigue feature. However, safety kit such as forward collision alert, automatic emergency braking, and lane departure warnings are all on board. New this year is an adaptive cruise control system which is designed to be used while trailering and to account for additional drag and increased braking distances when towing a trailer. Good enough, then. 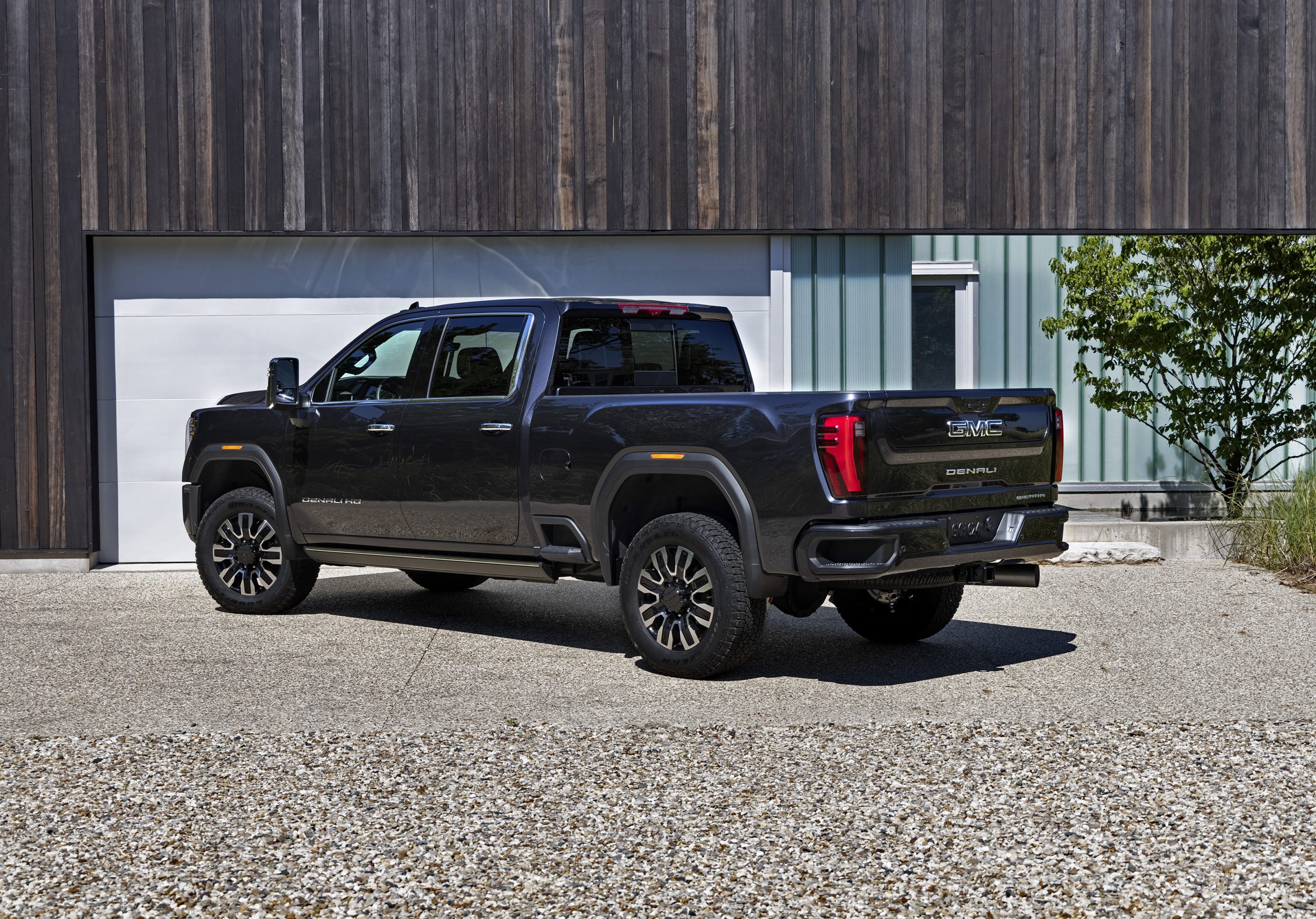 Don’t expect electrified, and certainly not full-electric, powertrains in a Sierra HD any time soon. Suits in the corner offices have mused that this segment will likely be one of the last to move in that direction, given the requirements of their customers in terms of towing and hauling. The forthcoming Sierra EV, which plays in the 1500-grade sandbox, is still on target for next year and will appeal to shoppers seeking an all-electric pickup truck in the visage of an F-150 Lightning or Rivian R1T. Meanwhile, the Sierra HD will remain unabashedly internally combusted for the foreseeable future.

The refreshed 2024 GMC Sierra HD arrives at dealerships in the first quarter of 2023, with the AT4X coming later that year. Pricing will be announced closer to the start of production.