Swoopy electric sedan is like nothing else on the road.

Join the Conversation (0)
LOS ANGELES -  It’s all Ioniq, all the time at Hyundai. Fresh off a year where the Ioniq 5 crossover seemingly won every major car award the world has to offer including World Car of the Year, they have come with quite the follow-up in the form of the 2023 Ioniq 6 sedan, an ultra-aerodynamic, futuristic-looking thing that started life as the Prophecy concept in 2020.

It has since morphed into something more suitable for the mass market but remains a car that, like its Ioniq 5 forebear, looks like little else on the market. One could argue that certain interior elements look a little like what’s seen on the Ioniq 5 but the similarities don’t range much further than a new adaptation of that car’s Parametric Pixel taillights. The headlights are a smoother, more teardrop-like shape (that looks actually a little more traditional than the items found on the Ioniq 5), the wheels are an edgy new take that have a bit of a ninja star look to them and where the Ioniq 5 is origami, the 6 is more flo-rigami. Its footprint is roughly that of the Ioniq 5, but with a smaller wheelbase albeit one that’s bigger than what’s found on the full-size Palisade SUV.

That shape helps it achieve a drag coefficient of .21 on European-spec models and .22 on the North American model because in Europe, the Ioniq 6 gets slimmer wing mirrors because they aren’t mirrors at all, but cameras. That’s not above board here, so traditional mirrors it is and they add that .01 of drag. Still, the Ioniq 6 remains the most aerodynamic Hyundai road car ever built. It’s right up there in terms of aero with the likes of the Mercedes-EQ EQS and BMW i7.

More than just providing the aero that helps achieve a range of 547 kilometres with the single rear motor car (that’s 100 more km than the Ioniq 5) and 498 km with the more powerful dual-motor AWD car (320 horsepower and 445 pound feet of torque versus the single motor’s 225 hp and 258 ft-lbs), the design also sends a message. 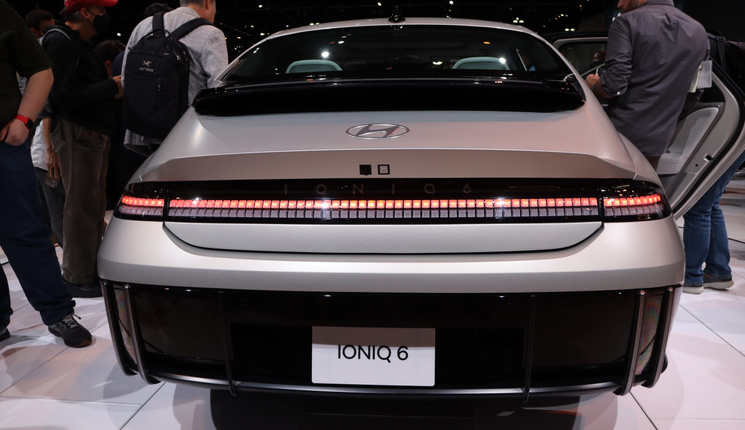 “How do you visually communicate efficiency?” asks Simon Loasby, chief designer for the Ioniq 6. “What looks efficient? Dolphins, sharks, peregrine falcons – that was part of the story. Look at nature. How does it solve fluid deficiency and that’s where we got into this single curve.” What he’s referring to there is how the shape of the Ioniq 6 is a single fluid motion – you don’t have harsh angles where the windshield meets the hood, or where the rear window meets the trunk. Which, by the way, features a functional spoiler styled to look like the shape of a Spitfire WWII fighter when seen from above.

Since there’s no engine under the hood, there’s no need for a radiator grille so you’ve got a drag-reducing front end that gets a black band to hide the parking sensors. It’s an incredibly clean look overall. 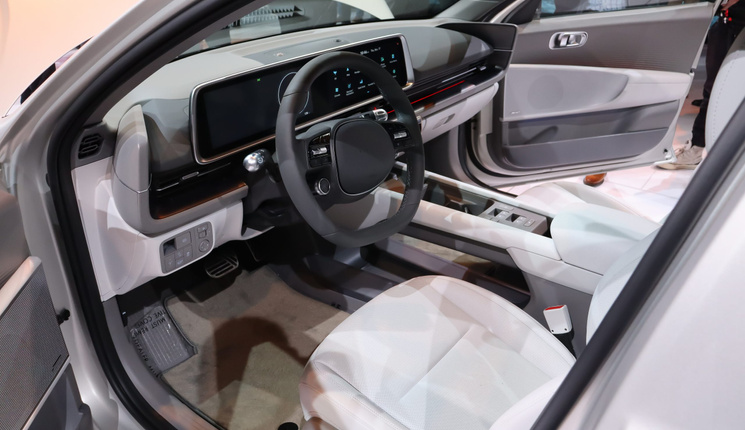 That “clean” theme continues inside, where it looks more like the Ioniq 5. It gets dual 12.3” displays for the gauge cluster and infotainment screens as well as a dash that only needs six buttons, two knobs, two toggles and a touch panel for your climate and radio controls. You won’t find a single Hyundai logo in here, either, but rather four small squares on the wheel hub that both represent “H” in braille and serve as a charge indicator when you’re plugged in, and when you first start the vehicle. Further reducing the clutter is an open storage bin beneath the centre console, atop which the window controls are placed so as to keep the door panels looking clean – Hyundai even went so far as to work with Bose to ensure the speaker grilles for the door speakers flow with their surroundings.

Other advanced features include 64 ambient colour choices that provide 4,000 different colour combinations that change as you start to accelerate, carpets made from recycled fishing nets, yarn constructed of recycled plastic bottles, eco-processed leather, and materials processed from sugar cane. 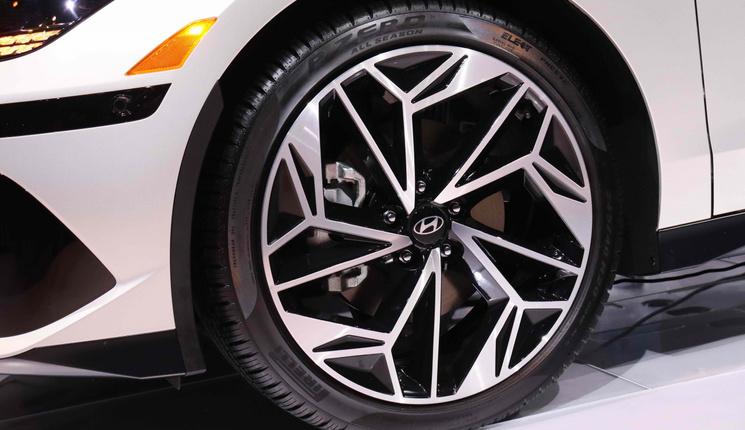 ”The younger generations, what turns them on is being unique, but also being about ethics,” said Loasby. “We kept on driving ‘ethical uniqueness’ into our design guys during our design briefings.” You see, while the Ioniq 5 is geared towards older buyers and larger families, the Ioniq 6 is aimed at younger buyers. Yes; that means Hyundai had to allow for a smaller back seat thanks to the more aggressive roofline and rear window angle, but in their eyes, younger buyers won’t mind that so much. Better you give them a car that looks good, and is a tech leader.

Part of being a tech leader includes reducing charge times, which Hyundai has done by enabling the Ioniq 6 to be charged on a 350 kW charger, providing 10-80 per cent charge in 18 minutes and 65 miles of added range in just five minutes. In addition to all that, the Ioniq 6 gets vehicle-to-load capability so you can charge devices, televisions, and whatever else while out and about. Seems a little more useful for a vehicle like the Ioniq 5 that may see a camping trip or two every year, but for a group that’s never far from its devices (or electric scooters and e-bikes), the more ways to charge them, the better.

All that styling is cool. The range is cool. The tech is cool but in this day in age, that talk of sustainability is the kicker. Sure; Hyundai isn’t the only automaker talking that way, but with the Ioniq 6 they are putting their money where their mouth is. Indeed, if they’re going to crack the younger buyer that not only isn’t buying cars but often isn’t even bothering with getting a license, significant strides are going to have to be made and the Ioniq 6 is a stirring continuation of what the Ioniq 5 started.