Join the Conversation (0)
DETROIT, MI – While its growing roster of EVs are the big attractions at the rebooted North American International Auto Show, Chevrolet made room in its booth for the reveal of the 2023 Tahoe RST Performance Edition, a new high-performance variant of its full-size SUV.

Designed to leverage motorsports learnings and police pursuit capabilities, the RST Performance Edition is the most powerful Tahoe ever built. Output from its 6.2-litre V8, which is paired with a 10-speed automatic transmission and standard 4WD, has been increased to 433 horsepower and 467 lb-ft. of torque. These are gains of 13 hp and 7 lb-ft., respectively, over the current Tahoe RST.

Chassis enhancements are extensive and include police-spec springs, retuned dampers, larger-diameter stabilizer bar, and police-spec chassis calibrations. The ride height has also been lowered by 10 mm (0.4 inches) up front, and 20 mm (0.8 inches) in the rear.

An interesting development note is some of the RST Performance Edition’s chassis components and suspension tuning were drawn from the Tahoe PPV (pursuit-rated police vehicle) package available to law enforcement. According to Chevrolet, many of vehicle’s dynamics were developed and calibrated by the same engineers. 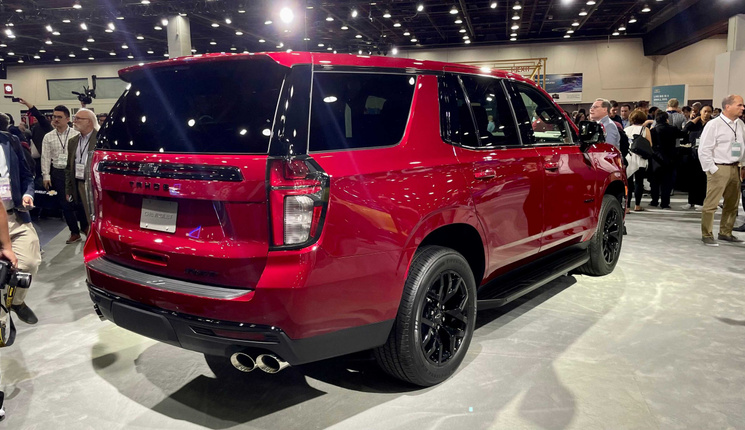 The pursuit of performance hasn’t come at the cost of practicality either, as the RST Performance Edition carries a maximum tow rating of 7,600 pounds (3,447 kg), keeping it in line with the base RST when equipped with the optional 6.2-litre V8.

In terms of interior enhancements, Chevrolet provided few details and the vehicle on the show floor wasn’t open for viewing. In terms of content, it was confirmed that the Tahoe RST Performance Edition will come standard with the Luxury Package, including, “a host of active safety features and driver convenience features,” but no specifics were provided. Sport pedals also come standard, as does a black RST tailgate badge.

Production of the Tahoe RST Performance Edition is slated to being at GM’s Arlington, Texas assembly plant late this year. A Chevrolet Canada rep indicated Canadian-market units should begin to land near the end of the year. Pricing will be announced closer to launch.