You can get it in both regular and extended length versions.

Join the Conversation (0)
The arrival of a full-bore “V” version of the Escalade probably shouldn’t come as much of a surprise; after all, the Escalade has been one of the brand’s bestsellers for quite some time now so you could see how a performance version will fit. Perhaps more surprising was just how long it took to arrive; Jeep has been churning out hi-po SRT versions of their Grand Cherokee for years, as have the Germans of their offerings. 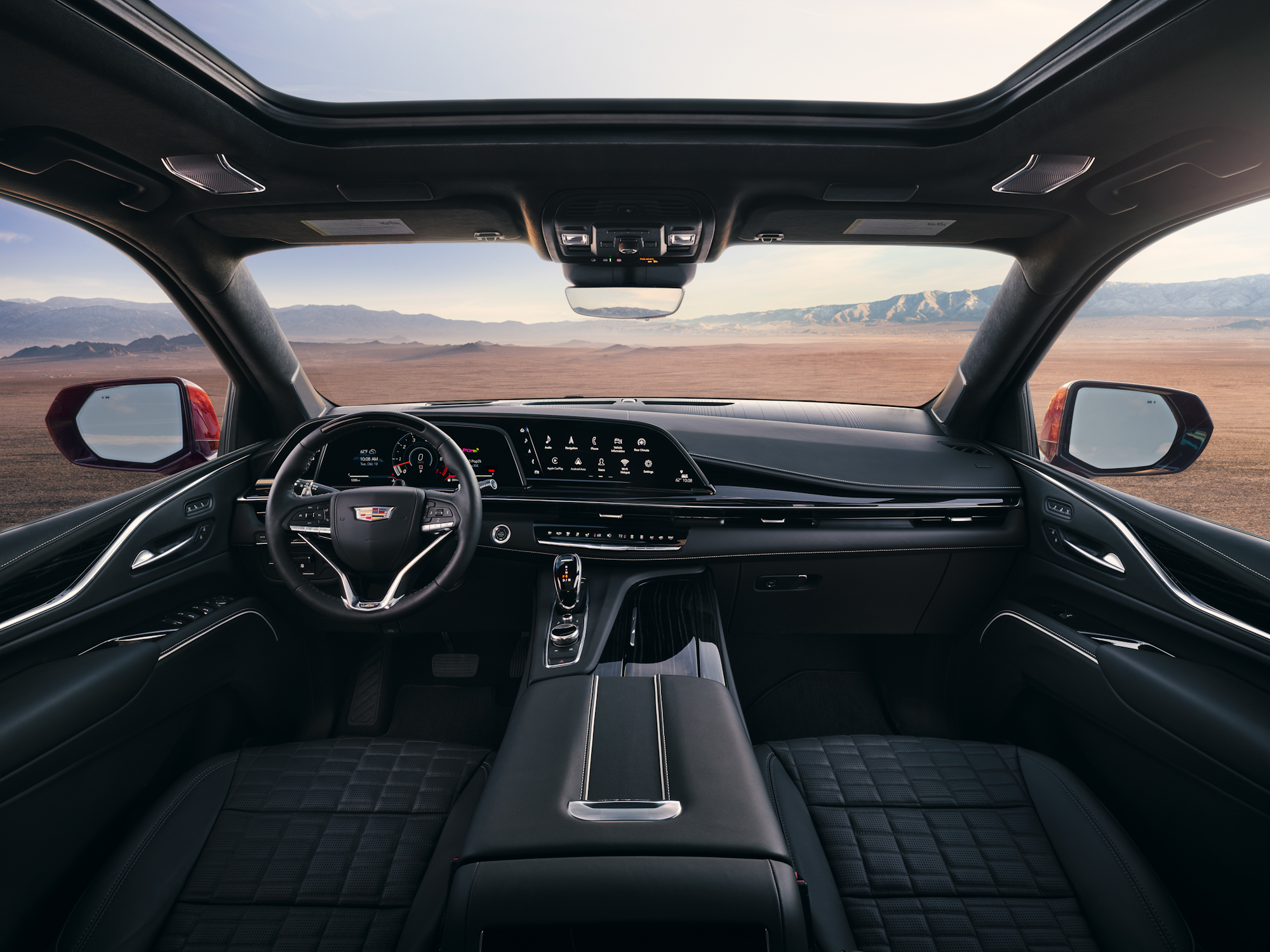 Now, the ‘Lade is an interesting study in that it kind of walks the line across two segments with a short- and long wheelbase version. Both Mercedes and BMW have a three-row model line above their two-row offerings, while Cadillac makes all of the Escalades three-row vehicles, with one – the ESV – getting a longer wheelbase and stretching longer overall. So, in a way, it has to fight a battle on two fronts. Which could be why a performance version hasn’t come to fruition until now, though Cadillac will tell you that their market research shows that only now is the time. 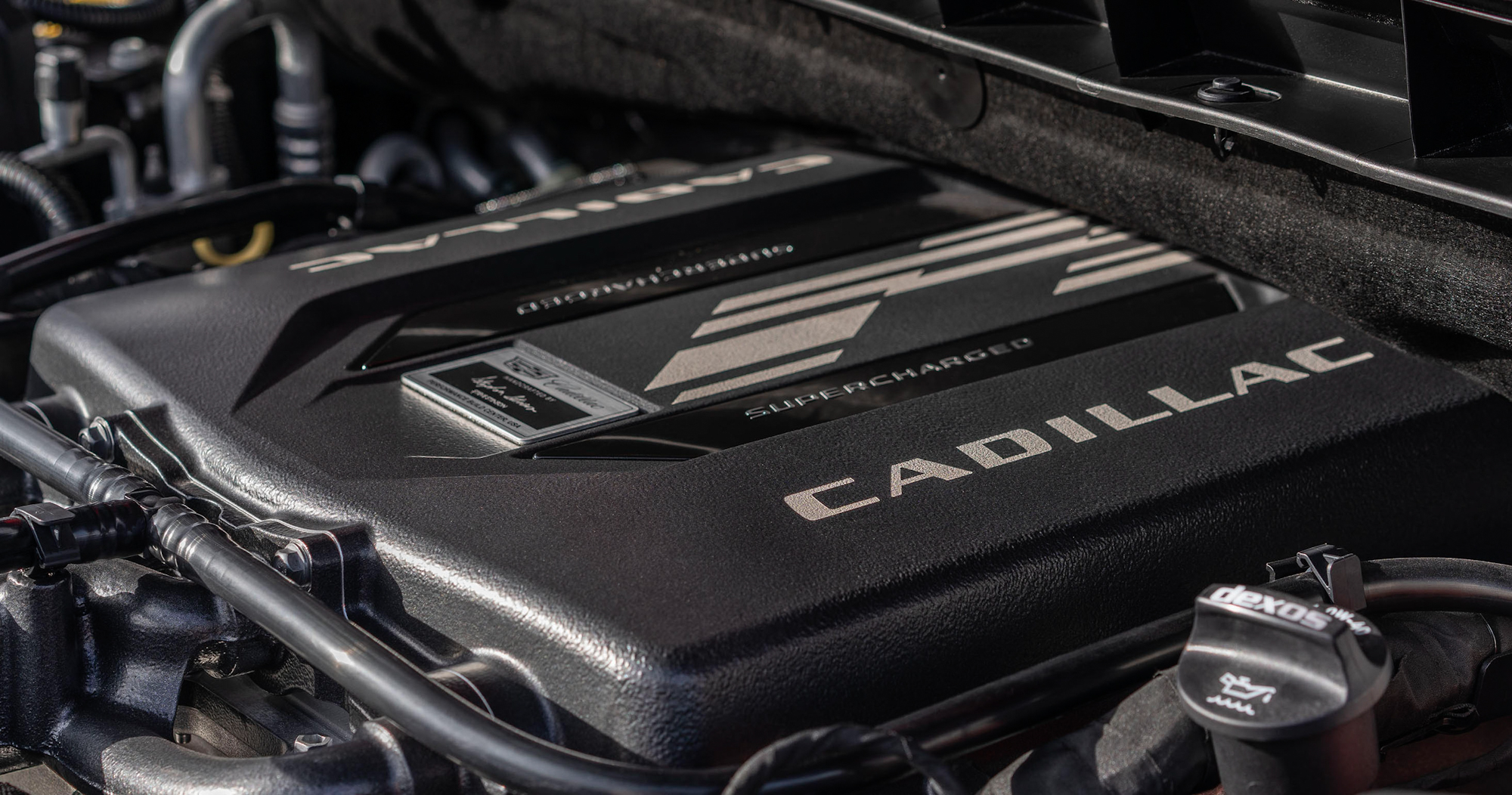 So it goes that for 2023, we’re getting both an Escalade and Escalade ESV with a 6.2-litre supercharged V8, built in the same place they build Corvettes: Bowling Green, KY. That’s just the engine, though; the vehicle itself will continue to be built at the Arlington Assembly in Texas. In order to keep everything in check, engine internals including the pistons, rods, and cylinders have been beefed up.

Power is rated at 682 hp and 653 pound-feet of torque, making the Escalade V the most powerful full-size SUV you can get, anywhere. Heck, it even makes more power than the likes of the Porsche Cayenne Turbo S. Nevertheless, Cadillac claims those figures (plus a specially-tuned 10-speed automatic transmission and 4WD) are enough to complete the 0-96 km/h sprint in 4.4 seconds and the quarter mile in 12.74 seconds at 177 km/h. Those aren’t simply performance SUV numbers; those are stretching into proper sports car territory.

Not too far in, however; asked about the possibility of a “Blackwing” version of the Escalade to bring it in-line with the recently released CT4-V Blackwing and CT5-V Blackwing sedans, GM was quick to point out that while “V” does mean “performance” above all else, “Blackwing” is yet another cut above that, aimed more at folks who may want to track their Caddys.

That’s not really the purview of an SUV weighing in at over two tonnes, no matter how much power you give it. Although you may be able to do some damage at the drag strip, provided you upgrade to some stickier rubber as Cadillac has stuck with three-season Bridgestone rubber for the Escalade V as opposed to switching to summer performance tires. This is, after all, still a luxury SUV meant to work as an everyday vehicle, first and foremost.

The rubber and wheels are complimented by the standard fitment of an electronic limited-slip differential as well as self-adjusting magnetic dampers. Those can also be individually set and accessed via the steering wheel-mounted V-button. In addition to the suspension, the exhaust note, powertrain response, steering, brake pedal feel, and AWD system can all be set and accessed via that same button. If you just want to lope comfortably around town in your luxury cruiser, selecting “Tour” – that joins Sport and Snow/Ice as the other baked-in drive modes – softens everything, though Cadillac is saying that as speeds increase, the V will feel more “committed” than other Escalades, even in Tour mode.

Style-wise, the V benefits from unique 22” wheels shrouding red Brembo brake calipers with six pistons up front, a blacked-out grille, quad tailpipes, V-Series badging inside and out, and a lowered suspension for a purposeful look. Inside, optional “zebra wood” inserts do well to compliment the semi-aniline leather and a 36-speaker AKG audio system comes as standard.

Of course, you can’t look at this Escalade’s dash – or that of any other Escalade, for that matter – and not notice the 38” curved OLED display that dominates the proceedings, just as it does on the Platinum-spec model on which the V is based. Indeed, it’s rivalled only by Mercedes-EQ’s Hyperscreen when it comes to overall size and in the V, it gets special gauge cluster graphics to further drive the point home that you’re in a special ‘Lade. GM’s proprietary Super Cruise autonomous tech will also be available, but will count as one of the few options you can spec for the V, which comes pretty much loaded at base.

It also comes in pretty short supply; the Escalade V is going to be a very limited run choice when it goes on sale later this year. So if you’re thinking that this is the way you’ll want to go, it’s our suggestion that you make it down to your local Cadillac dealership toute suite.