It will also come with a 6-speed manual transmission.

Join the Conversation (0)
The 2023 BMW M2 might not have the oddball giant kidneys of the M4, but that doesn't mean BMW has gone bland or even just conventional with the new sport compact. Instead, it looks like some sort of Teutonic Super Duty Trans Am, with box-style flares at each corner to hold big wheels and tires. There are also near-M4 levels of horsepower under that tall hood.

We'll keep the styling discussion short: massive Group B rally-style flares are good. The nose might not be, but you won't care once you're inside.

Because once you're inside, you'll be commanding the new 3.0L twin-turbo I6. At 453 hp, it's just 20 horses under an M4. (and 48 more than the last M2) That's before the inevitable M2 Competition shows up and brings even more power. Peak torque is 406 lb-ft if you're counting. 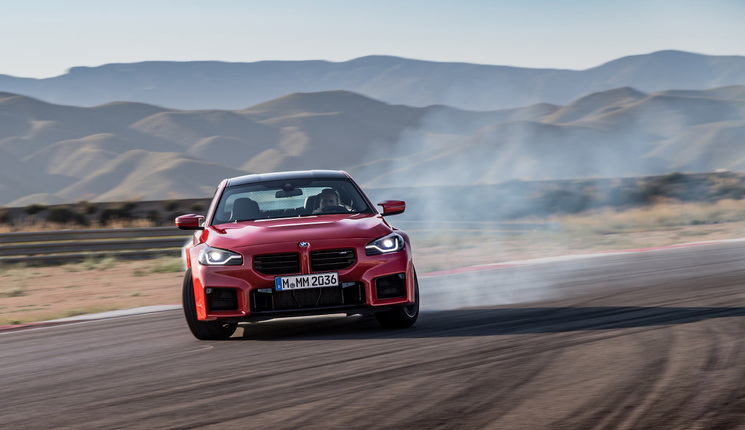 The M2 will have a stick, too. A six-speed manual is the default gearbox or you can opt for an eight-speed automatic. It's a traditional automatic, the dual-clutch is gone. Either way, all of that power spins the rear tires. This is a traditional RWD machine.

Based on the new 2 Series coupe, the car is longer and wider than the old M2. Longer by 103 mm, wider by 33. It's still smaller than the M4, but the car is growing.

That bigger chassis gets a healthy dose of M-level stiffening. New strut tower links, vertical braces, an M-specific aluminum front axle subframe, even stiffer C-Pillars and reinforcements at the trunk. The effect is to let the adaptive suspension do its job better. And improve the ride, says BMW.

BMW fits M-specific brakes, the front rotors measure in at 15-inches, the rears about half an inch smaller. They use M brake pad compounds so they'll stand up to hard use. BMW has also integrated the braking system's computerized bits into a single module. That lets it react more quickly and work better with the stability control. It'll also let you pick from a pair of brake "pedal feel" settings.

Other tech wizardry includes M Drive Professional. That's the name for BMW's combo of M-grade traction and stability control - TEN! different stages - but it comes with some other tricks. There's a lap timer that will let you compare your quickest laps around your local track. There's also a Drift Analyzer that monitors and compares how much time you've just spent going sideways. Closed circuit, do not attempt, of course. 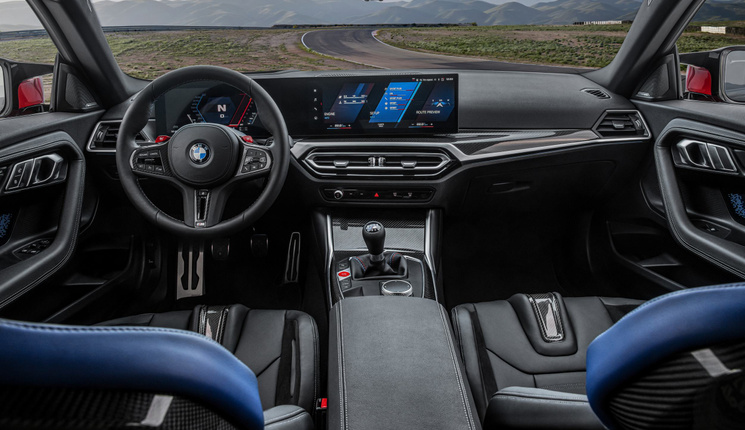 Inside the M2 will get BMW's new curved display. Like in the other models that have it, it's actually two displays. One for the dash and a 14.9-inch screen for the infotainment system. The digital dash will get all sorts of special M modes and custom options.

The standard seats are buckets with thicker bolsters than before. They're offered in black or cognac leather, but either way you get illuminated M badges. Pick the carbon package, which also unlocks track-ready tires, and you get carbon buckets that save 11 kilos. Likewise, you can pick from a larger sunroof or a carbon panel roof.