Canada gets 4WD as standard

Join the Conversation (0)
Can you believe it’s been almost eleven years since we saw a significant change in the Frontier? And even then, the change was little more than skin deep and was otherwise a carryover from when the Frontier was last given a full redesign for the 2005 model year. Up in Canada, meanwhile, the wait for some significant Frontier news has been even longer; when the 2020 model received a new powertrain, the Canadian market was skipped.

Well, wait no more because we now have that powertrain, only that’s only a small part of the story as it’s wrapped ‘round an all-new truck for 2022, one that’s a whole lot bolder looking and more purposeful than previous.

It starts with the grille; actually, it starts with the whole front fascia, really, as it’s been crafted to look as if taken from a single block of steel. And plastic, I guess – but I digress.

For the areas that required fastening – say, where the fender meets the headlamp lens or taillamp lens – the panels have been given a kind of tongue-in-groove look, which is actually pretty original and unique. Although not totally unique as lead designer Hiran Patel says that the Nissan hardbody truck from the ‘80s was the inspiration that lead to that “as one” look. The larger space between the windows and rocker panels, meanwhile, also serves to recall the older truck and really adds a nice level of chunkiness to the proceedings. The bedwalls are also taller to ensure they properly meet the bottom of the side windows. 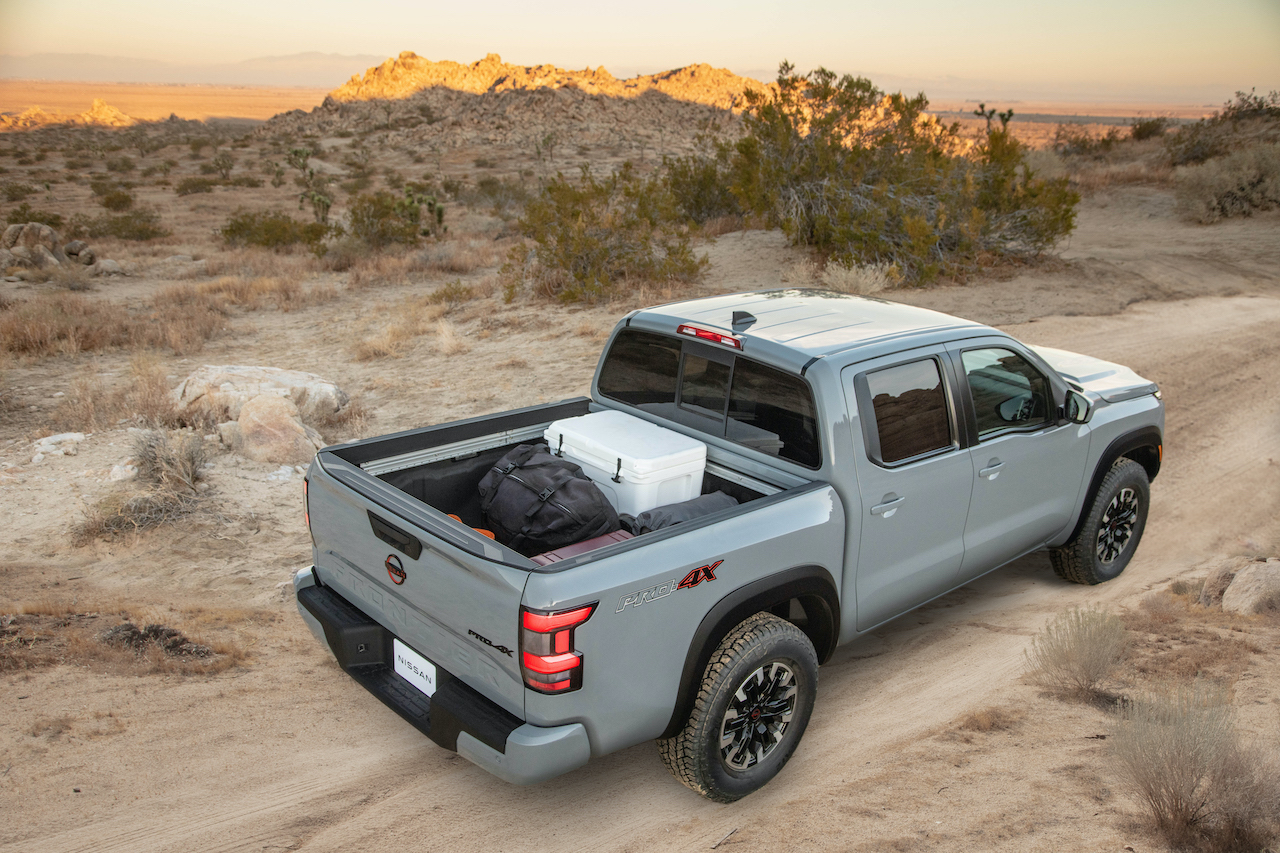 Other great details abound especially on the Pro-4X package which gets underfloor skid plates the cover the gas tank and transmission, red tow hooks and a new take on the new Nissan emblem that sees it painted red. In Canada all trim come standard with 4WD unless you include the 2WD special order King Cab S truck that is reserved for fleet ctomers. Other than that, no 2WD as according to Nissan, 2WD just doesn’t sell in Canada meaning we get 4WD at base. Which is mostly good, though we won’t see the 3,408-kilogram tow rating the U.S. is reporting, because their figures are based on 2WD trucks. With 4WD the base S (and burliest tower) is good for 2,944 kilos. Still plenty for jet skis and the like.

Both King Cab and Crew Cab are available for every model except base S, which gets only a King Cab option and only in Canada can you get a Pro-4X with the smaller King Cab. All King Cab models get a six-foot bed, while Crew Cab spec means a five-foot bed unless you select the SV long-wheelbase model (3,550 mm as opposed to 3,200 mm), which opens up enough space for a Crew Cab and the longer box.

A manual transmission, it seems, is also no longer in the cards as every Frontier sold both in Canada and the US gets the exact same powertrain: a 3.8-litre V6 good for a generous 310 horsepower and 280 pound-feet of torque, fed through a nine-speed automatic transmission.

On the subject of transmissions and powertrains: since every Canadian Frontier gets AWD, every truck gets a shift-on-the-fly 4WD system with 2WD, 4HI and 4LO modes that are connected to an electronically-controlled transfer case. There’s also hill start assist and hill descent control while the Pro-4X model provides an electronic locking differential.

Of course, it doesn’t stop there for the Pro-4X as it also gets special Bilstein shocks and those aforementioned underbody panels. For those looking for even more performance bits, Nissan did confirm that its Nismo performance division is already working on installable upgrades for the new Frontier. 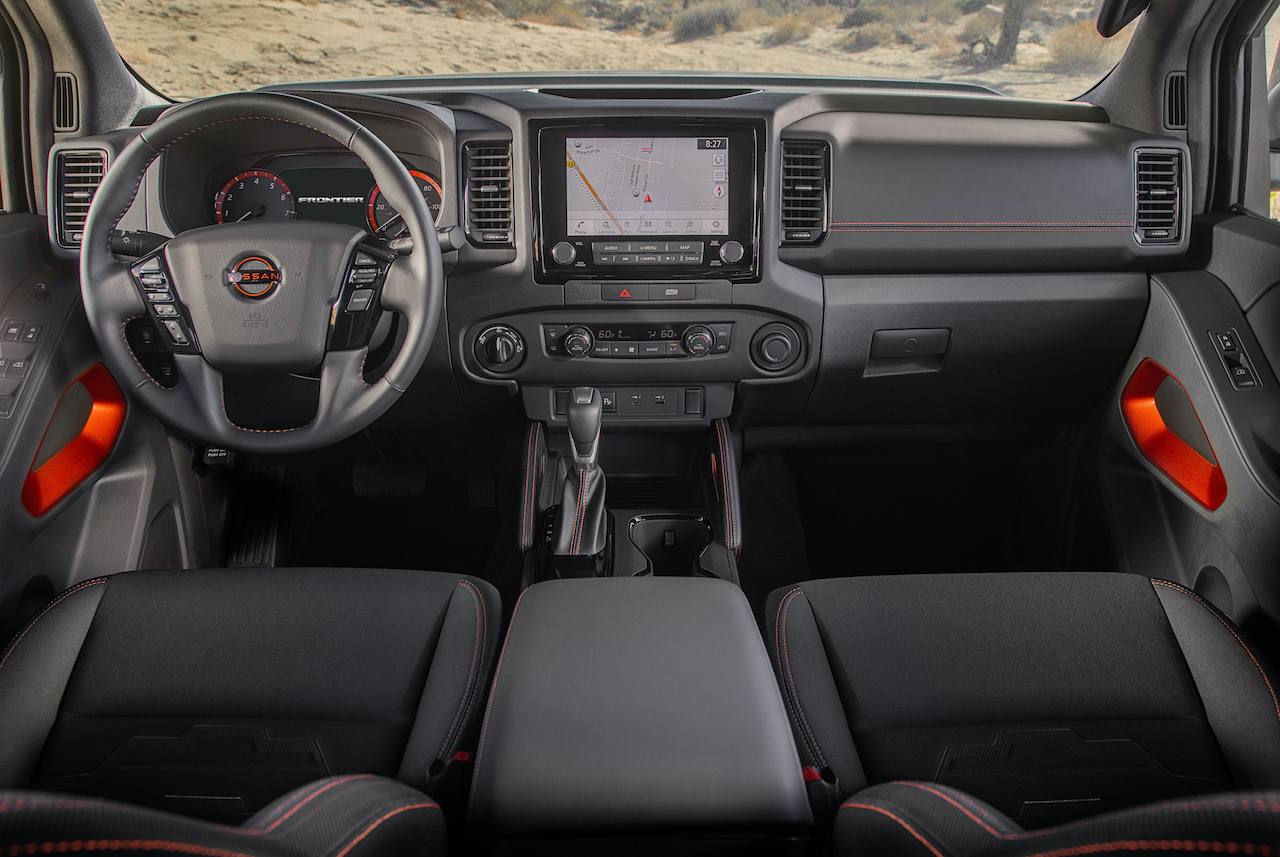 Inside, we find more of the chunky, blocky styling language that’s been applied to the exterior. The dash, for example, looks to be divided in two but held together by an x-brace that also doubles as the centre stack – if you look closely, you can see more of the tongue-in-groove styling used for the head- and taillights.

The interior is also finished in materials and colours chosen to reflect outdoors gear – think neon oranges and flat greys – and the materials have been chosen for their durability. It should come as little surprise that Apple CarPlay and Android Auto come standard, while wireless charging (but no wireless CarPlay) is an added option along with a Pro-4X-specific nine-speaker Fender audio system. All that is controlled, meanwhile, by an eight-inch touchscreen while a nice-incher is available as an option.

In addition to getting the bonus Pro-4X King Cab option in Canada, we also get Nissan Safety Shield 360 tech as standard that adds rear auto-braking and cross-traffic alert, automatic emergency braking with pedestrian detection, blind spot warning, lane departure warning and high beam assist, as well as intelligent adaptive cruise control. This being a Nissan, the Frontier also gets the brand’s very good Around View parking camera.

That’s some pretty good kit for a base truck but don’t ask us how much all that’s going to cost; Nissan hasn’t announced that as of yet.