The Navigator will be available with Lincoln Active Glide, the brand's answer to Cadillac’s Super Cruise

Join the Conversation (0)
Sitting on its perch as the genesis of Detroit's uber-luxurious SUV market - it appeared one model year prior to Escalade - the Lincoln Navigator receives a slew of updates and refinements for 2022.

Having found its out of the wilderness by ditching the alphabet soup naming convention and binning its krill-hungry grilles, Lincoln seems bent on retaking some market share from Cadillac and a few other brands in this eye-wateringly expensive segment. While the concept of luxury once focused solely on the level of interior and exterior opulence (which the Navigator still has in spades), customers now often look for bleeding-edge technology including jaw-dropping infotainment screens and advanced driving aids.

Speaking to the latter, the 2022 Navigator will be available with Lincoln Active Glide, the brand's answer to Super Cruise being hawked by Cadillac. ActiveGlide is an evolution of existing tools like intelligent adaptive cruise control and lane centering, working with advanced cameras and radar so drivers can operate the SUV hands-free on prequalified sections of divided highways. 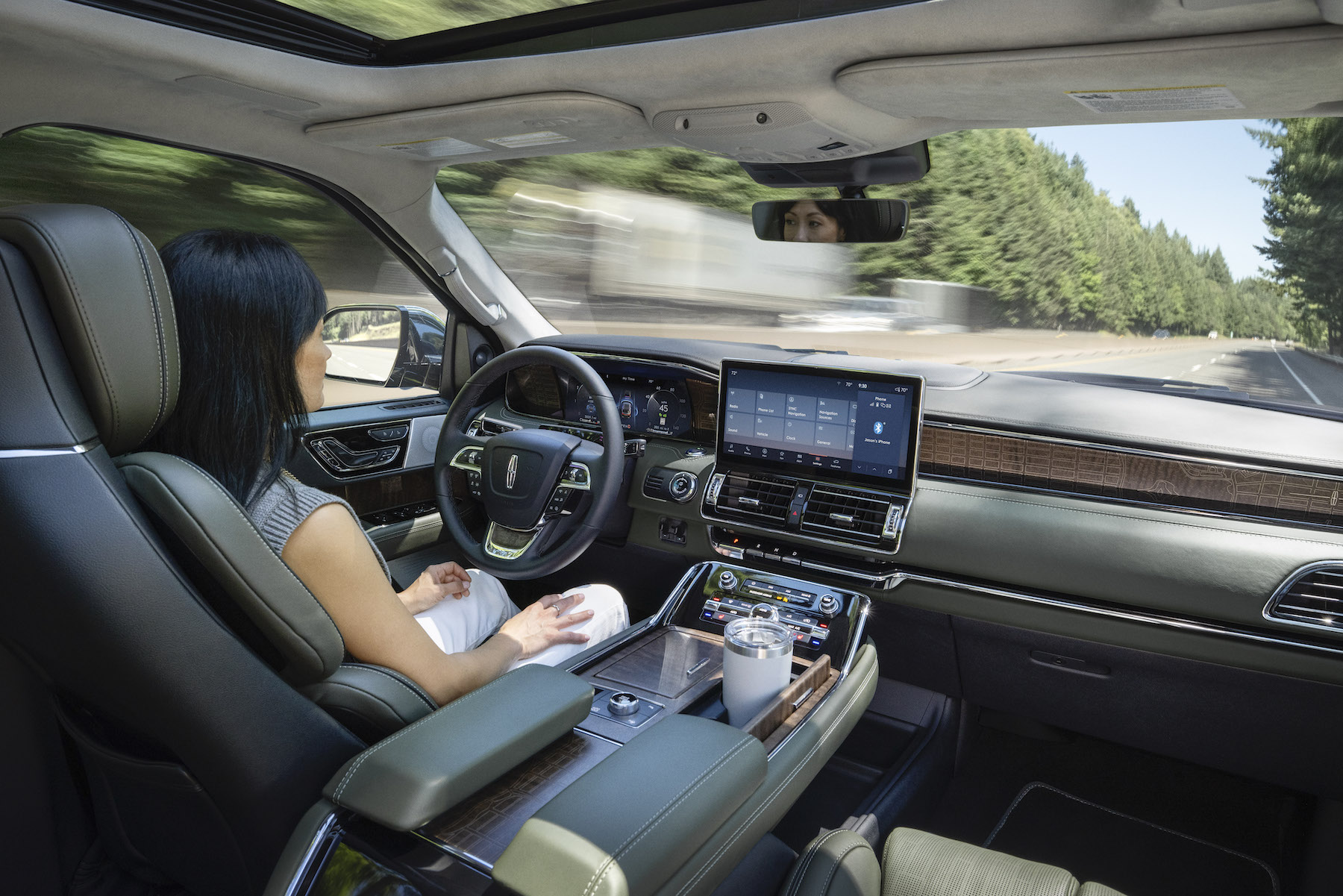 Unlike the Caddy which embeds a light bar in the steering wheel to indicate when the system is on, ActiveGlide uses blue light cues on the digital cluster and heads-up display. A driver-facing camera in the instrument cluster monitors eye gaze and head position to help ensure the pilot is paying attention. Your author will note ActiveGlide is a far better name than similar technology called Blue Cruise that's utilized by its Ford cousin.

Elsewhere in the interior, Navigator now deploys the company's Sync 4 interface for infotainment duties, permitting wireless smartphone integration and all manner of over-the-air updates. A new 13.2-inch screen stands proudly on the centre stack, perched atop a pair of climate vents and tactile controls for audio and ventilation. Those buttons and dials are a welcome drink of water in the desert that is the current state of 'touchscreen everything' in some competing products. However, vast swaths of empty space on each side of the Navigator's gauge cluster are unlikely to impress anyone who likes the jumbotron cross-cabin displays found the Escalade.

But ‘wowing’ passengers with busy screens isn't exactly Lincoln's M.O. these days. They've subscribed to a philosophy of 'Quiet Flight', which intends to create a so-called sanctuary for those aboard their vehicles. In this, Lincoln seems to succeed. For 2022, they've expanded the availability of their Active Motion massaging seats to the second row of chairs, which is said to be a first in this segment and controlled via a 5.8-inch digital module within easy reach. An available 28-speaker Revel Ultima 3D audio system brings the goods in terms of concert-like sound and, in the spirit of creating a calming atmosphere, warning buzzers for open doors and the like have been replaced by symphonic chimes recorded by the Detroit Symphony Orchestra. 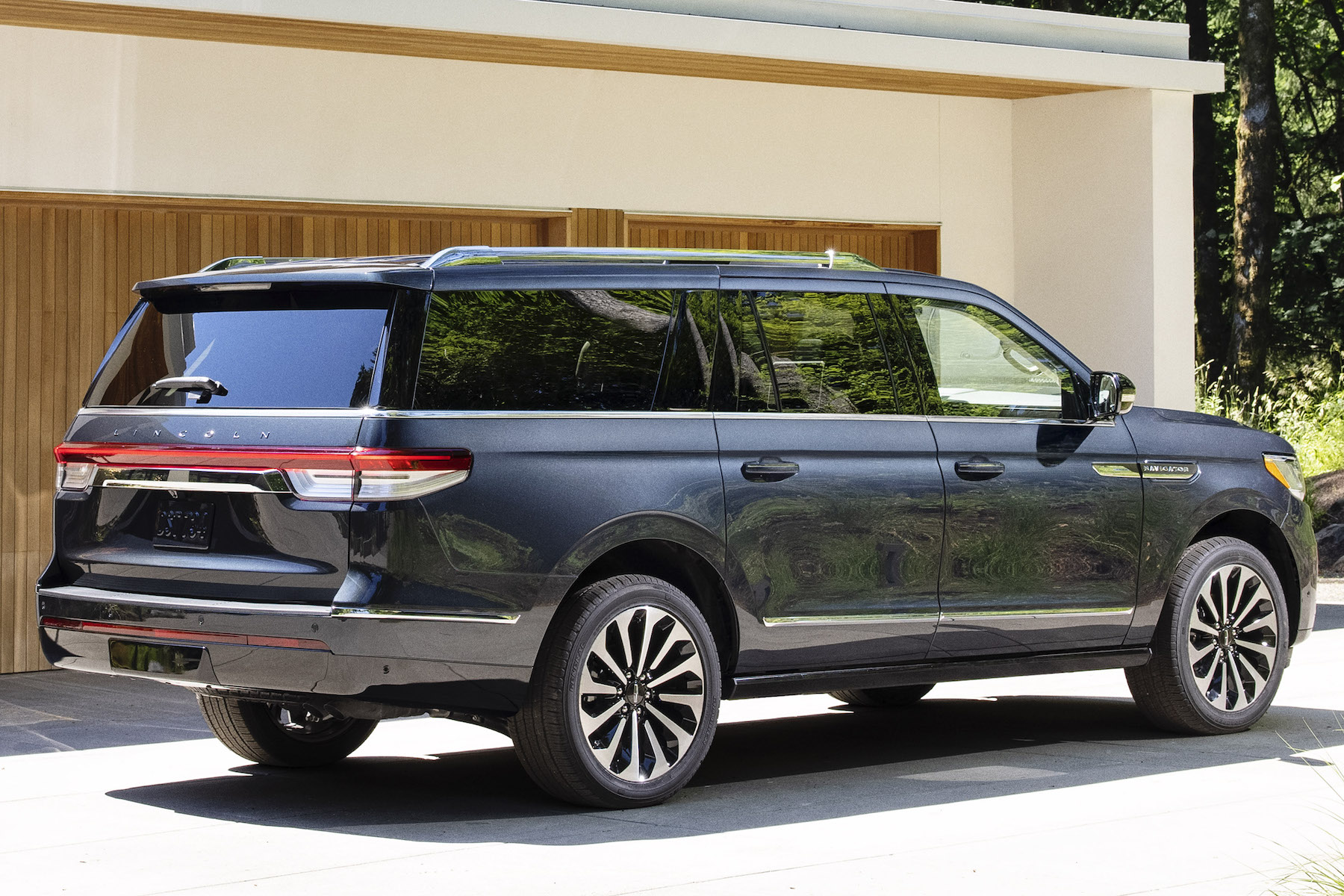 Neighbours will know you popped for the 2022 model thanks to revised front and rear fascias, incorporating new tail lamps that have more depth and texture than last year, with a too-cool welcome lighting pattern creates an LED dance that fades from the centre outwards to Navigator's edges. Up front there are headlamps which have a quad-peeper look to them, plus a more upright grille described by one Lincoln exec as a king's crown. Black Label trims will get their own brightwork pattern, if you're wondering.

There's no V8 to be found under the hood of a 2022 Navigator, but that fact hasn't harmed the levels of power this thing can belt out when pressed. Its 3.5-litres twin-turbo V6 is good for 440 horsepower and 510 lb-ft of torque, impressive numbers when compared with its competition, particularly its cross-town rivals. New to the model is Adaptive Suspension with Road

Preview, which deploys 12 sensors and a forward-facing camera to read the road ahead (and keep an ear to steering, acceleration, and braking) in a bid to prompt suspension adjustments to mitigate unpleasant impacts.

In a fit of practicality, Navigators equipped with the heavy-duty trailer towing package will earn Pro Trailer Backup Assist tech to help make backing up with a trailer or boat as effortless as turning a dial. Given that the moneyed set who are in the market for a rig like this are likely to be hauling horse trailers and the like, this is an excellent feature not found on similar machines from other brands.

The new Navigator will be built south of the border in Kentucky. It is scheduled to arrive in dealerships early next year.