2022 Infiniti QX60: Everything you need to know

Join the Conversation (0)
Count the Infiniti QX60 among the auto industry’s pandemic-induced delays: the automaker previewed the second-generation QX60 with its Monograph concept last September, and here we are 10 months later finally getting a look at it up close. For those looking for an elegantly styled yet reasonably priced luxury three-row crossover, this may have been worth the wait.

We’ll need to wait a while longer to drive it, but the upgrades previewed here look promising. Here’s everything we know so far about the upcoming Infiniti QX60, which will arrive in Canada as a 2022 model this fall.

The window swoop is no more


In its time, the Infiniti rear window swoop was one of the most distinctive visual design signatures on the road. Here, the new QX60 has lost it in favour of a floating roof motif. Given that the new QX55 two-row coupe SUV also doesn’t feature the swoop, it’s safe to say the brand is in the process of moving on.

Three of the QX60’s four grades come with a roof colour that matches the body paint, but the top Autograph grade is distinguished with a two-tone finish including a blacked-out roof. This is repeated on the interior, where the headliner in the Autograph is black as opposed to the beige found on other grades.

The new grille features an undulating pattern that’s said to be inspired by folds of origami. Inside the Autograph, black wood inserts are surrounded by quilted leather. 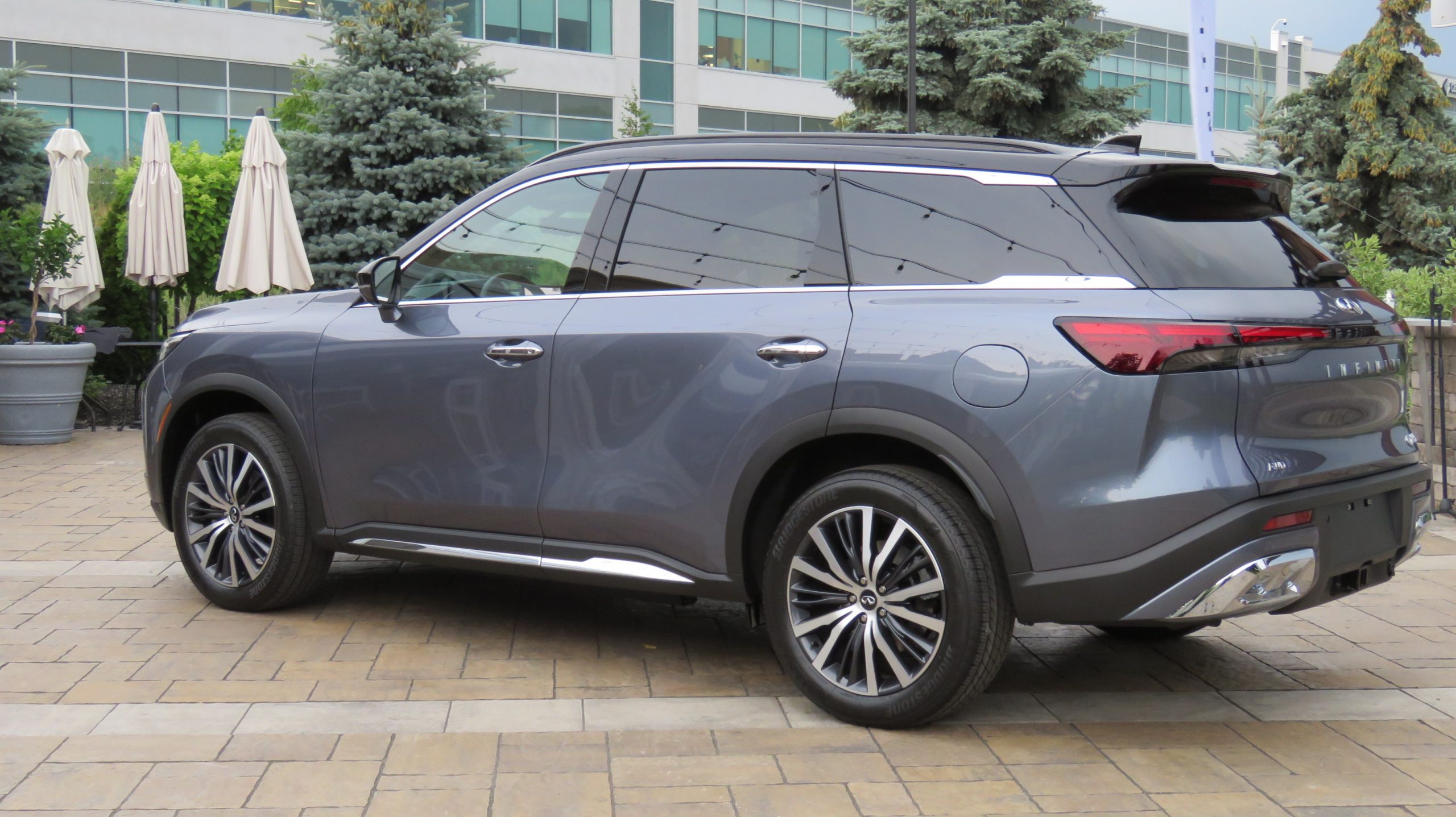 The engine carries forward, but the rest of the powertrain has been updated


Under the hood, the QX60’s engine is the same naturally aspirated 3.5-litre V6 found on the outgoing model, producing 295 hp and 270 lb-ft of torque, though it has been tuned slightly for improved fuel efficiency. The transmission gets a significant upgrade, however, swapping the CVT for a shift-by-wire 9-speed automatic, which should improve acceleration at lower speeds.

All-wheel drive is standard, and the former multiplate system gets upgraded to a single-plate setup, which the automaker says will make it quicker to respond. This system keeps 100 per cent of available torque at the front axle by default but can distribute up to 50 per cent to the rear on demand.

Most winter comfort features are standard


Heated leather-trimmed front seats with eight-way power adjustments, a heated steering wheel, heated outboard mirrors, and a heated wiper park are all standard equipment from the entry-level Pure grade. Heated second-row outboard seats, plus ventilated and massaging front seats, are included on both the Sensory and Autograph grades, though only the Autograph receives the second-row captain’s chairs. 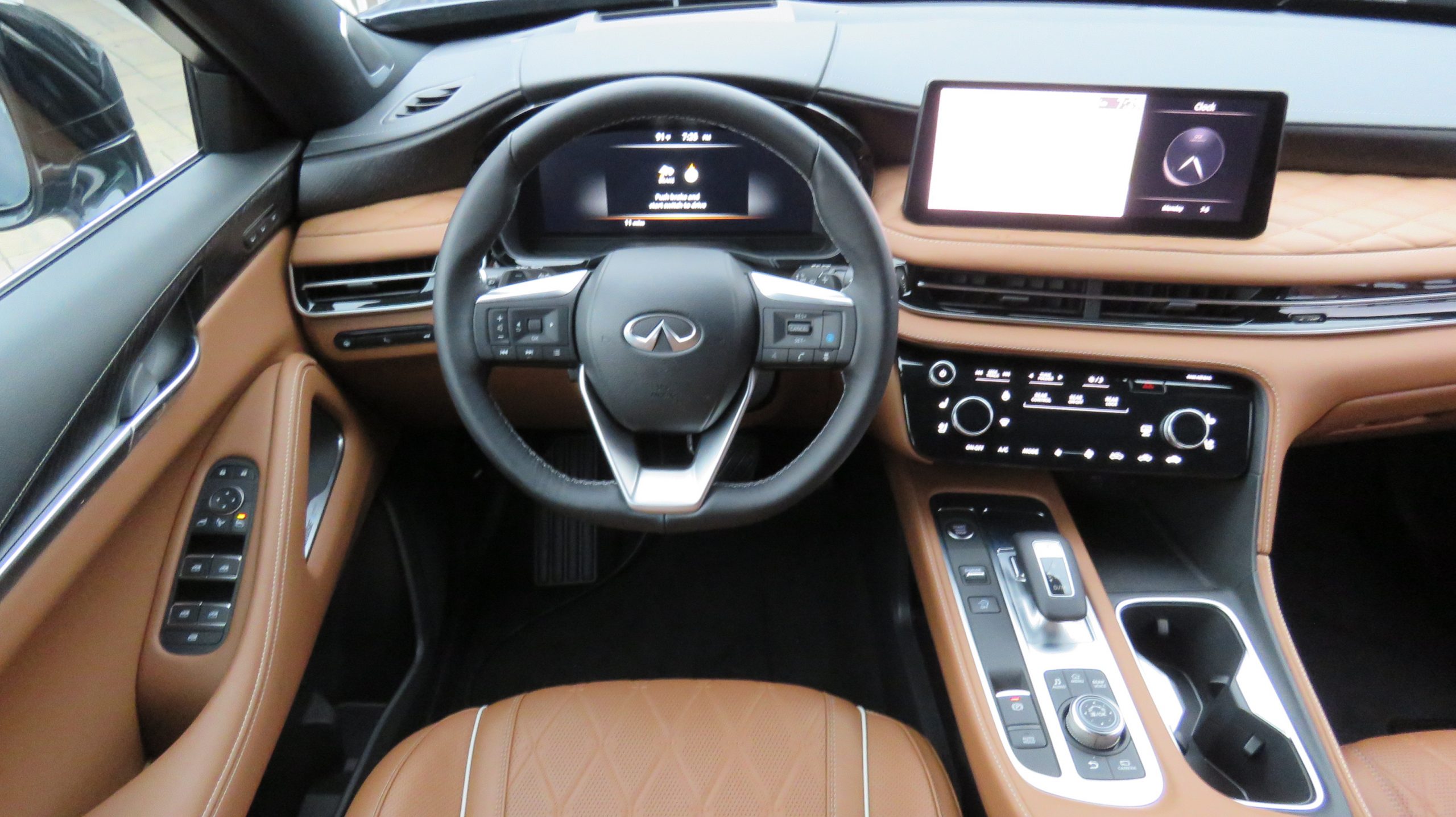 
The former 8-inch screen gets swapped for a standard 12.3-inch system that can be interacted with either by touch or via the button and dial cluster on the centre console. Apple CarPlay is now wireless, though Android Auto still needs a cable for now. The large backlit single-panel HVAC control appears dark when the vehicle is off and lights up once the QX60 is started. Though only the hazard lights get a hard button, volume and temperature controls remain on their own dials. The rest of the controls are integrated into the flat panel, though it does provide clear haptic feedback. A second 12.3-inch screen for the fully digital instrument cluster is included from the Luxe grade. 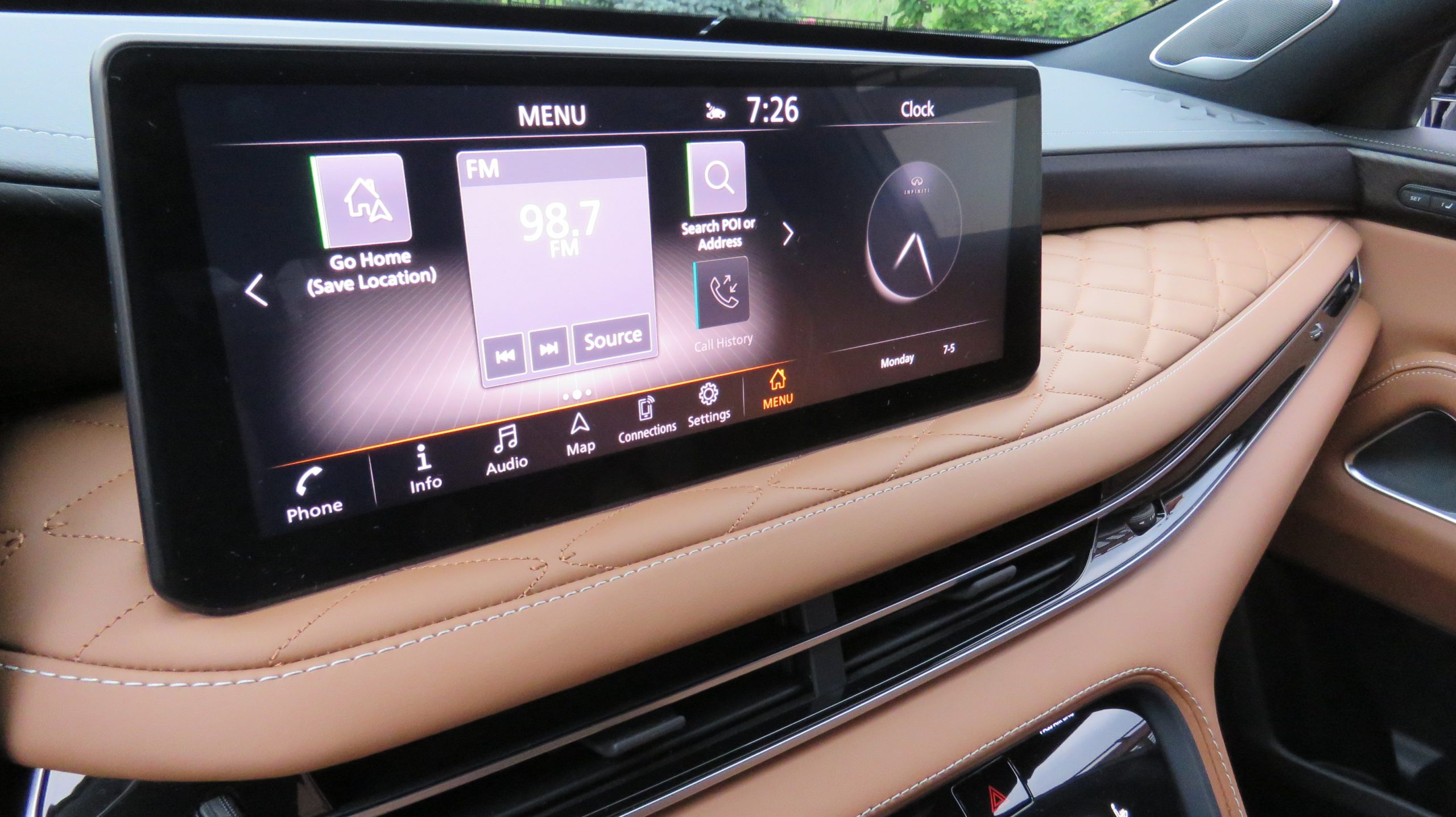 Some family-friendly features have been added


A new split-pane panoramic sunroof is standard across the line-up. The second-row seats can now be pulled forward for third-row access while holding a car seat in place, and the action is controlled via a new one-touch button release. There’s still no rear entertainment system, but this may not matter with one USB-A and one USB-C port for the second row and one or two USB-A ports for the third row depending on the grade. (Whether those third-row seats will be very comfortable isn’t obvious on first glance, but that assessment will need to be left to on-road testing.)

On Sensory and Autograph grades, the third-row seats are dropped manually but can be power-returned with a set of buttons in the cargo area, and those same grades also include a motion-activated power liftgate.

You’ll pay more for these improvements, but pricing is competitive and packaging is simpler


The base MSRP for the 2022 Infiniti QX60 is $54,995 before taxes and fees. That’s $6,000 more than the outgoing model’s starting price, but most people shopping in this segment will care more about the upgrades than the extra cost. It’s also worth noting that getting three rows from a Genesis GV80 costs at least $25,000 more. Pricing versus the Lexus RX L is similar, but the QX60’s more modern tech may make it a more desirable way to get into three rows of luxury at a middling price. 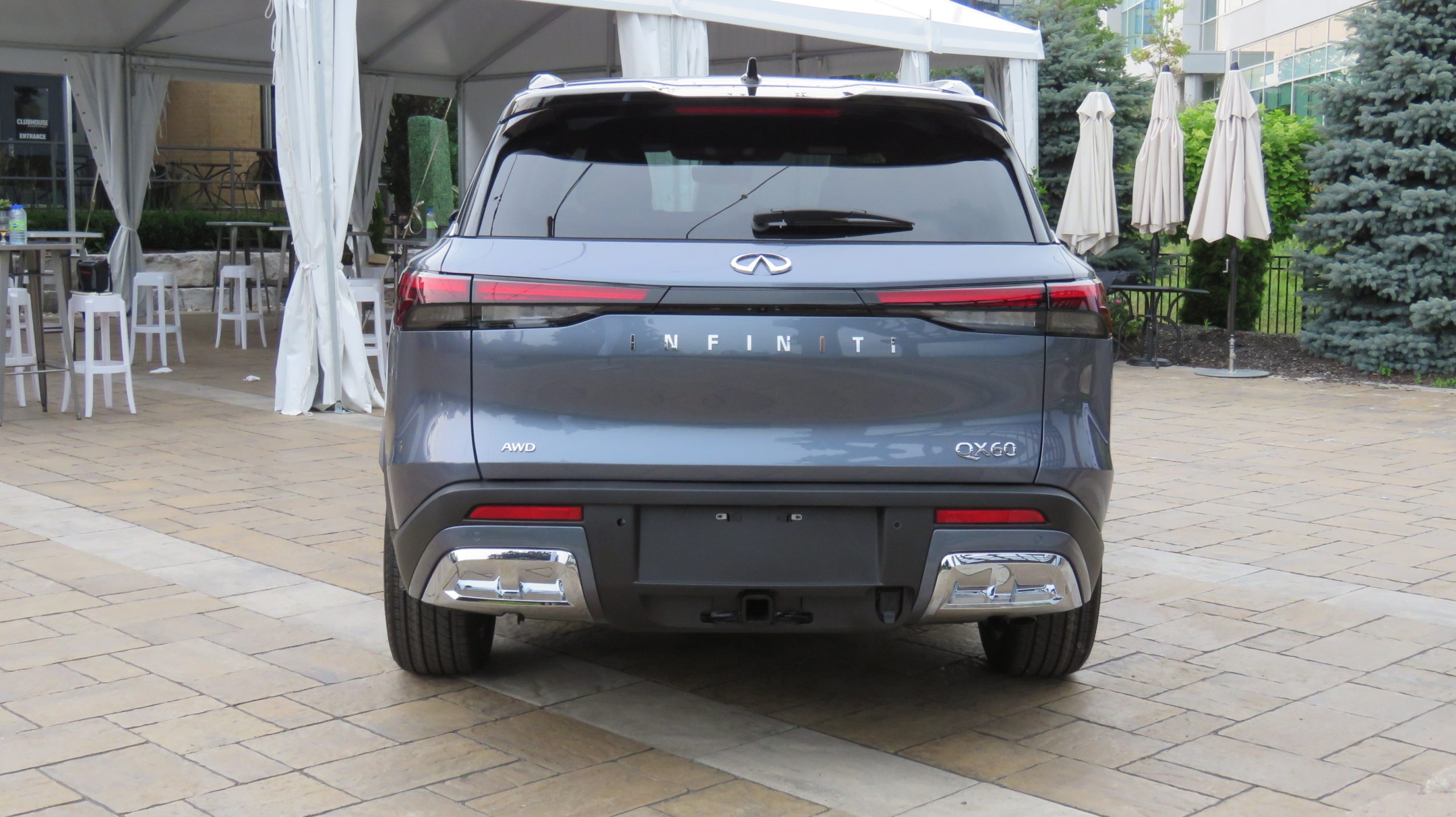 The QX60 is offered in four grade levels. On the entry-level Pure grade, 18-inch alloy wheels are included along with LED headlamps and taillamps, rear automatic braking and blind spot monitoring, and tri-zone automatic climate control, among other features. 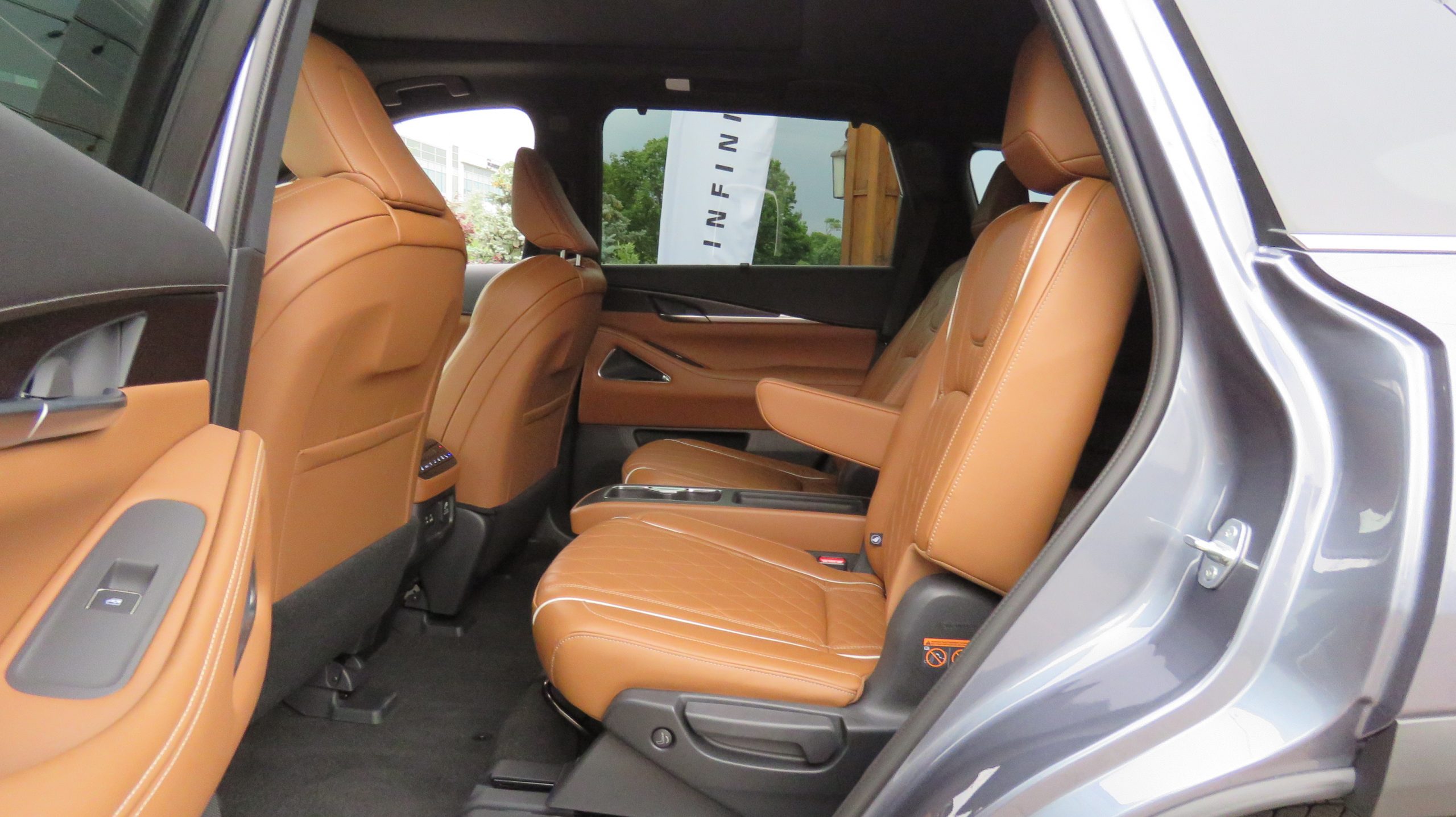 Pre-orders for the 2022 Infiniti QX60 are open now ahead of its arrival to Canada this fall.