Join the Conversation (0)
It was just three years ago when the fourth-generation Chevrolet Silverado was introduced, and already the brand is announcing a long list of updates for the 2022 model year.

From engine upgrades to revamped technology and a long-awaited, entirely new off-roading grade, just about every iteration of the Silverado is affected in some respect. Here’s a closer look at the highlights:


Following on the success of Chevrolet’s Colorado ZR2 mid-size truck, 2022 will see the full-size Silverado get the ZR2 treatment for the first time.

This new grade will become Chevrolet’s flagship off-roading truck. Fitted with the 6.2-litre V8 engine as standard equipment, which produces 420 horsepower and 460 lb-ft of torque while matched to a 10-speed automatic transmission, the Silverado ZR2 ships with the same Multimatic DSSV spool-valve dampers that make the Colorado ZR2 perform admirably in every application. 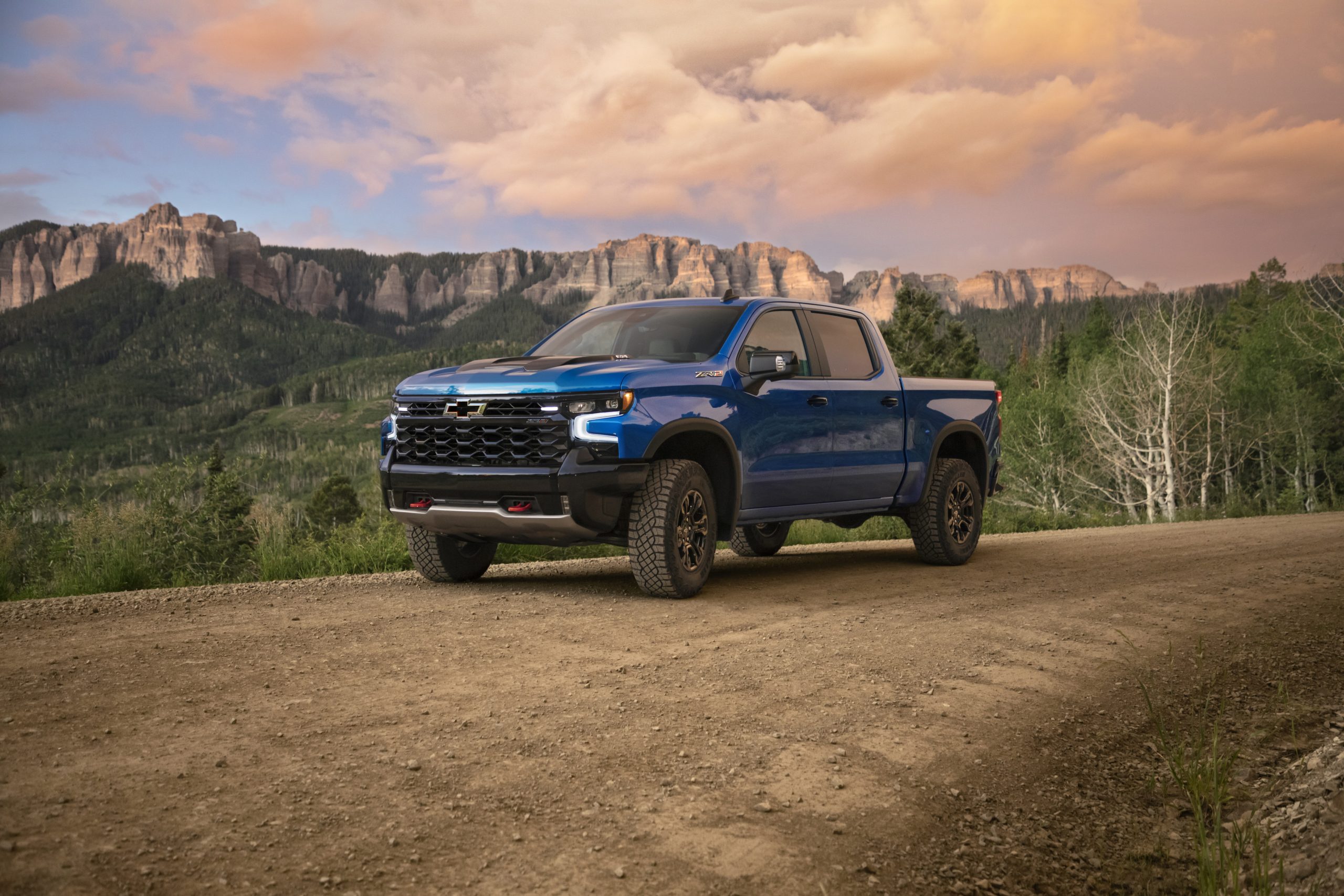 One interesting feature in the ZR2 is a Terrain drive mode accessible in 4-Low that enables one-pedal driving, applying the brakes and even bringing the truck to a stop when the driver releases the gas pedal.

Chevy says the ZR2’s payload and trailering capacities are similar to the other off-roading Silverado trucks at a maximum of 653 kilograms (1,440 pounds) and 4,036 kg (8,900 lb) respectively.

Why build this truck? Brand representatives say that between the Trail Boss, LT Trail Boss, and Z71, off-road trims make up roughly 60 percent of Silverado sales, and adding the even more capable ZR2 is just giving these owners more of what they want. 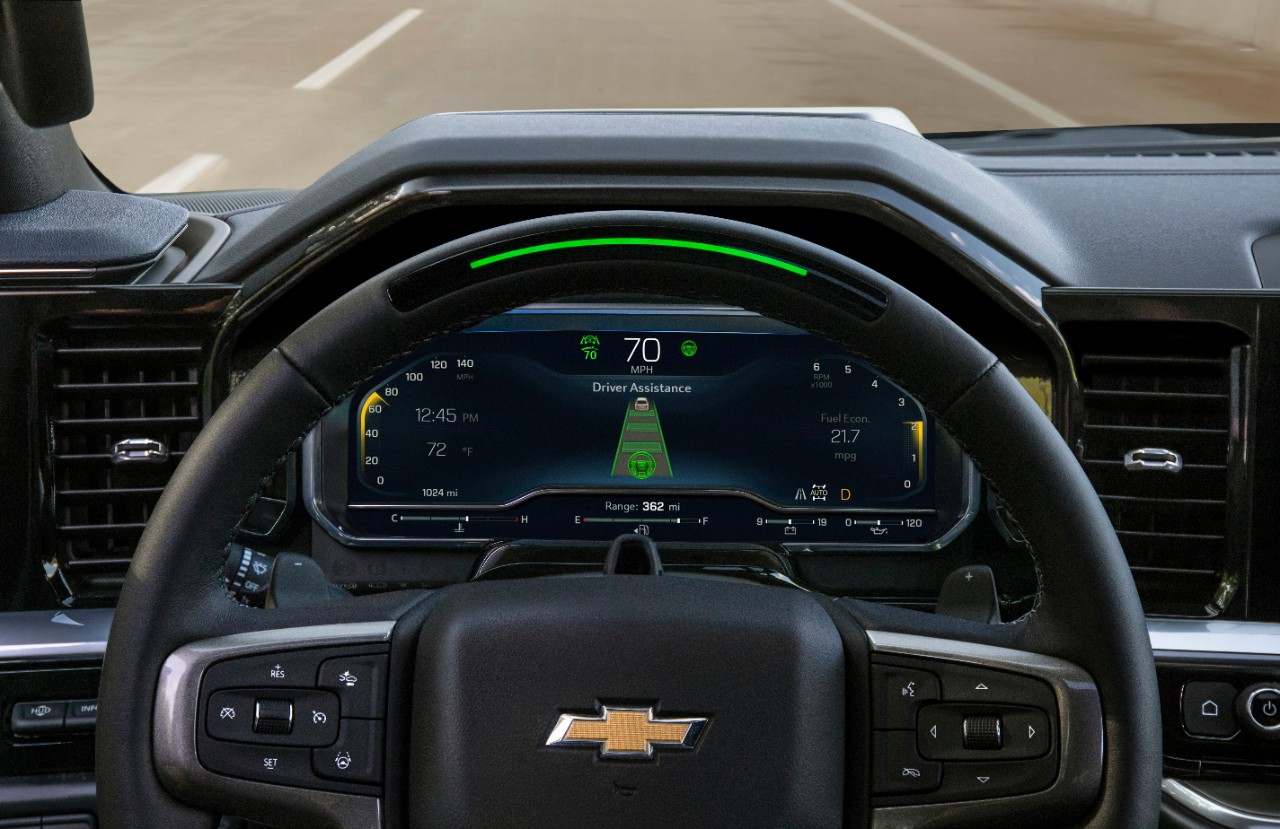 You’ll have to shell out to get this General Motors hands-free driving technology since Super Cruise is only available on the High Country trim as an extra-cost option. But this first-time offering for Silverado comes with a new feature: the ability to factor a trailer into its assisted lane changes using side blind zone alert, a technology that can also be purchased separately as part of the multi-view cameras feature. While Super Cruise is only offered on High Country for now, GM hasn’t ruled out offering it on other grades in response to future demand.


The Silverado’s base engine, a 2.7-litre turbocharged four-cylinder engine, gets an increase in torque output of more than 20 percent in 2022 for a total of 420 pound-feet. This figure is the highest for any base engine in the class, according to GM.

The increase in torque is made possible through a more rigid cylinder block casting, a 30 percent stiffer crankshaft, and some torque-handling durability techniques borrowed from GM’s turbodiesel engines. The eight-speed automatic transmission that accompanies this engine has been recalibrated for smoother shifting and quicker downshifts. With the upgrades, the engine maxes out at a tow rating of 4,354 kg (9,600 lb) in two-wheel drive configuration. (Four-wheel drive figures have not yet been provided.)


The 3.0-litre six-cylinder turbodiesel engine is now capable of towing up to 6,032 kilograms (13,300 pounds) in two-wheel drive configuration thanks to an updated suspension, a larger rear differential, and improved cooling for the powertrain.


An updated 13.4-inch-diagonal infotainment touchscreen is now standard on Silverado trucks from the LT trim and up. This upgraded system can accept over-the-air updates and also includes built-in Google functions that work alongside Apple CarPlay and Android Auto. Some of the development work for this project was performed at the General Motors Canadian Technical Centre in Markham, Ontario. 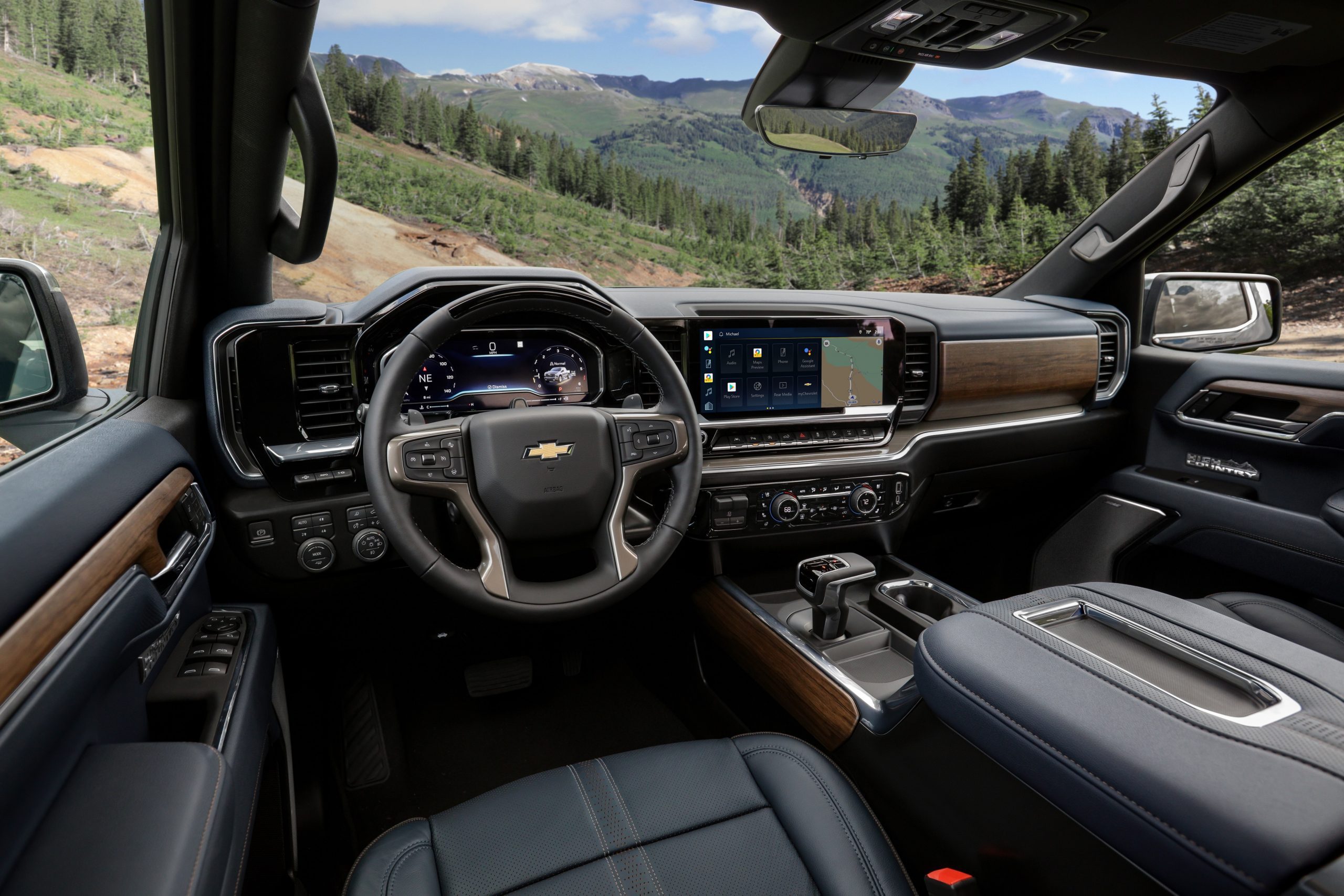 Other exterior and interior updates


Every Silverado will see a new front fascia and grille design for 2022, while LT grades and up will also get new daytime running lights that animate on walk-up, start-up, and departure. Redesigned fog lamps are also available. On LT and higher trims, a new interior is said by GM to give the cabin a more spacious and premium feel. Open-pore wood inserts are offered on the High Country trim along with two colourways, black or Nightshift Blue. Stainless steel speaker grilles accompany the Bose audio system, which comes standard on LTZ and High Country.

All 2022 Chevrolet Silverado models are due to arrive in Canadian dealerships next spring.