Breaking the sameness barrier to suit a variety of lifestyles.

Join the Conversation (1)
In an effort to continue to race toward their goal of electrification across 100 per cent of their line-up by 2025, and hybrid sales comprising 25 per cent of their global sales by 2025, Toyota is set to release two new hybrids later this year: one CUV, or the body style that is Toyota’s bread and butter these days and one minivan, a body style that was their bread and butter about a decade ago.

The Sienna minivan is set to head into its fourth generation with the arrival of the 2021 Sienna hybrid, while the Venza crossover – last seen in 2015 – gets a rebirth for 2021 but comes back a much more stylish and functional vehicle than it was previously. Both vehicles, meanwhile, will be available as hybrids and hybrids alone, across all three Sienna trims (Platinum, Limited, XSE) and all three Venza trims (LE, XLE, Limited). The Sienna, meanwhile, gets FWD and AWD options, while all Venza models come equipped with AWD.3


Looking little like any Sienna before it, the 4th generation 2021 model has nevertheless been styled to recall something else Japanese: the Shinkansen bullet train and its ultra-aggressive windshield rake and missile-like nose. The idea was to better walk the line between minivan (although, considering it’s as long as a RAM 1500 long bed pickup, it’s not really “mini” at all) and SUV, by adding a longer hood with two-piece grille and large flares over the wheels (that measure as big as 20 inches) that are especially pronounced over the rears. The taillights, meanwhile, recall the wraparound items seen on the Prius sedan, but are a little more handsome on the Sienna than they are on the smaller Prius. 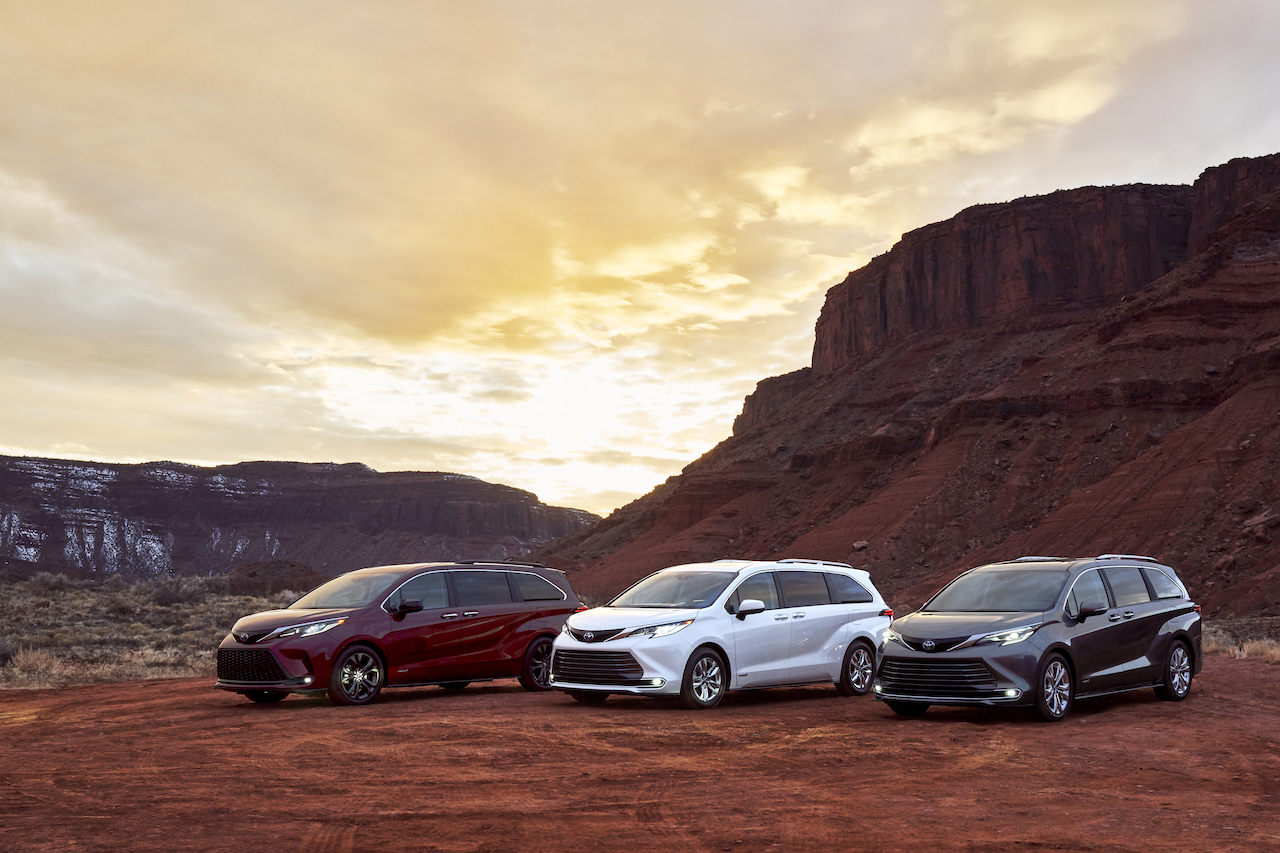 It may look somewhat out-of-the-ordinary, but no one will tell you that Toyota is bashful when it comes to designing their minivans; remember the Previa? No one thought its jellybean shape would ever work in North America, but it did. Oh, and it was available with AWD (well, 4WD, actually) as well.

While the styling is sure to turn heads, the powertrain is a clear indication that Toyota is taking the hybrid route, and not looking back. Making use of a 2.5L gas engine paired to two electric motors, it’s good for 243 horsepower and an estimated 7.1 L/100 km in combined driving. Indeed, there are plenty of hybrids that will score better fuel economy than that but few of them pack as much into the package as the Sienna does. Speaking of AWD, like the Volvo T8 models, the Sienna doesn’t get a driveline to the back wheels (meaning more cabin space); instead, one of the two EV motors power the back axle, with the ability to use 80 per cent of the available power and allowing for more interior space whilst doing so.

In addition to the clever AWD system, the Sienna now makes use of the TNGA-K platform, meaning a quieter drive experience and better on-road manners as TNGA-K focuses on tweaking, tweaking and tweaking the chassis just right so drivers get the best possible mix – according to Toyota – of good performance and comfort. Said platform has done wonders for the RAV4, Highlander and other smaller Toyotas so we’ll see how well it does when saddled with the added girth of the Sienna.


As mentioned before: it already makes a big footprint but that’s somewhat secondary to what else is on offer. There’s the requisite seating for seven or eight, sure, but how about a La-Z-Boy for your second row? Well, the Sienna’s aptly-named Super Long Slide (notice the capital letters) seats give you that, turning your mega-minivan into a veritable limo. Or, if you believe what Toyota was saying: a first-class airline seat. In keeping with that image is an on-board refrigerator and an on-board vacuum cleaner, a feature that Honda first introduced on their Odyssey and far as we know, a feature that even top-flight air carriers still don’t have. All of it is wrapped up in an all-new Platinum trim, making Toyota the latest manufacturer after the likes of Ford and Nissan to add a “Platinum” trim level. 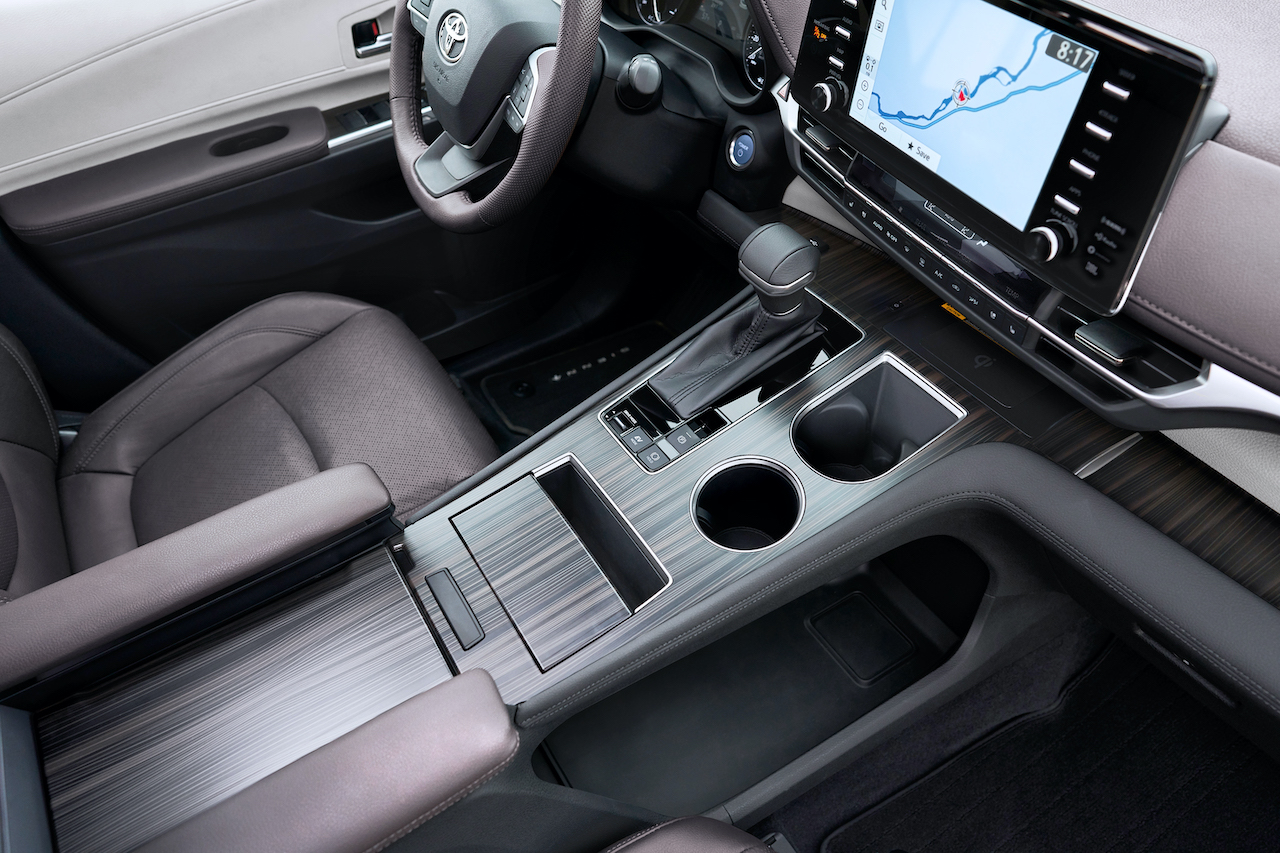 The hits just keep on coming: 18 cupholders, JBL hi-fi, quad-zone climate control, seven USB ports and a head-up display that’s bigger than a standard iPad. Oh, and because foot-activated tailgates are so, well, 2020, the Sienna gets foot-activated sliding doors. Now, you can open the door and keep both hands on the kid you’re about to load in while doing so.

While the second and third rows aren’t short on the coddling, Toyota hasn’t forgotten about front seat occupants. They get something called a “Bridge Console” that brings the center console high and level with the dash’s midpoint, so as to keep the shift lever and other storage bins located within easy reach of the driver. At the same time, the high console provides a massive space underneath said console to easily stow handbags and so forth. It’s a neat-looking set-up to be sure, and we’re keen on seeing how it works in-person. Will it do as Toyota says it will, or make it feel a little too snug? We shall soon see.

Drivers, in particular, will benefit from the standard fitment of Toyota Safety Sense 2.0 that adds a pre-collision system with pedestrian and bicycle detection, dynamic cruise control, lane departure alert and lane trace assist, and automatic high beams as well as 10 airbags.


If nothing else, the Sienna is nevertheless one heck of an unabashed take on the minivan, and it will no doubt be a head-turner once it arrives. Indeed, in addition to that overt styling, you have to think the Sienna will be a head-turner just by virtue of being part of a vehicle segment that you just don’t see as much of in showrooms today.


This vehicle, on the other hand, sits in a segment that continues to grow in popularity, that is to say the two-row mid-size CUV.

Ford, Honda, Nissan, Chevrolet and Hyundai have all recently shored up their two-row game, and it’s time for Toyota to follow suit.

Enter the Venza, which returns to the Toyota line-up looking sleeker, more refined and somewhat more chiseled than it had previously. The Venza’s front end was a tough pill to swallow in the first place and it hasn’t aged well, so the new car needed to be a breath of fresh air styling-wise. 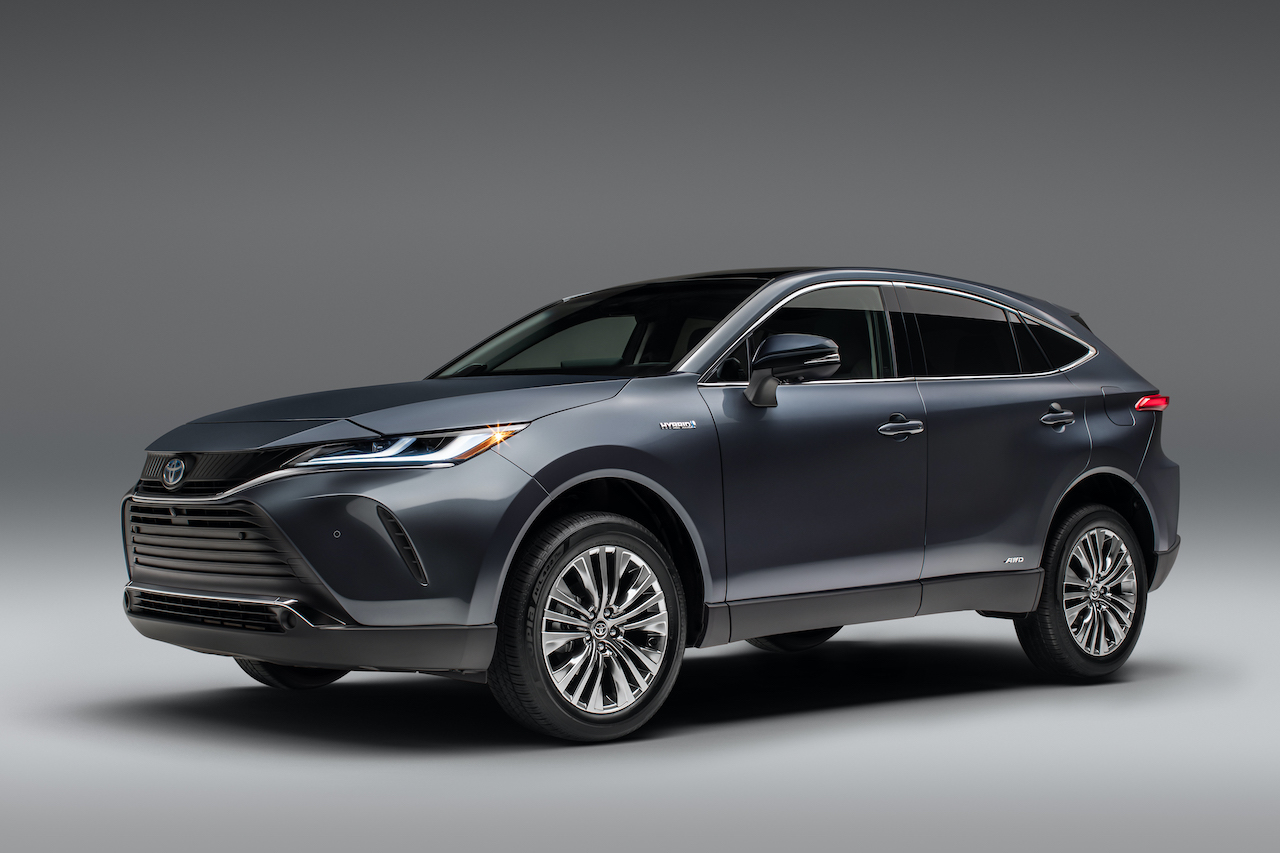 To wit: the old Venza’s somewhat gloppy panels and curves have been replaced by razor-sharp creases on both the front end and tailgate, while ultra-slim headlamp lenses and rear light bar complete a much more calculated design exercise. The hood stretches a good length beyond the sharply-raked windscreen (a stubby hood was yet another Venza stylistic bugaboo), helping give the impression of a station wagon on stilts as opposed to a squished Sequoia SUV.


The one thing that this latest Venza does share with the old model is a platform with the Toyota Camry, effectively making each one of these a Camry wagon, in a way. Which is no bad thing, if the new Venza has the walk to back up that talk.

It's not quite as space-aged inside as is the Sienna…but then, the Sienna is more like a passenger pod on wheels than a vehicle, really, so the dichotomy between the two is to be expected. Still, the Venza gets a nice, broad centre stack with a massive 12.3” touchscreen (optional, up from the standard 8”) display sitting atop and joins a 10” head-up display. Nifty mood lighting peppers the otherwise monochromatic interior which is classy in a black-tie affair sort of way. There will surely be less adventurous interior colour choices as you move down the line, but it looks modern inside the Venza and techy enough that it could give pause to younger families. We’re also looking forward to experiencing the “Star Gaze” moonroof that, with a press of a button, goes from transparent to frosted white.

They will likely also be fans of the available 1,200 watt, nine-speaker JBL audio system (six speakers are standard) that JBL designed in concert with Toyota to ensure the speaker shapes both fit the panels in which they sit but also best use their environs for sound amplification. Add a smartphone storage area large enough for the largest iPhones (as well as Apple CarPlay and Android Auto support)—as well as the quieter operation of the Venza’s TNGA-K platform—and the techies and audiophiles in the audience should be satisfied.

If not, maybe they’ll turn to the Safety Sense 2.0 tech that comes as standard on all trims, adding the same features it does to the Sienna.

Look for both the 2021 Toyota Sienna and Toyota Venza to arrive in showrooms later this year.