A new platform and a slew of improvements to Ford’s desert racer are sure to make a great truck even better.

A few years ago I drove a Raptor through dinosaur country on an adventure of discovery. The mission: get in touch with Alberta’s Mesozoic past by visiting its rugged badlands.

Somewhere between the watercolour landscape and the precariously balanced hoodoos, I fell in love with that beast of a truck. I couldn’t put my finger on exactly why; I mean it’s not the type of vehicle that gets me up in the morning. And this is a truck that’s probably never going to be used the way it was intended. So, who is it really for?

If you’ve never been behind the wheel of a Raptor, I can safely tell you, yes, it is as awesome as you think it is. You sit higher than most on the road, there’s a surplus of grunt, and you get the feeling that if you drove it off a cliff, you’d land shiny side up ready to do it again. You only ever use about 5 per cent of its capability at any one time so all that untapped potential is exciting, not unlike an exotic supercar.

And now there’s a new Raptor, and for this third generation, Ford has thrown everything they have at it. The timing couldn’t be better either with the recent release of the epically good Ram TRX. Ram also threw everything they had at their truck with the distinct advantage of being able to beat the crap out of a bunch of Ford Raptors and learn exactly where they failed.

The ball is in Ford’s court now and there’s an all-new F-150 to work with.

As you’d expect from a vehicle inspired by the trophy trucks of the Baja 1000, the Raptor’s frame has been reinforced and strengthened. A bespoke 5-link rear suspension is said to provide over 15-inches of suspension travel using 24-inch coil springs—the largest ever fitted to a light-duty truck. It allows for more traction and quicker starts of the line. The FOX live valve dampers are also all-new and more sophisticated and will handle even more abuse than before with larger 3.1-inch diameter shock bodies and damping rates that can vary 500 times a second. 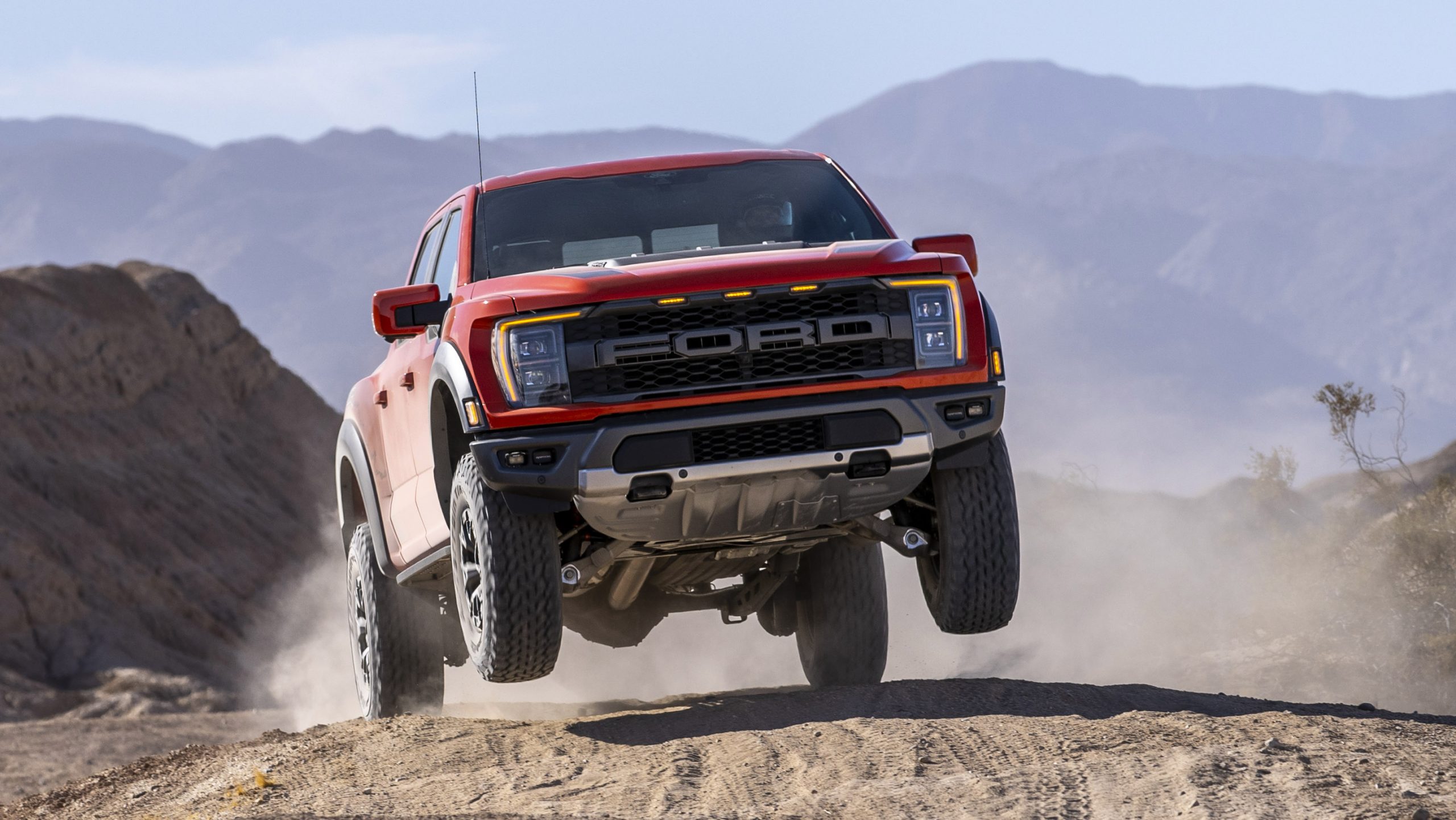 For the first time, you can get giant 37-inch tires from the factory, with three different wheels styles, two of which are beadlock capable. The 2021 Ford F-150 Raptor is also a full 6-inches wider to accommodate all that rubber and suspension.

You’ll have no problem spotting one either with its gigantic grille emblazoned with large “F-O-R-D” lettering, and the wider fenders and functional hood and side vents inspired by the intakes of the F-22 Raptor fighter jet.

The 3.5-litre twin-turbo Ecoboost V6 will carry over, but now in its third generation, it gets new turbos for better torque response and improved cooling to ensure your adventures are never cut short. It’s hooked up to an upgraded 10-speed automatic sending power to a new torque-on-demand transfer case. An electronic locking differential is standard on the rear axle, and a Torsen limited-slip unit will be available out front.

Ford said nothing about power. Considering that the last Raptor made 450 hp, at least 500 isn’t out of the question. They did mention that with its standard 39-gallon (148-litre) fuel tank it can travel 800 km between fill-ups, not something the TRX can brag about. It will sound better too with a new active-valve dual exhaust and configurable sound modes.

It’s not all brawn, as Ford has the advantage of a brand new platform to work with and all the tech that comes with it like over-the-air software updates and the supremely well-packaged cabin of the standard F-150 that will, of course, carry over here.

The Raptor will also get a standard 12-inch digital gauge cluster and 12-inch centre touchscreen and optional Recaro seats. An available 2-kilowatt onboard power system can run power tools or whatever equipment you bring along.

The 2021 Ford Raptor will be available in SuperCrew configuration on a 145-inch wheelbase and has an increased payload capacity of 1400 lbs. It will tow up to 8200 lbs dependent on selected options and equipment. The new 2021 F-150 Raptor will arrive on dealer lots by summer.

An even more extreme Raptor R will come next year, and there’s a supercharged V8 on Ford’s shelf that would put it neck and neck with the RAM TRX. We’ll keep our fingers crossed for that one.