OLED screens, a new audio partnership, and upgrades to Super Cruise are on deck

It only takes a quick glance to see that there are plenty of updates in the new fifth-generation Cadillac Escalade, but it also introduces improvements that go deeper than visual. The brand is using its flagship SUV to launch some technology upgrades that will filter from here through to the rest of the line-up.

Here’s a look at some of the highlights.

If you looked closely at the Cadillac Escala concept that began circulating at auto shows in 2016, then you’ve had a preview of several elements in the new Escalade such as certain materials and colour schemes. But the primary carry-over is in the infotainment system, which is nearly identical to that concept here in production thanks to the use of OLED technology.

OLED stands for organic light-emitting diode, and while it’s a technology that’s been around for some time in applications such as televisions and, more recently, mobile phones, its use in the Escalade’s infotainment screens is the first OLED application in a production vehicle.

The screens are 38 inches wide diagonally in total – 7.2 inches for the smaller screen to the left of the driver, 14.2 in the instrument cluster, and 16.9 on the right side – and are applied in a dramatic curved structure that wraps around the cockpit thanks the flexibility of the OLED’s thinner composition and ability to be applied with plastic rather than glass. Because OLED doesn’t require backlighting, it provides a true black against which the pixels, set at a density two times that of a 4K TV, can display colour at a much higher contrast than conventional LEDs. 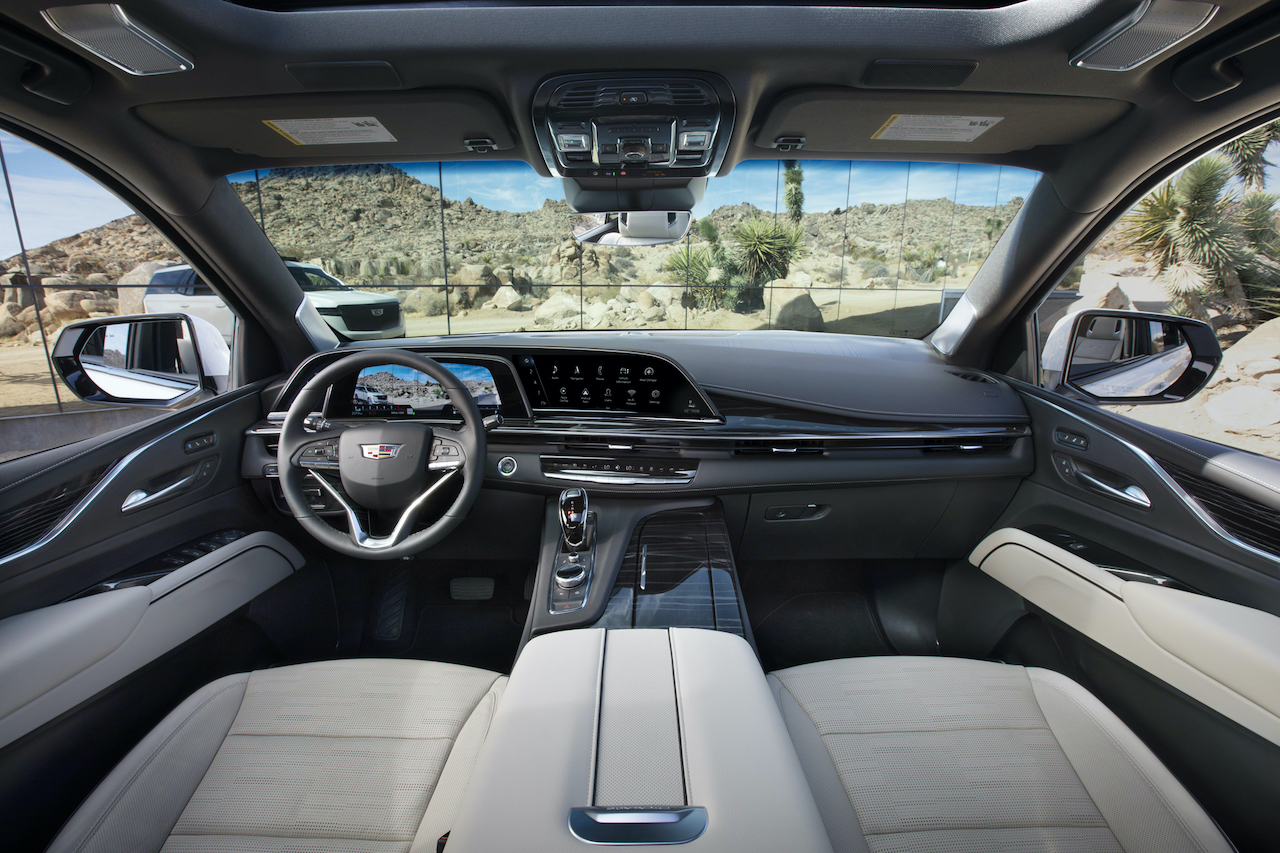 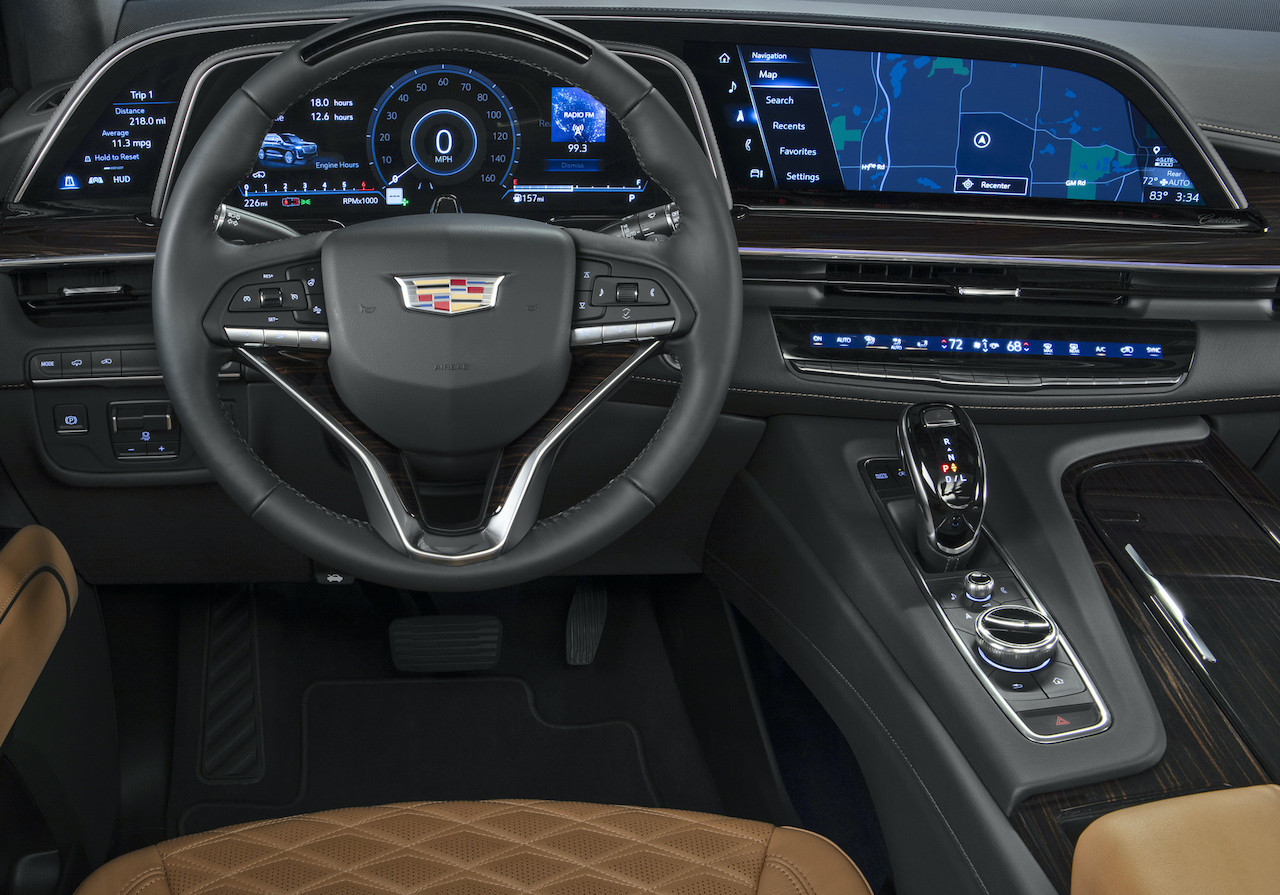 Menu functions can be selected either through touch or the on-board circular controller, which when activated switches the menu to a rotating layout to more closely mimic the dial’s movements.

The instrument cluster has a new display mode available: in addition to the existing gauge view, turn-by-turn navigation, and night vision modes, a fourth option shows navigation and route information on an augmented reality view generated from the forward camera.

And since the right side screen’s structure is so thin, Cadillac has added an illuminating logo to its reverse to serve as a walk-up welcome lighting feature, just because they could.

A rear-seat infotainment system is available – an interesting choice since more and more passengers prefer to use their own devices and many manufacturers are therefore no longer developing them. The two screens, mounted on the back of the front-row seats, operate independently and can accept input via USB, an HDMI connection, Apple TV, Chromecast, and Amazon Fire Stick. A navigation feature lets passengers know how long is left in the journey and allows them to input new destinations for the driver’s approval. Media can be shared between the two rear screens with a left or right swipe, and controls are available from the front row to lock out controls, set whether audio goes through headphones or the car’s audio system, and turn the screens on and off.

In conjunction with the launch of the Escalade, Cadillac announces an exclusive audio system partnership with AKG, a Grammy award-winning acoustics company.

The entry-level audio system includes 19 speakers, including three in each A-pillar, two in the D-pillars, a subwoofer, and a pair of independently amplified speakers integrated into each of the front row headrests. 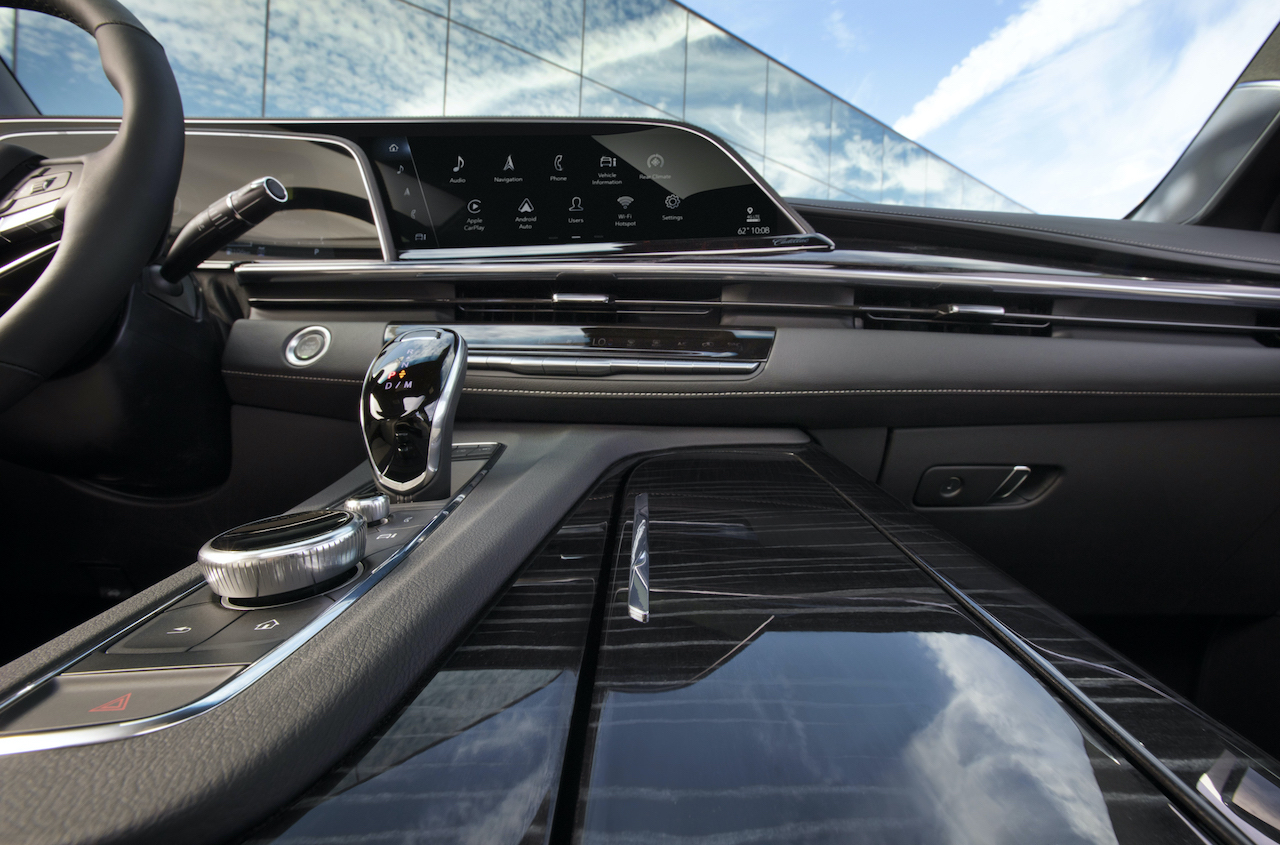 A premium 36-speaker system is available – standard in Platinum models and available in Premium Luxury and Sport – that adds, among others, four speakers built in the headliner surrounding the first and second rows. Through the infotainment system, the focal point and degree of surround sound can be adjusted to provide optimal listening conditions to either the first or second row, and independent volume levels can be set for the driver and front passenger.

Both systems use input from the vehicle’s speed and internal microphones to assess the noise levels in the cabin and use countering frequencies to reduce exterior noise and improve the listening experience.

Escalade launches as the first SUV in the Cadillac line-up to be available with Super Cruise, a feature that until now was only available on the CT6 large sedan.

The enhanced version of Super Cruise that will ship with the Escalade includes a new lane change functionality. When the driver activates the indicator while Super Cruise is engaged, the system will check the adjacent lane to ensure it’s clear and then execute the maneuver automatically. This addition will also be available in CT4 and CT5 sedans with Super Cruise equipped when they launch later this year. 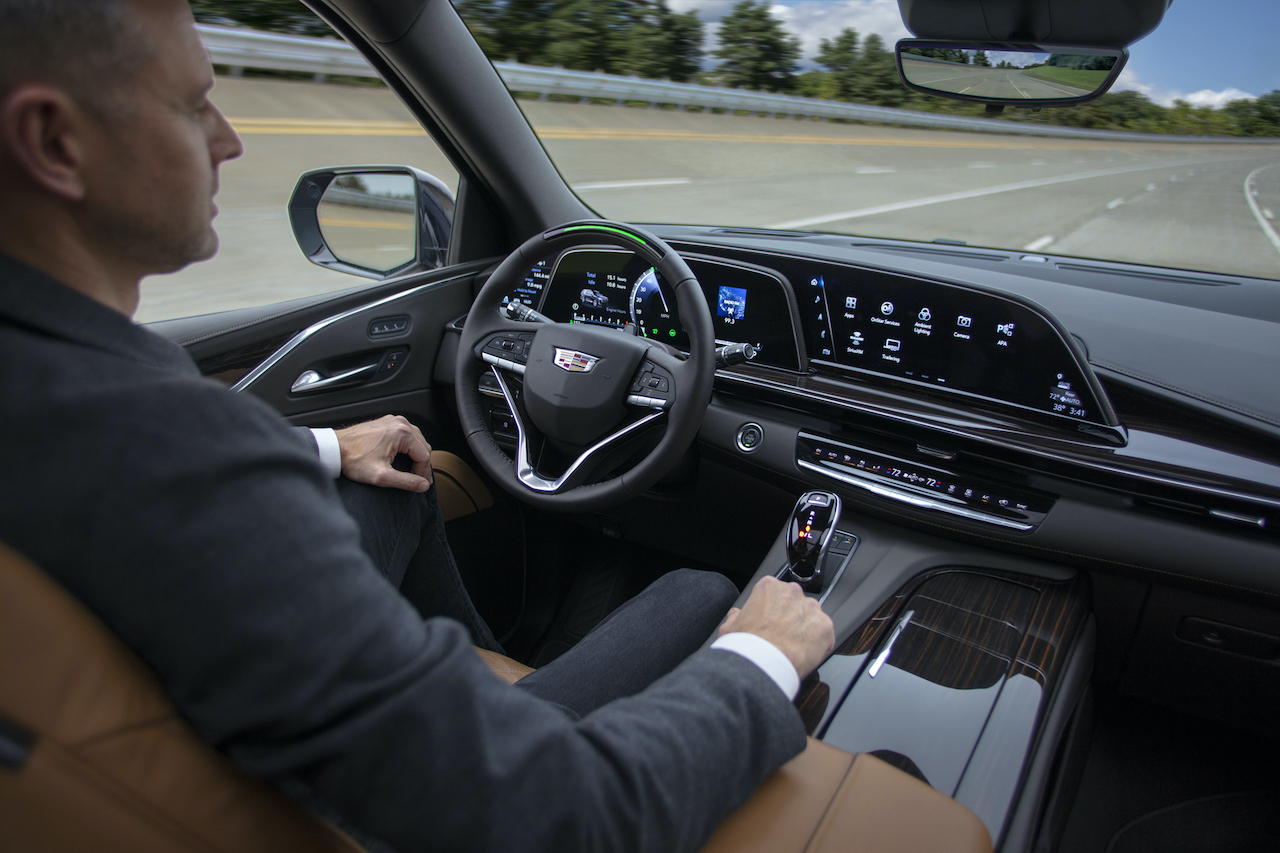 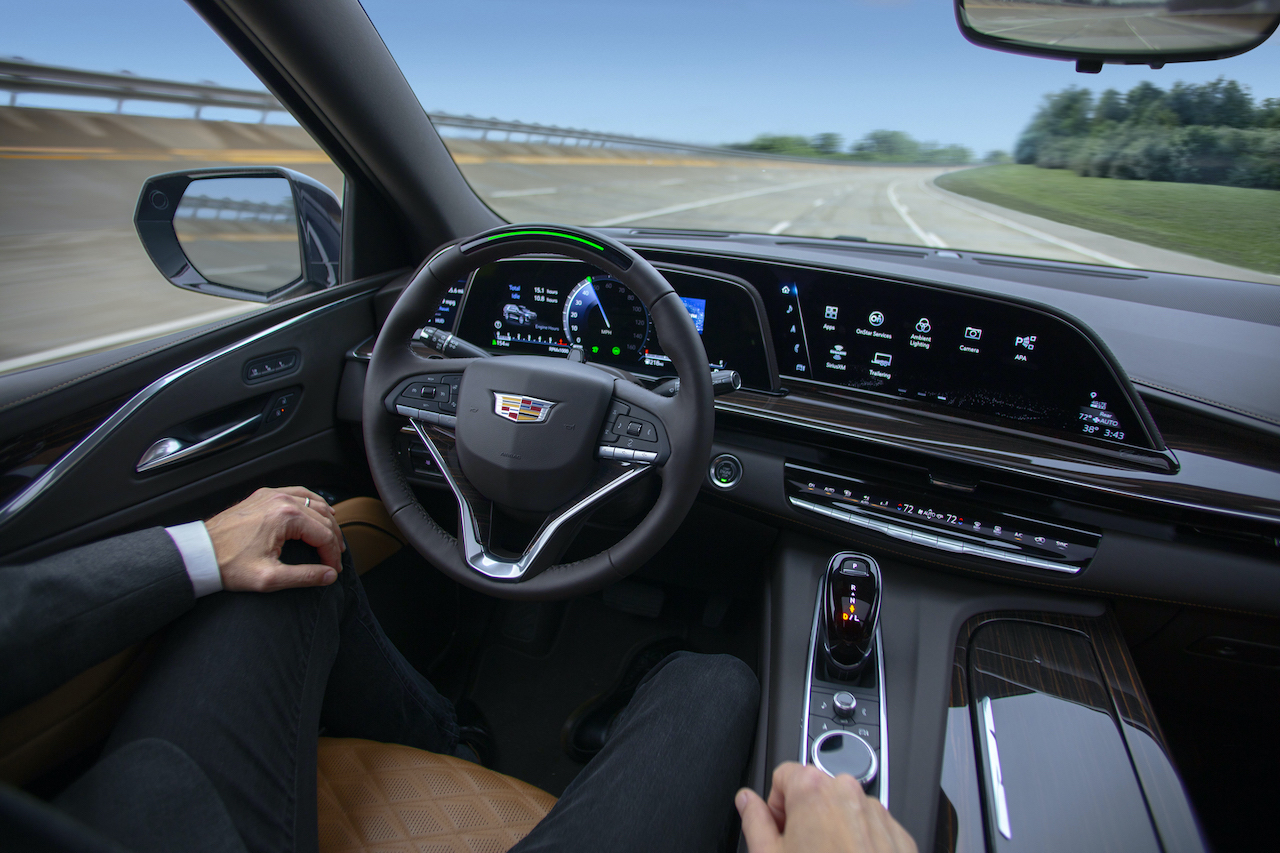 Cadillac’s development team listened to customer feedback to change how the system responds to being activated when it’s not fully ready to take over. Previously, the system would not engage at all until the car was fully within the conditions required for Super Cruise operation. Now, when the vehicle is on a compatible highway, the driver can press the button to engage the system. If conditions are not yet correct for it to fully take over – because the car is in the middle of a curve or not centred in the lane, for example – it will activate but remain in blue mode until it’s ready to engage, at which point it will change to green mode and the driver can take his or her hands off the wheel.

However, as many steps closer to autonomous operation as this sounds, this enhanced Super Cruise system still requires that the driver’s full attention remains on the road.

The version of Super Cruise to be applied in the Escalade also benefits from the system updates pushed in the second half of 2019, which nearly doubled the number of Super Cruise compatible highways across Canada and made it possible to use the system on all but 41 km of the Trans-Canada Highway between Vancouver and Halifax.