Brand New 2019 Subaru Ascent gets Wrecked, Right Before our Eyes

Watching a side impact crash test, at a place called the Insurance Institute for Highway Safety

Two weeks ago now, give or take a day, we were driving through the countryside in the State of Virginia, between the city of Charlottesville and Dulles International Airport.

The scenery was out of a Gary Cooper movie. Friendly Persuasion, I think. It was, in a word, gorgeous.

An hour or so before, we’d been at a place called the Insurance Institute for Highway Safety in Arlington, where we’d watched as a brand new 2019 Subaru Ascent SUV, all spit-‘n-polished-up, had been wrecked in a side impact crash test.

So we had the scenery to talk about, or the crash, but neither was top of mind because everybody was hungry and where could we get lunch?

In the end, we settled on a chain chicken-sandwich restaurant called Chick-fil-A, which is famous for a) waffle fries, b) leading the U.S. fast-food industry in average sales per restaurant and, c) never being open on Sunday. We don’t have Chick-fil-A’s in Canada yet (2019, they say), so that was another attraction.

Once we got eating (the waffle fries, in particular, were very good, thank you), we talked about the test.

The Insurance Institute for Highway Safety — IIHS from now on — is tasked with saving the insurance industry money. Yes, the research they conduct is critical, as far as making cars safer for you and me to drive is concerned, but the less money the industry has to pay out for claims, the better.

Fully funded by insurers, the IIHS’s research focus is aimed at reducing injuries and property damage in crashes. It has four ratings — Good, Acceptable, Marginal and Poor — in five categories of crashworthiness — front, side, roof and so-on — for every vehicle sold in North America. It also rates crash-avoidance technology, headlights and child-seat anchors and ease of use.

If you want to check out see how your daily driver stacks up, or investigate a vehicle you’re thinking of purchasing, just go to the IIHS website and find out. The automobile industry likes this intervention because being awarded either a Top Safety Pick or a Top Safety Pick-Plus sends a message to consumers that automakers, particularly automakers like Subaru, are serious about safety. 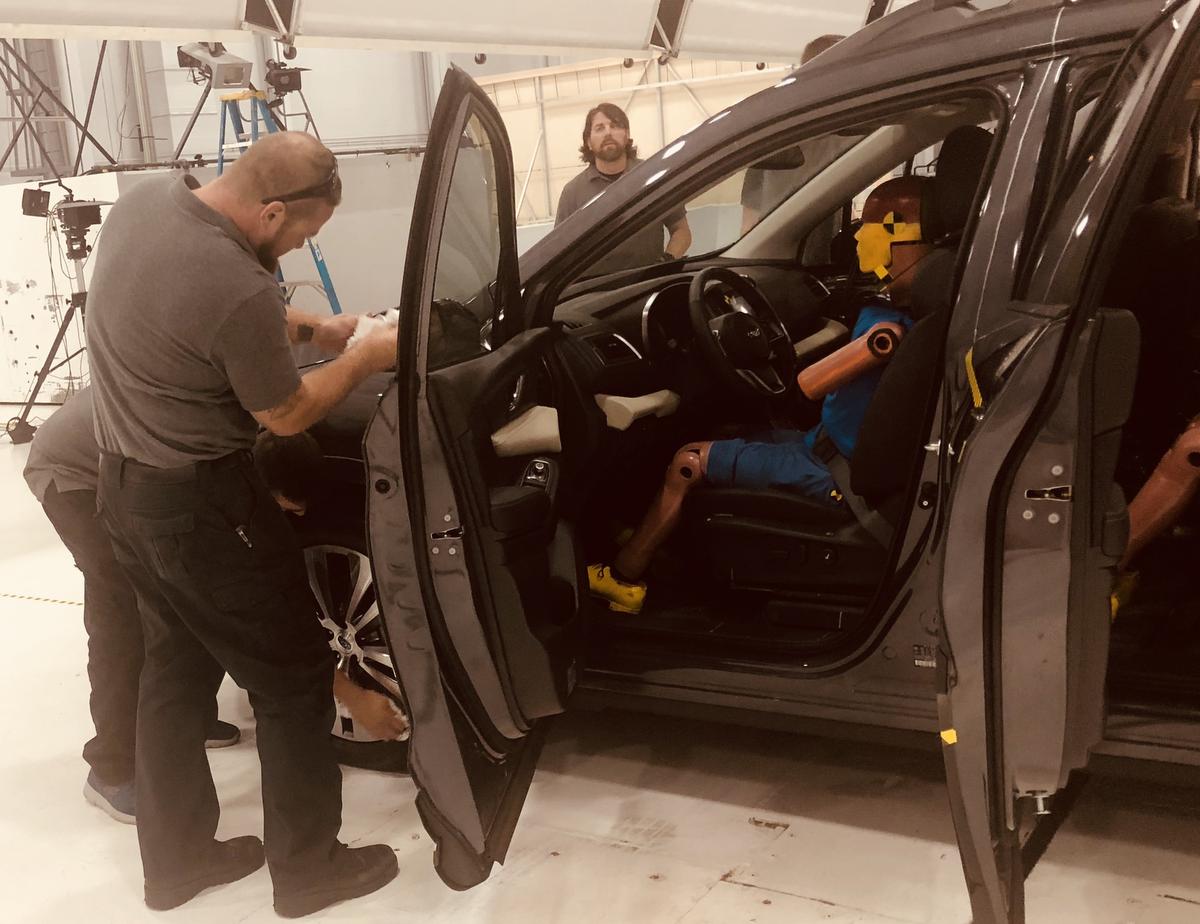 That cars are getting safer generally, let there be no doubt. The IIHS was 50 years old in 2009 and to mark the occasion, it crashed a 1959 Chevrolet Bel Air almost head-on (40 per cent off centre) into a 2009 Chevrolet Malibu at 65 kilometres an hour (40 mph).

There was no real surprise; the Bel Air folded up like a cheap card table. With no seatbelts or airbags, the crash test dummy along for the ride recorded forces that would probably have been fatal if it was a real person. The crumpled Bel Air is on display in the lobby of the IIHS, as is the Malibu (whose dummy survived the impact). I love 1950s cars, but they really were dangerous.

The 2019 Subaru Ascent, on the other hand, appeared to stand up remarkably well when we watched it get hammered by a 1,500-kilogram sled going 50 km/h (31.069 mph). There are photos illustrating this test in print and online and you can watch a video of it happening at thestar.com/autos. But the side-impact test was intended to simulate what would happen if you were sitting still and somehow got broadsided by another SUV.

I was surprised that the Ascent didn’t appear to be more badly damaged; I wasn’t sitting in it, however, so I have no idea how forceful the collision would have felt like from the inside. And I wouldn’t want to guess: official results won’t be available till later this month. Meantime, here’s some more about the Ascent and the IIHS. What I found out about size mattering may surprise you. Trust me.

Evan Lindsey is the Car Line Manager, Product Planning, for Subaru Canada and he was the guy who told us, in so many words, that Subaru’s goal is to be No. 1 across the board in everything but if there’s to be one thing that stands out above all else, it’s the brand’s commitment to safety. Since January 2015, for instance, Subaru has been awarded five Top Safety Picks and 17 Top Safety Pick-Plus awards from the IIHS.

Lindsay said the key focus of Subaru’s safety philosophy going forward is not only occupant protection in the event of a collision, but to prevent a collision from happening in the first place. Subaru’s “Eyesight” driver-assist system, for instance, is like a second pair of eyes watching out for you and helping you to avoid danger.

“The safest crash is one that doesn’t happen,” he said, adding that the challenge is to minimize the risk of injury if there is a crash. To this end, the 2019 Ascent is designed to ensure the safety of passengers sitting in any seat but with an added focus of protecting third-row occupants in the event of a collision.

One thing that caught my eye on the Ascent is the breakaway drivetrain. Translation: in the event of a head-on collision, the engine and transmission, already mounted low in the frame, are directed downward and then will break away from the vehicle and drop to the ground instead of being pushed back into the passenger cabin.

I suggest this unique breakaway drivetrain is a perfect illustration of just how serious Subaru is about safety. 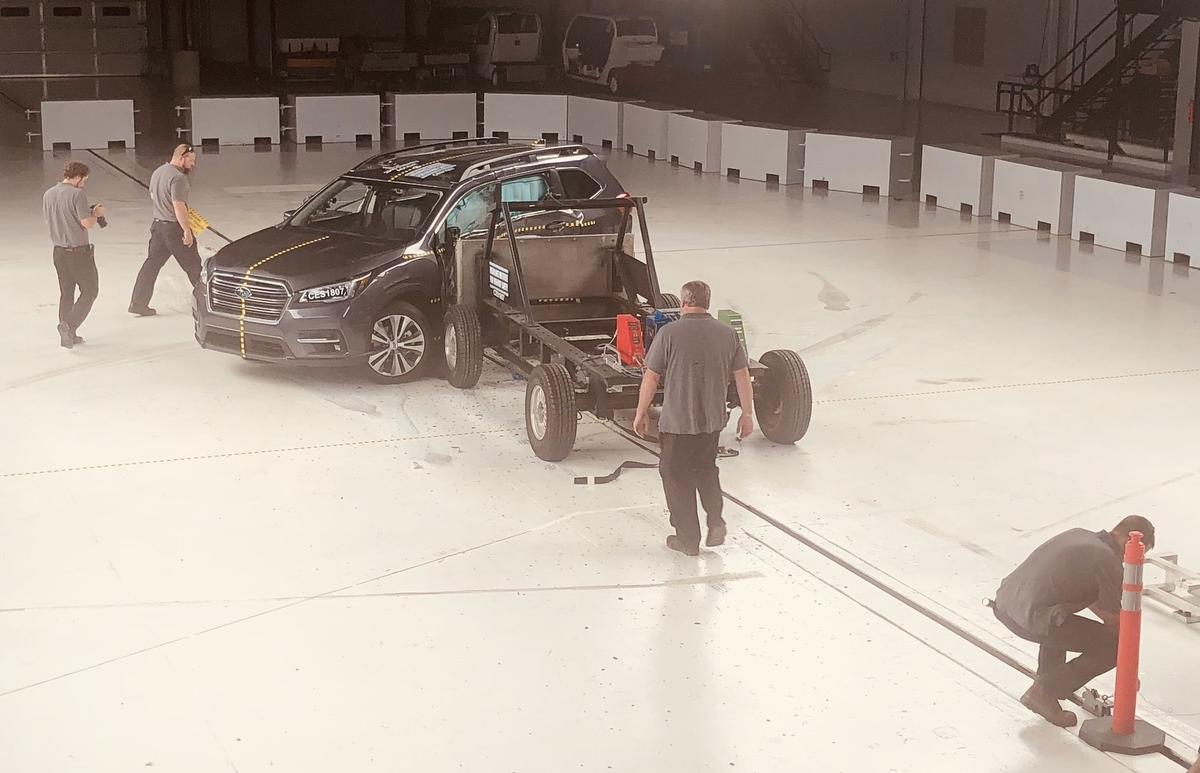 Results from the crash-testing of this 2019 Subaru Ascent won’t be known for several weeks.

Now, I — and others along on this trip — had a fascinating conversation with Becky Mueller, a senior research engineer at the IIHS, about the side-impact test we’d witnessed as well as other tests being conducted at the facility.

For instance — and I promised you this information earlier — SUVs like the Ascent now have some of the lowest fatality rates out there while small cars, such as the Smart, are vulnerable.

“You don’t do well in a small car,” she said. “It’s physics. If you`re in a small car, everybody on the road is bigger than you, including the road barriers and the trees on the side of the road. We typically don`t recommend smaller than a mid-size car.

“We understand that there are reasons why people buy mini and micro cars — the cost to purchase, the price of fuel, and so-on. But we have numbers that show small cars have the highest death rates. We like to make people aware that even if you buy a car that has the highest level of safety features, you’re still one of the smallest things on the road.”

Mueller said that although the numbers are improving, 50 per cent of the people killed on U.S. roads each year aren’t wearing their seatbelts.

“I believe the belt-use total is above 80 per cent now,” she said, “but there’s still a big problem. In a crash — a rollover — you can be ejected. You can crash forward into the steering wheel. People find this hard to believe but if the crash is violent enough, you can be sucked into the back seat.

“The best thing you can do, regardless of the rating of the car you’re riding in, is wearing your seatbelt. Airbags are very important but they can’t do their job if you’re not wearing your seat belt.”

We all get a kick out of watching videos of car-crash tests where dummies are used to determine the damage that might be done to humans. I think a popular-music group once called itself the Crash Test Dummies. What I didn’t realize was how long it takes to develop one — somewhere between 20 and 30 years.

“It’s not just making the dummy,” she said. “It’s the challenge of making sure it can withstand crash after crash after crash and not break. If you put a human in a car crash, they’re going to be broken. Put a dummy in there and over time it won’t break and it has sensors that tell us what a human would experience in the same crash.

“So we need all of that data. We have to know exactly when a human bone breaks, when a tendon snaps, and that stuff requires academia getting involved, cadaver testing, volunteer testing. We can’t just go around injuring people.

“So it’s a long process; sometimes it takes 10 years to collect enough data about injuries and then relate them back to dummies. Then we have to compare tests between dummies and cadavers and dummies and volunteers. We do not use cadavers here at IIHS; other places that do this type of work do, though.

“So when you sign up to give your body to science, you might wind up in a car crash.”

The engineer said, however, that not all of the dummies are representative of today’s real world. Americans weigh more than they did, and that has to be taken into consideration. Some are obese and people are living longer than they did years ago.

“They’ve just finished developing an obese dummy and an elderly dummy. But those were developed just two years ago so we need the injury data before we can use them in tests. Age is becoming a real factor. We have all the baby boomers who don’t want to give up their independence; they’re out on the road and they are doing things. They are active. They are not going to sit around and knit a sweater.

“So we’re going to need to protect them in crashes. It’s exciting, but it’s a long process.”

It’s that long process that has accelerated Subaru’s research and action. Take the safety features described above, add the preventive safety, the active and passive safety and the primary safety systems that are at the core of Subaru’s DNA, and you can see that this is one manufacturer not content to wait for a third party test to tell it that it’s doing good.

That sort of recognition is nice, but it’s also expected when you put as much time and effort into it as Subaru does.

I was thinking about all that as I finished my Chick-fil-A meal. As I ate my last fry, it struck me: Subaru sure doesn’t “waffle” on safety. That might sound corny, but it’s true. 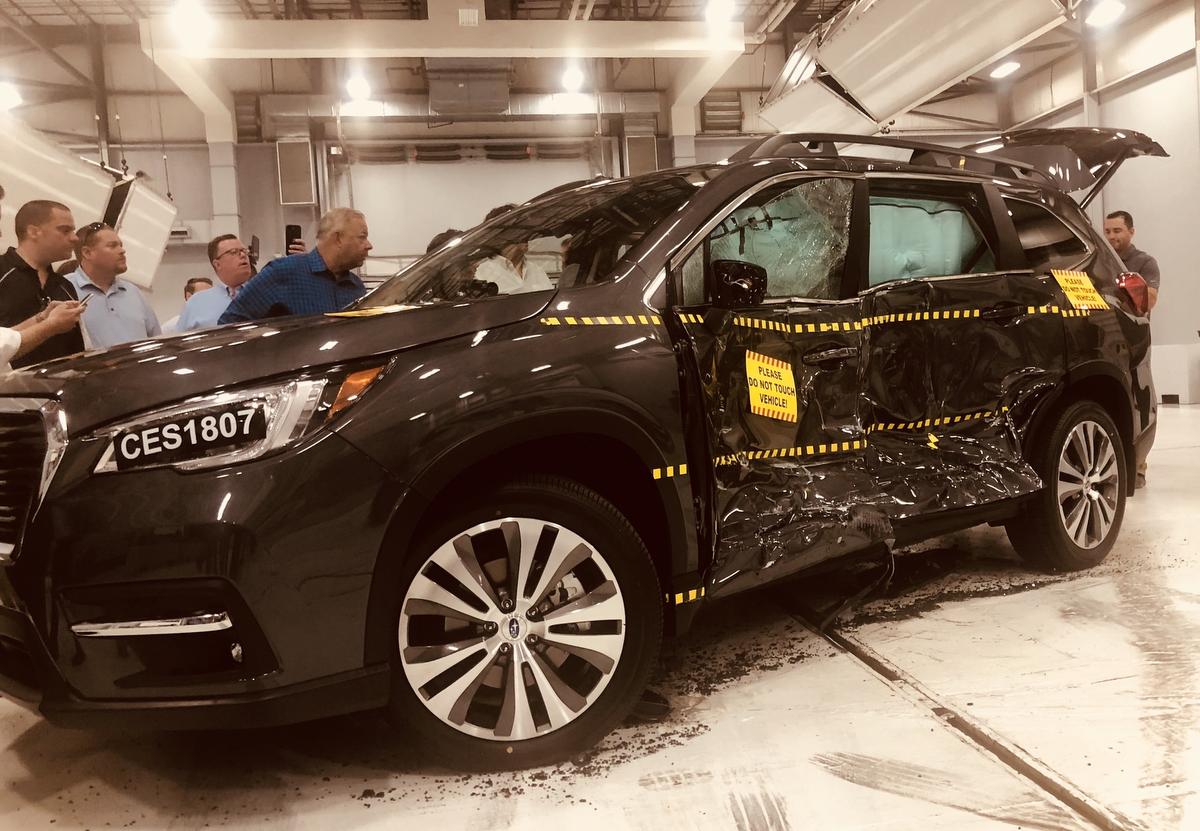 Technicians rush to prepare the Subaru for post-test examination after it was hit by a 1,500-pound sled going 50 km/h.