The 2019 RAV4 Adventure will be called Trail in Canada when it arrives in showrooms at the end of 2018.

NEW YORK, NY: Toyota’s best-selling vehicle the RAV4 is getting an aggressive facelift.

All RAV4 models will be built in Toyota’s Cambridge assembly plant in Ontario.

During a sneak peek for media, Toyota officials showed a number of changes to the fifth-generation RAV4 including a rearview camera that can be viewed through the rearview mirror with the flick of a switch.

The camera can also be toggled left and right to give the driver the best view of traffic behind them.

Toyota officials said they listened to drivers when redesigning the RAV4 and noted the camera helps see traffic behind the vehicle when someone is sitting in the rear middle seat.

The 2019 RAV4 will have three trims. The Limited and Trail models (the Trail will be called Adventure in the U.S.) and will feature a 2.5-litre, four-cylinder engine mated to an eight-speed automatic transmission. The gasoline models will be available this winter.

The third trim, the XSE Hybrid model, will feature a 2.5=litre four-cylinder Toyota Hybrid System. The hybrid XSE is expected to be in dealer showrooms early 2019.

At the unveiling, Toyota outlined a number of safety features noting the RAV4 will come standard with the second generation of Toyota Safety Sense which includes: pre-collision system with pedestrian detection in day or nighttime and a new daytime cyclist detection system that will alert the driver with audible and visual warnings; dynamic radar cruise control; lane departure alert which can, in some circumstances, detect the edge of the road when no lane markers are visible; automatic high beams and eight airbags. 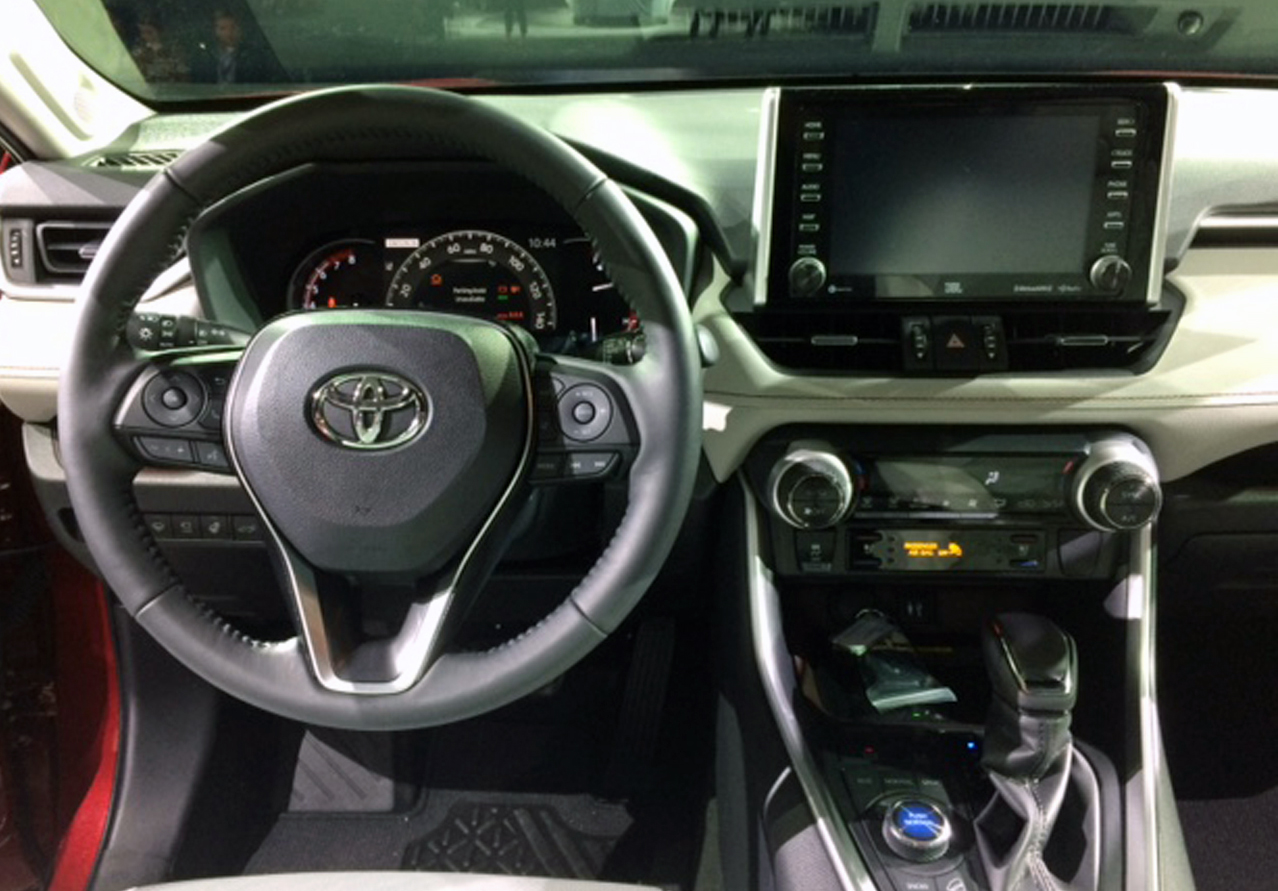 Inside, Toyota says it has created more room for passengers and cargo while adding a number of new features such as an in-dash tray within arm’s reach of front passengers.

The back seats offer more cabin room as well as legroom while the rear cargo area can handle whatever a family can throw in it.

The RAV4 comes with a seven-inch touchscreen perched above the centre stack, an eight-inch screen is an option, while online families will be happy to hear the vehicle can be had with up to five USB ports between the front and rear rows.

One of the first things you will notice about the new RAV4 is that the side view mirrors have been moved to the doors which, according to Toyota, allows a better forward view.

Another change drivers will notice is the introduction of a Dynamic Torque Vectoring All-Wheel Drive system which sends 50 per cent of engine torque to the rear wheels, or distributes the torque to the left or rear wheels, which improves handling. When all-wheel drive isn’t needed, Toyota says the RAV4 will provide better fuel economy than it ever has. Toyota said fuel economy will be provided at a later date.

On the hybrid model, Toyota said the new RAV4 will have enhanced power and acceleration.

Toyota said pricing will be provided at a later date.

It’s safe to say the RAV4 has gone from a passive-looking SUV to one that now features a more aggressive stance.

It should attract younger buyers and keep RAV4 at the head of the Toyota class. 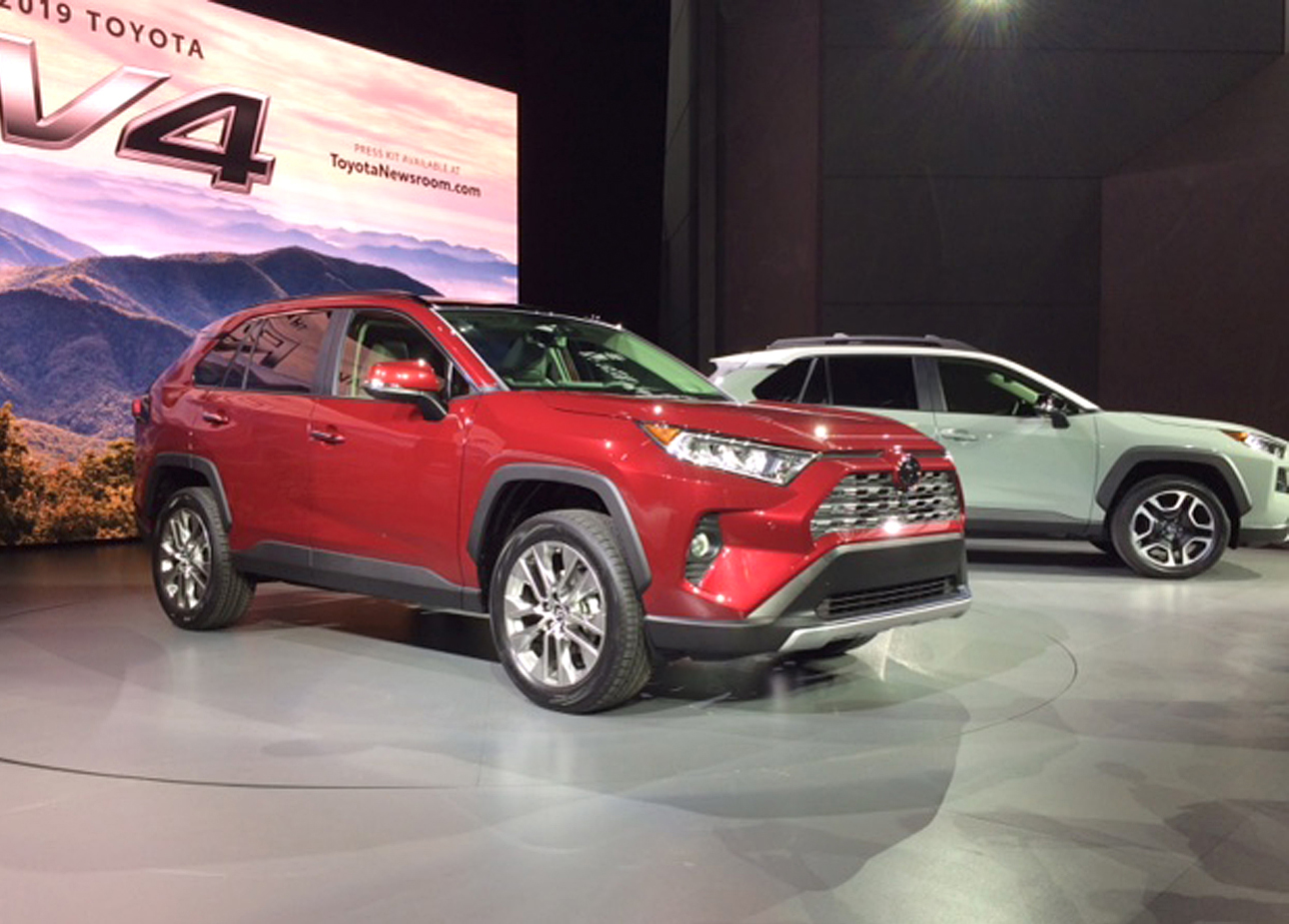