If you take a gander at my author archive here on Wheels.ca, you might notice that my stories over the years have largely been focused on sports cars and motorsports. The last couple of years have brought a lot of changes, one of which has seen me evolve into somewhat of a truck specialist. It isn’t that my passion for things that go fast has diminished in any way, but as my own business has evolved, I have been spending an inordinate amount of time towing trailers laden with catering gear to motoring events across Ontario and Quebec.

Wife and I had the opportunity to take part in an incredible driving event at the legendary Circuit Mont Tremblant in the Laurentians. We would be living in a stunning new 8 bedroom chalet at the base of the Mont Tremblant ski resort, providing the hospitality for a group of hungry track day enthusiasts. It is a truly unique concept where participants drive up to ski country, stay in a couple of incredible houses just a few minutes away from the track, and enjoy fantastic food both at “home” and at the track.

Catering an event of this size, a six hour drive from home, means that we essentially needed to bring an entire kitchen with us complete with BBQ, griddle and stove. To haul this mountain of stuff, we needed a real workhorse, but also wanted a truck which would be comfortable for the long trip and the  2018 Toyota Tundra Platinum edition fit the bill perfectly.

Regular Wheels readers may recall our recent road trip from southern Ontario to the Ottawa area. The first leg of our trip followed that same route, making the obligatory stop in the tiny railway town of Havelock to grab a photo of the Tundra and the U-Haul trailer in front of the old caboose.

The heavily laden Tundra ticked along with no complaints as we rolled through Ottawa and crossed over into Gatineau, Quebec, snickering at the giant pigeons and equally super sized soup can on display at the side of the road.

We wound our way through downtown Gatineau, with the rather clunky U-Haul trailer clanging and banging over the roughshod surface that passes for pavement, as we headed towards Highway 50 leading in the direction of Montebello. We were racing the impending dusk and the inherent appearance of wildlife that comes with it, so there was no time to explore the town, just a quick splash of fuel before turning north for the final leg of the drive to Mont Tremblant.

As the time of day that photographers call the golden hour appeared, the beauty of Route 323 was enhanced by the sun setting over the Laurentian mountains and myriad lakes and streams. While not exactly a driver’s road, the scenery is stunning.

Our home for the first and last nights of the trip was a lovely resort called Chateau Beauvallon, just outside the mountain village. The seventy room hotel has a cosier, more personal feel than any of the corporate giants in the ski village, with the added benefit of being more affordable by far than. A ground floor one bedroom, king suite, right next to the huge outdoor hot tub was just $137 a night during our mid-week stay during the shoulder season. Yes, some automotive journalists actually pay for their own lodging.

The next three nights would be spent entertaining in the spectacular new Havre des Légendes chalets. These chalets are of the no expense spared, best place you’ve ever stayed variety. Absolutely the perfect venue for entertaining weary high performance driving enthusiasts.

Don’t get me wrong, I’m not saying rich guys. Sure, some of the crowd fit that model, but for every off the rack 911, there was an E30 or one of several generations of Corvette. Don’t get me wrong, none of this is cheap, but while cars costing well into the six figure range are well represented, many of the group are hard working Joes who see this as a well earned vacation.

If you listen to old racers talk about racing back in the day, they will often say they raced at St. Jovite, not Mont Tremblant. Mont Tremblant is actually a tiny village in between the two entrances to the track. A funny thing has happened to the region over the years, as today it is known as Mont Tremblant, likely due to the growth of the ski resort. If you look at google maps, St. Jovite does not show up on the map when you search for Mont Tremblant and yet it does if you search for St. Jovite, despite it being a substantial town. While odd, it might not be a bad thing, as St. Jovite has a very different flavour than the money driven ski village.

Winding down after three busy days, we took some time to explore the area a little.

Mont Tremblant is Iron man country and that means the constant presence of lycra clad cyclists on the roads. Unlike some urban settings, cyclists are well behaved and every driver seems to be ultra aware of them. Even though 80 km/h speed limits are the norm on rural routes, one gets the feeling that this is a safe haven for cyclists.

St. Jovite is a quaint little town with abundant shops and marvellous eateries, many featuring patios for people and bike watching. Two wheeled culture is alive and well in Quebec ski country and with it comes an odd juxtaposition of style.

The patios of St Jovite are full of aging men that while fit, look awkward at best walking around with their man bits on display next to some unsuspecting tourist’s delightful selection of charcuterie.

At the other end of the spectrum are the similarly aged Harley riders. Rich old guys who have raided the merch racks of their favourite Harley dealer to outfit themselves with the latest in torn muscle shirts, jeans, belt buckles and other assorted swag as they live out their own well heeled visions of Easy Rider version 2018. A friend who owns a Harley shops says “we love those guys. All we need to do is tell them they look cool in it and they flash the plastic.”

Then, there are the wives who have begrudgingly taken up the culture, riding their own bike, often three wheelers, to appease the hubby. One poor girl tried three times to engage reverse on her trike to back into the curb, Sons of Anarchy style, before giving up and going around the block and finding a spot she could pull in to forwards.

Before anyone accuses me of anything sexist here, I know lots of ladies who are talented riders with a passion for bikes and I love them for it. The dozen or so ladies I saw from the patio of the wonderful Restaurant Antipasto, situated in the town’s historic train station, were clearly in over their heads in some attempt to stay relevant. I was embarrassed for them. A little.

Our trip finished with a quick visit to the town of Montebello, home to the Land Rover Experience, where guests can stay at a Fairmont resort and learn why the ritzy brand has such a killer reputation for being off road machines.

On this trip however, our visit was more about fromage. Specifically, we dragged our mobile catering rig to Fromagerie Montebello to procure some of their house made delights. $40 later, we had three cheeses in the cooler and were on our way. If you are like me and enjoy the stinky cheese, their Rebellion 1837 is by far the winner!

From Montebello, we made our way west along Route 148 which follows the north shore of the Ottawa River to Gatineau rather than taking the speedier path along 50. The road itself is rather plain, but the views across the river are far more interesting than a major highway and the occasional appearance of small towns with the inevitable front lawn shrines to Baby Jesus’ Mom are entertaining.

While a pickup truck is far from the ideal vehicle for exploring driving roads, of which there are many in this area, we were on a specific mission and were loaded for bear as the old saying goes. The Tundra fulfilled its duty, keeping driver and passenger in complete comfort the entire time. The truck’s neatest feature has to be the full size rear window which not only adds awesome air flow to the cabin, but also garners attention from passersby who are used to the old school sliding rear window, so commonly known as an SRW in used vehicle classifieds.

Whenever you head out on a road trip, by all means, use the super highway to get close to your destination, but then, be sure to get off the beaten path. Slow down and take in the local experience. Visit shops and restaurants along the way. You never know, you might just find your new favourite place. 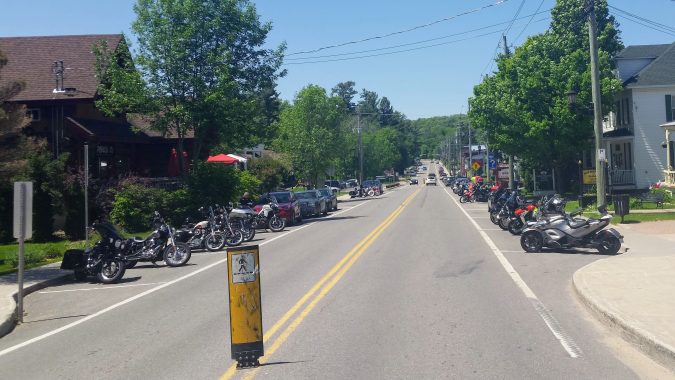 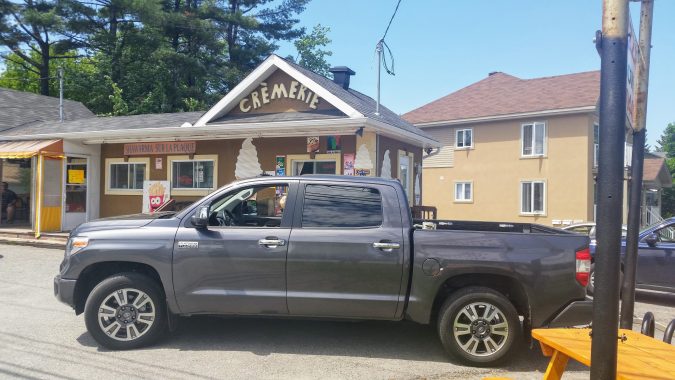 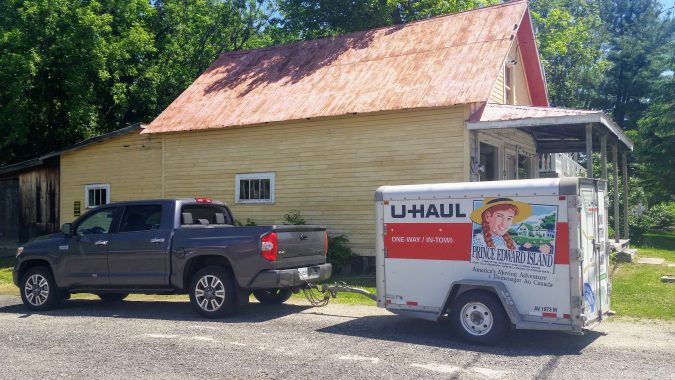 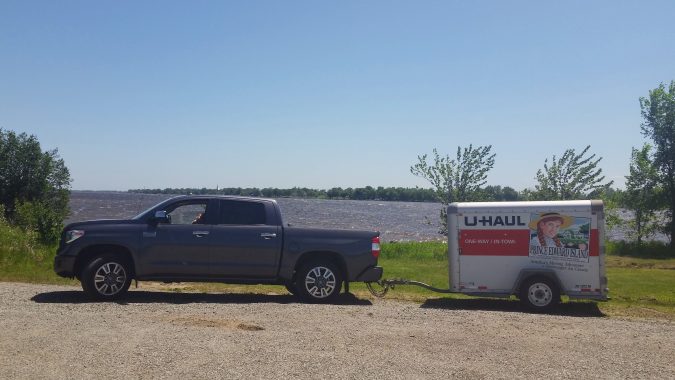