You go to the New York International Auto Show and you bump into some very interesting people.

Ms. Goulding is a British pop star who’s had a string of hits that would knock your eye out. One of the biggest is “Love Me Like You Do,” which she sang via live streaming to an international audience a week ago Tuesday, just before Jaguar Land Rover Ltd. pulled the cover off the 2018 Range Rover Velar, which it was introducing in the Big Apple.

This entertainer, who sang at the wedding of Prince William and Kate Middleton, went on stage with three backup singers and a musician who played guitar and keyboards and set the mood early by serving up the Alicia Keys anthem “New York.” Her choice of songs was most appropriate — she said so herself — considering the unveiling of the automobile was taking place at one of the city’s most famous landmarks, the Lincoln Center.

But you’re there for the auto show, not a concert, so you tear yourself away from the singer and the songs and turn around, only to discover, standing right next to you, and looking like a million bucks, is none other than your hero, Roger Penske.

You see this guy everywhere there are cars, not just at speedways. If you go to the Detroit Auto Show and Mercedes-Benz throws a reception, you see Penske. If you go to Los Angeles and Toyota is unveiling something, he’s there. You go to New York and Jaguar Land Rover is entertaining, and there’s Roger. 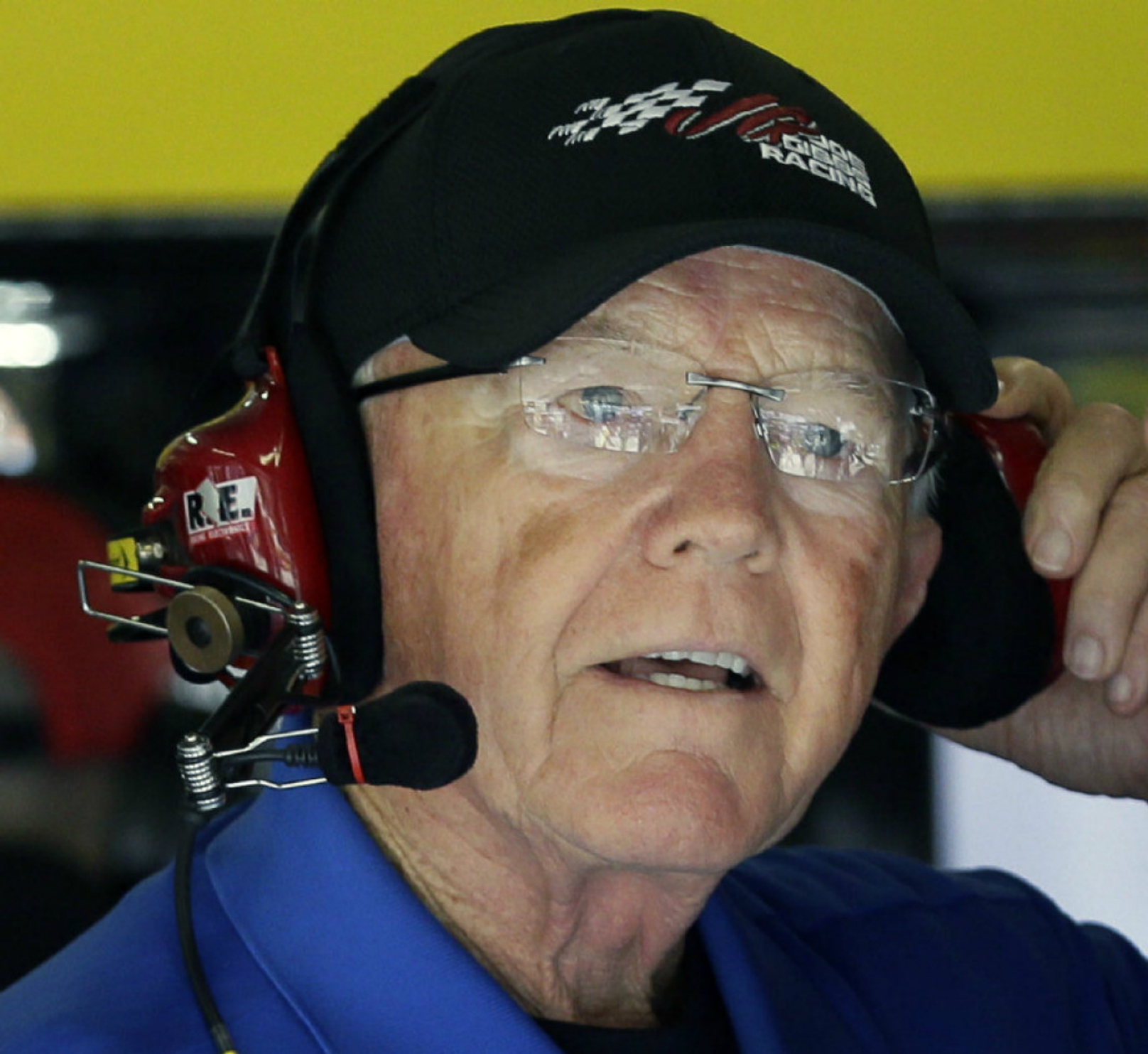 Famous for his Indy and NASCAR racing teams, his Penske Automotive Group includes dealerships selling literally every brand on the planet, including every manufacturer I’ve already mentioned. He started with Chevrolet in Pennsylvania in 1965 and went from there. The group now includes 326 dealerships representing 39 brands, a huge truck leasing company and a bunch of repair centres. Naturally, I had to ask him about the good old days when he raced sports cars himself.

“I hear Ron Fellows has done some good things with Mosport (now Canadian Tire Motorsport Park,” he said. “I used to enjoy racing there in the early ’60s. Won a few. The last time we raced there as a team was in 2007 with the (Porsche RS) Spyder, and two of our guys, Romain Dumas and Timo Bernhard, won the ALMS (American Le Mans Series) race. I hope to get back there before long, just to see how they’ve improved it.”

I asked him about his relationship with young Peter Ryan, an American-born Canadian racer from Mont Tremblant, Que., who was on his way to a career in Formula One when he lost his life in a Formula Junior racing accident in France in 1962. 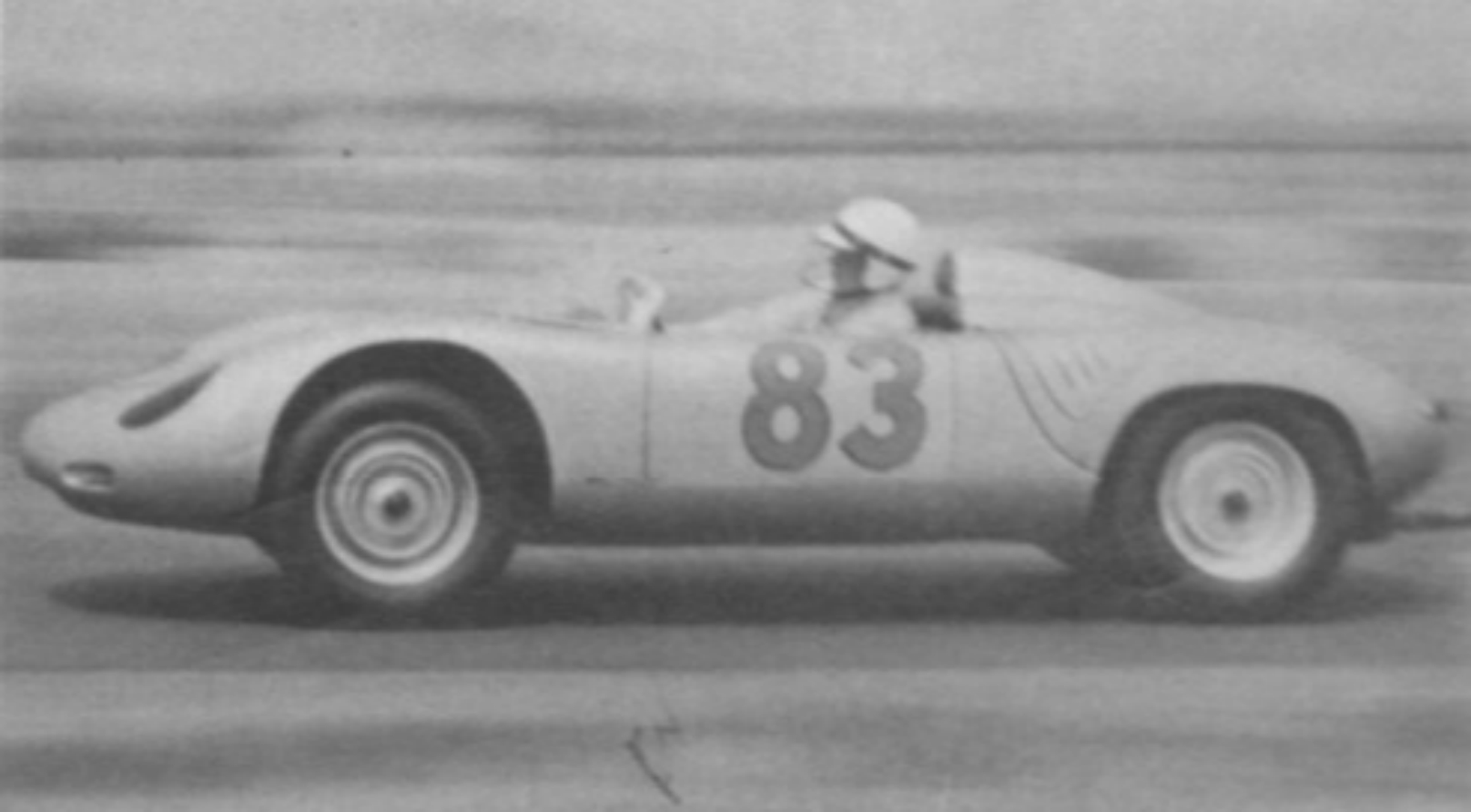 “Peter and I raced together,” he said. “In fact, we won a race, the Sundown Grand Prix, at Harewood Acres in 1960. It was very sad when he passed away. I don’t think he had time to adequately establish a reputation in international competition. He was good enough to be Canadian champion, that’s for sure, but I can’t say if he could have been a world champion.”

I didn’t get a chance to ask for details, but Penske and Ryan are responsible for one of sports car racing’s most enduring stories, a yarn that perfectly illustrates how “the Captain” of industry, Penske, could also be one of the boys, if circumstances permitted.

It seems that at the 1961 sports car race at the Laguna Seca circuit near San Francisco, brewery heir Augie Pabst had a bad day and didn’t make a lap. Everybody was at a motel party later, and Penske and Ryan — for reasons known only to them — each offered Pabst $100 if he would drive his rental Mustang into the swimming pool, which was a tight fit because the car had to go between a fence and the diving board. He was successful, however, undoubtedly aided by a copious quantity of his family’s Blue Ribbon brew as well as the 200 bucks.

Penske once told journalist Gordon Kirby that the next year, when they went back to check into their rooms, there was a tire in the pool with a sign that said, “No Parking.” Said Penske to Kirby: “You can’t do stuff like that any more.”

I’d wanted to ask him whose idea it was to offer bribe money to Pabst, Ryan’s or his, but Penske is one of those fellows in constant demand and he’d been whisked away before I could get the words out. Maybe next time.

Now, as I was at the New York show as a guest of Jaguar Land Rover (or “JLR,” as it’s called in conversation), I had occasion to talk to a couple of their executives and had a great chat with one in particular, David Larsen, who’s the company’s North America Product Planning Manager. 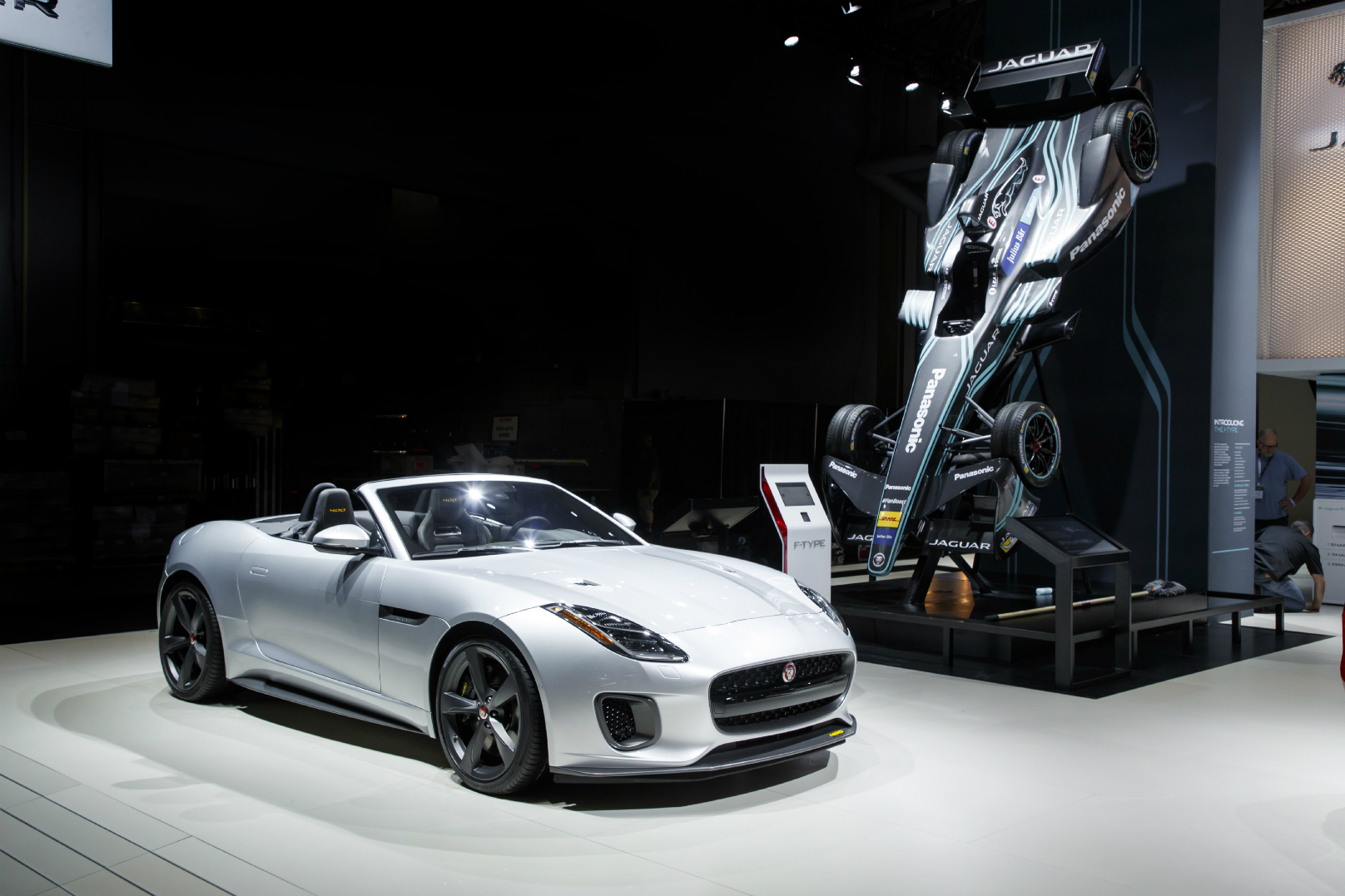 I’d met Larsen at the L.A. show last November. We’d talked then about the all-electric iPace concept car they’d introduced, and it was great to bump into him again at the Jacob K. Javits Convention Center, where the N.Y. show was taking place. Naturally, I had to ask him about the Velar and why the company thinks it’s so special.

OK, remember: this is an interview being conducted in New York with an American who’s talking in U.S. dollars. So, don’t go shopping for a Range Rover in Toronto quoting these figures. The intervals are the same, however, as are the price differences once the exchange is factored in.

“Not only does the Velar fill that space from a size point of view between Evoque and Range Rover, but also from a price point. It’s actually an inch taller than Evoque but it’s two inches smaller than a Range Rover Sport. So, it’s considerably longer, slightly taller, has beautiful styling and we price it at $49,900 — right in the middle.

One of my favourite topics when I get talking to people in positions of responsibility is the rush toward electrification. As I explain to them all — the environmental arguments aside — I can understand Europe going electric because of suspicion born from “Dieselgate” and the fact that oil and gasoline, both of which have to be imported, cost a fortune. In North America and Canada, in particular, we are more accepting of Diesel as fuel and we have oil in the ground and it doesn’t cost that much to fill up with gas. So, why the push to go electric on this side of the Atlantic?

Larsen answered by acknowledging that there is much uncertainty in the industry about which direction to go but that compliance (with government-mandated fuel-mileage targets) is a major factor.

“We’re going to answer that (compliance) with battery electric vehicles,” he said. “That is the only way (all) manufacturers will be able to meet the U.S. targets (for fleet average). So by 2020, 50 per cent of our models will have some form of electrification. In Land Rover, we will be introducing a plug-in hybrid. That is in the near future. On the Jaguar side, we’re going to introduce the iPace, which is a full-battery electric vehicle. That will come next summer. 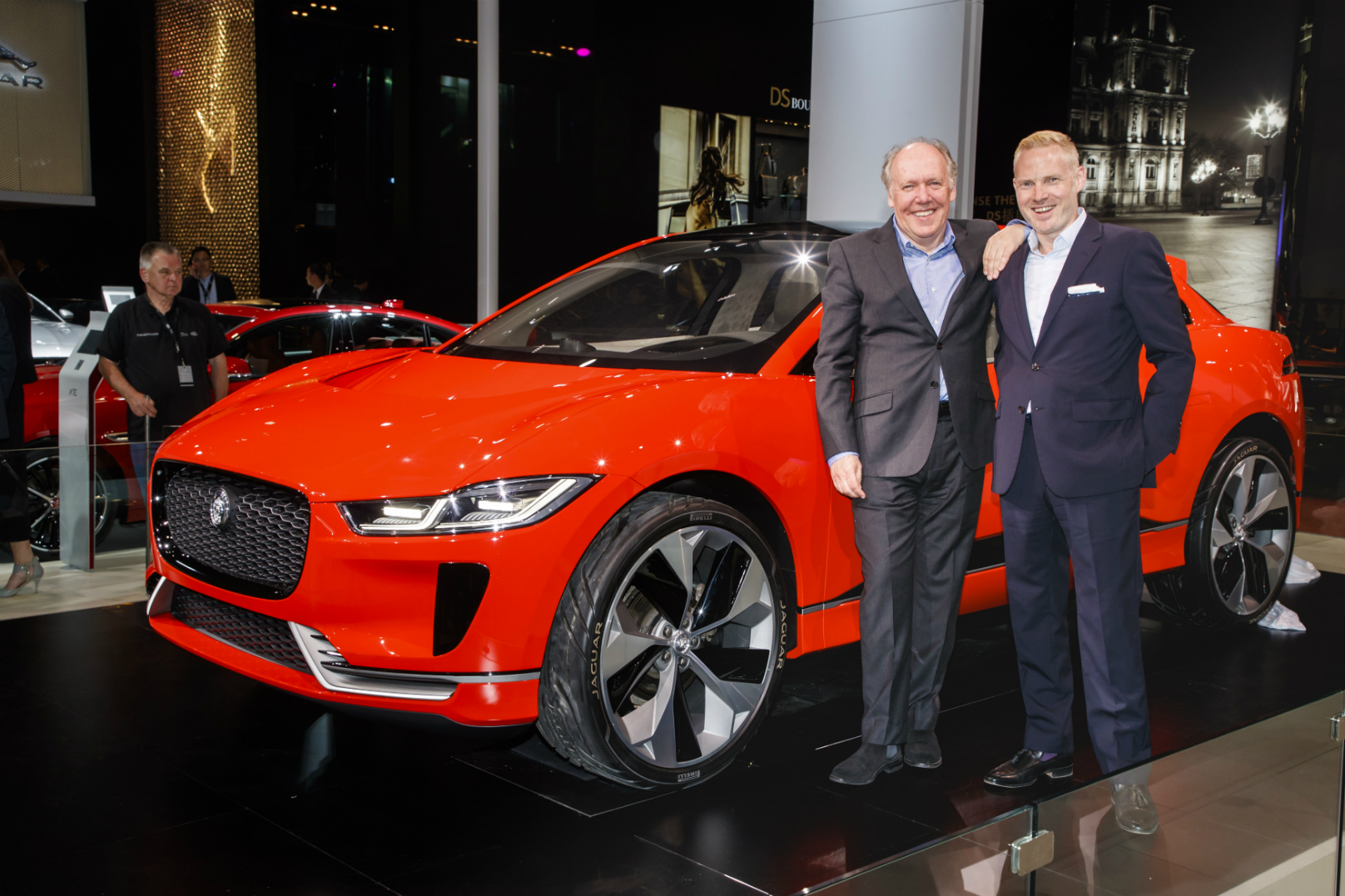 “We’re constantly looking at market trends and consumer interests. For us, the best approach is a diversified portfolio of four-cylinder and six-cylinder Diesel and petrol, V8 performance, and the upcoming battery electric and the plug-in hybrid.”

One of the things that drew me to talk to Larsen in L.A. was — and is — his obvious passion and enthusiasm for his calling. All I had to say was the word “connectivity,” and he was off and running.

“We have our ‘In Control’ remote,” he said. “All you have to do is download this app onto your smartphone. We’re talking here (on the show floor), and I can take a quick look, and it’s telling me I have about a quarter of a tank of fuel left in the tank, which translates into a range of about 83 miles. It tells me my odometer reading and that the car is unlocked. Now, I could play a trick on the parking lot attendant and lock it from here, but I won’t. I could also really surprise him by starting it up, but I won’t do that either. But I can.

“One of the great, unique features you get with the new Land Rover Discovery, for instance, is that you have the ability to remotely fold all the seats in the car. So, you’re in line at Home Depot and you want to pay for some big box that you’re going to take home, and rather than stand there looking off into space, I could fold the seats and reconfigure my vehicle so that when I get out to the car with my big package, it’s all ready.

“And do you know what? Time is precious, and I just told you how you can save a whole lot of it. Conveniences like that can only help the customer.”

Now, I have U.S. roots — my maternal grandfather was born in Michigan and my late mother was a native of Montana — and I’ve always been impressed by the “can-do” attitude of most Americans. You know, work harder than anybody else and you’ll benefit. Larsen is a wonderful example of how you can still start pretty much at the bottom of a corporation and aim to reach the top.

“I got into the auto business right out of university — I went to Marist College in Poughkeepsie, N.Y.,” he said. “My first full-time job was with Mercedes-Benz, answering phones for roadside assistance. Then I had an opportunity to work in a factory and then, a little later, at corporate HQ in Europe. That wound up being a Godsend, because I worked for 13 years with Mercedes-Benz in product planning.

“I launched the S Class and moved over to a distribution role. I was responsible for allocation ordering and logistics. Back here in the States, Mercedes announced they were moving to Atlanta. I have four small children, and I didn’t want to move. At the exact same time, there was a manager of distribution opening at Jaguar Land Rover near where I live in New Jersey. The job had all the same functions — allocation ordering and logistics.

“I switched over to JLR, and I was in that role for a year, and then the product planning position opened, and I’ve been pinching myself ever since. I’ve been in the industry for almost 25 years, and it feels like two weeks.”

And then he said something that really made me smile. I’d asked how many interviews he’d done that day and he said a lot — adding:

“It’s been a long day, yes, but as I came in, I was coming out of the Lincoln Tunnel and I was listening to Bloomberg News, and all of a sudden I heard, ‘Later today, we’re going to cover the New York Auto Show with JLR spokesman David Larsen,’ and I go, ‘Wow! That’s me!’

Also Read: NYC is the perfect setting for an auto show

“I’ve been on Cloud 9 ever since. I’m pumped. Keep asking questions. I’m here to answer them.”

OK, Dave. And now that I’ve finished with Ellie Goulding, Roger Penske and you, all I have to say is: It’s been a pleasure.