LOS ANGELES, CA: After languishing in obscurity in the luxury automotive market for several years, Ford’s Lincoln brand has been on a roll of late.

Perhaps more importantly, Lincoln has been able to attract a younger demographic with the average of age of buyers now 58, down from 67 a few years ago.

So with those figures in mind and sales momentum building in North America and globally, particularly in China, Lincoln couldn’t find a more opportune time to introduce their redesigned MKZ midsize sedan than right now when the market is red hot.

They chose California and the eve of the Los Angeles auto show press day to debut the new 2017 model. It’s a fitting place for the unveiling as California is a big market for them. Lincoln’s sales have doubled there over the past five years.

In China, the brand was only introduced last year and already the firm has 24 stores there with a new one slated to open about every 10 days in the next year.

As the volume leader for Lincoln, the fortunes of the MKZ are particularly important. So Lincoln has been listening to its customers and incorporated a number of their needs and wants into the 2017 model.

“Our customers are looking for three attributes in a luxury midsize sedan— technologies that ease their everyday experience, a beautiful design that is crafted with attention to detail and a vehicle with impressive power that makes it a pleasure to drive,” said Kumar Galhotra, president of Lincoln.

Lincoln designers have redone the MKZ from the inside out. For example, engineers have gone back to switches and dials on the ventilation and audio functions in place of slider adjustments. As well, interior craftsmanship has been a priority along with special attention to detail to bring out the “quiet luxury” Lincoln is emphasizing in the brand.

Outside, the MKZ features the new look Lincoln front grille.

A potent 3.0-litre V6 twin turbo will power the new Lincoln MKZ. Driving enthusiasts will love this engine, which produces 400 hp and 400 lb/ft of torque. A gas-electric hybrid model will also be available.

In Canada, all models will have all-wheel drive except the hybrid, which will be front-drive only.

Among the new technology available will be an auto hold feature that keeps the car at a stop with the push of a button, allowing the driver to take his/her feet off the brake pedal in stop-and-go driving.

Also offered will be an enhanced park assist system using ultrasonic sensors to help guide the car into a parallel or perpendicular parking spot.

Another enhanced feature is collision assist with pedestrian detection that can help avoid some frontal collisions or at least lessen the severity of the impact.

Drivers who enjoy taking the car to the limits will benefit from dynamic torque vectoring, part of a Driver’s Package available with the 3.0-litre engine. This system enhances cornering agility without compromising ride comfort.

The new Lincoln MKZ goes on sales next summer. 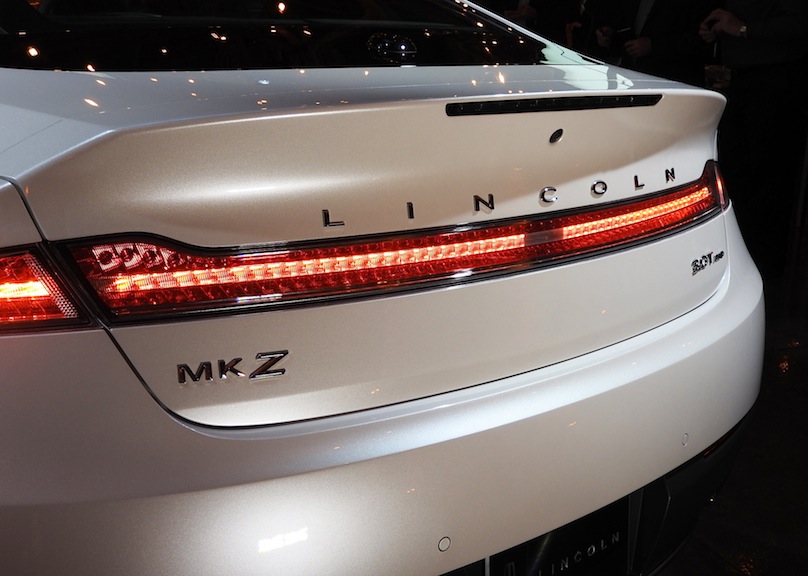