Organized and run by students within the college’s Automotive Business School of Canada, (ABSC) this is an opportunity for the general public to attend a bona fide showcase of many of the latest and greatest vehicles brought to the event by the majority of major auto manufacturers in Canada.

BARRIE, Ontario – Every year, usually one of the first summer events of the season occurs on the grounds of Georgian College. It’s the Georgian Auto Show, the largest outdoor, student-run auto show in North America.

Organized and run by students within the college’s Automotive Business School of Canada, (ABSC) this is an opportunity for the general public to attend a bona fide showcase of many of the latest and greatest vehicles brought to the event by the majority of major auto manufacturers in Canada. With upwards of 11,000 visitors experiencing a no-pressure, sales free environment, the walk through the expansive area is devoid of tactics and ploys to either draw you closer – or even scare you off.

There are no “what-do-I-have-to-do-to-put-you-in-this-car?” sales people. None. Instead, the manufacturers have students operate as brand ambassadors. Their role is to inform – not sell. They have attended product learning sessions in advance so they are as familiar as possible with the marques they represent under the branded canvas. If they do not have an answer to a specific question, they will find out for you and communicate the response after the fact. 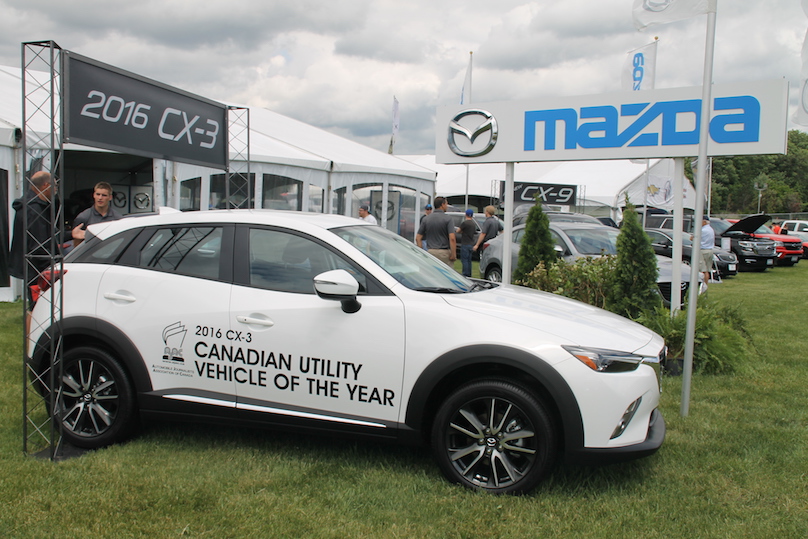 From Friday, June 3 to Sunday, June 5, close to 200 eager student volunteers were present, working every area of this sprawling event, interacting with the public in every role imaginable. Manning manufacturer tents; assisting with special attractions, including the Plug ‘n Drive Experience and the Pfaff Porsche autocross; selling tickets; culinary students assisting with the food preparation; acting as willing guides to consumers who were looking for something specific; and, running a live auction, involving all donated merchandise. A portion of the proceeds from this auction go toward scholarships for students attending ABSC.

As much as anything, the environment for three days is a unique venue for students to network and interact with automotive dealers, some of the manufacturers and of course, car enthusiasts. 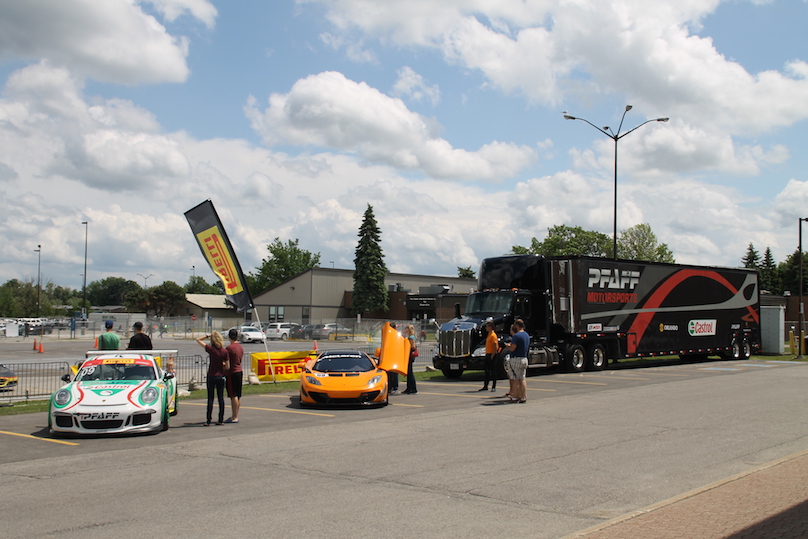 An event of this scope does not happen overnight. While there is much information that might be gleaned from 31 of these shows since 1985, every year, there is usually something unique and, of course challenging. This is an excellent proving ground for all students who participate. To be clear, planning these days for this show begins in October. At that time, five students from the ABSC diploma and degree programmes are brought in as members of the overall organizing committee. Each of these five full-time students assumes a role – as if they were working in a company involved in the planning and presentation of a three-day event. For 2016, those members were Chris Anderson, Student Director – Marketing and Media Relations; Binay Batra, Student Director – Site Management and Logistics; Josie Duguay, Student Director – Student Experience; Tristan Chalifoux-Lemarche, Student Director – Customer Experience ; and Marcus Sisconetto, Student Director – Performance and Sponsorship.

Bear in mind, each of these five individuals is also carrying a full course load in addition to performing their individual assignments. To be clear, these students are compensated for all the work they do for this huge event: there is a clear understanding that their involvement cannot have any adverse effects on their gaining either their diploma or degree. They are expected to perform their duties individually – and also as a team. While holding one of these five positions looks great on a resume, there are no safety nets – just like the real world. They willingly assume the responsibility and accountability which comes with the position. After all, the show cannot be postponed if someone does not fulfill their appropriate task. 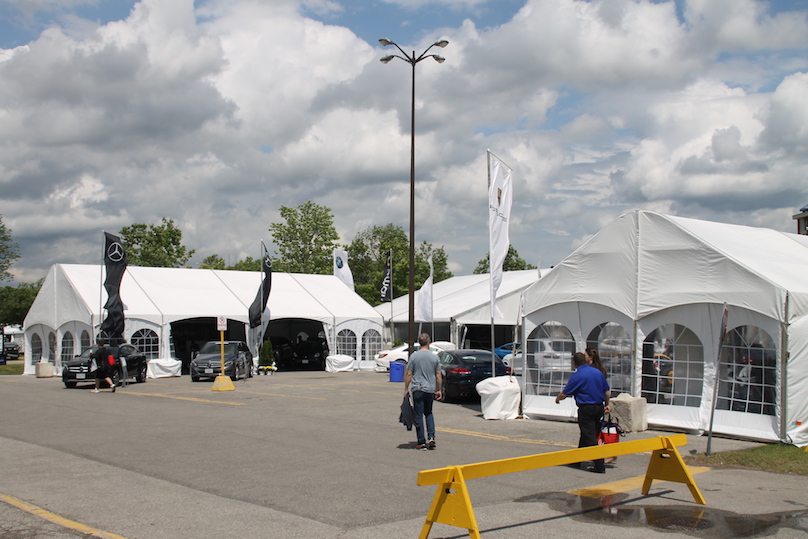 Just like the real world which some will enter sooner than later, the training and life experience this show provides is unique. There are many people who rely on the event running smoothly from the 200 or so students involved in every facet of this experience, easy to recognize by their branded polo shirts and to the dealers and manufacturers who between them contribute 222 different current automobiles with a retail value of close to $12 million. Nothing is left to chance.

This year the theme determined by the students for the show was “Driving Innovation Forward” – reflecting the ever-changing and evolving automotive industry juxtaposed against the forward-thinking ABSC.

Some of the shows highlights included the popular and returning Pfaff Porsche autocross track; those that had not had a large meal beforehand, would buy a ticket for the experience of a lifetime – to ride shotgun in a powerful sports performance Porsche, as an experienced driver launched one of two alternating Porsche 911 Caymans through and around a pylon-marked course which was constantly hosed down by firefighters from Barrie’s fire department. For some, the longest two minutes or so of their lives, for others… well, let’s just say they went back in line and bought another ticket. 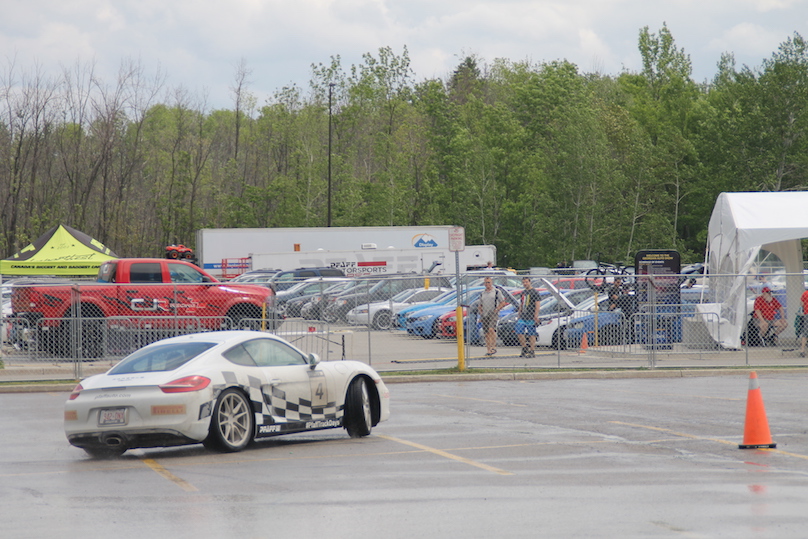 Another popular and timely exhibit was the Plug ‘n Drive Experience. In an area separate from the actual show, Georgian has a couple of charging stations. In this parking area was a Tesla; a Ford Fusion; a Ford C-Max and Ford Focus; a Mitsubishi i-miev; a Nissan Leaf, a BMW 1-3, a Chevrolet Volt; and last but not least, a funky-looking red and black Kia Soul. An excellent cross section of either all electric vehicles (BEV), plug in hybrids (PHEVs) and extended range EVs with back up gasoline-fueled internal combustion engines. Consumers had an opportunity to take a spin behind the wheel with a brand ambassador who could explain the basics on how the vehicle they drove in performed.

It was at this stand that a conversation was overheard between an older couple with an ambassador beside the Soul. Paraphrased for brevity.

Wife: “So you could still work on this in your garage?”

Husband: “Yup, course I could. How hard could it be to change the oil on this small car?”

Ambassador: “Pardon me… that would be impossible – there is no engine as you know it and this vehicle does not require an oil change. Ever. It runs on electricity…”

As I headed for the exit, I could not help but notice that “Batman” had left the side of his Batmobile and was over at the Pfaff area, standing beside a Maclaren, gazing at the 911s hurtling around the closed course and wondered if he might be a little envious? Perhaps he’ll return next year as a regular consumer and buy a ticket – then settle in for the experience of a lifetime.