Racing Roundup: Lewis Hamilton Wins Fifth
World Championship but the Best of All Time? Not a Chance!

There was a moment just before the start of Sunday’s Grand Prix of Mexico that I thought symbolically summed up the 2018 season in particular and the four years before that in general.
There was a glimpse of Lewis Hamilton riding a human-powered scooter toward his place on the starting grid. It was followed moments later by a shot of Sebastian Vettel running to his car.

Lewis would push-off with one leg and then ride along on the scooter, looking up at the crowd and listening to whatever through his ear buds, confident in his abilities and the fact that – as has been the case throughout his Formula One career and most of what came before it – he had the best car and the best team behind him. It looked like he didn’t have a care in the world.
Vettel’s sprint, meantime, made him look like he was running to catch up. After winning four consecutive world titles at Red Bull, starting in 2010, he did not win a single race in 2014 (hybrid engines had been introduced to F1 and Renault, which supplied the “power units” to Red Bull, had not – apparently – adjusted accordingly) and so he left for Ferrari at the end of the season in which Hamilton won his second championship.

Since then, a combination of poor team strategy, poor driving decisions on his part plus a smattering of unreliability has left Ferrari struggling to keep up with Hamilton’s employer, Mercedes.

Everybody – or just about everybody – maintains that Juan Manuel Fangio was the best F1 racing driver of the 1950s. But how do they know? Yes, he won five world championship but that was because many of his rivals – and this is not much of an exaggeration – managed to get themselves killed. Was he better than Peter Collins? Mike Hawthorne? Alberto Ascari? And although he wasn’t killed, was Fangio really all that much better than Stirling Moss?

And what about this? In 1956, there were eight races that made up the world championship. In three of them – three – he took over his teammate’s car after his conked out. And I’m not talking about after practice, or something. He took over those other cars during the races. In Argentina, he commandeered teammate Luigi Musso’s car after his suffered a fuel-pump failure and he went on to win. At Monaco, he crashed, so he called in teammate Collins, took over his car, and finished second. At Monza, he again had Collins called in and went on to win – and this was in the final race of the year and Collins was in contention! The points he gained vaulted him past Collins and gave him the title.

So Fangio was undoubtedly great but the greatest? As you can see, that’s open to debate.

Yes, the best – and, I guess, the only – way to determine value and greatness is through races won, pole positions and championships. And yet, does that really prove anything? James Hunt is the perfect example of that. He broke into Formula One with Lord Alexander Hesketh and a bunch of guys they seem to have rounded up from the local pub. It was a lark, and it showed. But then, through a series of circumstances, Hunt wound up in a McLaren in 1976 and promptly won the  world championship.

So if Vettel was in the Mercedes and Hamilton in the Ferrari, would Vettel be world champion today? I think so – but then again, maybe not.

It’s a mug’s game for anybody to argue that so-and-so was the greatest of a generation or the greatest of all time. Auto racing has got to be a combination of car and driver, both at the top of their game. Schumacher and Ferrari, Senna and McLaren, Clark and Lotus were the cream of the crop when they were all hitting on all cylinders. But take Michael out of the Ferrari and put in Jacques Villeneuve or Mika Hakkinen and would they have done as well? Or would they have been better?

Because of previous history, everybody was anticipating all hell to break loose at the start of the Mexican GP Sunday. According to the Sky television network team of reporters, six cars would go charging into the first turn and there was only room for two of them to exit.

So Hamilton got a fantastic start and nearly snatched the lead from Max Verstappen, who also managed to get past pole-sitter Daniel Ricciardo (who would go out again with yet another wonky power unit). Vettel, who started third, fell back to fifth at one point but finished the first lap in fourth place. It was nice to see “Seb” use his head for a change and live to fight for the podium. As it turned out, he was second and his Ferrari teammate, Kimi Raikkonen, was third behind race-winner Verstappen.

Hamilton was fourth and the points were enough to give him the title. He was also the last of the 20 starters on the lead lap. Valtteri Bottas, his Mercedes teammate, was a lap down in fifth. Positions six through 14 were two laps down and Romain Grosjean, who was 15th, was three laps behind. Everybody from 16th through 20th went out of the race earlier.

It was not exactly a nail-biter. But it had its moments. Toward the end of the race, Hamilton missed his braking point and went off into the grass. That got everybody’s attention. Ironically (or coincidentally), later in the same lap, Bottas did the same thing! I was – I have to admit – sorta dozing at that point and initially thought it was a replay of Hamilton but sat right up in my easy chair when I realized it was Bottas. The thought that Mercedes either had brake problems or serious tire problems that might see them drop out and extend the championship battle to the next race got my attention – as I’m sure it did others.

Three observations, courtesy of a friend via email: Max suffers from the same disease as Kimi: a terminal lack of charimsa; Jeff Gordon and Hamilton are pals. Lewis was at Homestead-Miami for Gordon’s last NASCAR race (although Jeff did return to drive some races the following year) and Gordon seems to show up whenever something significant is happening with Lewis; kudos to Sebastian for breaking off an interview with David Coulthard to go congratulate Lewis. It was obviously a very difficult thing for him to do but he did it and he is a sportsman. 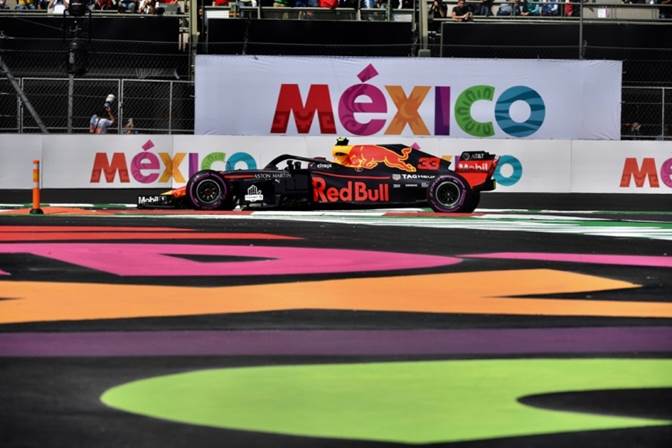 Max Verstappen won the Mexican Grand Prix on Sunday while his teammate, Daniel Ricciardo, went out with engine trouble.

I was at the Indianapolis Motor Speedway in 2003 when Jeff Gordon and Juan Pablo Montoya traded cars for a day – Montoya got to test Gordon’s NASCAR Cup car and Gordon got to drive Montoya’s Williams BMW. It was always billed as a publicity stunt but I watched what was happening and particularly the interest shown by the Williams crew when Gordon was on the track – the road course at Indy – and came to the conclusion that it was really an F1 test in disguise. Williams was being sponsored by Hewlett-Packard at that time and there is no doubt they wanted an American driver. Two years later, Frank Williams let it slip at the Canadian Grand Prix that Williams had wanted Gordon but they couldn’t afford him. “His price was too high for us,” he said. For his part, Gordon said on a number of occasions that he was tempted to try F1 but that he felt it was too late to make the switch because it would take him too long to get used to driving an open-cockpit car again after having been in stock cars for so many years (he was in his 11th year of stock car racing at that point). Sunday, he told interviewer Martin Brudle that he’d been jealous of the F1 drivers of the day and was sorry that he hadn’t been able to race against them. We’re sorry too, Jeff.
For a blow-by-blow account of the 2018 Mexican GP, please click here

OTHER RACING, OTHER NOTES

Cole Pearn of London, Ont., crew chief for Martin Truex Jr., let Team Penske crew-chief-for-Joey-Logano Todd Gordon know what he thought about the situation after the Monster Energy NASCAR Cup race Sunday afternoon at Martinsville, Va. Logano pulled the old bump-and-run on Truex on the last lap to get past the Furniture Row Racing driver and win not only the race but a spot in the final four as the NASCAR playoffs wind down. Denny Hamlin also got past Truex as he struggled to regain control of his car. Truex finished third. Canadian D.J Kennington, of St. Thomas, Ont., who was inducted into the Canadian Motorsport Hall of Fame a week ago, finished 27th. For a story on the race, please click here

. . . . . Johnny Sauter won the Camping World Trucks Race at Martinsville on Saturday – and reserved a spot for himself in the Final Four. Brett Mofitt was second and Myatt Snider finished third. Canadian Stewart Friesen of Niagara-on-the-Lake was eleventh. . . . . . Robert Wickens has clarified previous statements about the extent of his injuries and says he is paralyzed from the chest down. But he says he will fight with every ounce of his being to not only walk again but race again. We’re with you, Robbie, either way. . . . . Sebastien Loeb won Rally Spain at the weekend, the second-last rally of the 2018 WRC. . . . . Donny Schatz continued his remarkable 2018 campaign with a $51,000 payday at Port Royal (Pa.) Speedway, passing Brad Sweet on Lap 32 to win the Tuscarora 50. Freddie Rahmer surged from 16th to finish second with Daryn Pittman charging from 23rd to third on the excellent daytime racing surface.. . . . . Maverick Vinales (what a name, eh?) ended Yamaha’s 25-race victory drought by storming to a spectacular win at the Michelin Australian Motorcycle Grand Prix. But who walks away from a motorcycle accident at 185 miles an hour? French MotoGP rider Johann Zarco, that’s who. He collided with Mark Marquez and went flying. Marquex stayed on his bike but it was damaged sufficiently to put him out of the race. . . . . . Finally, Steve Torrence remained perfect in the Countdown to the Championship and earned his first Mello Yello NHRA Top Fuel title, J.R. Todd took over the Funny Car points lead, Bo Butner earned his first Pro Stock win since the Winternationals and Hector Arana Jr. stayed in the Pro Stock Motorcycle race at the NHRA Toyota Nationals in Las Vegas, Nev. Thanks to the NHRA website for the previous paragraph. 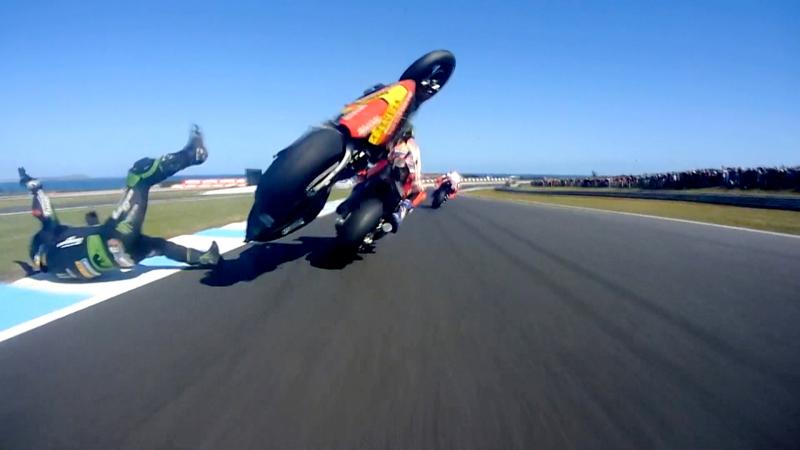 MotoGP racer Johann Zarco flew off his bike at 185 mph in the Australian Motorcycle Grand Prix. He walked away.