The Autoshow has dedicated a serious amount of prime real estate to an area where kids of all ages can play with toy cars, while surrounded by life sized recreations of Hot Wheels models.

Few things are more frustrating at a car show than seeing kids who are bored out of their minds being dragged around the show by their wheels obsessed parental units. Kid friendly interactive displays don’t tend to be available at most shows. Thankfully, the 2018 Canadian International Autoshow isn’t like most other shows!

To celebrate the 50th anniversary of the iconic Hot Wheels brand, the Autoshow has dedicated a serious amount of prime real estate to an area where kids of all ages can play with toy cars, while surrounded by life sized recreations of Hot Wheels models.

When I say kids of all ages, that is no exaggeration, as a glance down from the gallery overhead shows just as many adults taking their turns on the giant collection of play sets as there are kids. A little known fact among automotive media is that most journalists rank Hot Wheels right up there next to diesel station wagons with manual transmissions on the cool scale.

On the market since the Winter of 1968, Hot Wheels turned the diecast car market on its ear, by offering up flashy California inspired designs with features like mag wheels with red striped slicks, customized engines and detailed, all metal bodies. Mattel touted the new toys as “The fastest miniature cars you’ve ever seen”.

As a kid growing up in a racing household, the Hot Wheels bug hit me hard by the time I was about 6 years old in 1973 and my buddies came along for the ride. We would spend hours running up and down the basement stairs, as our tiny cars zoomed down the signature orange track. When we got bored of all out drag racing, we would switch it up and make a huge ramp, seeing which car would fly the farthest across the “rec room”.

Perhaps the most brilliant selling feature of Hot Wheels was that they were, and still are, available for less than the price of a coffee, meaning that parents were happy to let their kid pick one up every time they went to the store. 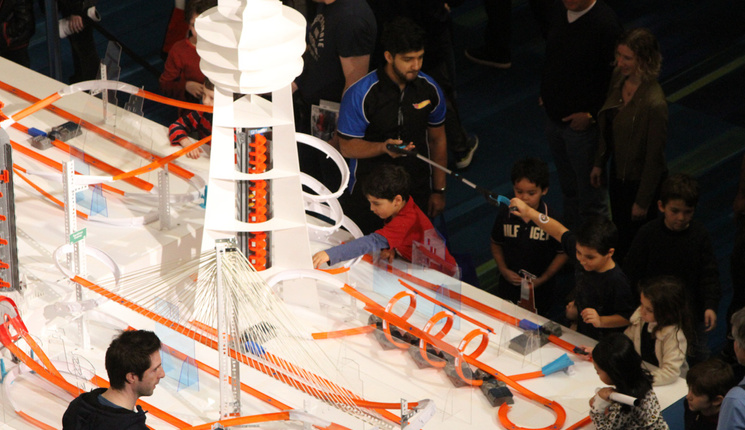 As a fifty year old, I still have a tough time passing up the Hot Wheels section of the local grocery store. It would seem that I am far from being the only one, as more than 6 Billion Hot Wheels have been sold world wide! Many adults have become rabid collectors of the toy cars.

A trio of full scale Hot Wheels cars are smack dab in the middle of the main display on the 700 level of the south building in the Metro Toronto Convention Centre.

A gold 1967 Camaro RS is a recreation of one of the original sixteen cars and was seen in the recent Hot Wheels Challenge Accepted TV spot. This car has chrome side pipes, a stinger hood and red line tires, just like the original toy. Pictures really don’t do this car justice, as it really does look like a giant Hot Wheels car, rather than just a Camaro with side pipes.

The star of the main display however has to be the Darth Vader car. Built in 2014 as a partnership between Hot Wheels and Star Wars and debuted at the San Diego Comic-Con. The car is powered by a 526 horsepower LS3 and sports red line tires. Lord Vader’s heavy breathing can be heard emanating from the car. Mounted in the centre console is an actual light sabre used in the original Star Wars movie. You can bet I was in full geek mode when I was invited to see it up close!

On the 600 level, show guests will find one of the heavily modified Mitsubishi Evo X loop cars which drifting and rally star Tanner Faust and stunt driver Greg Tracy successfully drove through a 66 foot double loop track at the X-Games, setting a new world record.

In the north building, fans will find the Hot Wheels Buggy which soared 92 feet off a corkscrew ramp while making a 360 degree spiral at the Hot Wheels test facility setting new world records for the longest and highest corkscrew jump. 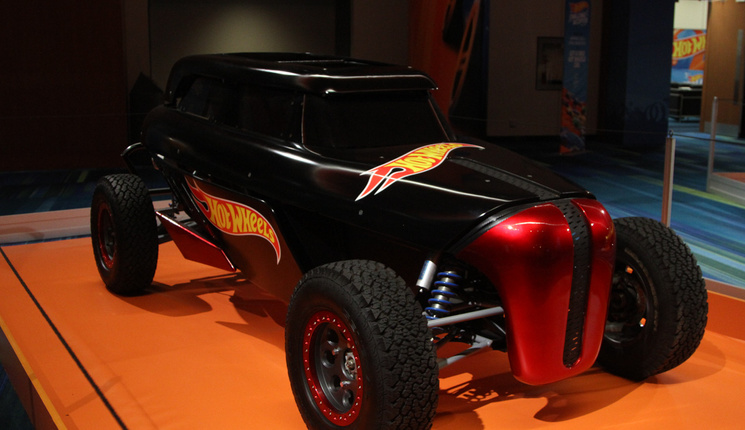 Located in the Auto Exotica room is the 1966 Pontiac GTO nicknamed The Goat, which was first shown at the 2006 SEMA show in Las Vegas. It features special Hot Wheels paint and wheels and is powered by a massive 455 ci V-8. The Goat totally fits in sitting next to the world’s fastest car, the Koenigsegg Agera RS.

I had the opportunity to spend some time before the show, with Hot Wheels Vice-President of Design, Ted Wu about his involvement in the brand. Design guys are always fun to talk with because they tend to be very passionate about creating cool stuff and Wu is no exception.

Wu grew up playing with Hot Wheels, so when he began studying illustration and animation alongside business in university, he extended his love of toys into his designs. Beginning his career at Mattel 15 years ago, Wu called on both aspects of his schooling while working his way through the ranks.

Just a few years ago, the California resident joined the Hot Wheels brand, where he somewhat bashfully calls himself a coach rather than an actual designer. His handler at the event informed me that Wu is known for sketching a car during every team meeting and that it is not unusual for the design team to use his raw sketches as the base for their creations.

One of the few people who actually gets to drive the full sized Hot Wheels, Wu is also an avid high performance driving enthusiast, having recently started exploring his own limits in his personal Porsche 991. Of the current fleet of full sized cars, Wu’s favourite is the gold ‘67 Camaro, but he expects that it will be bumped with the arrival of a 50th anniversary COPO Camaro which will be arriving in the Hot Wheels garage soon.

Right now, Wu’s favourite cars are the 50th anniversary Camaro and the Volkswagen KäFer Racer, which is a LeMans racing styled VW Beetle created by Hot Wheels “Godfather” of design, Mark Jones, who has been on the Hot Wheels design team for 35 years.

Pop culture and movie related products are hot right now and Wu expects that trend of movie related cars, the Darth Vader car as an example, to continue to be popular. The executive says that their partnerships with real automakers will continue to be an integral part of Hot Wheels in the future along with more whimsical designs like the Roller Toaster, which is quite literally a toaster on wheels.

In addition to the giant play set display, show visitors can get down on their hands and knees in the interactive Kid Zone area, which offers a lounge type setting with tons of cars and track available that will be sure to get imaginations old and young flowing.

A collectors zone and retail store has playsets and cars for sale, with a special focus on 50th Anniversary cars and pop culture cars such as Star Wars, Marvel and DC Universe. 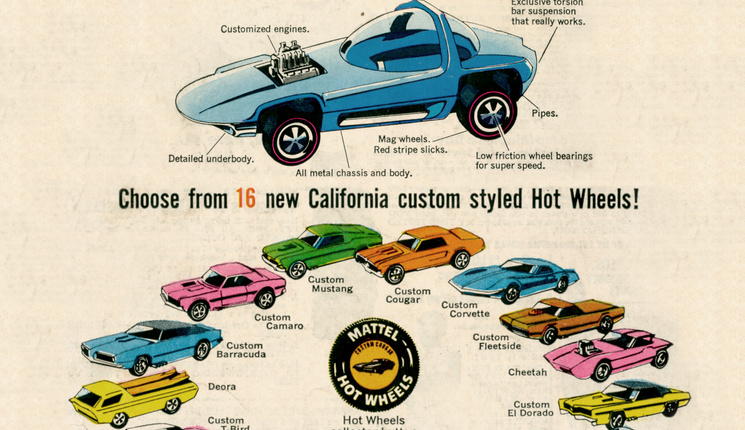