The Micra Cup car was cute and fun, but Sentra Cup is the motorsport gateway Canada needs.

Join the Conversation (0)
As I press down on the throttle, my leg is shaking.

I’m nervous. It’s been some time since I last felt this sensation, for a few reasons.

One is that I haven’t done any driving on a racetrack since before the pandemic, and I feel woefully out of practice.

Another is that the car that’s underneath me is exciting — more so, I think, than I truly expected.

This is the car that competes in the Nissan Sentra Cup, the successor series to the Nissan Micra Cup, which was discontinued at the end of the 2020 season along with the cheap and cheerful little subcompact car from which it took its name. The Nissan Sentra Cup was launched last year and ran for a full season in 2021, although it did so with far less fanfare than usual thanks to pandemic restrictions and a lack of fans in the stands.

With those restrictions lifting, the 2022 season is full speed ahead. This means Nissan is ramping up a full-scale campaign, from these media drives to the free race tickets and participation in parade laps that will be offered to Sentra owners.

This is how I find myself sitting beside Valérie Limoges, Sentra Cup race winner at the 2021 Grand Prix de Troix-Rivières, turning laps under her guidance on the driver development track at Canadian Tire Motorsport Park.

A few years ago, I lapped this same track in the Micra Cup car, in very similar conditions. At the time, I remember thinking I wasn’t cut out for racing. With 109 hp and 107 lb-ft of torque from its 1.6-litre four-cylinder engine, I felt it should have been a breeze to drive. But as enjoyable as it was — track days are almost always fun, provided they don’t end with repair bills — the car felt imbalanced, and I was inclined to constantly second-guess myself. I’m very passionate about motorsport, but I’m the furthest thing from a professional racer, so I assumed this was entirely on me. 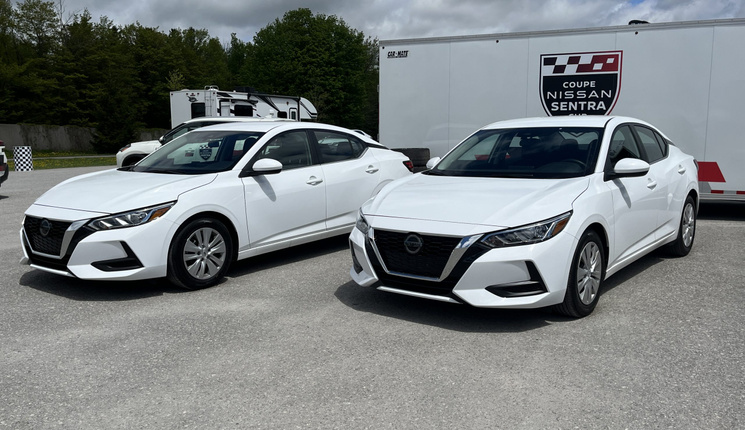 Fast forward, and I find myself driving the Sentra Cup car and second-guessing this assessment. Granted, it’s possible I’m a better driver with several more years of experience under my belt. But I’m convinced the car also has a lot to do with it. Based on the Sentra S, its 2.0-litre four-cylinder engine producing 149 hp and 146 lb-ft of torque at 4,000 rpm is the same as the one found in every Sentra at your local dealership, and the six-speed manual transmission is the same one that’s standard in the S trim.

For racing, the Sentra Cup car gets a fully custom coil-over suspension designed by Nissan partner Motorsports in Action, based in Saint-Eustache, Quebec. It also gets upgraded front brake rotors and calipers from the Z parts bin, and the rear brakes are upgraded from the drums that are standard in the S and replaced with the rear disc brakes included in higher trims. This is on top of numerous other upgrades such as Pirelli P-Zero slick racing tires, a stripped interior for weight savings, a roll cage for crash protection, a racing seat and five-point belt system, fire suppression, and other changes. 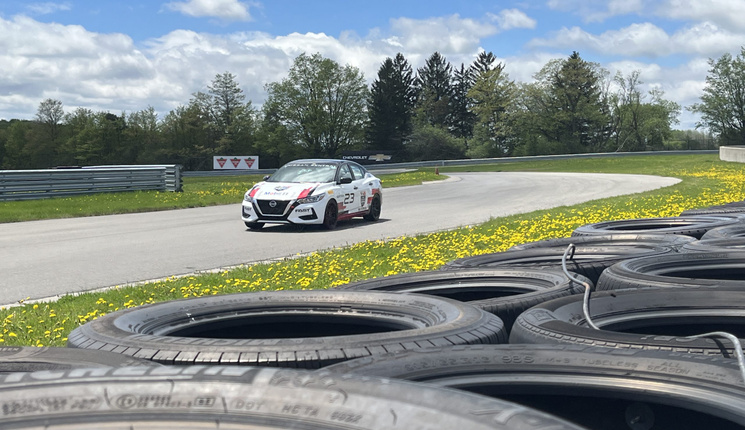 Within a handful of turns in the Sentra Cup car, I’m already feeling more confident than I ever did in the race Micra. Every aspect of every corner, from later braking to sharper turn-in, significantly reduced body roll at the apex, and stable grip through to corner exit, feels more predictable and planted. When I turn the wheel and keep my eyes scanning the track ahead, I know exactly where I’m going to end up. And it’s that confidence that lets me feel free to explore the limits both of the car and of myself as a driver. It’s approachable, if that’s a word that makes any sense to refer to a car you’re supposed to run on its very edge. In a race car, these attributes are ideal — exciting enough, in fact, to make my legs shake.

This experience affirms for me a point that several Nissan Sentra Cup drivers made during the 2021 season: this is a serious race car that’s not playing games. The Micra was fun, to be sure: seeing a couple dozen cars buzz up to the start-finish line of every race like bumblebees was great entertainment. But the Sentra Cup car deserves to be taken seriously, and the series is the entry point into motorsport Canada needs. It’s confidence-inspiring, the standard of competition in the series is excellent, and at $41,000 for a turnkey race car, it’s a relatively affordable training ground for racers who are taking a serious look at exploring the sport.

The season starts this weekend at Victoria Day SpeedFest at Canadian Tire Motorsport Park near Bowmanville, Ont., and stops at the F1 Canadian Grand Prix in Montreal, Circuit Mont-Tremblant, the Grand Prix de Trois-Rivières, and again at CTMP on Labour Day before wrapping up at Tremblant in late September. Now that spectators can return, be sure to make plans to attend, especially if you’re a Sentra owner and can receive the VIP treatment. It’s sure to be a great season of racing.