Hilary Riem's passion for restoring cars was inspired by her father

Join the Conversation (0)
For many, pandemic car ownership was fueled by a desire to create distance between themselves and others during the COVID-19 pandemic. It offered a way to escape the city and avoid public transit or ride-hailing apps. But for Hilary Riem, buying her first car during the second wave the pandemic actually brought her closer to people.

The 26-year-old Oakville native had grown up around car culture. When she was five, her father purchased his first classic: a red 1968 Oldsmobile Cutlass convertible with a black top. On weekends, he’d take her to car shows. She remembers going on a regular Tuesday night cruise with her dad. Eventually, the vehicle rusted out.

Riem’s dad, Justin, had always taken an interest in cars. As a teen in the late 1970s and early 1980s he would visit dealerships to check out the new makes and models.

“My buddy Mike and I were car guys,” he said. “We couldn’t afford the cars, but the brochures were free. Looks like I picked up about 30 in total and never got rid of them.”

His dream ride at the time? A Chevrolet Camaro. The all-American muscle car. 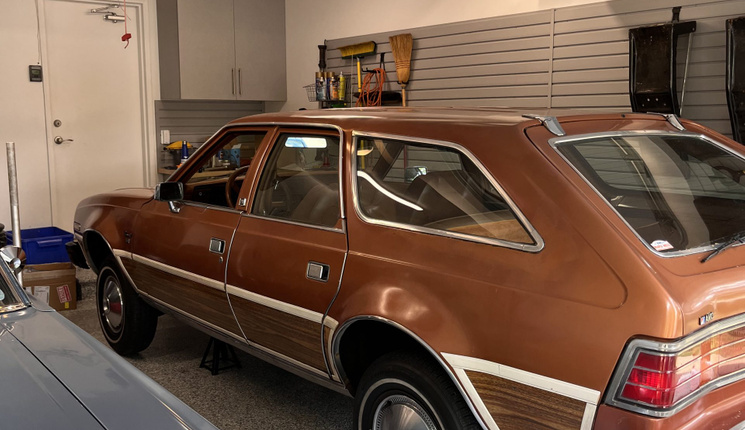 This helps explains his second classic purchase — a 1966 silver-blue Ford Mustang. What his daughter calls, “the car that started everything.” He joined a Mustang club and learned most of what he knows about repairs working on it in the family’s two-car attached garage.

“I don't think he’ll ever sell it,” said Riem about her dad and his Mustang. She got behind the wheel of that car for the first time during the pandemic. She had her license since she turned 16  but has never owned a vehicle. First a student at OCAD University, then working at an art gallery in the city, she had other ways to get around. A car seemed an unnecessary expense until COVID-19 hit.

Riem’s online search for wheels started with practical models, like a 2005 Subaru Forester XT or Volvo V70, but slowly digressed toward older vehicles.

“I was on Kijiji, and I found this wood-panelled station wagon,” said Riem. It was a 1981 AMC Concord with 40,000 kilometres on it listed for $3,000. Despite the low mileage, the wagon needed a lot of work. She asked her dad if he’d tackle the project with her.

“After 20 years of tinkering,” said Riem, referencing her dad’s work on his Mustang, “there’s not a huge amount more that you can do.”

He agreed and they had the car towed to the family home in Oakville. It was a cramped workspace, that two-car garage, especially in the summer when the Mustang was out of storage. They didn’t have a vehicle lift, so the Concord was jacked up on stands where it stayed for probably seven months. They worked with tools as classic as the cars themselves.

“A lot of the tools that we use are things that his parents gave him when he was like 16,” said Riem. “He’s just never replaced them.”

Over the course of the next year, they dedicated themselves to repairing and restoring the wagon. They worked wearing nitrile gloves and overalls. Everything that came off the car was caked in grease and had to be bathed in brake cleaner, then they had to figure out whether each part was still usable and put it back or find a new one to take its place.

“One thing that was really great about AMC is that because they were such a budget car company the (Concord) is what you would call a parts bin car,” said Riem. “All of the parts in the car come from other major car manufacturers.” 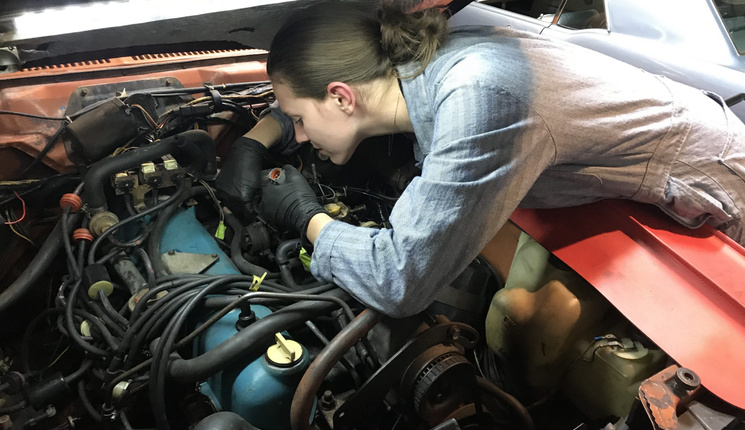 That made them easy to find and cheap. For AMC-specific items, like door handles or hinges, she would visit a scrapyard in Rockwood, Ont., called Mclean's Auto Wreckers. Facebook groups were also a great resource.

They fixed everything from the fuel gauge to the brakes. They rebuilt the carburetor. They replaced the rear main seal at the back of the engine. It’s a little rubber seal that costs five dollars, said Riem, but took 10 days of work since it meant having to disconnect every part from the engine to lift it out. She bought the car in October 2020, and it passed its safety inspection in September 2021.

“I worked on it every single weekend for a year,” Riem said. “Having this shared interest has brought us closer together. Working on cars tends to be a kind of isolating experience, something you do alone in your garage, and I think for him having a companion was really exciting.”

Along with essential repairs, Riem has also done restoration work on the vehicle. In June, she attended her first AMC-specific car show.

“That was like the big coming out,” she said. “I thought I'd be pretty alone in it. I didn't really think I'd ever meet people my age,” she continued. “I ended up meeting a really solid community of young people who are into cars.”

Just driving the car around the GTA offers another point of connection. It was at the American Motors Corporation plant in Brampton that the last assembled AMC cars to come off a conveyor belt occurred in the fall of 1987. People approach her in the street to tell her they used to work there, or that a parent did.

“I remember somebody describing AMC to me once as being remarkably unremarkable,” said Riem. Her experience has proven otherwise.