While the actors portraying detectives Starsky and Hutch were popular, they weren’t as hot as hot as the ‘Striped Tomato.’

Join the Conversation (0)
Maybe it was really all about the stripe. In the mid-1970s, not much was bigger or more recognizable in the world of primetime TV than two crime-fighting cops from Los Angeles, David Starsky and Ken Hutchinson, and their red-and-white striped Ford Gran Torino.

Truth be told, the Torino was as big, or bigger, a star as the guys who drove it.

Paul Michael Glasser and David Soul, the stars of “Starsky and Hutch” from September 1975 to August 1979, couldn’t have imagined the “Striped Tomato,” as it was known on the show, would provide so much competition.

If a car could have won an Emmy, the “Tomato” had as good a shot as any. For four years it was red-hot. And then, it happened again.

In March of 2004, the Torino rolled once more as the “Starsky and Hutch” movie hit theatres, showcasing the car 25 years after it roared off its Beverly Hills set for the last time.

The Torino was a phenomenon, turning Wednesday night into must-see TV, a fact all the more impressive considering the show’s main advertisers were Chevrolet and Dodge.

When “Starsky and Hutch” debuted in 1975, the switchboard at Spelling-Goldberg Productions in Beverly Hills was inundated with questions about the make and model of the car. 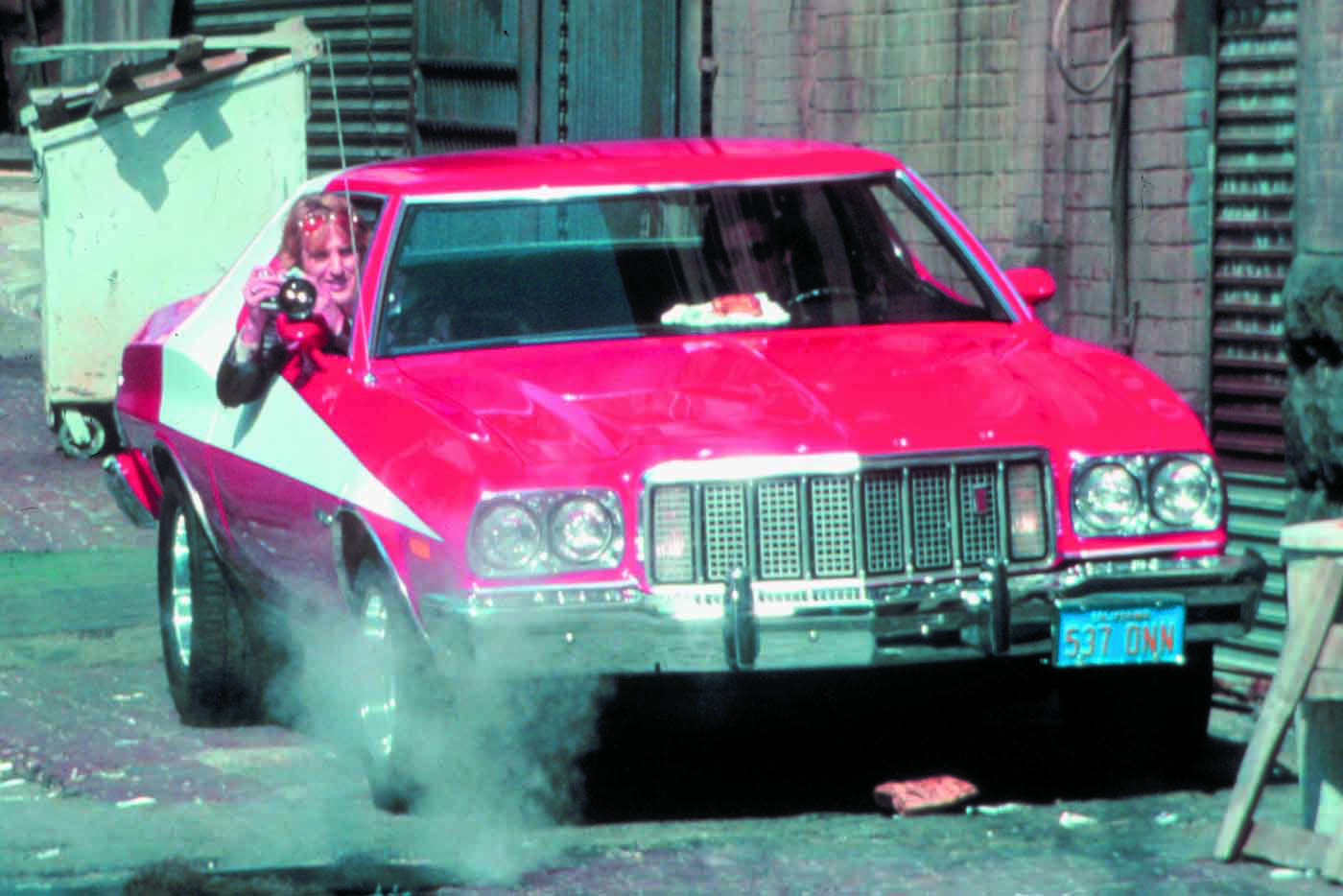 How it was conceived was pretty natural for Hollywood. Spelling-Goldberg wanted a car that would stand out in a crowd. The studio used cars from Ford’s studio-TV car-loan program and the Gran Torino emerged as an early possibility.

In a moment of brilliance, producers decided to paint the vehicle red and add the signature white stripe to the box-stock Torino.

Some modifications were made for stunt purposes. Mag wheels were added as well as oversized tires and air shocks. Glasser manned the wheel for normal driving scenes and a stunt driver took over during the chases.

Producers used a Torino with a camera mounted on the roof and a second for exterior shots. It screeched. It smoked. It spun.

But no one could have foreseen the response that followed. Fan clubs were established from Australia to Germany to England, Japan and Ireland. Auto shows continually requested the car for display purposes. Even custom van and truck shows found room on their exhibit floor for a knock-off of the coupe. They knew it would draw a crowd.

As the show gained popularity, some Ford dealers had a few Torinos painted red and white and advertised the fact that a “’Starsky and Hutch’-type car” would be at the dealership. At the height of the car’s popularity, Ford Division ordered a limited production of a comparable car with a similar paint treatment — 1,000 units in the United States and 100 for Canada — to be produced at its Chicago assembly plant.

As interest in the TV show faded, the Torino continued to rev. When Ford stopped making the car in the late 1970s, the fan clubs grew, and collectors emerged. All of which made the 2004 movie remake with actors Owen Wilson and Ben Stiller a natural.

The film’s production required nine Torinos to handle the chase scenes and peel-outs for the script.

Over the years on the TV show, the Torino’s appearance changed, but the movie version was an amalgam of all models.

Picture-car coordinator Craig Lietzke discovered none of the original Torinos were available to use as a basis for the movie cars. However, one of the special-edition Torinos Ford had produced was located. It had 1,800 original miles (2,900 kilometres) and had been in storage for 29 years. Using it as a template, Lietzke hired Premiere Studio Rentals and Cinema Vehicle Services to convert stock Torinos for the movie, also using recordings of the episodes, old photos and model cars for reference.

“Our Torinos represent bits and pieces of the car as it changed each year of the series,” Lietzke said at the time.

Even after all those years, “Starsky and Hutch” producer Alan Riche said that the car was as hot as ever. “The car is the star,” he said. “It’s one of the truly great cars. It reminds me of growing up, listening to the dual pipes — the power of Detroit. It’s still sexy.”