Paving a Suburban Driveway Is Much More Complex Than Imagined

The amount of equipment and number of crew required to do a good job is mind-blowing.

Join the Conversation (0)
Pavement, tarmac, macadam: whatever you call the stuff, it’s a surface most take for granted. Countless kilometres of black ribbon line the roads from Kamloops to Kapuskasing and Boston to Budapest, to say nothing of the effort put into maintaining billiard-like surfaces at professional tracks like Canadian Tire Motorsport Park. Even the ubiquitous suburban driveway is slathered with enough blacktop to rival the runways at Pearson – without the delayed departures, of course.

In what can only be described as a strictly first-world problem, your author had finally had it with a gravel driveway in front of his residence. Past years have proven the headache of refilling potholes, dealing with drainage, and to say nothing about the number of shear pins consumed by our snowblower after striking rocks lurking in snowbanks. It is not disingenuous to suggest we should have bought stocks in Ariens Replacement Parts as a money-making opportunity, such was past expenditures on snowblower repair.

Spending scads of money all at once is not this writer’s forte, explaining why no fewer than three quotes – from three different years – for driveway paving sat moldering in my inbox as I chewed through yet another set of shear pins. The small issue of a global pandemic sent prices through the roof on just about all consumer goods, and oil-based products like pavement have been particularly affected. In this case, the going rate to apply tarmac in front of my home rose by 30 percent in four years. Time to get off my duff, then. 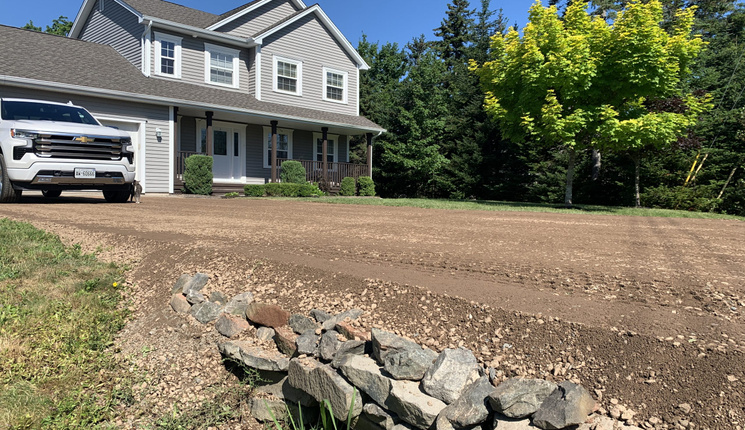 After pulling the trigger, it didn’t take long for Wil-Kare Paving to appear at my door. Measurements were taken, brows were furrowed, and questions were asked about paving right to the front step or simply steamrolling the driving surface. With grand designs involving curved walkways in mind, we settled on the latter. Besides, whip straight driveway edges are easier to trim with the Whipper Snipper, right? All the while, my addled brain was trying to comprehend why it was costing the price of a used car to lay down a bit of pavement. The answer came on day one of the job. 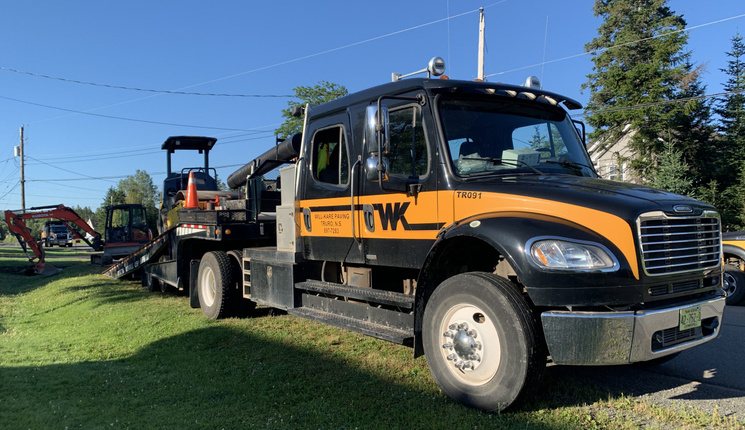 Here's a list of what appeared in front of my home, ready to work, at 6:30am Atlantic Standard Time: a Mack TR212 Granite tandem dump truck full of driveway stone, a Freightliner dump truck full of brown gravel for base work, a highway sized grader, plus one mini excavator and a yellow Bomag steamroller towed on a flatdeck by a Freightliner Business Class M2 four door commercial rig. There were more hand tools than a carpenter’s convention aboard an F-350 SuperCrew pickup, one which features a handy side-drop bed and power-assisted lifting crane. In the bed were the likes stone compactors and a gasoline-powered Husqvarna pavement cutter the size of Texas. Seven hardy men were on hand to operate it all.

And that was just for Day 1, the window of time in which the Wil-Kare crew expertly scraped and flattened the existing driveway before laying down a base several inches thick in preparation for the actual paving. That diesel-powered steamroller, it must be said, shook the entire house hard enough to rattle yer fillings and frighten the tar out of the cat. This crew was compacting and steamrolling the base layer by 8:30am and laying a topcoat of driveway stone an hour later. The result? A surface flatter than the Prairies and ready to accept a fresh tier of hot asphalt in two days’ time. 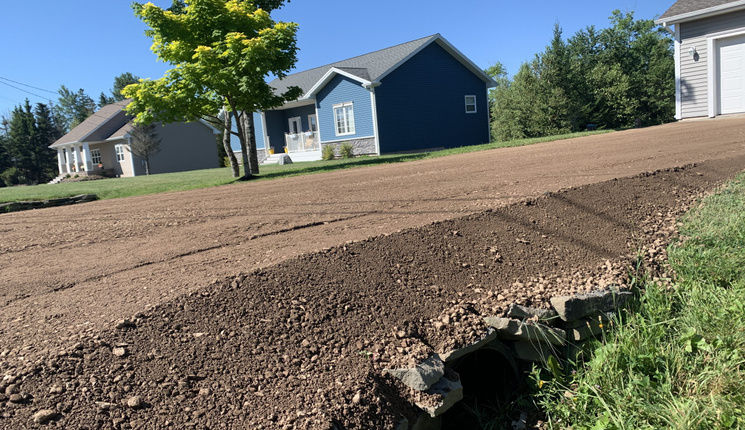 Heeding the warning not to scuff up the freshly-laid and tabletop smooth base layer (no driveway burnouts for the next two days, got it), Crew #2 showed up around noon on Friday. It had rained earlier in the morning, but not torrentially so, meaning the lads could still use the surface for paving. Had there been rivers of misery falling from the sky, the base would have needed to be re-flattened. Herein lay a clue that this company had no intention of doing sloppy work, since they were adamant a smooth base was necessary to proceed. If you take any buying advice from this story, dear reader, let it be that the company doing your paving needs to take prep work as seriously as the final project. 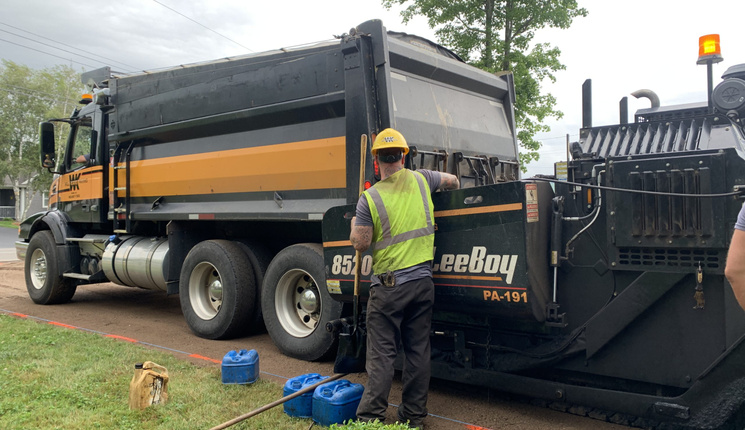 Onwards to paving, then. An entirely new crew of 7 souls showed up for this task, some in a pair of GMC Sierra 3500 crew cab pickups, armed with an enormous pavement laying machine which was, despite its size, licensed for the street. According to its operator, this LeeBoy 8520 can adjust its width depending on project demands, controlled from a perch high atop the rear of the machine. Think of the Zamboni at yer local rink, except this thing spits out pavement instead of sweeping up ice, and you’ve got the general idea. It has but 106 horsepower to move the better part of 20,000 pounds, but no one’s drag racing a Hellcat in this thing (it generally moves about 1.5 km/h or less during paving). Feeding the beast was a Volvo tandem dump truck full of raw material. 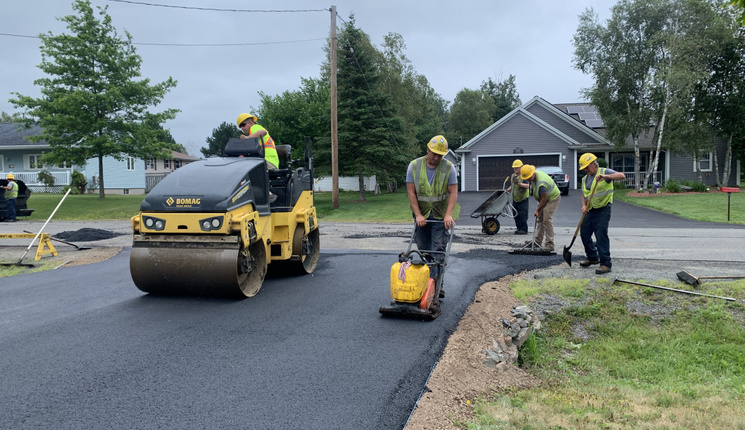 By two o’clock, all hands were doing finishing work with one person on a handheld compactor, someone else on yet another Bomag steamroller, and more rakes and shovels than found in an entire garden section of any large hardware store. One person’s sole task was to run the company’s Bobcat street sweeper, ensuring the only pavement left behind by Wil-Kare after the job’s completion was in my driveway. 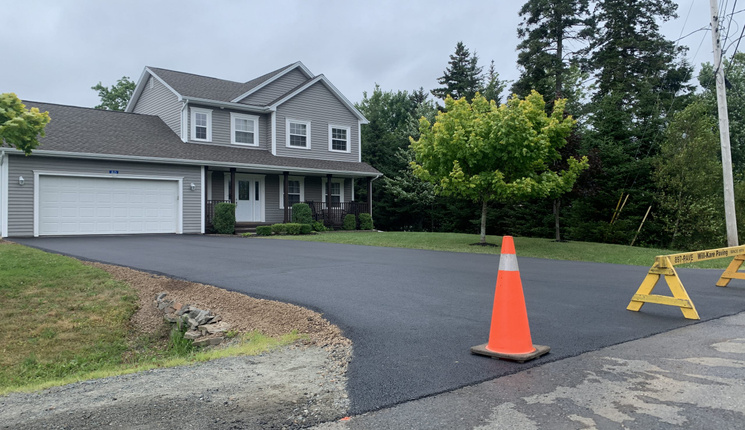 Let me emphasize: this simple suburban driveway required the use of 14 people, a dozen pieces of diesel- or gasoline-powered machinery cumulatively worth multiple millions, multiple flatdeck trailers, and enough hand tools to last into the next millennia. Two different working days and a scribbler full of mathematics rounded out some of the intangibles. Suddenly, the four-figure price tag seemed like something of a bargain. In total, the crews added several inches to the top of my original gravel driveway, expertly feathering the edges so it blended with my garage entrance and gently sloped to the street for water drainage. Remember those two details when getting a contractor to do this work at your home.

Weeks later, your author remains impressed by the work. And perhaps the total cost of the project won’t be as high as first thought; after all, I’m going to save a fortune on snowblower shear pins this winter.

We'll close this asphalt adventure with a word of caution to our readers. The company which completed our job is well known with a fleet of well-maintained trucks and a huge depot on the outskirts of town. This, combined with a great reputation, provided confidence the work would be done correctly and within budget. However, reports exist across Canada of shady macadam muckers showing up at homeowners' doors offering paving services, perhaps under the guise of doing similar work nearby. Some residents have reported these ne'er-do-wells either vanish after taking money, never finish the work, or simply do an extremely poor job. Do yer research and always remember if a deal seems too good to be true - it usually is.