We take a Chevy truck through some of the most devastatingly beautiful landscapes on the planet.

Join the Conversation (0)
Living in the far-flung land of Labrador generally requires a certain amount of toughness. For example, on an evening in 1982 the tremendously bespectacled CBC chief correspondent Knowlton Nash breathlessly reported the windchill in Labrador City had briefly plunged to a face-shattering minus 100 degrees Celsius. In response to this, residents simply and smartly all gathered in the school and community centre for warmth, emerging the next day when temps rose to a balmy -30 C.

There’s but a single road that scythes clear through the Big Land. Called Route 500, it’s a 530-kilometre ribbon of tarmac stretching from the towns of Labrador City to Happy Valley-Goose Bay, crossing the roiling Churchill River and making its way through some of the most devastatingly pretty landscape this side of a Disney movie. From there, it used to be a tough 610 km slog over a muddy and nefarious Route 510 south to the coastal area and the Labrador Straits, where one can catch a ferry to the island portion of this province provided the wind is not doing its best impression of a blustering headmaster. 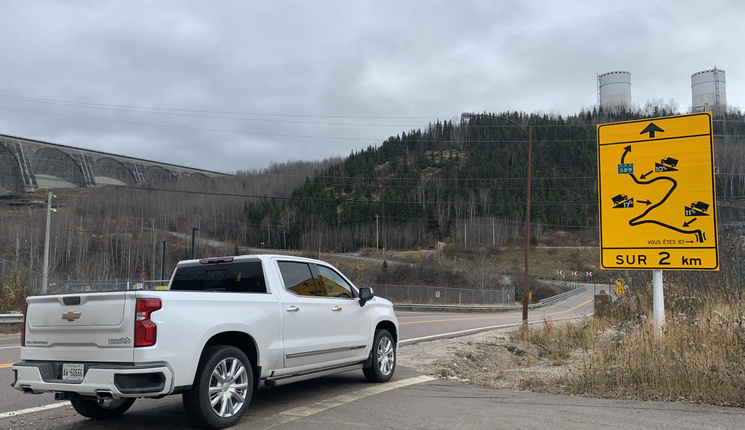 Alert readers will have noticed we said, ‘used to be’. That’s thanks in no small part to nearly $1 billion of investment in Trans-Labrador infrastructure since 1997. Earlier this year – in July, to be precise – paving crews finally connected both ends of this 1,100+ kilometre road, completing a project nearly 40 years in the making. Politicians crowed about the accomplishment, with premier Andrew Furey saying “Our government has understood the benefits a fully-paved highway would bring for Labrador communities and made it a priority to get this highway completely paved.” Those who actually did the work smiled politely for cameras.

Still, getting to Labrador up through Quebec is not for the faint of heart. Or unprepared. We saddled up a 2022 Chevrolet Silverado High Country with gear one might expect to find on a northern expedition: two jerry cans of extra fuel, an air compressor, tools including a Leatherman knife big enough to scare OJ Simpson, and a Midland two-way radio which permitted us to chat with truckers thundering their way along the desolate northern highway. 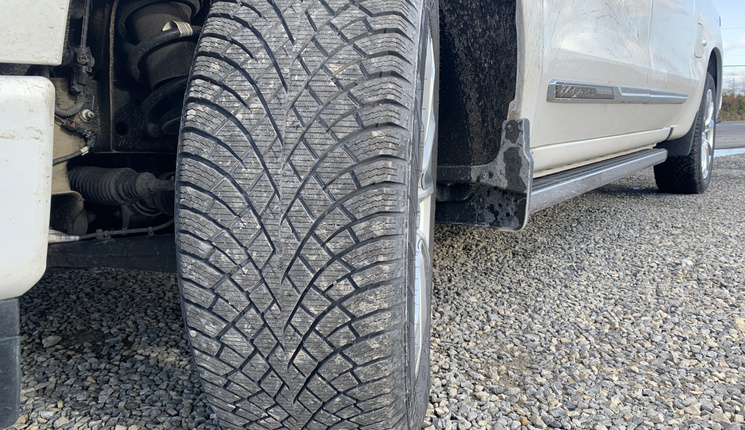 Also fitted to the Silverado was a set of Nokian Hakkapeliitta R5 winter tires, rubber designed and built by Scandinavians who know a thing or three about winter driving. Even with minimal snow in the forecast, temps were projected to be well below the 7-degree mark at which winter tires provide extra traction. These gummy Nokians have ample tread and a rubber compound filled with so-called Arctic Grip crystals. The upshot was a set of tires which were quiet on tarmac and provided ample grip on frosty mornings and in greasy mud.

Of which there were ample amounts before we even hit Labrador. The 585 km road north from Baie Comeau to Labrador City is a bizarre mix of pristine pavement and wide gravel swaths. Blowing through the ghost town of Gagnon, whose 4,000 residents literally pulled up stakes in 1985 and left behind nothing but sidewalks and parking lots, was a surreal experience just shy of the 52nd parallel. The final 100 kilometres before hitting the PQ/Lab border were defined by a mud and dirt mix slicker than snot on a doorknob, an off-camber meandering path acting as a dirty afterthought to railyards containing terrifyingly large iron ore trains. Big commercial trucks own the road up here – especially on dirt – barreling down the highway and straddling both lanes like an unruly linebacker. Cell service was non-existent. 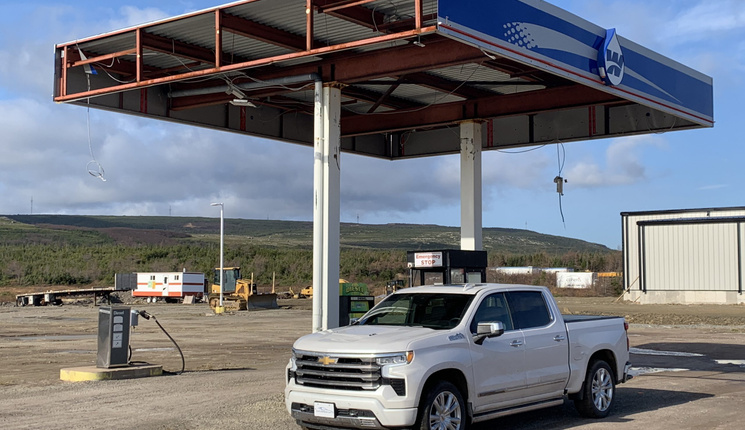 Much of this changes upon reaching Labrador. Visitors are greeted by a welcome sign of enormous proportions, appropriate for the Big Land and beset by a smattering of stickers from drivers marking their journey. Beyond this lies a slab of macadam just as good or better than anything on offer in urban Ontario. Before starting the Labrador leg, we bunked for a night in the aptly named Two Seasons Hotel and ate at a busy roadhouse whose servers dished up gigantic plates of reasonably identifiable meats.

Hitting the road in the AM meant fuelling up with a myriad of trucks leased by mining companies and their support firms; we were one of the only pickups without telephone digits painted on its flank. Route 500 out of Lab City has been paved for about five years, skirting through the wilderness and flying as a single-lane bridge over bodies of water like the mighty Churchill River. Satellite radio pops up in stretches but cellular service drops off just a few minutes outside of town. Save for a few services in the company town of Churchill Falls, you’re on your own, kid. 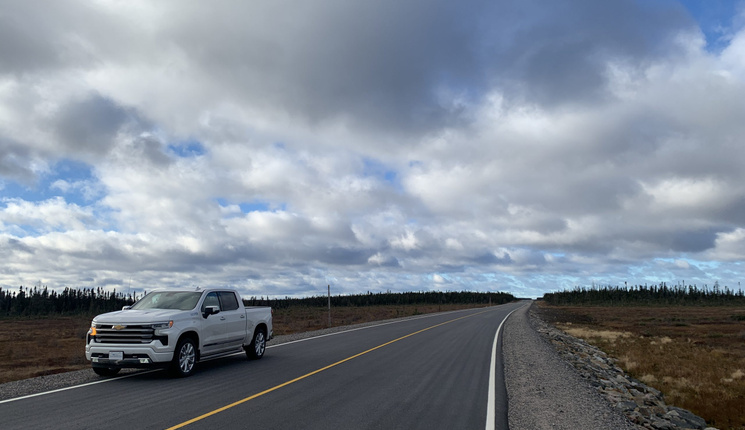 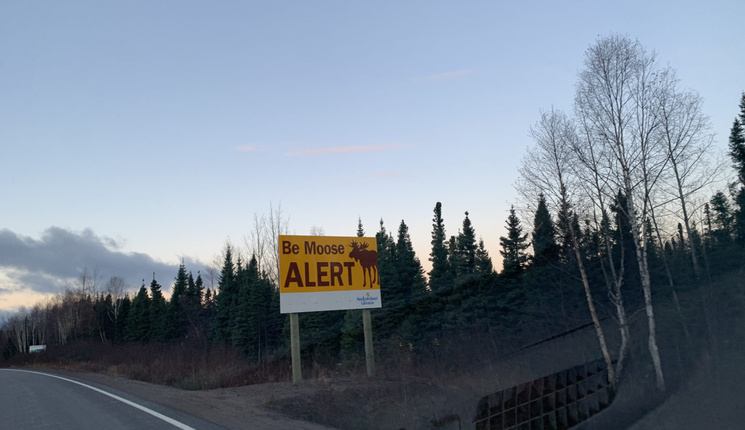 Swinging onto the southern portion of the Trans-Labrador Highway, called Route 510 and running between Happy Valley – Goose Bay and the coast, brought us to pavement laid just two months ago. Ice in the shadows and signs bearing notices of “393 km to next services” and “Be Moose Aware” reminds all hands that while the TLH is paved, they remain squarely in the wilds of Labrador. Minimal guardrails line the road, which could result in the inattentive taking a dunk in one of Labrador’s famously frigid watery bogs. Empty wide paved surfaces appear occasionally at the road’s shoulder, acting as impromptu rests stops and providing space for several commercial trucks or a passel of passenger cars.

And you will likely want to stop. The sweet smell of forest trees and subarctic taiga wafted in courtesy of the Silverado’s ventilation system, punctuated by a staccato doppler of late autumn sunshine through the trees. One can only wonder the olfactory experience of driving through this area in a convertible, though this author would not want to do so in summer months when hordes of blackflies emerge with a vengeance and mosquitos the size of helicopters reign. 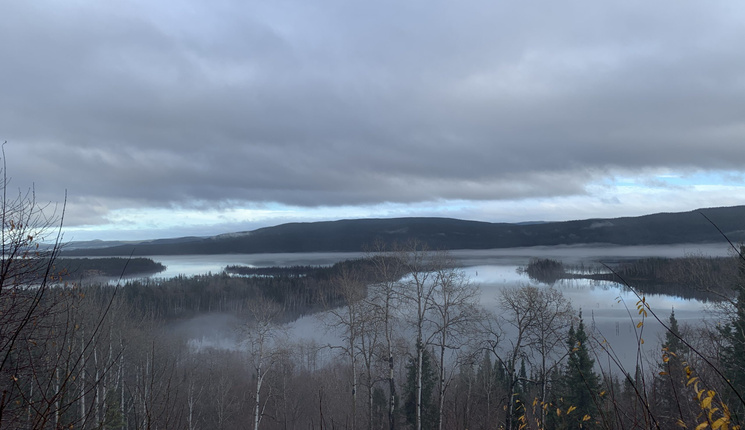 Stepping out of the truck at a rest area, we were greeted with winds which would give pause to a professional hurricane chaser, with an exclamation point of the realization this writer was the only living soul for several miles. Dozens, perhaps. It turns out our October sojourn was perfectly timed after the insects had vanished but before winter’s worst showed up to take residence for the better part of six months.

Challenges abounded for the road crew tasked with building firmament atop landscape which regularly turned the old dirt road into an oozing morass of deep ruts. Along this stretch, the final TLH section to be paved, crews dealt with passing through uninhabited and undeveloped wilderness country intersected by 150 watercourses ranging from small streams to large rivers. 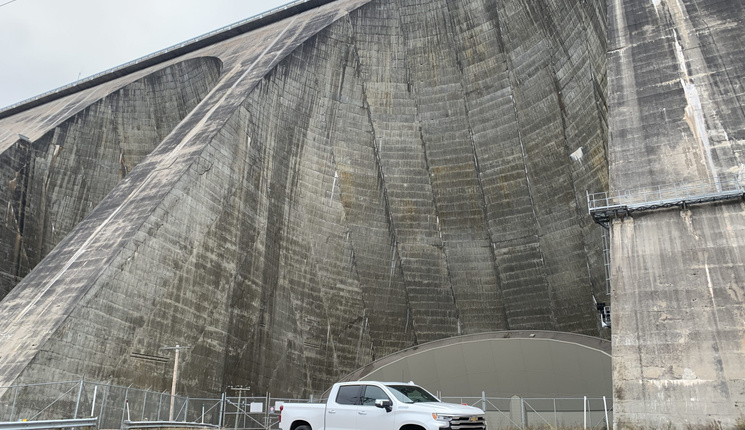 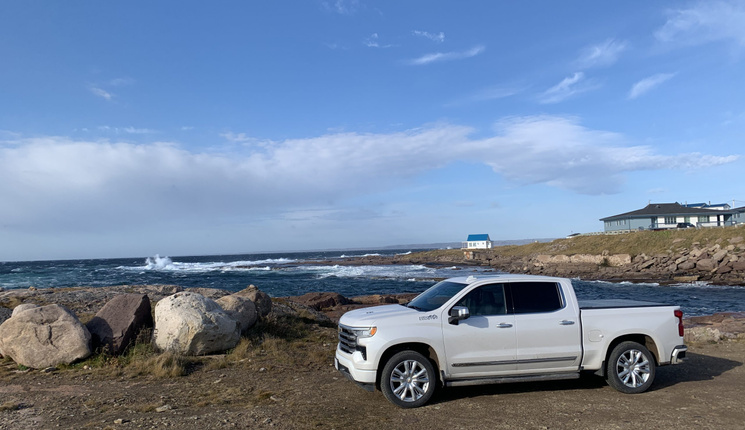 Environmental considerations used survey data from nearly 2,000 hydrometric depth soundings plus a hydrological study on tidal effects. Toss in concerns about crushing river and ocean ice and you’ve the type of landscape on which it is tough to build a seasonal dirt road, let alone a year-round paved highway with surfaces flatter than a billiard table.

Pristine pavement and punishing headwinds were constantly fighting against each other in terms of overall fuel economy. Powered by the 6.2L V8 engine making 420 horsepower and 460 lb.-ft of torque, the truck returned an indicated 12.1 L/100km (19.5 mpg) over the 3,500km drive. Chevrolet has done a dandy job of dragging the Silverado’s interior in line with its competition, complete with enormous infotainment screens packing dozens of camera views and the type of material quality once unknown to GM assembly plants. The cabin brims with unique storage spaces and does without look-at-me gimmicks like motorized gear levers. And if you can’t get comfortable on these seats, go see yer chiropractor.

One sign which may stand out to visitors making the loop through Labrador and back to mainland Canada through Newfoundland is a six-foot tall declaration which read “Moose: 2022 – 8, 2021 – 6”. This was not a score for the local high school hockey team but rather a stark reminder of just how many moose-vehicle collisions happen in this neck of the woods each year. Being alert, especially around dusk, is not an option.

Yep. These people are tough.